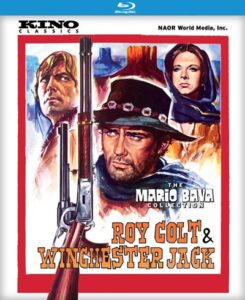 “Mario Bava hated Westerns.” So says Tim Lucas, the foremost authority on the director. Having written the much sought-after definitive tome on the filmmaker, Mario Bava: All the Colors of the Dark, best of luck to anyone looking to compete with him as the go-to Bava authority.

So then, why in bloody tarnation did Bava, primarily known for his visually charged Italian horror pictures (Black Sunday, Kill Baby Kill!, just to name a couple), opt to direct Roy Colt and Winchester Jack, a comedic send-up of the spaghetti western sub-genre? According to Lucas on his info-packed commentary track, when Bava found out that everyone else also hated this screenplay that they were stuck with, he supposedly literally chucked it and said, “Screw it, let’s have fun”. The result is a silly dust cloud of a film helmed by one of the most talented filmmakers of all time, a picture as meandering and freewheeling as it is nutty.

Charles Southwood (not to be confused with western hero Clint Eastwood – we’re assured that’s actually his name) is terrific as Winchester Jack. Jack, as morally dingy as he is, could probably be considered the lead character. He’s got the most screen time, and leaves the greatest impression, though declaring that he experiences any kind of character arc may be overstating things. He’s a sandy-haired numbskull for whom thieving is likely the singular career qualification on his unwritten or unconsidered resume. But, he’s got a roughshod charm that lends him a primary watchability factor. More-so at least than his titular cohort…

Brett Halsey plays the more valiant (by a few degrees, at least) Roy Colt, the well-meaning and relatively valiant half of the title duo. He’s been entirely too dim to realize he’s well-meaning and relatively valiant, meaning, he’s spent his years ’til now as part of a outlaw gang. His change of heart occurs in the early minutes of the film. He seems to have simply grown tired of spending his days with Jack punching each other in the face. He takes a job protecting a payroll wagon (or some such), which of course pits him against his former cohorts sooner than later. The joke of it is, when old buds Roy Colt and Winchester Jack are shooting at each other from opposite sides of the law, it’s still more civil than than their knock down-drag outs around the ol’ gang camp. The movie becomes a kind of Fox and the Hound situation – two friends on opposite sides of things, forced to face each other. Sans any and all drama, pathos, or cute furriness. 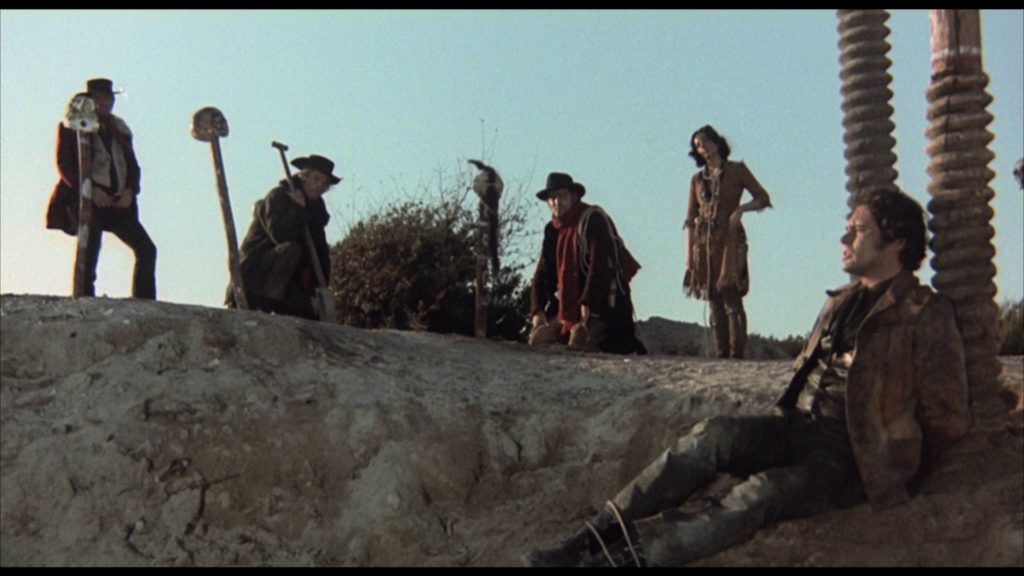 And there’s a woman. In this backwards and mixed-up world, it’s only natural that Manila (formidably played by Marilu Tolo) the most assured and staunch individual is the snatched-up native young woman. From the get-go, when Jack has to pathetically explain to her that if she doesn’t sleep with him (and only him) and then tag along with the gang to be his permanent companion, the guys will think less of him, she turns the whole thing into a lucrative financial enterprise. Every time Jack (and later Roy) approaches her for a little somethin’ somethin’, she fires back, “Marry me!” When they awkwardly buckle, she demands $10. And she swiftly gets it, handily upping the price for every single additional request. Never mind that the film is (sort of?) venerating prostitution, an approach that would only be viewed as increasingly problematic since this film was released in 1970, the fact that Bava and company succeed in playing this relationship and situation as some sort of warped feminist wit only adds to the craziness of it all. That Manila gets the last laugh should be no surprise whatsoever.

The whole movie makes frequent , though far from wall-to-wall, use of sight gags, several involving dopey sex scenes or non-sex scene fake outs. Nothing explicit, just some repeatedly thumping bedposts, most of which turn out not to be what you think. And there’s a gag with an amorous couple getting down to business completely inside a sleeping bag, as the whole thing inchworms it’s way across the desert. This is horror master Bava gleefully dancing into Benny Hill territory. Who’da thunk. 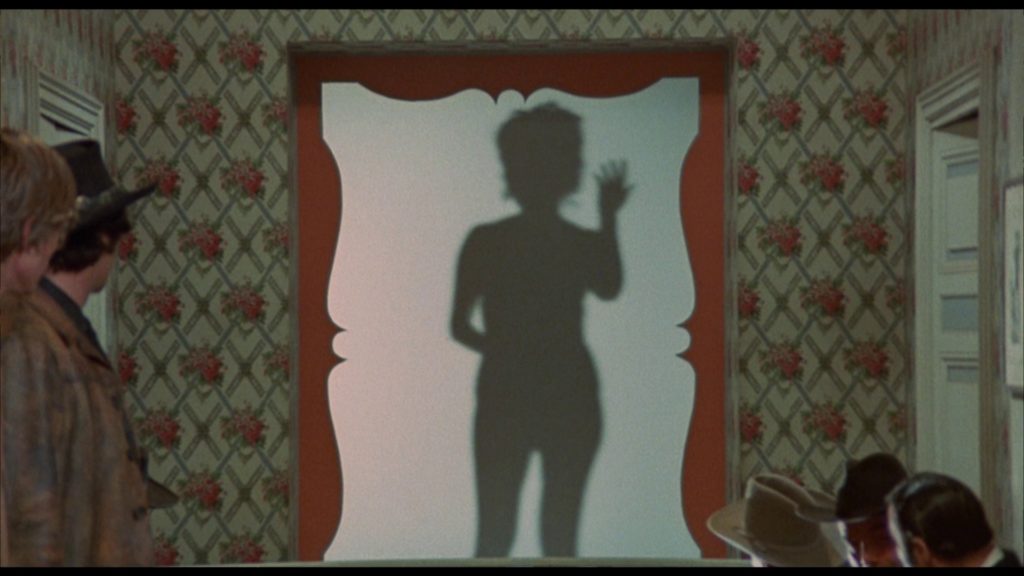 Bava, in this film particularly, plays his zoom lens like a trombone at times, which Lucas points out as not being altogether stylistically out of character. But in the odd instance of this spaghetti western/comedy, are these pronounced zooms a deliberate riff on Sergio Leone, he of The Good, The Bad and the Ugly fame? Indeed, it’s pointed out in the commentary track that a prominent side character is nearly a dead ringer for the famed spaghetti Western pioneer.

The cherry on top? The utterly ridiculous electronic organ music and goofy bossa nova musical score by Piero Umiliani (composer of Mah Na’ Man Na’). When one thinks of cool, dangerous spaghetti western music, this is the exact opposite of what comes to mind.

The big baddie of the story, though, is a boisterous nincompoop known only as The Reverend (played by an energized Teodora Corrà). Prone to irritable bowel syndrome and mustache twirling hyperbole, the biggest thing this villain ever steals are all his scenes in this movie. Whether or not that’s saying very much will depend upon your preference for spoofy mashups (through a late ’60s/early ’70’s filter no less). 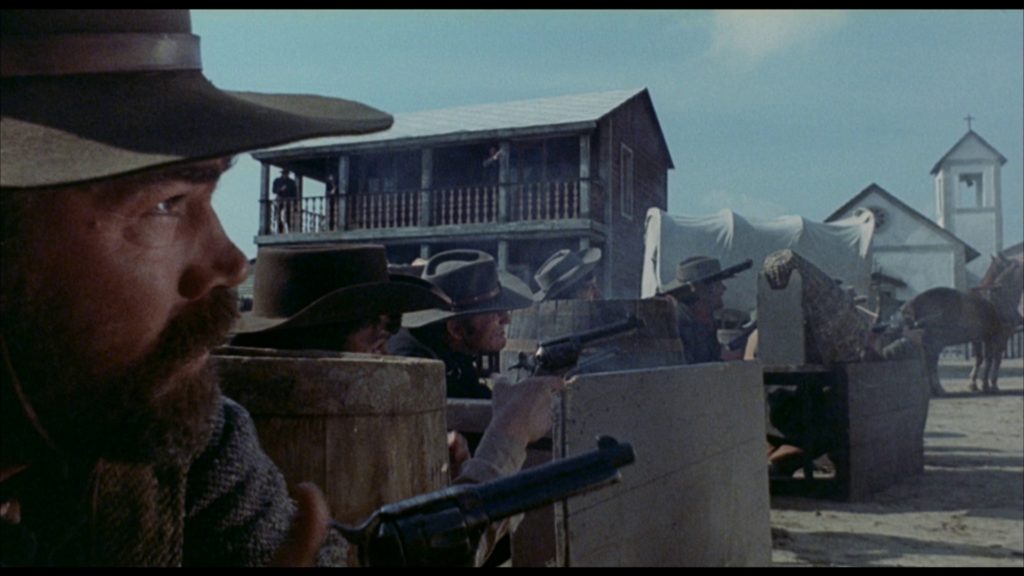 Kino Lorber has been releasing 2K upgrades of many Bava classics that were once upon a time put out on DVD by Anchor Bay. Back in the day, those two box sets were the absolute bee’s knees. Today, though, these blu-ray restorations aim to do them one better. Though still showing the film’s age and odd pedigree, this blu-ray release of Roy Colt and Winchester Jack makes for a fine upgrade for any Bava devotee. (And there are more than one might think!) Throw in the Tim Lucas commentary, and you’ve got yourself a piping hot plate of spaghetti western goodness. Or at least a chaser after taking in a few actual spaghetti westerns for context.

Every great director has his/her major and minor works. I’m no Tim Lucas (there can only be one), but I’d venture to classify Roy Colt and Winchester Jack as minor minor minor Mario Bava. Minor, if all the more weirdly enjoyable for it. It’s worth a shot, anyhow.