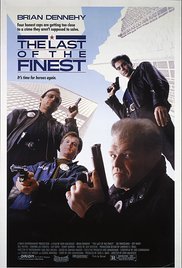 John MacKenzie’s The Last of the Finest, features a fine cast indeed.  Starring Brian Dennehy (First Blood, Tommy Boy), Joe Pantoliano (The Goonies, The Matrix, The Fugitive), Jeff Fahey (The Lawnmower Man), and the late Bill Paxton (Aliens, Twister, True Lies), it is the story of an elite unit of cops which was formed to work in conjunction with the D.E.A.  As a 1990 release, The Last of the Finest straddles the fence of 1980’s buddy cop picture, and very early 1990’s action film.

The redeeming aspects of The Last of the Finest is that they have a strong cast that makes this film fun, even though everything else is working against it.

The elite task force is a tight-knit group, as we see Officers Frank Daly (Dennehy), Wayne Gross (Pantoliano), Ricky Rodriguez (Fahey), and Howard ‘Hojo’ Jones (Paxton) hangout together at BBQ’s and parties near the beach with their wives, girlfriends, and even children.  A group that truly has one another’s back, they are also the rebels of the police force who do things “their way” and are able to do so because of Frank Daly’s tough-as-nails attitude and his close connections with a lot of the higher-ups like the Police Captain and the District Attorney. 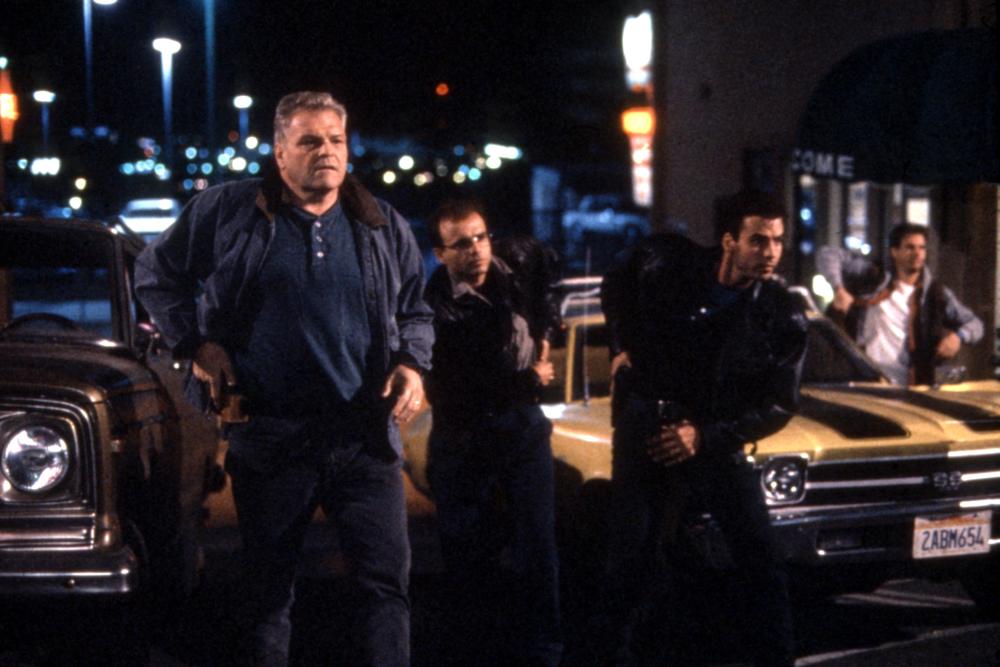 When one of their operations goes bad, and the D.E.A. isn’t there to back them up as they were supposed to be, the unit is put on hiatus by their superior officers due to all of the damage they’ve caused.  Still working some of their leads, however, they find themselves getting caught up in a much bigger plot that they were close to uncovering when their unit was put on hold.  When the death of one of their own costs Daly his badge, the rest of the unit resigns their badges in unison and then bands together to bring down the perpetrators, even if they are no longer on the right side of the law.

The tag line for this film is “It’s time for heroes again”, and while they are doing things for the right reasons, ultimately, it is a tough tag-line to believe since these are basically just vigilantes who have enough moral sense to do what is right.  The film of course tries to create some moral dilemmas to provide a temptation strong enough to test their resolve, but there is nothing in this film that isn’t telegraphed pretty early by the script.

Many would not expect this film to have a blu-ray release, and honestly, other than the cast, and the recent passing of Bill Paxton, they would be right as to any significance this might have.  The Last of the Finest is a blatant rip-off of Lethal Weapon in many ways.  Dennehy is the cop who is “getting too old for this” and often teases his future retirement.  There is the police camaraderie among partners who are involved in each other’s lives after the shift is over.  There is the DEA agents, including a blonde-haired one to watch out for, much like Gary Busey’s Mr. Joshua. Most egregious is the soundtrack composed by Michael Hoenig (Max Headroom Show), and Jack Nitzsche (Starman, Stand By Me).

Its not that the score is bad, but it basically borrows the saxophone wail and guitar riff that permeates every Lethal Weapon film, the first film which predates this one by three years, and sounds much better when David Sanborn and Eric Clapton are providing the saxophone and guitar parts respectably, and Michael Kamen is directing the orchestra. I found this extremely distracting throughout the film. 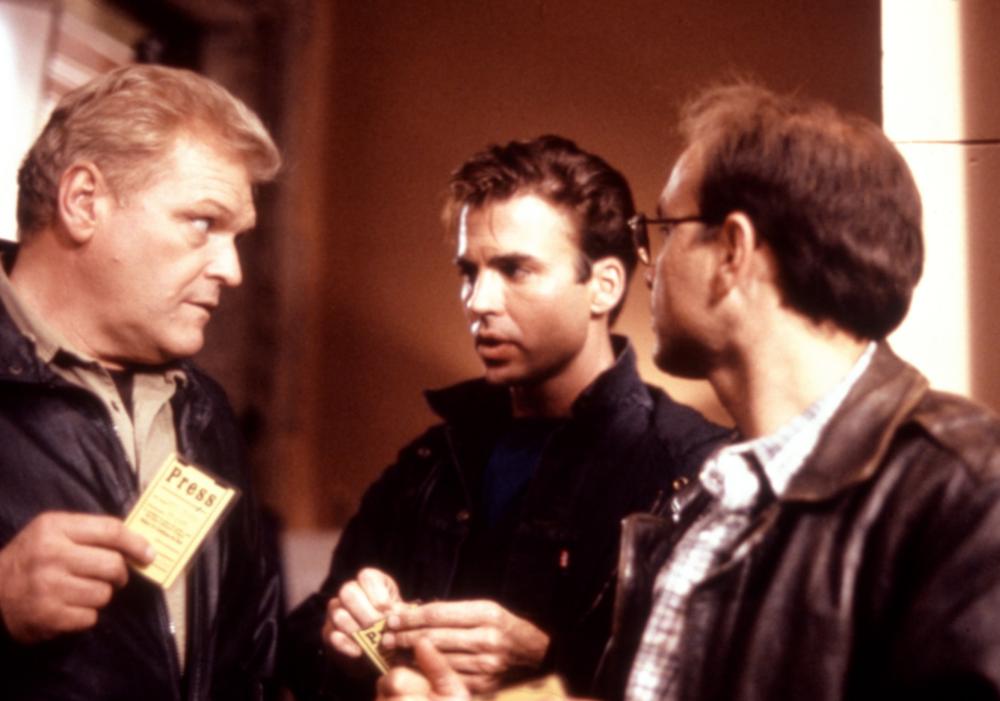 The villains are exactly who you guess them to be, though I’ll conceal that for those who probably haven’t seen this film and may want to let that be a surprise.  They are also rather wooden and flat.  The film tries to make you feel the stakes, but frankly it will be difficult for more sophisticated audiences to buy into the emotional arcs of the film, given how shallow the script handles everything.

The redeeming aspects of The Last of the Finest is that they have a strong cast that makes this film fun, even though everything else is working against it.  Either way, it now has a blu-ray release courtesy of Kino Lorber Screen Classics.

A few features are offered for this release from Kino Lorber.  There is an audio commentary by Steve Mitchell, the producer-director of King Cohen, and from film historian Nathanial Thompson.  There is also a trailers gallery featuring the trailer of this film, along with other films being released by Kino Lorber, such as Dennehy’s films F/X, and F/X2.  There are no subtitles or closed-captions, and the film is presented in color and runs 106 minutes.  It is presented in 1.85:1 and 1920x1080P. 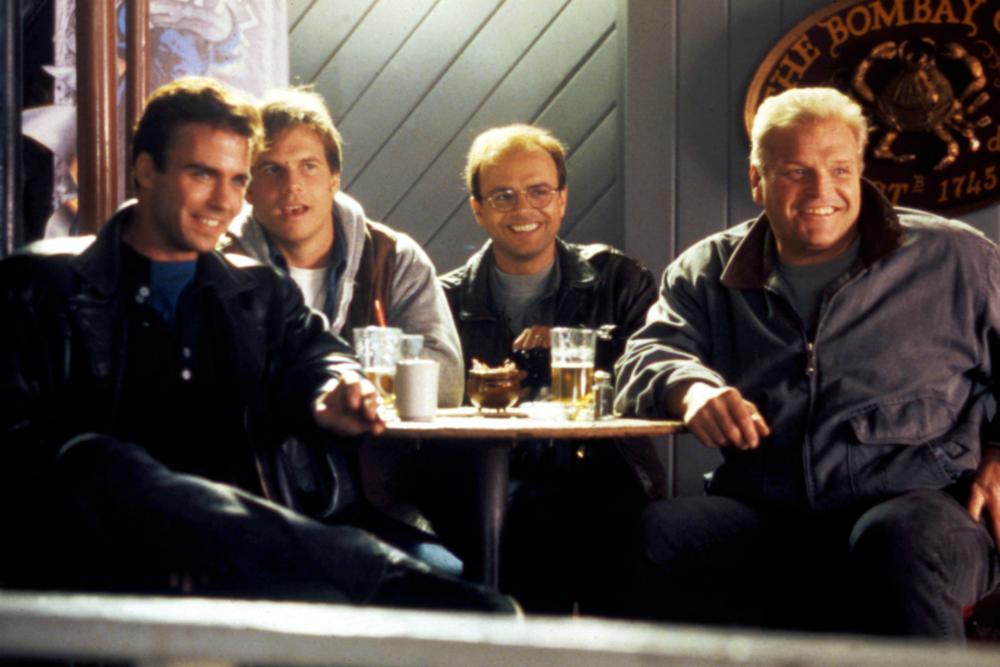