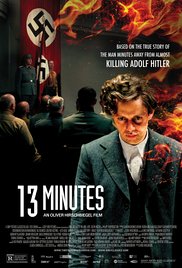 The title 13 Minutes tells the latest “based on a true story” tale of Georg Elser (Elser is the original title) who attempted to assassinate Adolf Hitler in November of 1939.  Previously, Georg Elser had been the subject of a film in 1989 titled Seven Minutes by Klaus Maria Brandauer.

While both titles have “minutes” in the title, the reason for this film’s title, 13 Minutes, is because that’s how many minutes came between Georg Elser’s hoped-for success, and his eventual failure.  Chances are that you have never heard of Georg Elser, but had he been successful in his attempt, history would be very different.

While the cast does a good job in their roles, providing layered performances that bring depth and complexity to their respective characters, they are victims of a very uneven script. 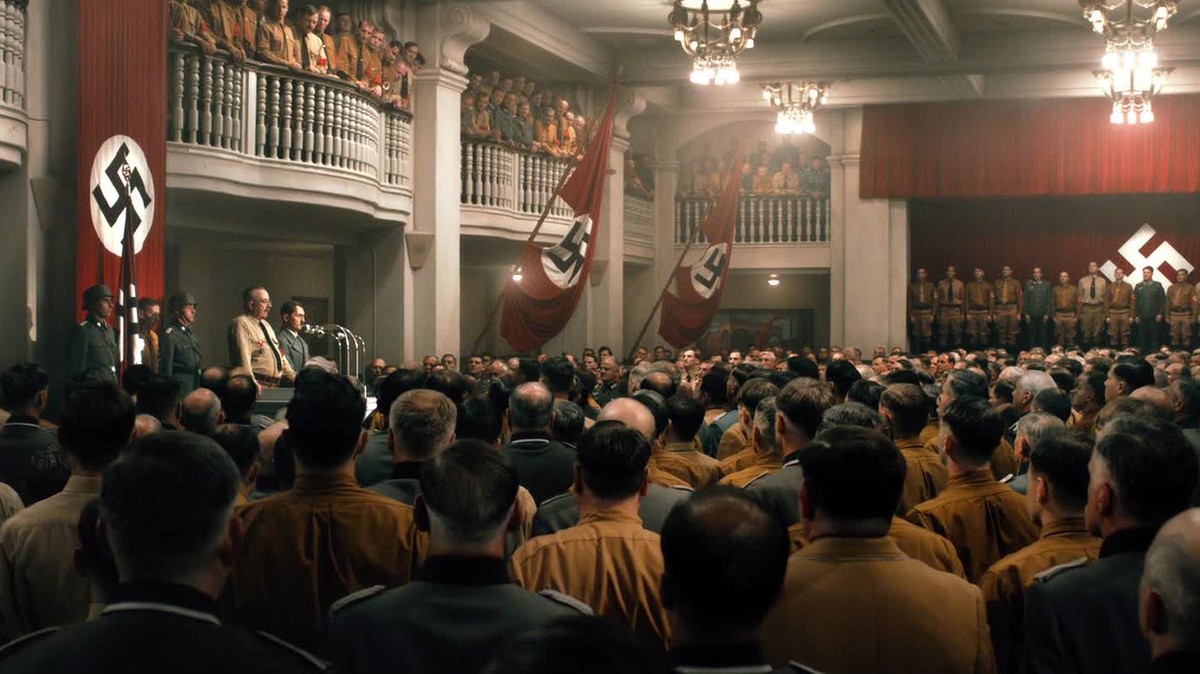 Georg is played by Christian Friedel, who provides a very sympathetic and mysterious figure, portraying Elser as someone who is honed in on his task of trying to “prevent even more bloodshed”.  The entire opening scene of the film is his attempt to take out Hitler and prevent him and his senior leadership from being able to carry out their evil schemes.  It turns out that Georg’s plan runs perfectly, even if it didn’t accomplish what he set out to do.

What Georg couldn’t know beforehand, however, is that Hitler needed to catch a train out of town at 9:30pm due to fog that prevented his plane from taking off, and had moved the start time of the event at the Bürgerbráukeller up by half an hour.  This would also cause Hitler to end his normal two hour speech after just one hour, leaving at 9:07pm, with Elser’s bomb set to detonate at 9:20. 13 minutes made all the difference between success and failure.  Historical documents state that had Elser been successful, not only would he have taken out Hitler, but also many of Hitler’s high command including Joseph Goebbels, Reinhard Heydrich, Rudolf Hess, Robert Ley, Alfred Rosenberg, Julius Streicher, August Frank, Hermann Esser and Heinrich Himmler.  History could have been vastly different. 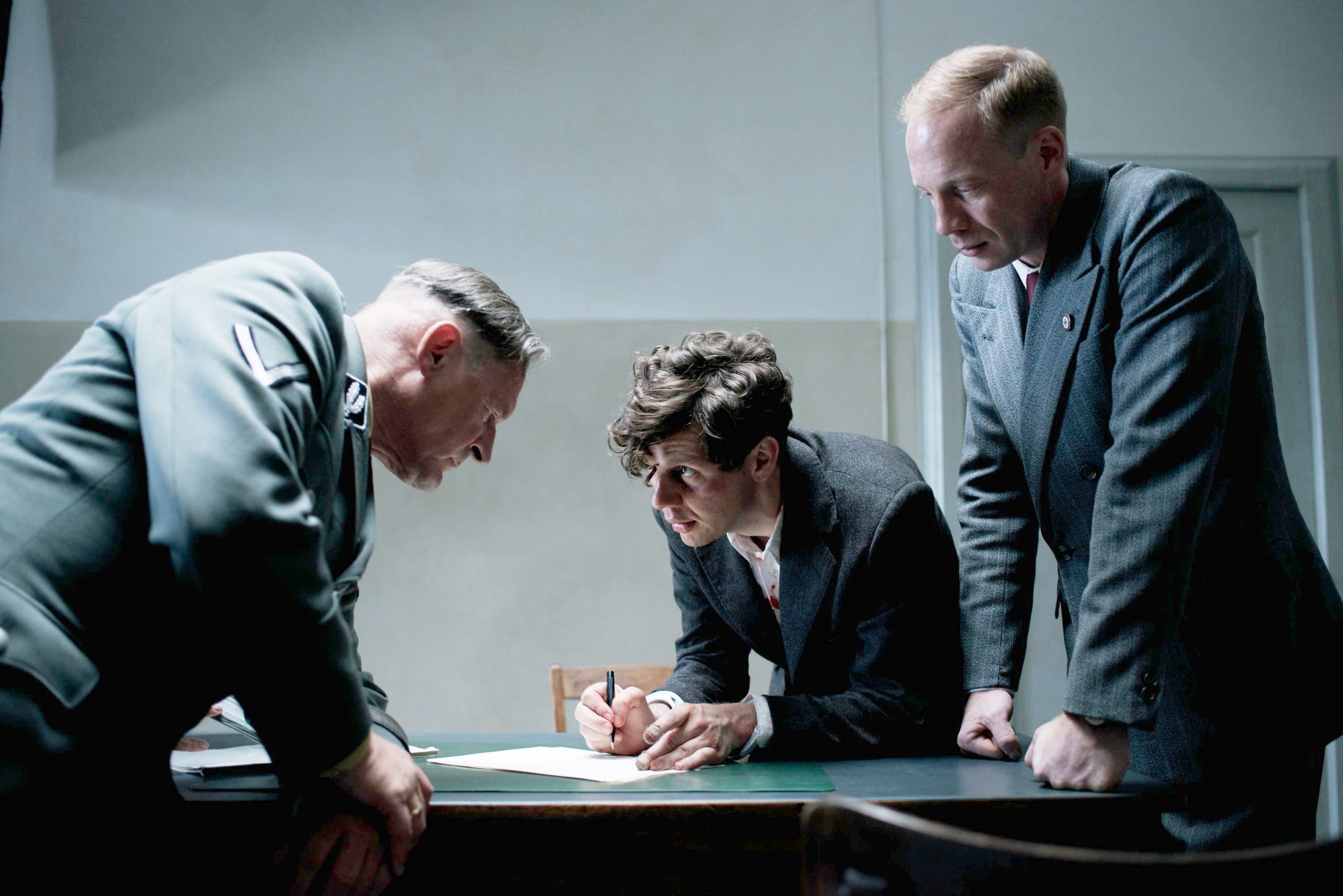 After Georg’s quick capture, the rest of the film takes place through flashbacks that are triggered through his numerous interrogations by the Nazis.  It is through these flashbacks that we are asked to piece together a composite of this man and decide if he is a man who is a part of the radical Red Front Fighter’s Association (RFB) which was known to oppose the Nazi party because of their Russian Communist sympathies.   Georg presents himself, in contrast, as a man who worked completely alone, living an almost double life where even his family, his lover Elsa Härlan (Katharina Schüttler), whom he rented a room from, carrying out their affair under the same roof as Elsa’s violently abusive and constantly drunk husband, and co-workers were unaware of his end goal.

While the cast does a good job in their roles, providing layered performances that bring depth and complexity to their respective characters, they are victims of a very uneven script.  The script was written by Fred Breinersdorfer, and his daughter Léonie-Claire Breinersdorfer.  With the assassination attempt already having failed in the opening moments of the film, it is very difficult to build any sort of momentum, or tension as a whole, since most people know that Hitler was not assassinated, as that has also been covered in several films about Operation Valkyrie, the most recent and high profile film being Bryan Singer’s Valkyrie starring Tom Cruise.  That is not to say that the script does not attempt to do this, occasionally finding moments of success, but it just is not able to consistently pull it off for the full running time.  Tension on whether Elsa’s husband will kill her or Georg if he discovers their affair, or Georg’s ultimate fate at the hands of his Nazi captors are effective, but not able to save the whole film from being regulated to a better on-demand type of film than something deserving of a large theatrical release. 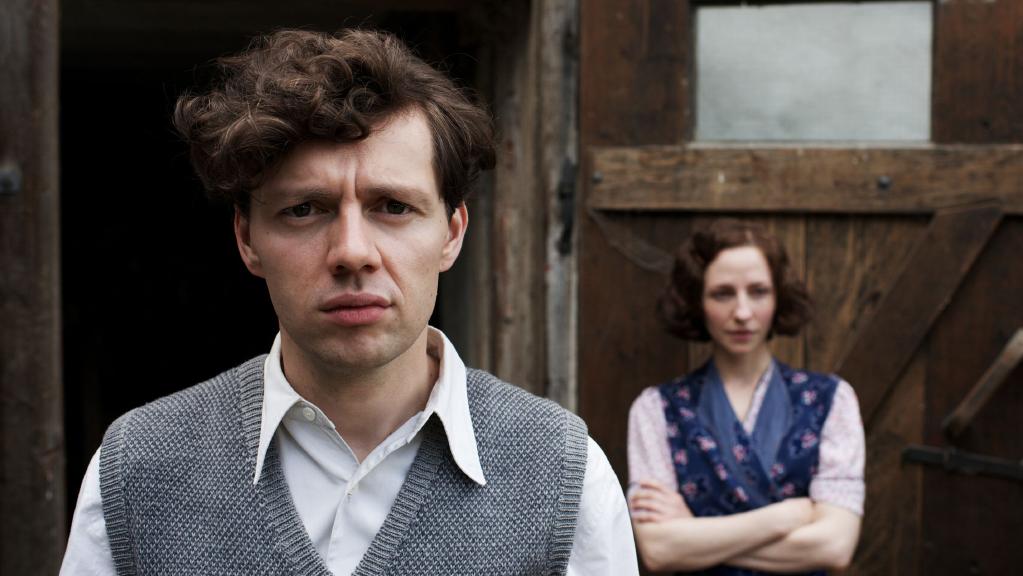 The more compelling moments of the film occur as Georg freely demonstrates his ability to make every part of the bomb that did denote killing many innocent citizens in attendance, including members of the orchestra who played for the event.  Georg is a man who won’t budge under some difficult to watch moments of torture as the Nazi’s seek to uncover what they believe to be a larger plot, ignoring Georg’s claim to have worked alone.  When they praise his bomb work, however, he is more than willing to show them everything which undermines the tension I mentioned.

The subject of the film, and the story itself are worth more exploration, however 13 Minutes doesn’t do enough to warrant this as a “must-see” film for its limited theatrical release. The entire film is in German with English subtitles.  It will open in limited theatrical release is some markets.  In Houston, Texas, it will open at the AMC Dine-In 8, downtown, formally Sundance Cinemas.