The War Lives On In John Boorman’s Brutal Tale Of Man v. Man 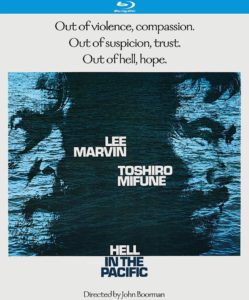 There’s only two guys in the entire movie, giving it the feel of a chamber drama, only set under the wide-open skies of a deserted Pacific island. And though they’re enemy combatants, and it’s World War II, and there’s the ever-present urge to shake the movie down to allegory-size in the memory, the real-time experience of watching it never descends into that didactic brand. That has everything to do with the work of the three leading men – Lee Marvin as a downed American pilot, Toshiro Mifune as a stranded naval captain, and John Boorman as the guiding directorial hand through the story.

It’s another Boorman special, his typically visceral, meaty kind of man v. man, man v. nature story, with testosterone coloring every scene and his usual muscular compositions drawing lines as strong as the two mighty personalities. For the movie-inclined, the primal conflict here evokes everything from Cast Away to Enemy Mine, from The Naked Prey to Lord of the Flies, and even Predator and, of course, Boorman’s own oeuvre, especially Deliverance and that narrative chopped salad of a revenge tale, Point Blank, also poster-faced by Marvin. In each, human nature is on trial under the bleakest of scenarios, with little hope of outside human aid, only the weapons of anger and prejudice available, and driven by the purest need for survival. Here, the two devolve to the point that they’d destroy their own home (the island itself) in deference to the world war raging far away. It’s military mandate as justification for mutual slaughter – the accepted default of nationalistic pride writ large.

But another mandate is in play, the need to see these two work it out. It’s slow but sure, until finally there’s mutual realization. Mifune is the first to recognize the need for solidarity against the elements – he does something about it by simply not killing Marvin when he has the chance. He’s the first to smile at the other, the first whose glimmer of circumspection shows he knows it’s only a matter of time before Marvin comes around to the same complacent stoicism about their situation. Mifune, the veteran of sixteen films directed by Akira Kurosawa, another master of energetic, philosophically-rigid, male-centered adventures, exudes his rare mixture of pinned-up violence and extraordinary wisdom, stroking his stubbly chin in the same manner as his character in Kurosawa’s Red Beard – there’s something irritated and wise about the movement, evoking as it does a lifetime of wearily negotiating life-and-death decisions.

On the other side of the line is Marvin’s blue-blooded American, all chest and glare, moving against his enemy not with the informed wisdom of ancestors, but with a single man’s assumption of power. It’s less pride than it is inborn entitlement – and we feel it rise up in ourselves the moment Marvin, who’s been strapped Christ-like to a beam of broken wood, flips the situation, now with Mifune loping about in ropes. We can’t help but choose sides. Boorman eschews subtitles to underscore the complicit allegiance both sides of the Pacific would feel.

But the inevitable truce occurs, and soon enough Marvin’s actually apologizing for spilling a drink on Mifune’s tattered shirt. In 1968, this eventual-peace-above-all trajectory probably played to the anti-war crowd, but must have seemed to the actual World War II vets in the audience (Marvin and Mifune both served in that war; Marvin was even wounded in a Japanese ambush on the island of Saipan) to be a majorly fictionalized soft-pedaling of the mission of the Greatest Generation to eradicate invasion at all costs. It’s possible to find an anachronistic, MASH-like, Korea-as-Vietnam application laid over what would have been to those men the ultimate justifications for their actions. But the final moments of the film avert any alternative interpretations, as the two, once delivered from the worst of their situation by forced camaraderie, come right back round to a hateful loathing that sends them packing in separate directions.

Kino Lorber’s Blu-ray is so clean it looks like the movie was made today but in the style of a movie from 1968. As bright as if it were struck an hour ago, yet decorated with tropes that place it in that era: quick zooms into angry eyes are a handy Leone leftover, while the great Lalo Schifrin score is as knife-sharp and angular as a lightning-smashed bamboo shoot, the whole thing looking in its spare, jungle locations and Panavision breadth like an oddly comfortable companion to its ’68 compatriot Planet of the Apes.

Cinematographer Conrad Hall runs with the opportunity to milk the natural beauty of the island. As we learn from the lengthy interview with director Boorman and the dense commentary by film historians Travis Crawford and Bill Ackerman, Hall was born in Tahiti, and understood the way light could be an all-enfolding blanket around placid nature. Shots of Marvin and Mifune, say, running through heavy island rain might be conspicuous in their back-lit beauty if it weren’t that the lighting and atmospherics are a necessary near-ironic counterpoint to the vicious hate pouring out like lava from these two lost warriors. It’s a surprisingly beautiful movie about the unkillable enmity of man that transcends such cheap epigrams with stripped-bare realism.