The Cannon Films Epic That Actually Was 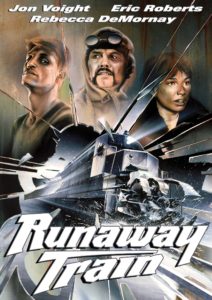 Based on a script co-authored by no less than Akira Kurosawa, originally intended to be the master Japanese director’s first color film after his 1965 medical epic Red Beard, Runaway Train finally reached screens 20 years later as the ultimate mid-80s Hollywood action flick. Directed by Andrei Konchalovsky, an early screenwriting collaborator of Andrei Tarkovsky (1960’s The Steamroller and the Violin, 1962’s Ivan’s Childhood, 1966’s Andrei Rublev), and fresh off his own decades-spanning dramatic epic Siberiade (1979), the unusually high pedigree of the material, its interpreters, and its realization came under the improbable aegis of none other than Cannon Films. 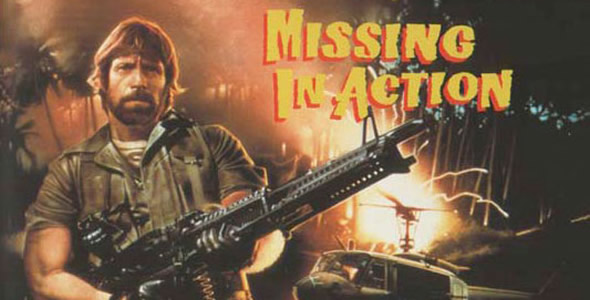 Best known for preposterous and overblown screen fare like the Chuck Norris actioners Delta Force (1986), Invasion U.S.A. (1984), and the inescapable staple of late night cable TV, Missing in Action (1984), Cannon was chiefly responsible, at least in my memory, for keeping the “video section” of rural convenience stores afloat through the ’80s and early ’90s with an unending stream of provocative and lurid cop revenge (Murphy’s Law, Cobra [both 1986]), military mayhem (the aforementioned Norris triptych), and martial arts sagas (beginning with 1981’s Enter the Ninja and culminating in 1985’s American Ninja). Besides giving my man Bronson a chance to glower, huff, and wheeze through his twilight years in the latter number Death Wish sequels (1982-’87), Cannon specialized, seemingly, in tempting youngsters to pluck up their courage, along with a greasy VHS title off an oily wire rack, in order to nonchalantly bluff the likes of Ninja III: The Domination (1984) past the checkout clerk (and their parents’ rental restrictions) for a stolen summer afternoon of way-beyond age-appropriate macho male posturing and gratuitous female nudity. 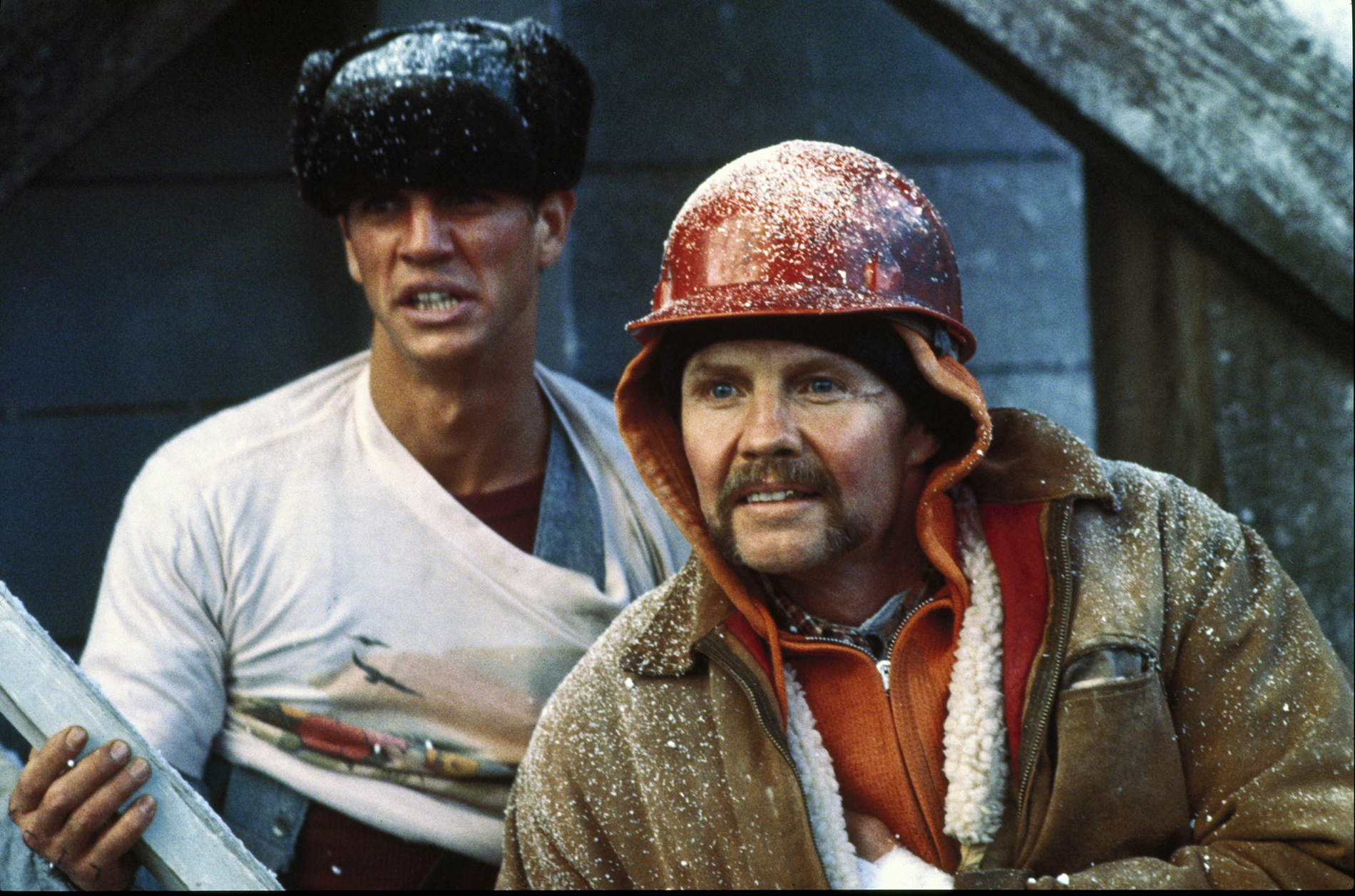 For fans of both art and trash, then, comes what may be considered, by a wide and diverse group of screen adherents, to be the perfect movie: 1985’s Runaway Train. Jon Voight, as dangerous prisoner Manny Manheim, and Eric Roberts, as welterweight boxer Buck McGeehy (drawling an entertainingly ridiculous Southern accent rarely attempted on film since Bette Davis “jest wash-ed mah hay-uh” in 1932’s Cabin in the Cotton), are a pair of convicts escaped from a maximum security north Alaskan prison whose liberating race for freedom, greased head-to-toe through narrow sewers and then surfacing up through the most inhospitable environments on earth, is cut spectacularly short when, soon after the railriders alight the titular mode of conveyance, the engineer croaks, the controls shatter and sever, and the rail-bound locomotive is death-hurtling in excess of 100 MPH through the Alaskan wilderness. In dogged pursuit of the escaped convicts is prison warden Ranken (John P. Ryan), whose undying grudge against Manheim amounts to a virtual Moby Dick/Captain Ahab-like obsession; but even as Ranken’s chase extends to being airlifted over the train by helicopter, Manny and Buck have found an unlikely ally in a female railroad worker, Sara (a credibly de-glamorized Rebecca De Mornay), who offers the cons a long-shot chance in stopping the runaway. 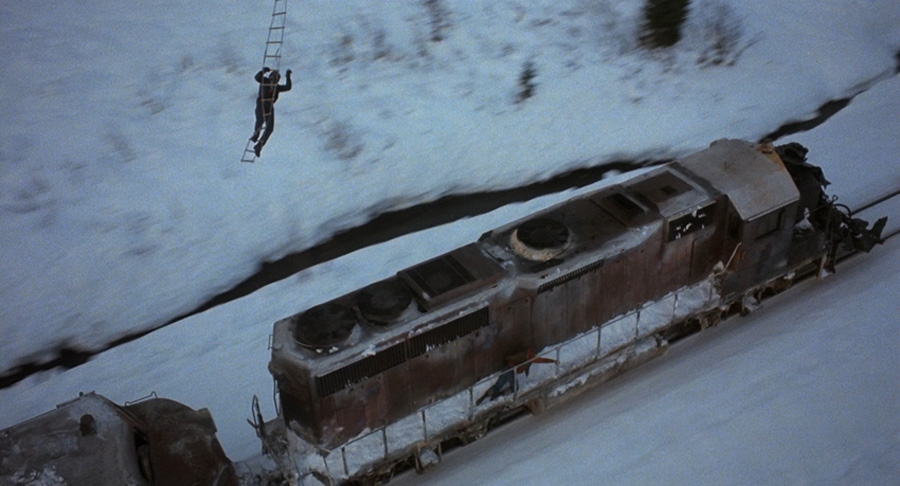 With B-level plot machinations and pulp characterizations given A-treatment by both its technical collaborators and its singularly committed performers, Runaway Train trots out every action cliché in the book – from the incessant pulse of the badass synthesizer score to the almost toxic level of masculinity that infuses every bone-crunching punch, body slam, and subzero rail-jump – towards their best possible fulfillment. It’s as if one of those vivid VHS covers of old actually lived up to the promise of its eye-shattering impact by being extremely well-crafted and even thoughtful, trenchant, and observant of its outre milieu. Special mention in this regard should be given to crime novel author, credited co-screenwriter, and co-star Edward Bunker (Reservoir Dogs), who appears early in the film as prison veteran Jonah, and whose real-life experience behind prison walls and bars undoubtedly lent authenticity to both the psychology of the characters and their violent, chaotic world. A scene soon after a prison riot, captured at a low angle by a steadicam tracking backwards, shows clench-jawed warden Ranken marching defiantly through the cellblock even as flames, drain pipes, and fighting erupt all around him. The final scene echoes the nihilism of that obstreperous promenade as the two great enemies ride off to their mutual doom. 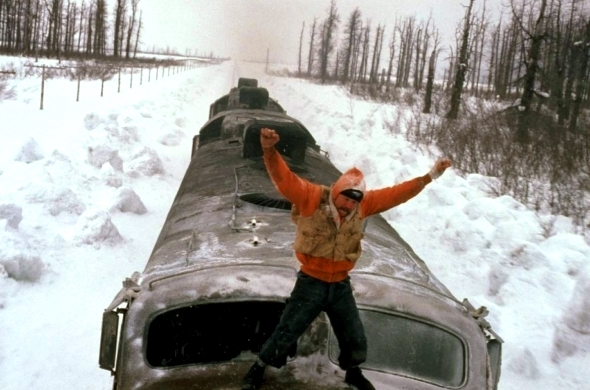 As, I’d venture, the only Cannon film to end with a quote from Shakespeare, while still containing a scene where a nerdy train dispatcher’s head is shoved into a toilet filled with self-spent urine, Runaway Train is admirably served by Kino Lorber’s “low-def” DVD release. As noted in my last KL DVD review, lower cost is literally the best selling point when compared to competing Blu-ray labels, and the visual quality, one should hasten to remind oneself, is still stretches of blurred Alaskan snowscapes ahead of anything that would have appeared immediately subsequent to the film’s 1985/86 theatrical run. Failing that, I’d suggest firing up KL’s DVD of Runaway Train for a fun, rip-roarin’ afternoon/evening/whathaveyou of vintage ’80s sleaze-art.

The images used in this review are used only as a reference to the film, or its era of film-making, and are not meant to represent the image quality of the DVD or specific contents of the film.