“The Devil Calls The Tune” in Alan Alda Satanic Horror 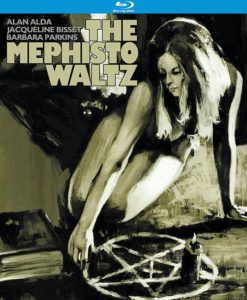 Being a child of the 1970s, and one who attended drive-ins over and over again that decade, drinking in with gusto a large number of skeezy horror films in the process, you’d think that The Mephisto Waltz, recently released on Blu-Ray by Kino Lorber, would be a title that’s right up my alley. But, believe me, even if you were sitting at the Moonlite Drive-In, wrapped in a 1971 Mustang and chomping on a concession stand corn dog, there’s no way that The Mephisto Waltz would satisfy you. It’s an entirely tasteless affair that would send you starting up the car and leaving the lot before the film was over.

First off, it’s such an obvious Rosemary’s Baby rip-off, it’s embarrassing. Alan Alda (yes—Alan Alda) assays the John Cassavetes role as an ambitious artist (this time, he’s a pianist, not an actor), who sells out his entire future by buddying up with evil, corpulent Curt Jurgens, who’s been deemed by the elites as the greatest pianist the world has ever known after his own deal with the devil. Jurgens is playing (or badly miming—lots of terrible piano miming here) his favorite piece, Franz Liszt’s devilish “Mephisto Waltz,” when Alda first visits Jurgens’ inevitably gothic-flavored mansion. Before we know it, Alda—in what is officially his worst performance–is all in; just like in Polanski’s film, there’s never a question. Satan’s offering me a deal? I’ll take it. 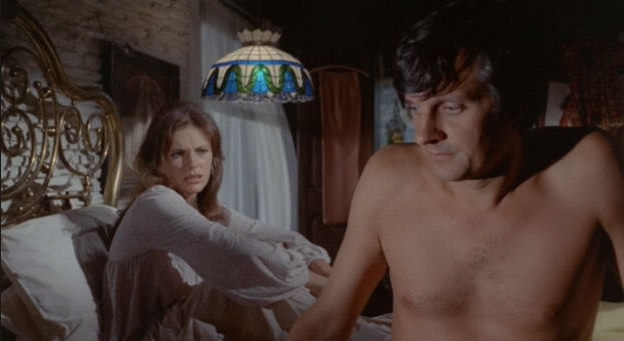 Meanwhile, at home, Alda is married to luscious Jacqueline Bisset, who’s so gorgeous that you can almost forget this movie is a dog. She lends the only note of class to it, even though she’s saddled with a character that’s so mean, she tells a ringing bell on a shop’s door to “Shut up.” Bisset and Alda (argh, what a terrible pairing) have a daughter that they barely interact with, played by Pamalyn Ferdin, who you might remember as the young girl who discovers Clint Eastwood’s badly damaged Civil War soldier in Don Siegel’s The Beguiled; if you listen to her distinctive voice, you might also recognize her performance as Lucy in A Boy Named Charlie Brown and as Fern in the 1973 animated version of Charlotte’s Web.

Ferdin appears in the film’s first scene, taking an ominous phone call, but by the middle of this poorly constructed film, we still haven’t learned who she is. By the time she has to pay for Alda’s ambition with her life (she’s gets a deadly blue dot painted on her forehead), we barely realize that she’s this man’s daughter. Bisset, too, barely registers sorrow for her daughter’s death, as she goes on to have an affair with doomed lawyer Bradford Dillman. But, hey, this was the 1970s, and we all know that parenting wasn’t a big issue back then. Even dully menacing doctor William Windom (this film’s Charles Grodin stand-in) doesn’t shed a tear for the dead little girl. 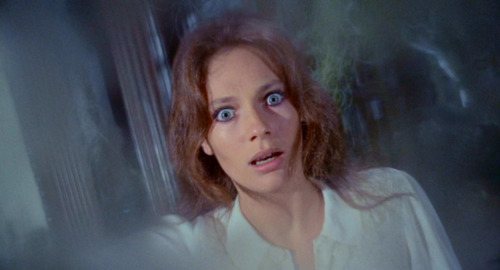 Bisset is concerned about her husband’s diversions with Jurgens, and so they attend a costume party at his estate, and here we get a stunningly ugly display of the worst of ’70s garishness, complete with the sight of Jurgen’s snarling black labrador (officially among the least threatening dogs out there) being led amongst the partygoers while wearing a human mask on its head. It’s a stupid image, but in the realm of this film, it also happens to be its most creative offering.

Of course, the labrador turns out to be a killer, and so, as this is a horror film, the dog has to die, and it does, with a knife in its chest, in the film’s most repulsive scene. Seriously, couldn’t the filmmakers have gone with a more menacing beast? Dobermans were big back then. Anyway, most of the scenes that are meant to scare us are purple-tinted dream sequences liberally dosed with with fish-eye lens shots irritatingly smeared with blurring Vaseline. Being a film commanded by music, you’d think that the score would at least be memorable. But here we have the masterful Jerry Goldsmith delivering perhaps his most screechingly discordant work ever. This film is a “Quinn Martin Production” and that means that it comes from a producer more famous for his TV work than for the movies, and so it’s no surprise that The Mephisto Waltz, with its ho-hum “surprise” ending, feels like a lower-entry into the Night Gallery sweepstakes. 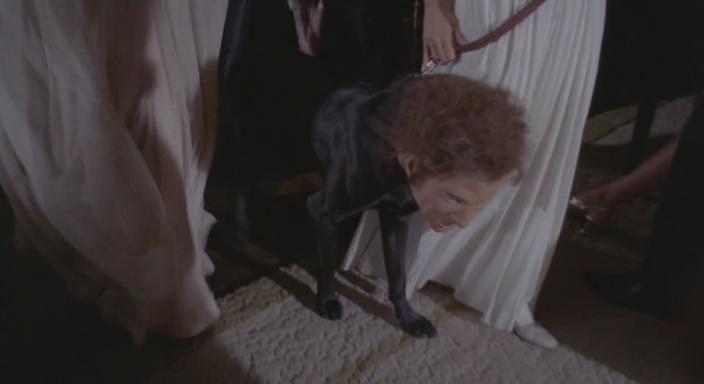 And then we have the disgusting love scenes between Alda and Bisset. Seriously, the filmmakers should have realized that no one as goofy as Alda could have landed a woman like Bisset, no matter how talented he is. And let’s just keep it nice and say he’s not in the least appealing in the sexy bits. I should mention that Barbara Perkins jazzes things up as a witchy true believer. But wow, this a terrible movie. I know some people LOVE terrible movies—this seems to be an affliction that particularly plagues horror movie fans—but this one is impossible to adore. The appearance of dreck like this onto the Blu-Ray scene is a sign that only tasteless horror movie fans are buying Blu-Rays these days. This one comes with a commentary that takes this hideous film way too seriously.

The images used in this review are used only as a reference to the film and do not necessarily reflect the visual quality of the disc.