Worthy Space Horror?  Not in This Life. 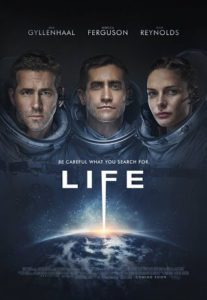 Dr. David Jordan (Jake Gyllenhaal) doesn’t miss Earth. He’s been on board the International Space Station for over a year, setting a record. He gets along well with the rest of his crew. There’s Hugh Derry (Ariyon Bakare), Katerina Golovkina (Olga Dihovichnaya), the no-nonsense Dr. Miranda North (Rebecca Ferguson), the wisecracking Rory Adams (Ryan Reynolds), and a father-to-be; Sho Kendo (Hiroyuki Sanada).

In what winds up being Alien warmed-over, Life is a story about a murderous alien that just doesn’t add up to much.

Most of the decisions made by this six member crew of the International Space Station featured in Life seem pretty sound. When they capture a probe returning from Mars with soil samples that they believe may contain the first evidence of life beyond our planet, they have all sorts of safety procedures in place. Their first priority is making sure they are safe and if they come across anything dangerous, they are committed to it not reaching Earth.

Living is easy with eyes closed – but not in a space suit.

Extracting a spore-like sample from recovered Martian dust, they proceed to monitor and interact with the lifeform, dubbing it “Calvin” and eventually shocking it with electricity. This situation does not end well for the crew of the ISS. Starting with a mouse that was on the space station for some reason, Calvin starts killing, changing and growing larger with each kill.

Calvin’s metamorphosis is far more interesting than the humans he’s dispatching. We don’t have any time to get to know our crew, so when Calvin starts killing them we don’t care. In what winds up being Alien warmed-over, Life is a story about a murderous alien that just doesn’t add up to much. Once the movie started giving us monster point-of-view shots, I thought Life would embrace its B-movie potential. Instead, it doubles down on its dour tone, not allowing for any campy fun.

Stilted dialogue, poor creature design, and Jon Ekstrand’s overwrought score are some of the problems plaguing this movie. I’m at a loss as to why Jake Gyllenhaal or Rebecca Ferguson would sign on to make this glum film.

In his film Safe House (also starring Ryan Reynolds), director Daniel Espinosa featured fight scenes that were more realistic than most seen in action films. In Life he makes the ISS crew’s space exploits seem more realistic and workmanlike than is usually seen in sci-fi films. It’s a shame the script he was working with offers nothing new to the terror-in-space genre.

As of this writing, Life is the title of ten other movies, four television series, two magazines, one popular family board game, and Rolling Stones guitarist Keith Richards’ memoir. All are more memorable than this film.