In conjunction with our January 2017 edition of “Film Admissions”, which is devoted to director Steven Soderbergh, I’ve brought back my opening weekend review of his virus-based horror film, Contagion.  At the time of this review, Soderbergh’s threatened self-imposed “retirement” from feature filmmaking was already a topic of discussion in the entertainment press.  Let us now put on our respirators, and step back to Fall of 2011… 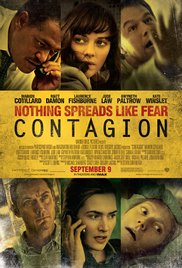 TWO YEARS AGO: Director Steven Soderbergh, a mainstream-friendly artiste of a filmmaker if there ever was one, has his version of the true-life inside-baseball chronicle Moneyball shut down by the studio just days before shooting was about to commence. He is told his take on the screenplay was not what the studio agreed to, and not worthy of the $58 million budget. The plug is abruptly pulled, the message no doubt being that even a versatile Oscar winner like Soderbergh can’t be artistically trusted in Hollywood anymore. The stakes are just too high.

In a perverse way, Contagion is almost like a Steven Soderbergh mix tape, with all his favorite themes and tropes.

LAST TUESDAY NIGHT: Upon seeing Contagion, Soderbergh’s first major Hollywood picture since the “Moneyball” debacle, I have to wonder how much of the this virus-centric film is actually a well-disguised harsh criticism of the business of movie magic. After all, the director does seem awfully pre-occupied with casting big name movie stars to kill off via a rotting virus throughout the movie. Could that be a symbol of the rotting face of Hollywood itself, infected with an unstoppable epidemic of soul-killing greed?

And then there’s the origin of the Contagion virus itself, a chain of events involving a bat, a palm tree, a pig, a butcher, Gwyneth Paltrow, a camera, and a casino. Aside from maybe the bat (is there a bigger entity in Hollywood than a certain caped crusader?), do I really need to pause and dissect the metaphors I’m seeing? It all solidifies my theory that Steven Soderbergh’s Contagion is more than just a virus movie – it’s a lashing out at the hand that feeds him – one he can’t actually bite, since it’s, you know, infected. 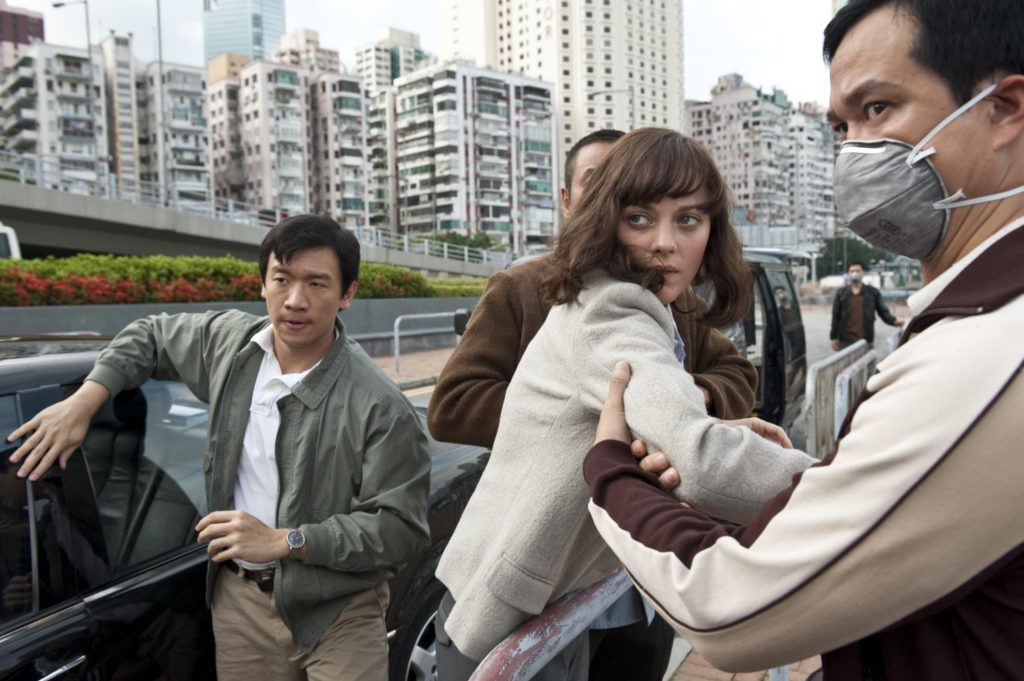 OPENING WEEKEND:  I’m looking into the future here, but I’m guessing that Contagion will do pretty well for Warner Brothers and Soderbergh. There’s just something about a virus movie – every ten years or so, audiences can’t resist a good germophobic freak-out. For most people, that’s exactly what they’ll get. The directorial protest angle won’t occur to them, since most moviegoers still probably don’t know who Steven Soderbergh is, despite all of his success. No, they want to see movie stars die painful, medically perplexing deaths while the world goes berserk all around them. And Soderbergh is no fool, that’s exactly what he gives them.

Granted, in keeping with what I said before, Soderbergh really doesn’t seem to be interested in an unstoppable virus that will kill everyone. And to be fair, it definitely isn’t completely about secretly indicting Hollywood for him, either. In true Soderbergh fashion, he’s very interested in human processes. The processes of government, of bureaucracy, of science, what have you. The rule constructs of societies, and how individuals are affected by having to move within those agreed-upon parameters. Hence, we get plenty of scenes with CDC officials debating the merits of when to release certain information, and how best to handle to the breakout. 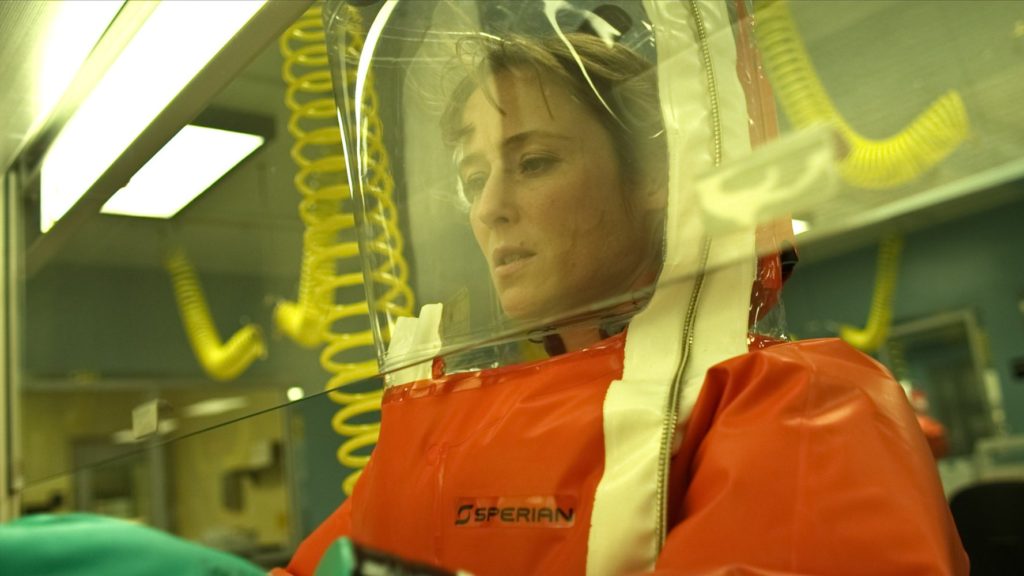 ELEVEN YEARS AGO:  The satisfying double-whammy of the probingly international and experimental Traffic, and also the mainstream edgy Erin Brockovich set the tone for Soderbergh’s working pattern for the next decade. He would operate under the old “one film made for them (the studios), one for me” model, although with a twist only a hipster artist could bring. It was clear that Soderbergh was a true artist while also harboring a genuine appreciation of classic Hollywood & global filmmaking, right up through the 1970s. He netted two Best Director Oscar nominations this year for the afore-mentioned films, winning the coveted statuette for Traffic.

Unfortunately, this would also mark the end of an unmitigated hot streak for him that began in 1998 with Out of Sight. The divide between the “artsy” Soderbergh and the “mainstream” Soderbergh would only grow more pronounced in the years to follow, as he would alternate between Ocean’s sequels and obscure micro-efforts such as Bubble and The Girlfriend Experience. By Ocean’s Thirteen it was clear that our interest, and his own, was waning on the mainstream side. However, Soderbergh himself maintained that even a film that effectively walked the commercial line like 2009’s The Informant! wouldn’t be possible in the marketplace of 2011, a landscape irreversibly contaminated with 3-D giant robots, young wizards and Batman. 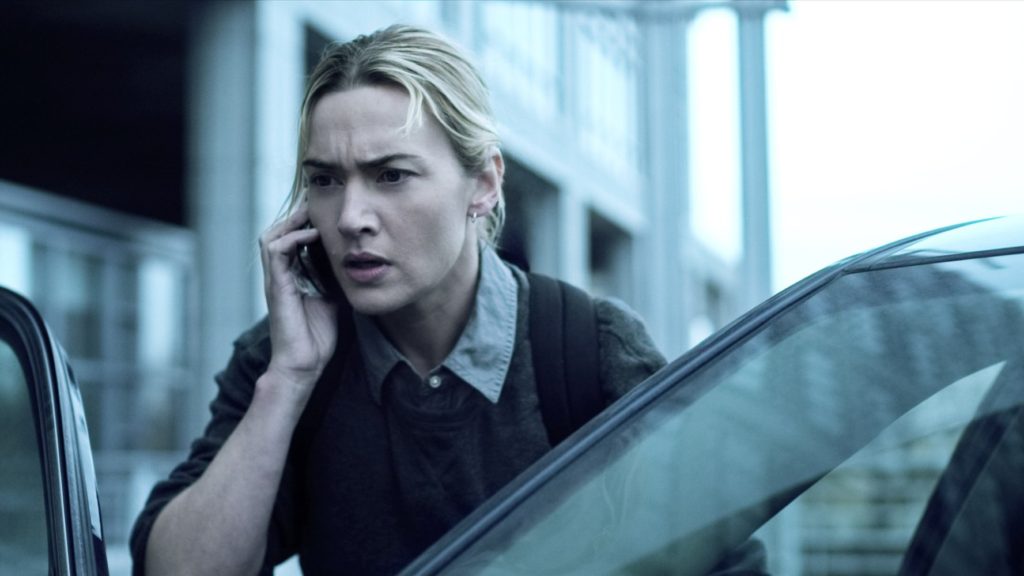 LAST WEEK:  The press announces that Soderbergh, fed up once and for all, is quitting filmmaking to become a painter. The announcement is well timed, as Contagion hits theaters in less than week. Apparently the filmmaker feels that having exposed the virus, he’s now free to move on. But hold it…! Before his Cartman-esque declaration of “Screw you, I’m going home!” can fully resonate, he announces soon after that he is in fact NOT quitting the movie business forever – he’s just taking a break. Whew! Glad we got that all cleared up.

NOW:  So what about Contagion? It’s okay. More than okay, really. In a perverse way, it’s almost like a Steven Soderbergh mix tape, with all his favorite themes and tropes. It’s all over the globe, it has that early 1970s feeling of cinematic paranoia, it’s got a compelling ensemble cast stocked with familiar faces, and it has multi-layered characters debating the best course of action through bureaucratic exchange amid a high pressure situation. He even served once again as his own cinematographer under what has to be Hollywood’s worst kept secret pseudonym, Peter Andrews. All that’s missing are several noticeable visual shifts in film stock and George Clooney. It would actually make for a decent final film if not for the bitter undercurrent permeating the whole thing. 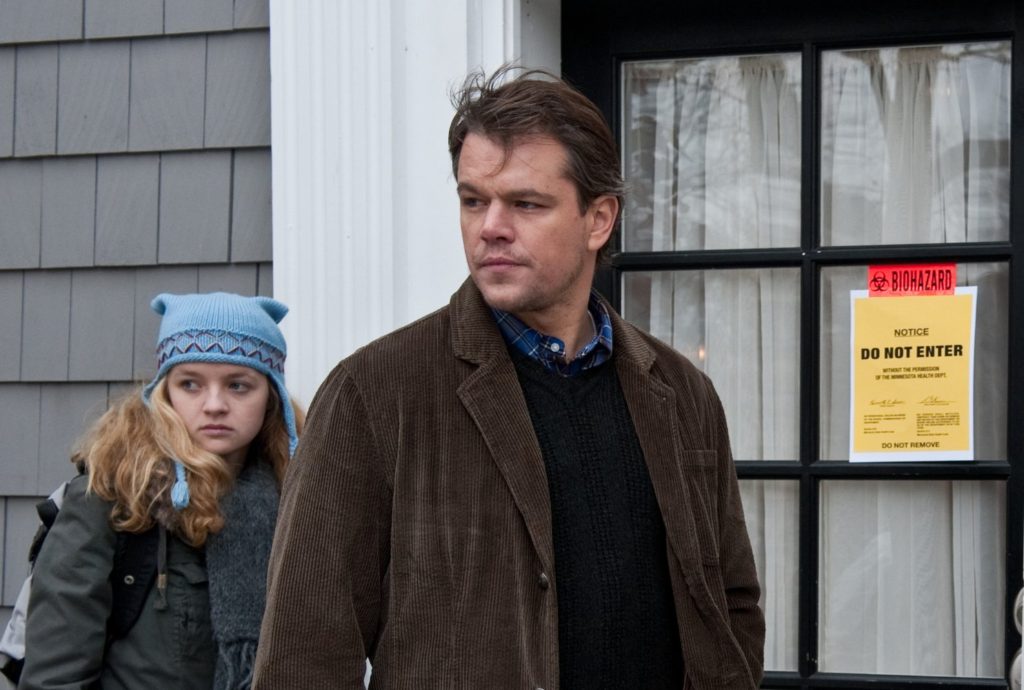 Of the impressive ensemble cast (which includes Kate Winslet, Laurence Fishburne, Marion Cotillard, John Hawkes, and Elliot Gould, among others), the two standouts are Soderbergh regular Matt Damon as the virus-proof husband of the doomed Gwyneth Paltrow, and Jude Law as a truth-saying blogger falling into the fringes of society. While Soderbergh seems to have the good courtesy to spare his pal Damon a horrible death, it’s clear that the director is most identifying with Law’s character. In the first part of the film, Law’s blogger is turned away by the conventional media (which is okay, since Law angrily informs them that print media is dying), and embarks on a one-man crusade to proclaim a cure. How effective, and how lucrative such an endeavor would be are a few of the notions that “Contagion” really seems to enjoy wrapping itself up in.

TWO WEEKS FROM NOW:  Moneyball hits theaters. Granted, it’s not the Soderbergh version, but the fact that such a tormented project that lacks heavy commercial appeal (particularly outside the U.S.) could overcome the hurdles it’s been faced with is reason enough to believe that Hollywood will find a cure for what ails it.  Contagion begrudgingly seems to know this, even amid all the end-of-the-world chaos and looting that eventually overtake society within the story, ala a good Romero zombie tale. Soderbergh may not be happy with the state of his profession, but he’s still managed to do what he did so well during his glory days of eleven years ago – make a commercially viable piece of cinematic art. And if that’s the cure to Hollywood’s virus, then be sure to catch Contagion. 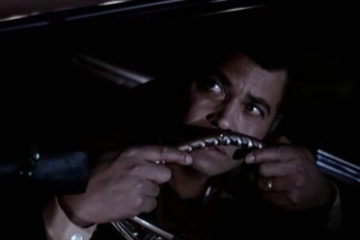