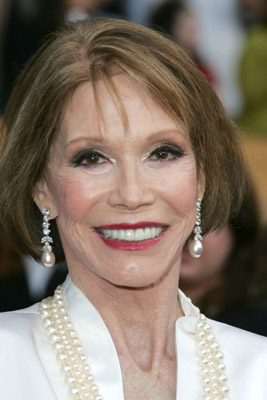 Having inauspiciously began her career as an unseen receptionist in a now forgotten private investigator drama, visible only by her shapely legs, Mary Tyler Moore rose to full view in two of the most successful situation comedies ever made, eventually building a television empire that dominated the medium for two decades. It is absolutely no understatement to say that this woman changed TV forever.

As the stay-at-home wife of TV writer Rob Petrie on The Dick Van Dyke Show, “the girl with three names”, as dubbed by series creator Carl Reiner, similarly made an impression within a few episodes of the show’s premiere from the waist down — this time clad in form-fitting capri pants. Breaking conventions of 1950s family comedies like Father Knows Best and Leave it to Beaver, Moore as Laura Petrie eschewed the longer skirts and costume jewelry, and not to mention the stiff demeanor, of her TV forbears for a more realistic and relaxed portrayal of a suburban mom.

Opposite series star Dick Van Dyke, theirs was a warm and humanly believable relationship that achieved an intimacy that had not been seen on small screens to that point. In addition to giving Mary Tyler Moore ample opportunity to display her considerable prowess as a professional dancer (a detail that was added to her character when Moore was cast in the show), the character-driven sitcom featured strong, independent-minded women like Laura, along with Rob’s writer’s room co-worker Sally Rogers (Rose Marie), who were as vital to the show’s success as, and dramatically (and comedically) on equal footing with, their male co-stars played by Dick Van Dyke (as Rob Petrie) and Morey Amsterdam (as Buddy Sorrell). 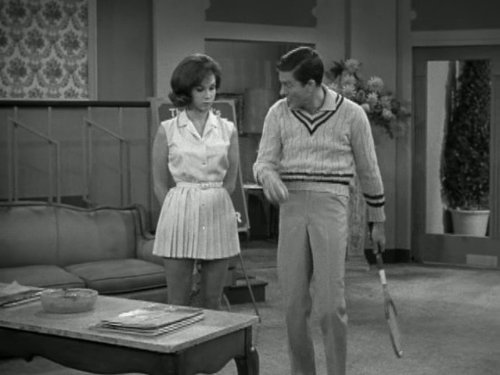 Four TV seasons later, Mary Tyler Moore would be back with her own eponymous sitcom, The Mary Tyler Moore Show. As innovative as The Dick Van Dyke Show had been, The Mary Tyler Moore Show broke new ground by simply featuring a single, independent career woman as its main character. Unprecedented on television upon its September 19, 1970 debut, Mary Tyler Moore as Mary Richards navigated the worlds of broadcast journalism and personal relationships over the next seven seasons, providing the template for every workplace comedy — from The Bob Newhart Show to WKRP in Cincinnati (both would be produced by Moore’s MTM Enterprises) — that would follow.

The Mary Tyler Moore Show achieved a warmth and realism in its whip-smart writing, construction, and tonal consistency that had never been achieved on the small screen. In short, it was television’s first true masterpiece. 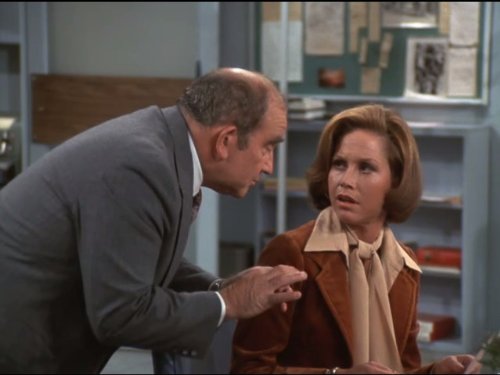 With Edward Asner on THE MARY TYLER MOORE SHOW

Parlaying these successes to her production company, MTM Enterprises, founded with then-husband Grant Tinker, Mary Tyler Moore co-headed a television mainstay whose roster would include The White Shadow, Hill Street Blues, and St. Elsewhere, among many other acclaimed programs of the 1970s and 80s. Never quite finding her footing on the big screen, she nonetheless did play opposite Elvis (as an undercover nun in 1969’s Change of Habit), and offered a brilliant, Oscar-nominated performance as the cold-hearted mother in 1980’s searing drama Ordinary People. (She is also hilarious as Ben Stiller’s outrageous adoptive mother in 1997’s Flirting with Disaster.) But for her lack of apparent interest in the big screen, Mary Tyler Moore virtually embodied a medium that allowed its millions of living room audiences to know her as intimately as few performers allow themselves to be known: as the woman who could turn the world on with her smile.