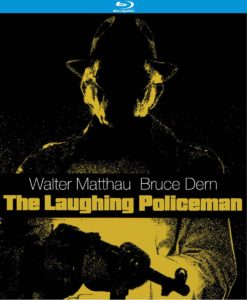 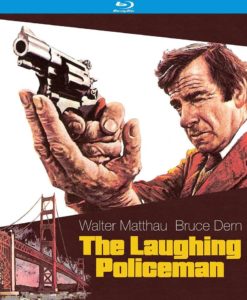 With reversible cover art featuring, on one side, a faceless killer in shadowy black-and-yellow relief holding a menacing sub-machine (or “grease”) gun, and, on the other, an illustration of a squinty-eyed San Francisco policeman (in droopy-faced Walter Matthau) two-handed gripping a snub-nosed revolver, it is interesting to note that the two figures representing the title The Laughing Policeman seem ill-chosen to suggest any form of levity whatsoever – including irony. Based on a 1968 Swedish thriller by Maj Sjöwall and Per Wahlöö, the fourth in a popular series featuring the dour and depressive detective Martin Beck, director Stuart Rosenberg’s (Cool Hand Luke [1967], The Drowning Pool [1975]) The Laughing Policeman retains the title of the novel but transports the action to San Francisco and changes the name and nationality of its central detective figure to an American cop named “Jake Martin”. Sharing above-the-title credit with ’70s screen dynamo Bruce Dern, who plays Martin’s newly-assigned partner Leo Larsen, The Laughing Policeman becomes less about the title character and more about the livelier personalities he’s surrounded by, along with the changing face of the city he’s immersed in, as a world-weary, ultimately past-concerned police veteran. 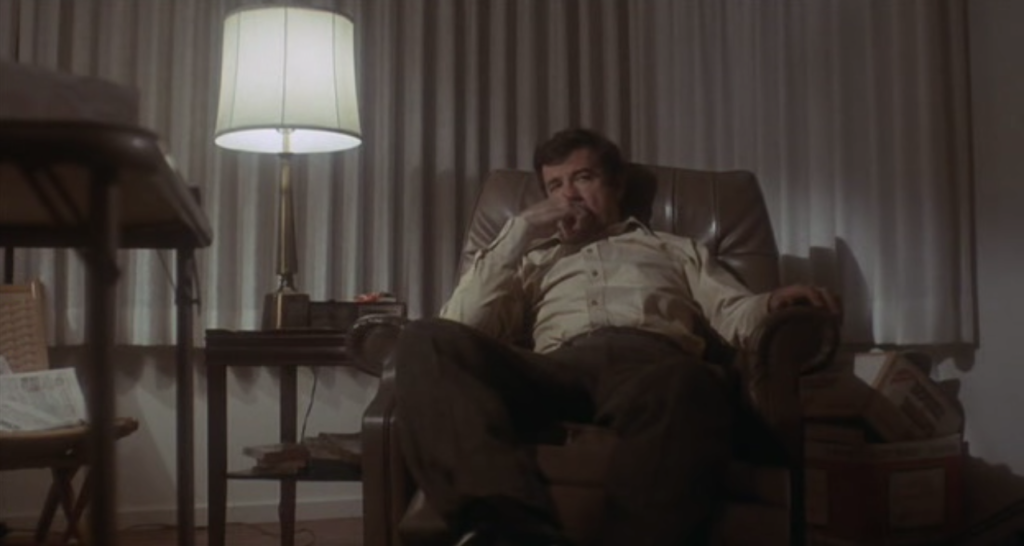 Played with a perpetual scowl by Walter Matthau, “laughing” Jake Martin is a gaping black hole at the center of a bewildering series of false leads, red herrings, and 180-degree turns – both in terms of its complicated plot and near-obligatory, San Francisco-set, post-Bullitt (1968), hill-roving climactic car chase – in the investigation following the above-referenced killer opening fire on eight passengers aboard a city bus. As one of the victims turns out to be Martin’s former partner, Dave Evans (Anthony Costello), the ensuing detective-work may become personal, but Matthau as Martin is bottled up – terse and unresponsive even when, in one scene, a suspect’s era-specific provocation of “Pig!” earns a mere half-hearted shrug – to the point where the character seems as faceless and featureless as the killer he’s pursuing. From the terrorist-like mass shooting that opens the film (a scene with even greater resonance when viewed today) through the queasily matter-of-fact emergency room operation that (temporarily) saves one of its elderly victims to the parade of street-level details involving pimps, prostitutes, and (mis-)informants, there seems little cause for laughter, sardonic or otherwise, as Matthau’s hang-dog expression and slouching frame glowers through yet another bit of obstruction and as yet another irrelevant detail (family life, bureaucracy; even, at one point, a tense hostage situation!) momentarily sidetracks his character’s single-minded course. 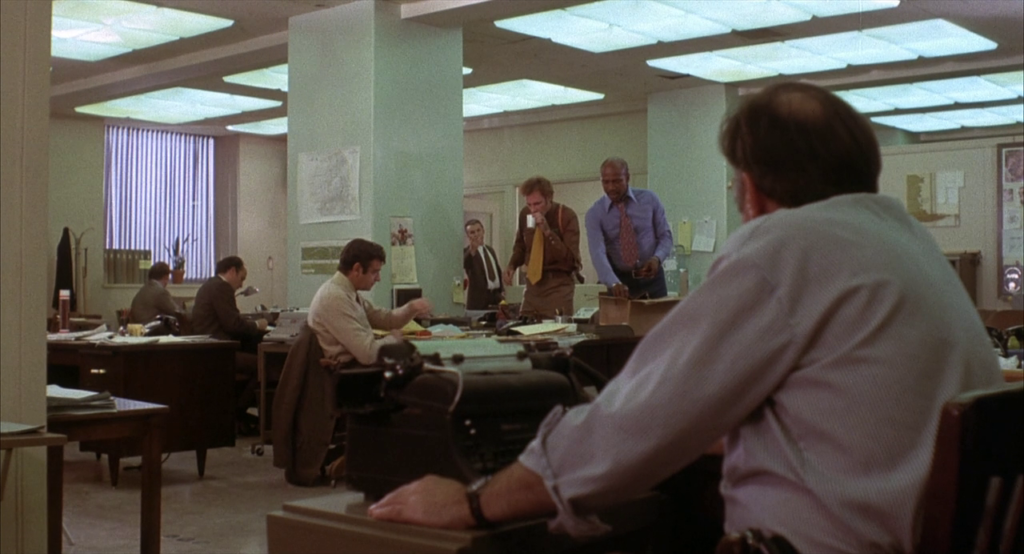 In addition to the hot-headed younger detective played by Dern, The Laughing Policeman most impressively features an astonishing who’s who of New Hollywood character actors – including testy Anthony Zerbe as Martin’s publicity-concerned superior, a commanding Lou Gossett as a streetwise cop investigating the peripheries of the case, a tensely fragile Cathy Lee Crosby as the murdered cop’s uncomprehending girlfriend; with familiar faces like Joanna Cassidy, Paul Koslo, Gregory Sierra, Clifton James, and many others providing “atmosphere” as interviewees, suspects, and standers-by (both innocent and otherwise). The Laughing Policeman goes for documentary-like realism in capturing the freaky-deaky, highly-transitional nature of its setting; visual “asides” of a make-up mirror lowering to reveal a transvestite’s mustache or Dern as Larsen smirking over an artist colony’s balcony at a 300 lb. nude female model (receiving Andy Warhol-esque “star” portraiture) amounting to a Greek Chorus of alternative cultural currents “threatening” to become the norm. Indeed, San Francisco circa 1973 is as much of a character as its colorful inhabitants as the investigation progresses: the hospitals, morgues, strip joints, restaurant kitchens, dank hallways, overlit offices, and all the other far past-prime locations the police procedural bleakly passes through screen-emphasizing a city coming apart at the seams in the grit-and-grime manner characteristic of the era and genre. 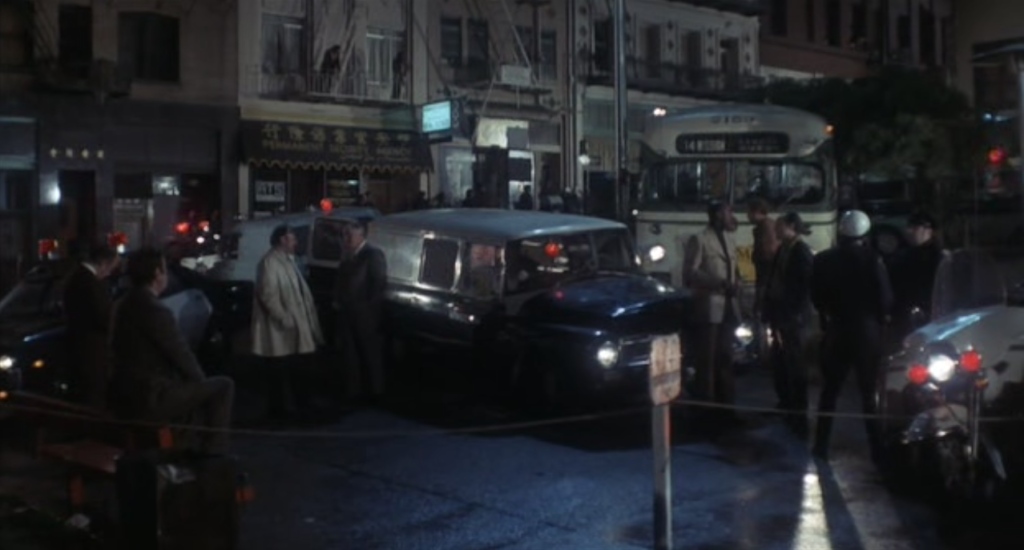 Presented by Kino Lorber in this new Blu-ray transfer, the stylistic hyper-realism of the 1970s crime thriller is emphasized in that sort of stale, unglamorized, hard-edged “look” which was the era’s closest visual equivalent to the shadowy black-and-white of 1940s and 50s film noir. As opposed to distancing an audience’s understanding through expressionistic artifice, though, films like Across 110th Street (1972), The Friends of Eddie Coyle (1973), and, one year later, Matthau again in The Taking of Pelham One Two Three (1974) – building on trend-setters like Dirty Harry and The French Connection (both 1971) – sought to shine a harsher, more direct-lit spotlight (both literally and figuratively) on urban decay and social change in the gritty guise of hard metal-crunching traffic mayhem and palm-gripped exploding hand cannons. A round-table discussion between Lee Pfeiffer, Eddy Friedfeld, and Paul Scrabo, along with a short interview with bit player Paul Koslo, round out the disc’s special features, all of whom make a case for The Laughing Policeman being unfairly overlooked among, again, the era and genre’s more recognized classics as an evocative and suspenseful thriller, while also expressing (individual) reservations about the film’s frankly oft-incomprehensible plotline and its lack of a well-defined main protagonist.

Personally, though, I dunno: enjoyable as a sort of 1970s updating of the labyrinthine plotting of a dizzying classic film noir like The Big Sleep (1945; remade again in 1978), I simply can’t fault a film in terms of its characterizations, either, that has the chutzpah to call such a relentlessly humorless character, a perfect reflection of his moribund milieu, The Laughing Policeman.