“Any guy who says he started playing guitar for any other reason than meeting girls is lying.” 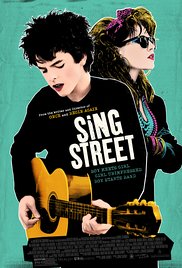 That’s not an exact quote, but it’s the gist of what some rock star once said. I was thinking it was either John Mellencamp, or maybe Tom Petty. But the internet is telling me otherwise.

Fact of the matter is, I don’t remember who originally spouted that pearl of wisdom I’ve been carrying for decades, but cut me some slack – I’m getting old. Old enough at least to remember the 1980’s rock n’ roll scene. Old enough to have been enamored with the novelty and electricity of early music videos. Old enough to identify with the ringing authenticity of Sing Street – an utterly charming coming age film about a teenage boy who forms a band because of a girl.

Somewhere safely between the real-world filth and fury of We Are the Best! and the 1980s fantasy of Rock of Ages, filmmaker John Carney’s Sing Street is note-perfect in its bittersweet adolescent longing, and the earnestness of the rock n’ roll it wraps itself up in. Unlike the former film, the band the boys form (called “Sing Street”, a play on their oppressive religious prep school, Synge Street) manages to produce more than one song. And being that these faux-retro songs were in actuality penned by the likes of talents such as Adam Levine, they’re catchier than maybe they should be. (At least next year’s Oscar category for Best Original Song needn’t be longing like it was this past year.) But unlike the misfiring excess of the “jukebox musical” Rock of Ages, Sing Street is able to embrace such dated 80’s hallmarks as big hair and guys in heavy make-up without reducing them to a punchline.

In short, Sing Street is all too happy to look back in nostalgia, laughing with rather than laughing at the era.

Perhaps though, the best comparison is a favorable one to Cameron Crowe’s Almost Famous: A filmmaker’s rose-colored coming of age memory that is innocent, chaste, heartfelt, yet totally rockin’. And like Almost Famous, it’s its director’s best work. 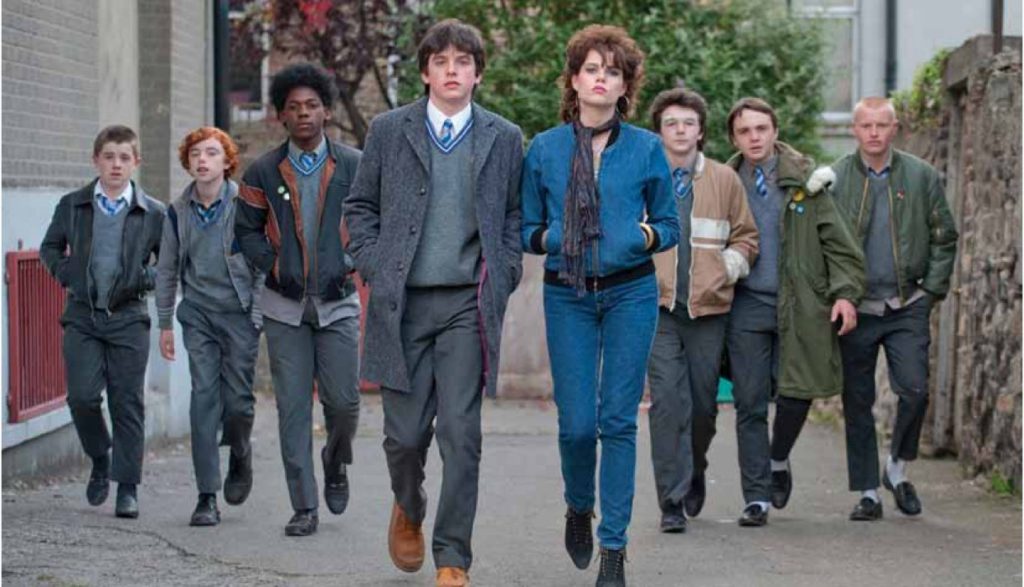 Never mind the hit parade of contrivances: The clumsiness of the band members as they accidentally knock over cymbals with their guitar necks, nor the overblown rowdiness of the boys in class presented as routine. There’s enough wrestling, smoking, and rough-housing behind the teacher’s back for Truffaut’s Antoine Doinel and Jean Vigo’s Zero for Conduct lot combined. None of that hurts the whole; it’s all all right. Sometimes the right notes are expected notes. If 80’s pop music taught us anything, it’s certainly that.

The film’s director/writer/producer John Carney (Once, Begin Again) goes back to his native Dublin, a perpetually grey and dismal environment that’s a 180 degree opposite of the bikini-clad sunbaked saturation of Duran Duran’s “Rio” music video. Yet, that’s precisely the material that inspires young Cosmo (played to perfection by newcomer Ferdia Walsh-Peelo, an amazing find) in the musical identity of Sing Street.

That is, until his stoner dropout older brother, affably played like a young Irish Seth Rogan by the versatile Jack Reynor, turns him onto The Cure. Then Spandau Ballet. Just as suddenly, hair styles and makeshift wardrobe selections change. More than that, the band’s music reflects these bands. One of the great triumphs of Sing Street is how well it understands and communicates the power and effect of pop culture influence. When Cosmo and his bandmates aim to emulate “Take On Me” by A-Ha, it’s anything but pathetic, sad, or silly. It’s what any of us would’ve aimed for back then.

For good measure, “Take On Me” sneaks in as a slowed down piano version later in the film, scoring a tender walk-and-talk scene. It’s easy enough to miss, but the choice is apt – in some ways it tells the story of the film. Still, the cue is so subtle, maybe it’s not even “Take On Me”, exactly. (The film’s soundtrack listing will neither confirm nor deny the song’s presence.)

It’s the influence that matters, and the deep imprint that even popular art that is considered “lesser” can have on us, permeating our day to day existence, giving spark to our hum-drum lives. 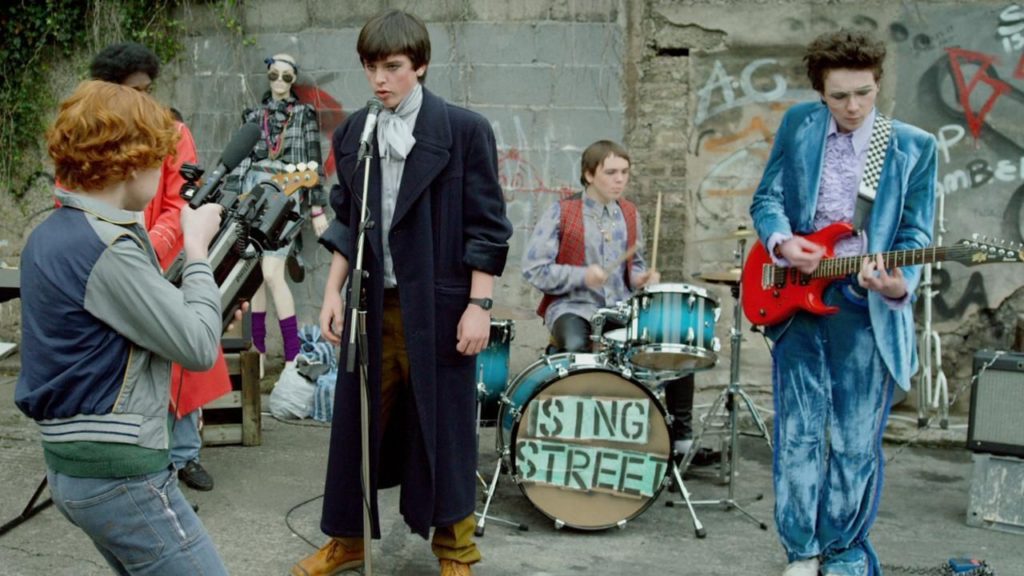 Making the all-important “Riddle of the Model” music video.

Then there’s the music videos. Oh man, the music videos… In a classic case of boy meets model/boy claims to be in a band/boy casts model as the star of the band’s video, Cosmo suddenly finds himself in urgent need of an actual band. But with a little help from his friends, Sing Street is formed, and the video shoot is green lighted. And lo and behold, the girl actually shows up! The resulting first video, for the Duran Duran-esque tune “The Riddle of the Model”, is a beautiful work of universal VHS nostalgia evoking a 1980s Dublin (curiously free of U2…) most of us have never otherwise known. In this brief video performance, Cosmo is the cool rock star he is in his head, even as everything around him is a clunky DIY blend of overly-channeled pretension and other kids playing dress-up. Before the shoot, Cosmo looks like a made-up phony in his eyeliner and make-up. But on camera, he’s surprisingly convincing. It’s two minutes of keyboard rock bliss, and it’s moment that Sing Streetcrosses over from merely something sweet to something truly special. 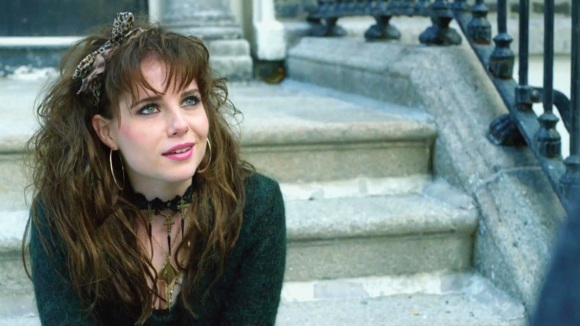 Looping back around like any good riff, we return to the base-line fact: Cosmo picked up a guitar because of a girl. Lucy Boynton plays Raphina, the afore-mentioned riddled model who first catches Cosmo’s eye. Raphina, in all her unattached enigmatic allure, has all the early markings of a standard-issue manic pixie dream girl. Yet there turns out to be a real person under all that teased hair and chameleon-like appearance shifts. In a fleetingly key moment, she sits alone at the mirror and wipes off her make up. Her unfulfilled longings may just run deeper than the main character’s. She is the glue that holds everything together. Not knowing that much about her, we nonetheless want her to walk through that door almost as badly as Cosmo does.

Sing Street may, on the whole, be no work of genius, but it doesn’t need to be. It is what it should be: a well-tuned confluence of teen angst, 1980’s pop nostalgia (infused with hits by Joe Jackson, The Cure, and Motorhead), and recognizably sweet flourishes. Cosmo’s journey from romantic longing to legitimate musician to true rock rebel is recognizable whether or not you are a child of the 80s, even if you haven’t ever been to Ireland. It’s pretty obviously Carney’s autobiography, or at least his wish fulfillment version. Glimpsing Cosmo’s video storyboards, he might just have a future as a filmmaker…

Breathing fresh life into an all-to-often laughable period aesthetic, its one of the best movies of the year so far. With Sing Street, he can drop the mic.