Tim Blake Nelson Addresses Every Man’s Journey To The Grave 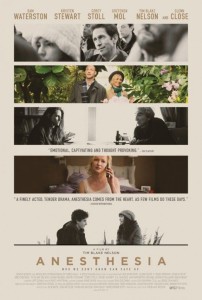 Tim Blake Nelson (O Brother Where Art Thou?, Holes, Lincoln) writes, directs, produces, and stars in an ensemble drama called Anesthesia. The film weaves several related storylines together into larger whole to reveal a bigger narrative that looks at the notion that we are all headed to the grave.  It is how death finds us that matters, whether that means we are kicking and screaming and doing something worth while that will echo long after we are gone, or whether or not we simply succumb to death’s knock after a lifetime of slowly fading away.

Sam Waterson plays Professor Walter Zarrow, a literature teacher at Columbia University who has taught for over 30 years, and yet still continues to bring his wife Marcia (Glenn Close) flowers every Friday for the past 40-plus years.  On his way home, with flowers in hand, Prof. Zarrow is brutally attacked just inside an apartment building he had run into to seek shelter from his attacker.  The film then flashes back to earlier in the week showing us several separate stories that will be weaved into the horrific event the film begins with.

Nelson plays Adam Zarrow, the professor’s son, whose wife Jill (Jessica Hecht-Dan in Real Life, Sideways) is facing a cancer scare, and whose kids Ella (Hannah Marks-The Amazing Spider-Man) and Hal (Ben Konigsberg-Orange is the New Black) are rebelling by smoking pot on the roof of their apartment, or trying to lose their virginity.

Other narratives include a story of Joe (K. Todd Freeman) who is a heroin and cocaine addict who is being taken for help against his will by his childhood friend Jeffrey (Michael K. Williams).  This seemingly side story will have huge implications to the opening scene, and may be the character arc that offers the biggest hope for redemption in a film that is populated with very little.

Sam (Corey Stoll-Ant-Man) is a man who is cheating on his alcoholic wife Sarah (Gretchen Mol) with a younger woman named Nicole (Mickey Sumner-Frances Ha), whose life is changed when he comes across Prof. Zarrow who lies in the entrance to the apartment building.

Finally Kristen Stewart (Twilight, The Clouds of Sils Maria, Camp X-Ray) plays Sophie, a troubled graduate student at Columbia who engages in burning herself with a curling iron to help her feel any sort of life as she wrestles with the burden of being someone committed to truth, even if it isolates her from the relationships she so desperately longs for. She reaches out to Prof. Zarrow, hoping that she might find help through someone she can at least respect for his knowledge of literature and how that helps him understand the burden she feels.

Like Crash, or even Disconnect, the weaving of several stories into one larger one is becoming more and more familiar to audiences, and therefore it is growing tougher to use this technique and maintain a cohesive and coherent storyline that is compelling at the same time.

Nelson does his best, but despite a solidly consistent feel in the dialogue across all of the narrative threads, there is too much down-time as he explores each of these characters briefly before cutting away to another story thread and then promptly returning again.  The cast and their performances are solid, however, and Nelson’s directing is sure, but there is simply too much to cover to keep the pacing tight and compelling.

If one theme seems to emerge, throughout the film, it is the idea of loneliness and the human condition being meant for connectivity.  Much of this was covered in Disconnect through our use of technology, but here, it is more the desire for connection but the resignation we have that it is all meaningless in light of the sure death that awaits us all.  Not necessarily a light subject, but Waterson, seeks to bring a hopeful cheeriness to the plight of each of these characters as he is ever the teacher, seeking to inspire those whom he comes in contact with.

While there is a great cast with very well known names, this film is a smaller, independent film and will be released only in select theaters on Friday, January 22nd.