Garrett Hedlund And Oscar Isaac’s Temptation In The Desert 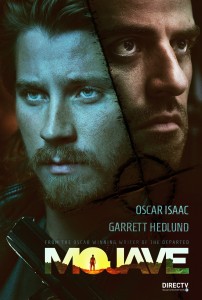 Mojave is an independent film that is written and directed by William Monahan.  In only his second directorial effort, Monahan is better known as the writer for such gritty crime dramas as The Departed, Body of Lies, Edge of Darkness, and The Gambler, along with Kingdom of Heaven.  Here, he assembles an impressive cast that includes Garrett Hedlund (Tron: Legacy, Unbroken, Inside Llewyn Davis, and Pan), Oscar Isaac (Star Wars: The Force Awakens, Inside Llewyn Davis, Ex Machina, A Most Violent Year), Walton Goggins (The Hateful Eight, Django Unchained, Lincoln), and Mark Wahlberg (The Departed, The Fighter, Daddy’s Home, Ted 2).

Headland plays Thomas, a suicidal artist whose family is back in England while he finds himself in Los Angeles in the midst of the movie industry going nowhere.  Slowly everything is slipping away, and he finds no comfort in the arms of the talent, Milly (Louise Bourgoin), who is in his latest film that he is producing.  Estranged from his wife and daughter, Thomas heads out to the desert equipped with water and vodka and no reason to live.

This all changes when a drifter by the name of Jack abruptly enters his camp armed with a rifle, speaking of Jesus’ temptation in the desert and his encounter with the devil.  Both men are educated, and able to read the situation and the very real threat each poses to the other as they engage in linguistic sparing.  And as much as it is clear that Jack is the dangerous individual in this scene, it is also obvious that both men mirror each other and balance each other’s extreme tendencies.  When Thomas gets a jump on Jack, takes his gun, runs, and accidentally kills a police officer who he believes is Jack catching up to him, Thomas finds out that there is very little degree of separation between the two men.

Walton Goggins and Mark Wahlberg have solid supporting roles to Hedlund, playing a shady attorney, and business partner to Thomas.  Goggins presence is felt despite having a character who is known for having few words.  His work in Tarantino’s films is a delight to watch, and its good to see him here.  Wahlberg plays up the Bostonian tough guy he has perfected in so many roles over the year, to play this former cocaine-dealer turned Hollywood producer.

Ultimately, the strength of the narrative comes down to Oscar Isaac, who owns this character.

When you look at the variety of roles that Isaac has played in the last 15 months or so, it is quite impressive how much of a chameleon he is becoming, and his ability to convince you of that, despite having characters that come from many different backgrounds, including ethnic, and socioeconomic, as well as his ability to vacillate from smaller films to large blockbusters.

Monaghan’s script for Mojave is not as tight or compelling as his more notable screenplays, but for a small film, it provides plenty of opportunities to explore these two main characters and what the character of Jack calls “the duplicity of man”.  Both men have lots of light and dark, and all sorts of shades in between that are reflected in their actions, and feeling of being failed artists and flawed people.  The question isn’t so much who is good, and who is bad?  It is the notion that as people, we are both given the right circumstances. When seen through the prism of the biblical story of Christ’s temptation in the desert his encounter with the devil, this point is brought out even more.

Mojave is an interesting case study, but will be a film that does not get much traction outside the niche market it will appeal to.