Film Review: HE NAMED ME MALALA

A Glowing But Superficial Picture of an Iconic Life 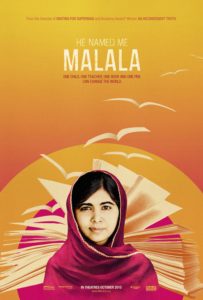 We don’t have many heroes these days. They’ve either died, been deconstructed, or both; leaving us with a posture of suspicion toward almost everyone. Almost. As unlikely as it might seem, right now, one of the most widely admired figures in the world is an 18 year old girl preparing for college.

There’s a certain inevitability to the documentary He Named Me Malala. Malala Yousafzai was a political activist in her own country at 11, a global figure by 15, the subject of a best selling biography at 16, the winner of the Nobel Peace Prize at 17 – and now comes a film about her life from Oscar winning documentarian Davis Guggenheim (An Inconvenient Truth, Waiting for Superman). As with his earlier documentaries, Guggenheim is doing advocacy work with this movie. It is a glowing picture of Malala and a call to action on behalf of girls’ education. In fact, there is a literal call to action at the end of the film, directing viewers on how to #standwithmalala. There is no deconstruction here, no exposé. At the end of He Named Me Malala, its subject remains a hero. 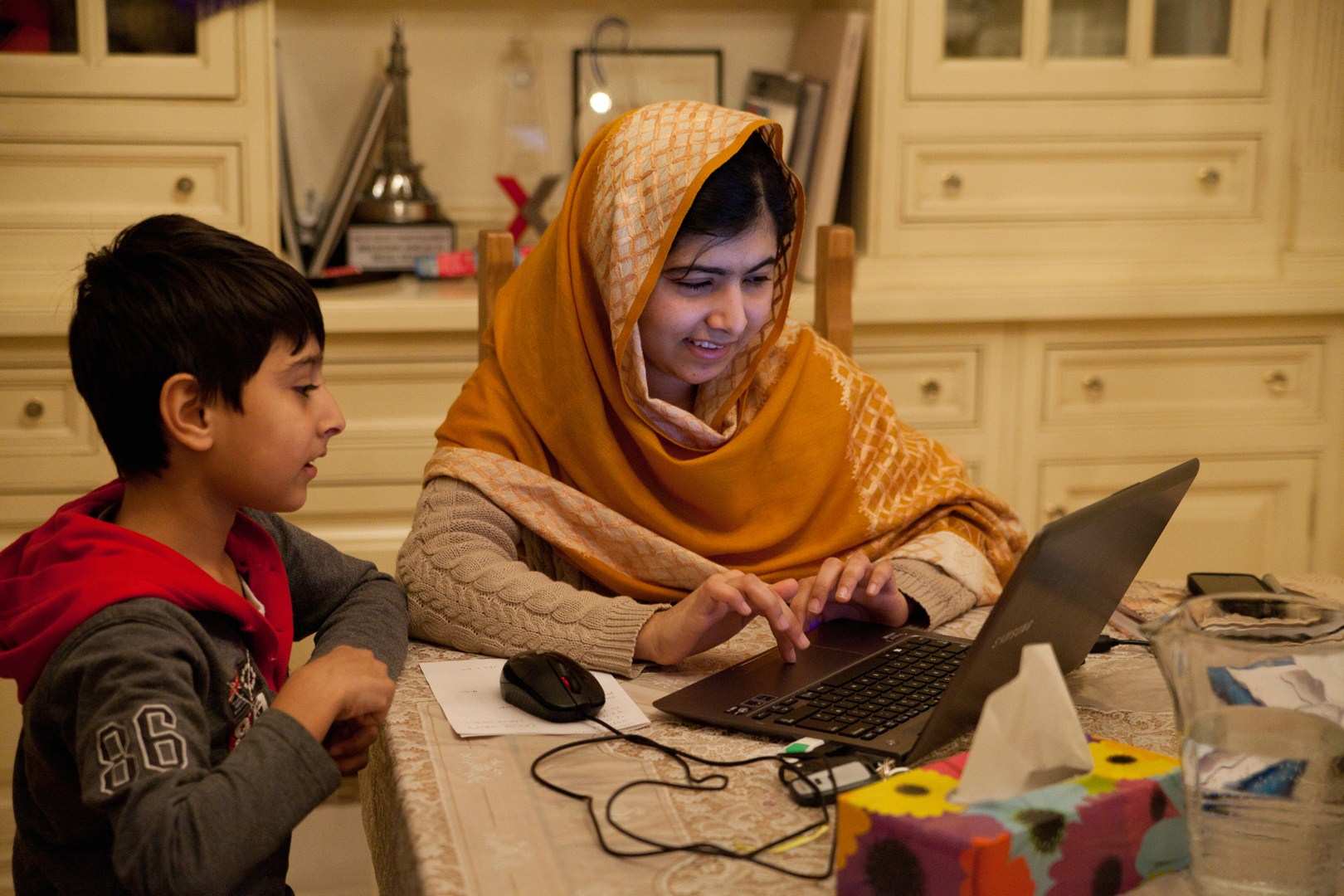 And yet, if that was all there was to the film it would be unnecessary for many viewers. “She has a great story,” a friend said when I mentioned seeing the movie. “But we all know the story.” Fortunately, there’s more than one way to view He Named Me Malala – or at least, there are shades of more than simply advocacy or hagiography. Firstly, it should be noted, we don’t all know the story, and certainly not in the detail that this film provides. Interviews, photos, and gentle animation are combined to tell the story of Malala’s childhood in Pakistan’s Swat Valley; of the rise of the Taliban and their restrictions on girls’ education; and of Malala’s increasingly public activism. Her public stance against the Taliban would lead to an assassination attempt when Malala was 15; and her recovery (after being moved to Birmingham, England for medical treatment) and continued activism would captivate the world.

He Called Me Malala is an effective retelling of what is still a brief but extraordinary life. It depicts the brutality of war and religious extremism without being excessively grim (making it suitable viewing for older children).  As Malala says at one point in the film, girls have been deprived of education in almost every country, regardless of the particular religion. It’s a global issue and remains worthy of our attention. We should stand with Malala in this struggle.

There’s more to see here, though, some of it charming, some of it intriguing and even concerning. 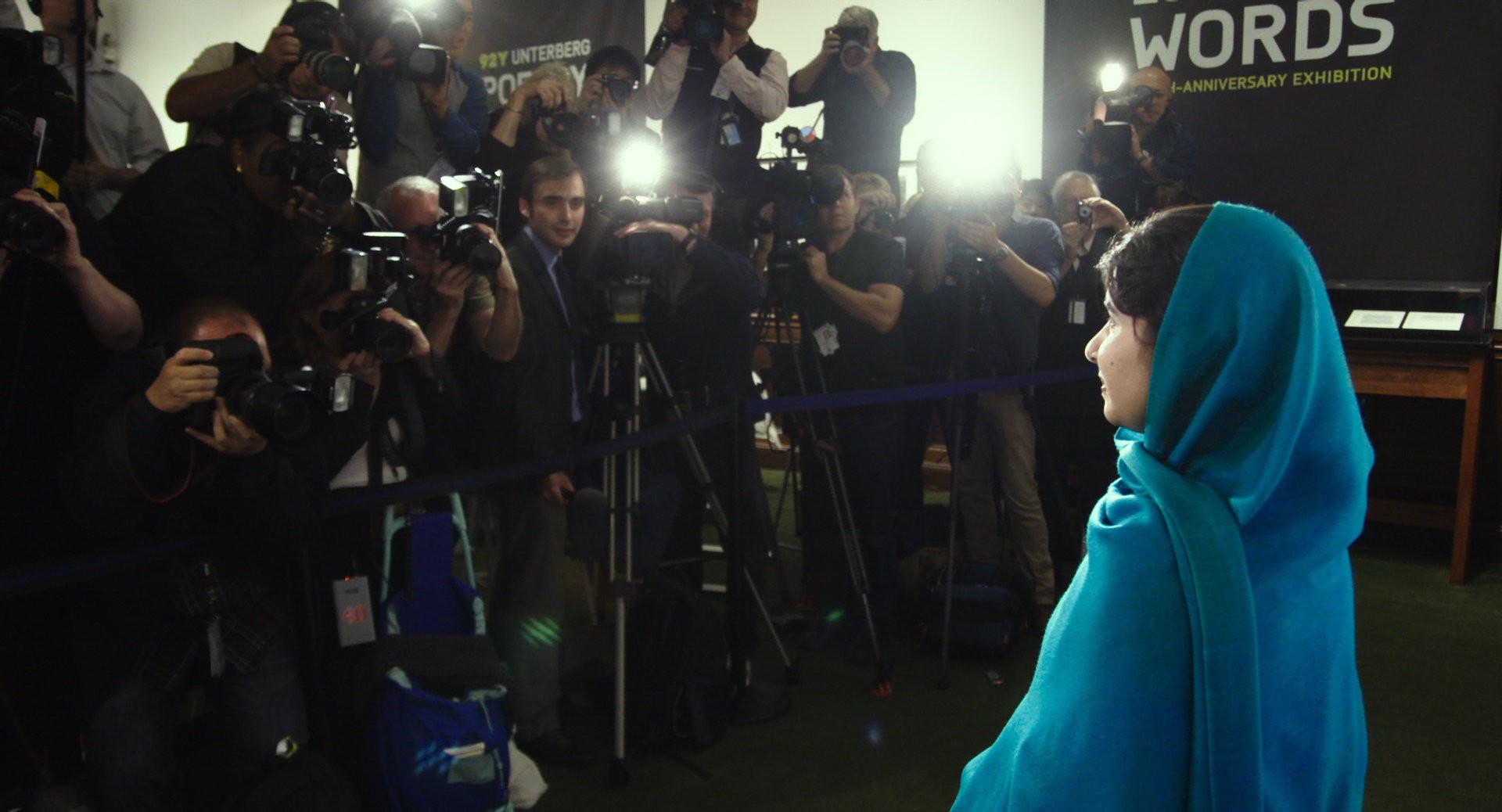 Guggenheim wants us to know that this iconic figure is in many ways an ordinary girl. Early in the movie he give us her youngest brother’s accusation that Malala is “a little bit naughty” and “violent” at home, followed by her laughing defense of why she sometimes slaps him. She laughs often in the scenes at home, shyly hiding her face behind her hand as she does so. Malala follows cricket, plays cards with her family, crushes on Brad Pitt and Roger Federer, and struggles in the English school she attends in Birmingham. She comes across as genuinely funny, self-deprecating and likeable. Her relationship to her parents, however, is complicated. Malala’s father, Ziauddin Yousafzai, is depicted as the most important figure in her life. A poet, activist, educator and progressive Muslim, the elder Yousafzai seems to have had a vision for his daughter from the moment he named her after an Afghan folk hero (a teenage girl who carried ammunition to flagging soldiers in an 1880 battle against the British, and who died on the battle field that day). Father and daughter are deeply attached, “two souls in one body” he says of their relationship. Ziauddin is at Malala’s side as she travels, always close by when she speaks publicly. They are affectionate and praise each other throughout the documentary.  Ziauddin is really the co-star of this film.  In contrast, the first time that we see Malala’s mother, Torpekkai Yousafzai, she passes silently in the background of a boisterous family scene. This is emblematic of the role she plays throughout. Malala’s mother is admittedly more conservative and traditional than the rest of the family. She doesn’t speak English well, is only now learning to read and write, and is unhappy living in England. There are moments in the documentary when Ziauddin and Malala speak of Torpekkai in ways that made me sympathize with her position in this famous family. Ziauddin says he married her for her beauty, and she married him for his learning. Malala says that her mother is not “free” because she is uneducated. In a progressive family where education is the most precious commodity and the highest accomplishment, where does that leave this woman? She seems lost not only in Birmingham, but within her daughter’s orbit. 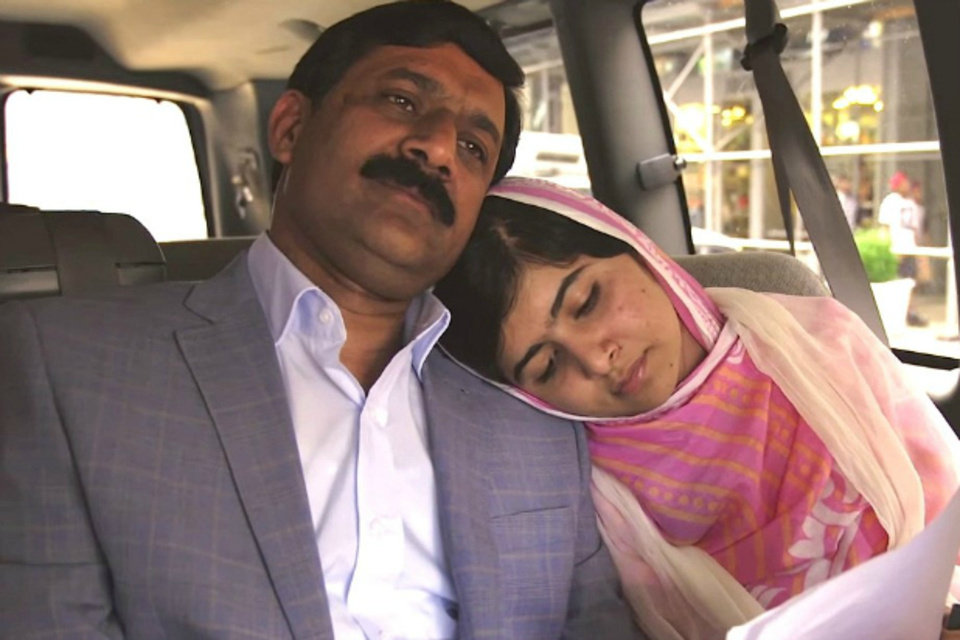 There have been accusations over the years that Ziauddin groomed Malala for her role as a political activist and wrote her speeches for her. Although both father and daughter deny this, Ziauddin still wrestles with guilt over whether he pushed Malala into the path of danger in Pakistan. What can’t be contested is Malala’s natural charisma and forcefulness as a speaker. One of the gifts of this documentary is the chance to see clips of Malala’s public speeches before the shooting. She is ferocious: naming the names of Taliban leaders and shaming the government for not stopping them. The Western image of Malala is often of her gentleness and forgiveness toward her attackers – but these clips show a diminutive lioness. Watching them I understood why the Taliban made her a target.

About that forgiveness, though…there is a scene in which Guggenheim asks Malala if she was ever angry at the gunman who shot her in the head and nearly killed her. “Not a bit,” she says. “Not an atom, not a proton…maybe a quark”. Here and elsewhere in the movie I wondered if Malala was speaking her truth or saying what she believes the world needs to hear from her. In another scene she says that “it doesn’t matter” that she can’t smile normally, or close her left eyelid completely, or hear out of her left ear. She says this resolutely, and yet, how can it not matter?

How can a teenage girl have never been angry or grieved over permanent disfigurement and hearing loss? Is she superhuman? Or is something else at work?

The documentary barely skims the surface of Malala’s Muslim faith (she explicitly rejects the “tiny, conservative God” of the Taliban) and does not allow her to explain her commitment to non-violence as a political philosophy at all.  That’s unfortunate, as she’s been quite open about these convictions elsewhere.  Leaving them unexplored makes Malala appear more saintly, but ultimately undermines the kind of activism Guggenheim is trying to promote.  If Malala is simply too good to be true, there’s nothing for the viewer to do but marvel, then walk away uplifted but unchallenged. 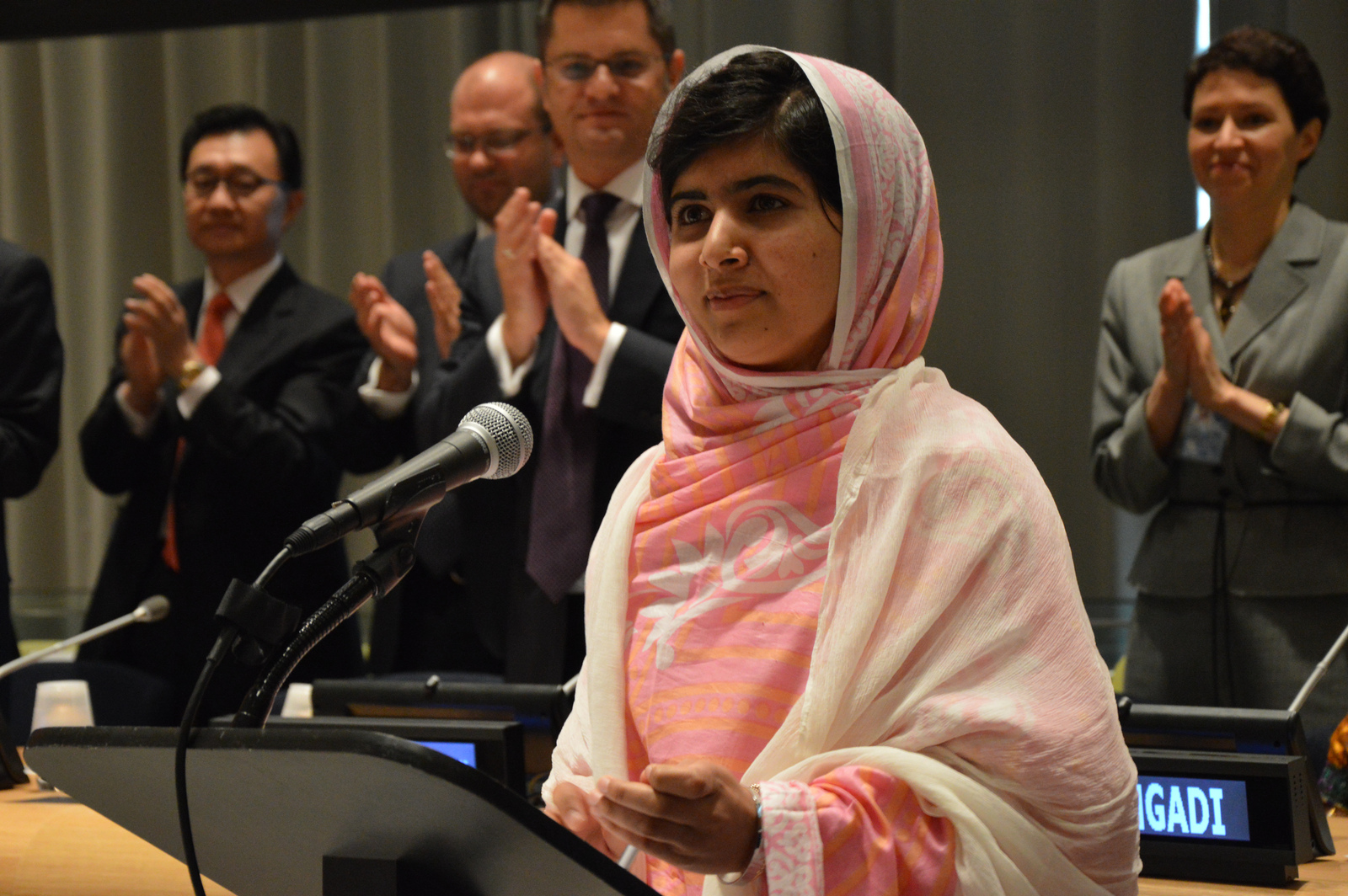 In a speech given to the United Nations on her 16th birthday, Malala said that her “weakness, fear and hopelessness died” on the day of her attempted assassination. Our heroes often die as martyrs: in some sense, Malala lives as one. She didn’t lose her life to the Taliban, but her localized battle for her country and her own rights became something much bigger – bigger than one country, bigger than one girl. She was shot as a Pakistani activist:  she woke from her coma as a global figure.  I see hints in the documentary that Malala now consciously lives into a role that has been partly imposed upon her by a hero-starved world. She meets with heads of state, speaks to the United Nations, and enters some of the most devastated places on earth for the sake of others, and Malala does it with a stoicism that is almost unsettling. We see her father tear up several times in the course of the documentary, but never Malala: not when discussing her own suffering, not when watching the flow of refugees crossing from Syria into Jordan, not even when listening to the weeping parents of girls kidnapped by Boko Haram in Nigeria. Of the last scenario, Malala laments to Guggenheim that she is only a teenager herself. What can she do? The self-doubt is reserved for the documentarian, though. She goes on to speak to Nigerian President Goodluck Jonathan with the forcefulness of that young lioness back in the Swat Valley.

Guggenheim doesn’t explore why Malala does what she does, or whether she ever grows weary and wishes to be an ordinary teenager. I found myself torn between a desire to see this young girl freed to live a normal life, and the realization that the world has always needed individuals who lay down their normal lives to bring about change. At least for now, Malala Yousafzai appears to be one of those rare people.