The Satanic Rites Of Whitey Bulger? 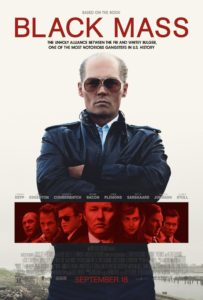 Warner Brothers is a studio long known for its “ripped from the headlines” crime dramas. When the next studio-honoring montage is made, Black Mass can safely be left out.

Such an exclusion is not due to the film’s lack of credentials in the crime drama category. It most certainly is that. It also bears that aluring “ripped from the headlines” element, presenting itself as the troubling true-life tale of notorious Boston gangster kingpin James ‘Whitey’ Bulger, played with occasional simmering aplomb by Johnny Depp. Bulger famously finagled his way to gangland royalty in the 1970s and 80s upon signing up as an FBI informant, and then proceding to give them nothing.

Those looking for a history lesson, however, may be let down. Bulger’s day to day crimes, per the film’s narrative, are murky at best. Likewise, so is his FBI scheme. Never are we given a reason to truly despise Bulger, nor any reasons to perhaps find a lurid fascination with the man. This coupled with the lack of origin reveal – there is nothing that explains why he is the way he is, why he turned to a life of crime, nothing to grab ahold of – leaves one to wonder why one is watching this film in the first place.

The promise of a Johnny Depp return to form is a likely reason many will be compelled to check out Black Mass. Depp’s downward spiral, a years-long barrage of dull yet irritating and hammy roles culminating with this year’s Mortdecai, but also including Transcendence, The Lone Ranger, Dark Shadows, The Rum Diary, Alice in Wonderland, and all those Jack Sparrow sequels, has eradicated much of his fanbase and put a doomsday clock countdown on his superstar status.

The “Daredevil” lighting does BLACK MASS no favors.

His prestigous turn as Bulger plays as a much-needed return to respectablity – until one actually sits through this film, it being so oddly devoid of tension. It’s dreary stretches allow plenty of time to realize that this is not so unlike most every other role that’s landed Depp in his current Hollywood hock. His presense can’t help but stand out as showy, overly made up, and by far the most “intentional” thing on screen in an otherwise “gritty realism” movie. It is yet another venure into engineered excentricity, but via an Awards Season filter. This is one project that is attempting to effectively utilize this overbearing facet of Depp’s work, albiet compensating by snuffing him secretly into a supporitng role. (That’s right, ‘Whitey’ Bulger isn’t the true main character here. More on that in a moment…)

Depp is actually not to blame for the dull slog that is Black Mass. The unexplained title, evoking Satanic rites, is no doubt intended to reflect the state of Bulger’s soul, but instead evokes a sea of tar that the screenplay places everything into. Tthe actor is saddled with some of the most unintentionally alien-looking make-up on this side of Leonardo DiCaprio in J. Edgar. Depp at times appears to be doing exactly what he is doing, operating from inside a thick lot of latex, powder, and contact lenses. That said, he somehow yet manages to do what he was brought on to do – imbue Bulger with a sense of danger. 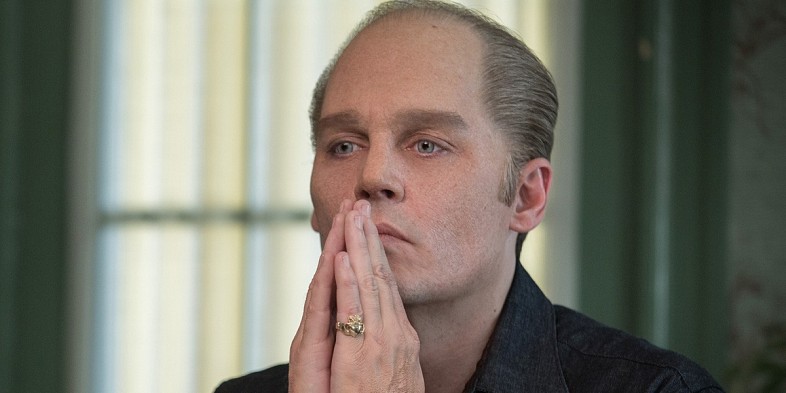 Director Scott Cooper, who debuted with the terrific Crazy Heart, but took a self-serious stumble into ultra-violent revenge drama with Out of the Furnace, has spoken of how he desired to push Johnny Depp into such unexplored territory. And certainly, amid the very distraction of the character as realized, there are those moments. A bright spot among the self-proclaimed black mass of Black Mass.

Bulger in the movie has no character arc. He starts off evil and ends up evil. He does a lot of evil things, mainly offing a string of his own criminal cohorts, a fat lot of pathetic slobs who might as well all be wearing t-shirts that say “Dead Meat”. Beyond that, the most repulsive moments of Bulger onscreen are when he pays a threatening visit to another man’s wife, and when he gives his young son the morally reversed life lesson that if no sees you doing something, then it didn’t happen. We’re told at various points that he’s responsible for getting school children hooked on drugs, though for all we know that may or may not be FBI hearsay.

Depp’s successful moments in the role could be extracted and fully appreciated outside of the context of the rest of the film, and that’s a problem. Aside from these few actor-reel moments, Depp’s performance primarily consists of him getting in and out of cars and walking away menacingly, face to the ground, while his goons murder someone who came with them. Cooper, meanwhile, is plenty content to focus on jarring his audience with bursts of swift brutal violence that are peppered throughout. 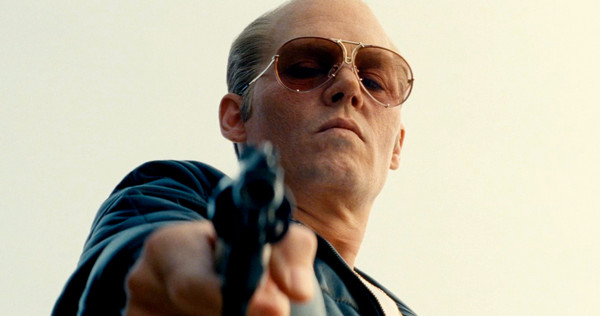 The character with the story arc (the true main character) is Joel Edgerton’s FBI agent John Connelly, a sorry sap who allows himself to get taken into the mess (mass?) of it all. Edgerton, a brilliant chameloen of an actor, virtually unrecognizable from one role to the next, is the real star of this film. The trouble is, the film doesn’t realize that. Much like the plight of the character he plays, Edgerton himself is boxed in by circumstances beyond his control – namely a screenplay devoid of essential threat, stakes, and empathy, and a director who is preoccupied in cultivating an atmosphere of lingering east coast period dread. It doesn’t help that like Depp, Edgerton also appears caked in makeup, eyeliner, and a wig.

Also playing in this serious game of “dress-up & guns” are Benedict Cumberbatch as Whitey’s apparently straight-arrow brother, Kevin Bacon as an FBI blowhard, Dakota Johnson who’s solid in her two scenes as Bulger’s wife, Peter Sarsgaard as an unhinged criminal, i.e., the Peter Sarsgaard role, Adam Scott in a rare dramatic supporting turn as another FBI stooge, Corey Stoll as a scene-stealing lawman, and Juno Temple as a dim-bulb hooker, i.e. the Juno Temple role. All in all, it may be the single most spectacular cast to be collectively squandered since Red Dragon (which, coincidentally, was directed by Brett Ratner, a producer on this movie). That said, Depp and Edgerton come out ahead, while one can only hope that Cooper finds his way back to Crazy Heart territory sooner than later, and leaves all this soulless killing and squalor behind.

Black Mass is ultimately a true-life corruption tale that fails to explain itself, despite its own self-imposed structure of being a feature-length flashback. The production refuses to channel the power at its disposal, and subsequently leaves viewers with precious nothing to chew on after the fact. Devoid of both empathy and clear criminal mechaniations, the few isolated strong points of Black Mass cannot pull it from the narrative tar pit it is caught in.