THE DUKE OF BURGUNDY – Film Review

An Art House Relationship Story… and Some Weird Fetishes 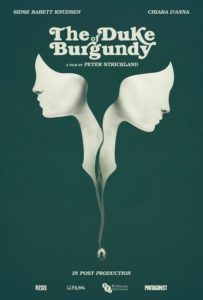 The Duke of Burgundy is the latest film from director Peter Strickland who directed the 2012 film Berberian Sound Studio.  As in that film, sound becomes a unique character in the film, weaving a tapestry through the lives of two women who are members of high society, and also lovers with specific tastes for keeping their romantic flame alive.

The opening of the film depicts Evelyn (Chiara D’Anna-Berberian Sound Studio) as a servant/maid for Cynthia (Sidse Babett Knudsen-After the Wedding), a rich, single woman who is an expert on moths and butterflies.  The film doesn’t let on what time period it is, as the house is a modern victorian and Evelyn rides her bike or walks through the meadow to arrive at Cynthia’s house, and we see no modern transportation.  We are presented the heightened sense of sound of a brook babbling in the woods, of creaking doors in the house, or the sound of Evelyn scrubbing the floor.

Cynthia appears to be a hard woman, humiliating Evelyn with verbal abuse, culminating with her dragging Evelyn into the bathroom.  From the vantage point of the hallway, we only hear what is happening beyond the closed door as Evelyn is ordered to lay down and open her mouth.  Next, you hear the sound of someone urinating.  Evelyn is a human toilet.

The camera pulls back and we find that both women are at a lecture on butterflies and moths.  We learn that each make their own unique call/cry, and again sound is prominent here.  This is really a tale of two lovers who like to roll play.  And like a moth to a flame, these two have their own unique call as they seek to keep their romance alive.

Cynthia seems to be the dominate one given her roll as master of the house to Evelyn’s servant/maid.  But as the curtain is lifted, we find that Evelyn is really the one pulling the strings, craving the abusive words and actions as a means to feel aroused and alive.  Cynthia is the subservient one, willfully playing the role she is being assigned so as to please her lover, even going so far as to lock Evelyn up each night in a box where she is bound.  As this new device begins to be used, the film takes on a more hallucinogenic tone, blurring the lines of what is real or perceived.

Despite the fact that this film is wrapped up under the veneer of a lesbian fetish film, based on the director’s desire to pattern it’s feel after 1970’s European erotica, it really is not about “that”.  There is hardly any sexual scenes, as most of this happens away from the camera eye.  Instead, this film is more about the basic impulses of two people struggling to continue a relationship that has cooled down, reaching for more extreme measures to keep the flame alive while it really is going out.

It is here the the moth is an appropriate metaphor throughout the film as each tries to get closer to the proverbial flame.  To feel the heat and passion of it as they fly through life.  But as they strain towards that flame, and draw closer, they are actually closer to their death, relationship-wise.

Ultimately, this film, however, will have a very limited art-house audience as its subject matter and visual and sound technique will be off-putting to the masses. It is also hampered by being extremely slow and repetitious in its presentation of these two women’s journey.  Strickland does show a strong command of nuance as he directs this journey through the screenplay he also wrote. But for most, it will be a journey these two women will have to take on their own, as this film will not play to the masses.

This film is playing at the Alamo Drafthouse and other select theaters.