A Mind Bending Chicken and Egg Story With Time Travel 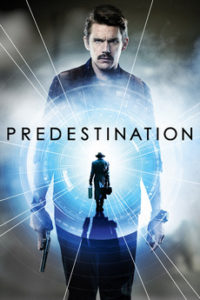 The latest sci-fi films that have been released at the box office lately, or that are anticipated for release later this year, have been of the blockbuster sort. From Gravity to Interstellar, from Guardians of the Galaxy to the upcoming Star Wars: The Force Awakens, Hollywood’s mantra seems to be, “go big or go home”.

This is not a bad thing, either. Gravity was nominated for many awards, while Interstellar was a beautiful story with a universe-sized canvas to explore as only Christopher Nolan can. Guardians of the Galaxy created a whole other side to the Marvel universe and was a lot of fun to boot. The hype on the latest Star Wars is off the charts at the moment, even though it is 38 years after the original installment. But the big question is: are there any small science fiction films anymore? Is it all outer space and creatures and explosions?

The latest offering from Michael and Peter Spierig (Daybreakers) balances the typical tropes of time-travel, and looks at how the past effects the future but humanizes a surprisingly story-driven entry in the genre.  While Predestination is shot on a smaller budget, it is consistently interesting throughout; creating a story that will have you reassessing every detail of the plot long after the credits have finished scrolling.

Ethan Hawke (Boyhood, Before Midnight, The Purge) plays a temporal agent who time travels to try and stop a vicious terrorist.  As he travels to the past, great care must be taken to protect the future and specifically, the agency he works for.  Having had a close call with his terrorist prey, he is given his final assignment and one last opportunity to stop this vicious criminal.

We find Ethan Hawke’s character, the Barkeep, tending bar in the 1970’s speaking to an on-edge man (played by Sarah Snook) who writes articles under the pseudonym “The unmarried mother”.  This individual is sympathetic to the bomber terrorizing the city, and makes a bet with the Barkeep that his story will be the craziest story the Barkeep has ever heard.  A story that will dwarf the chilling tension that hangs over the city.  The Barkeep takes him up on his bet and for much of the film we are given a glimpse of a number of events from the past that will have a bearing on everything the Barkeep is trying to do as he attempts to complete his final assignment.

Based on a 1958 short story called “All You Zombies” from Robert Heinlein (Starship Troopers, Stranger in a Strange Land), this film is what Alamo Drafthouse Houston’s Program Director Robert Saucedo describes when he says, “It harkens back to the days where science-fiction was loud, exciting and featured plenty of exclamation points. It’s pulpy in the way good science fiction used to be – full of big ideas, slick production style and just slightly heightened reality.”

The pulpy description is an apt one as it mostly plays it straight but with enough twists and turns to keep you guessing, and mentally processing the question posed in the film of which came first, the chicken or the egg?  This question is pivotal to the way you will watch the film as it effectively creates a tension with the time travel elements of the story that will demand you to work out the logic in addition to the facts as the Barkeep tries to figure out the identity of the bomber.  Where the story goes from there will surprise you.

So while so many films are using the sci-fi genre in big ways, Predestination is bold enough to go small, with enough interesting tension to propel it forward and ahead of many of the films that will debut this month. This film will be playing in select theaters, but will probably not reach a wide audience.

Ethan Hawke is solid in this role and again shows that while he can handle the bigger roles like Training Day, he tends to shine in the smaller, more character driven films that have defined his career from Jesse in Before Sunrise/Sunset/Midnight, to his turn in 2014’s brilliant film Boyhood. Noah Taylor (Vanilla Sky, Almost Famous) also appears in the film and serves as a mysterious presence in the story being told by “the unmarried mother”. To say more will bring us too close to spoiler territory, and so I won’t venture any further.

Overall, Predestination is a fun and interesting take on the genre and provides enough twists and turns to be satisfying. While it won’t find a large audience, it should find a niche following in certain markets. If you are looking for something different that is a throw-back to class science-fiction short stories, then Predestination is a small film with a unique story.