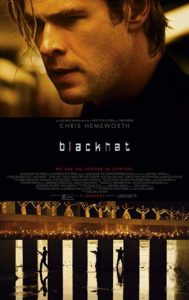 JIM TUDOR:  Opening with an extended shot of information traveling the web, Blackhat greets us as the end 2001: A Space Odyssey meets the beginning of Fight Club by way of Tron.  With filmmakers having been queuing up for over twenty years to deliver their own takes on the brave new world of the information superhighway and computers and the internet and all of that, this kind of visualization, as accomplished as it might be this time, feels almost unintentionally passe.

Such is the start of the cyber-crime themed return of sometimes-visual genius director Michael Mann.  After what can only be called an astonishing (if not always satisfying) run of films from the early 1980s onward, Mann’s luck ran out prior to his doomed HBO horse racing series Luck with his 2009 overreach, Public Enemies.  Enemies, a massive period project starring Johnny Depp and Christian Bale, was the result of Hollywood’s panic over the DGA writer’s strike at the time.  The film was ready to be made on the cusp of the strike, and rather than be caught with no new films whatsoever, Hollywood gave the production greenlight to seemingly whatever it could.  At least, that’s the legend that got printed.  Unable to go through proper rewrite channels, many films of that time period suffered from a certain incoherence.  (Transformers 2, anyone?  Anyone?)  Mann nonetheless charged forward, shutting down large sections of Chicago for his shoot, and going whole hog with his high-falutin’ HD video historic crime yarn.  It cost a fortune, and it failed in every way possible.

Cut to now, January 2015.  Blackhat is Mann’s first new theatrical feature in almost six years.  Thankfully, it places the still-esteemed director of Heat, Thief, Manhunter, and Collateral back in his cinematic comfort zone of contemporary crime stories with edge.  Unfortunately, save a few bravura sequences and an alluring sheen of high-tech colliding with third world decay, Blackhat lacks any of the previously listed films’ gripping qualities.  Although it’s a movie about cyber crime – a current topic if there ever was one in light of the Sony Pictures/The Interview kerfuffle – its dependence on public shootouts and physical violence saddles it with a load of ill-fitting retro, and reveals that the filmmaker, for all his research and meticulousness, doesn’t know how to bring his visually kinetic strengths to a world where the real crime is committed on a computer.

ERIK YATES: This also reminded me of last year’s Transcendence, where a film that is supposed to be cutting edge and in the “now” looks terribly backdated.  This film, Blackhat, felt like Michael Mann stepped back into a made-for-television series that wasn’t even as cool or stylistic as his groundbreaking series, Miami Vice. Miami Vice as a dated product of the 1980’s still holds up better now that this does, despite 30 years of wear and tear.

He certainly tried to check off all of the boxes of a typical Michael Mann crime thriller by having a young actor with several high-profile films under his belt taking the lead role.  In this case it was Chris Hemsworth (Thor, The Avengers, Rush) who apparently is a high-level computer hacker who is also built like, well, Thor, and (without any real backstory to develop this) who has the ability to kill at will.

He also meets the obligatory “shirtless” scene that Hemsworth must have in his contract.  Mann also checks the box of having a foreign beauty working alongside the protagonist. Here, the setting is China, and the actress is Wei Tang (Lust, Caution, and Dragon) playing a romantic role much like that of Gong Li in the film version of Miami Vice. Their relationship is very awkward though, and like a made-for-television film, they are staring at each other one moment, and then the next its like a switch is flipped and they are kissing with a sudden cut of them in bed the next morning.  Nothing is done in the storyline to build any plausibility to this relationship other than the idea that you must have some romantic interest in a story such as this.  Everything was very forced here, and I got the feeling that Mann was just throwing things up against the proverbial wall hoping something would stick.

There are still great shots of airplanes set against a sunset, or boats cutting through the water while the cast stares straight ahead, and a strong build towards the inevitable conclusion that Mann’s grittier crime stories are known for.  Yet, for all of the boxes being checked, this is Michael Mann at his worst, as it all feels very hollow, and stretched thin.  Even the sound mix at my screening fell victim to this film, with booming effects suddenly becoming several times louder at certain moments before retreating to an appropriate mix, and dialogue going from audible to muffled tones the next.  In short, this film was all over the place visually, audibly, and narratively. 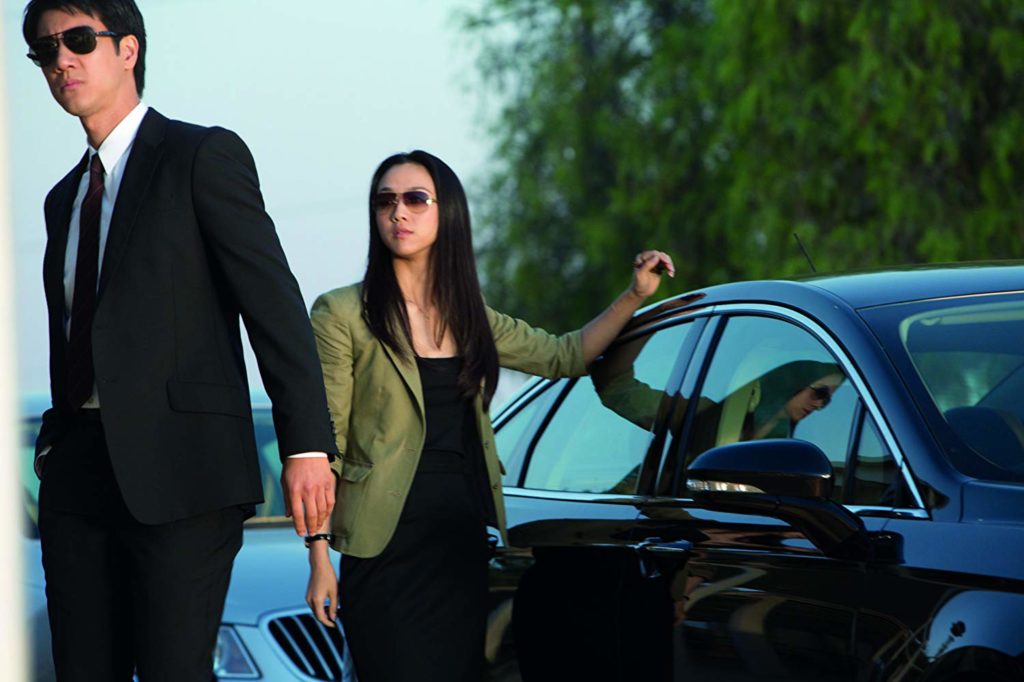 JIM TUDOR:  Hemsworth is fine, except for the fact that accepting him as one of the world’s foremost computer hackers is about as conceivable as Denise Richards as a nuclear scientist in The World is Not Enough.  Viola Davis, as a quipping law officer, works hard to bring a spark to this otherwise trudging actioner.  A better version of this film would’ve starred her character instead.

There’s plenty of relevance to be had in the topic that Michael Mann has taken on here, but one would never know it from this film.  The closest he comes to hitting on an effective idea is something about the confluence of the third world and Asian culture with Western technological dominance.  For the sake of explanation, I’ll say a few quick things about the problematic ending of Blackhat in the paragraph below.  (That was your spoiler warning.  Skip to the final paragraph if you must…)

By the end of the movie, when the heroes and villains must square off in rundown Jakarta, Mann takes the opportunity to stage his violent showdown at night, amid some sort of color old world musical ritual that happens to be going on at a mausoleum.  A half dozen native dancing girls do a choreographed number on the concrete slab roof of the structure while an array of several hundred brightly garbed individuals carry pole torches in formation out front.  It’s all very exotic, and completely, inexplicably foreign.  The problem is that all of these people are reduced to less-than-human scenery.  When one character commits a gory action against another, the torch carriers just pass right on by without batting an eye.  A moment later, someone has a gun drawn and aggressively aimed forward.  Nevertheless, the girls keep on dancing, and the torches keep on marching to the native beat.  It isn’t until the villain begins firing a machine gun that everyone wakes up to the dangerous situation and begins to scramble and scream.  It’s all indicative of how Mann doesn’t just want it both ways (extreme cinematic license AND hard-hitting reality), he expects to have it.  What we end up with is a mildly xenophobic finale that’s both unintentionally ridiculous, but also evident of an attitude of Western superiority that quite frankly, in 2015, feels like a very dated attitude.

Looking at Blackhat’s action scenes, there are certain shots that appear to be shown at perhaps 48 frames per second as opposed to the standard 24, an effect that results in a far more “open window/you are there” immediacy.  I wondered if the version I saw was a 48 frame screening that’s comprised mostly of 24 frame footage.  I got no straight answer, but one thing’s for sure – Michael Mann was more interested in pushing digital video technology into his house style than just about anything else.  And that’s the biggest crime of Blackhat.