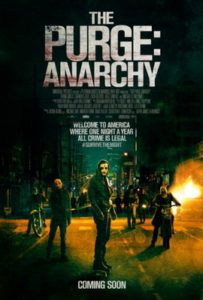 Last year we were introduced to America in 2022.  Having escaped a horrendous economic collapse, the American people have elected a new group of leaders who brought about a new country.  Referred to as the “New Founding Fathers”, this group instituted a yearly event called The Purge where people were allowed to commit all manner of crime for 12 hours, including murder, with no legal ramifications.  The police and other first responder services are suspended during this time and people either “purge” their inner desires, or hole up and try to ride out the night.

With last year’s installment, the nation-wide event was focused on the Sandin family and their attempt to survive a gang of thugs who basically did a home invasion to kill a homeless man the Sandin family was hiding.  I wrote then about the theological implications of this film which you can read here.  While the film was successful, many felt that by focusing on just one family in one location, that it didn’t fully capitalize on the nation-wide terror and anarchy that exists in a night such as this.  Apparently, for the sequel, the people have spoken and the studios listened.

The Purge: Anarchy is the second installment in this series, and features James DeMonaco back in the director’s chair.  The film seeks to follow 3 groups of people.  One is a mother and daughter, Eva and Cali (Carmen Ejogo and Zoe Soul), who are targeted by the army for some nefarious purpose the night of the purge.  Another is a husband and wife, Shane and Liz (Zach Gilford and Kiele Sanchez), who are targeted by a gang of youths donning the masks and adopting the mannerisms of the youth gang from the first film.  The third is a man named Leo (Frank Grillo) who is heading outside, armed to the teeth, to not purge as much as get revenge for a loss he suffered.

While this sequel is supposed to open things up and provide even more chaos, and well, as the title suggests, anarchy, the fact is that this film seems pretty tame compared to the original.  There are some good moments, but everything in this film feels contrived, surface level, and forced.  DeMonaco directs the film banking on you just being on edge because the annual purge is about to commence.  Too often, however, I found myself wanting to laugh out loud at moments that were supposed to have induced feelings of fear and tension.

As the annual purge begins, we follow each of the characters trying to survive until a series of events brings them together.  The feel of the film during these chase and survive moments reminds me more of the movie Judgement Night, where Emilio Estevez, Cuba Gooding, Jr., Stephen Dorff, and Jeremy Piven are trying to escape being hunted down by Denis Leary.  That film was 20 years ago, but sadly, we’ve really made no real improvements in the tone of such a pursuit, even though The Purge is couched in arguably a better, more updated scenario.

The class warfare theme is still in play, and even more so as we get scenes of wealthy white people paying the families of sick, poor people for the right to simply kill the sick one as a sort of mercy killing. It also enables the wealthy, who would never stoop to hunting people on the streets, a means to purge.  There is also a purge auction where the wealthy bid on the rights to put people in an arena and hunt them for sport.  While this sounds interesting, and a much bigger concept than the home invasion focus that constituted the first film, here it just feels tired.  Having already seen people in an arena trying to survive in the last two Hunger Games films, or from films like Arnold Schwarzenegger’s The Running Man, or Ice-T’s Surviving the Game from the 1980’s and 1990’s, this offers nothing new.  Also, the conversation The Purge: Anarchy alludes to regarding white privilege who are victimizing minorities in the annual purge event is never really dealt with other than casting.  It is another case of showing potential, but never dealing with the substance.  It addresses class warfare, not as commentary, which would be interesting, but simply as a means to string the story’s violence together.

Like any class warfare film, there is also a counter-movement seeking to undo the New Founding Fathers.  Their leader is dressed much like a militarized member of the Black Panthers who seems to hack into internet and television feeds as needed.  We aren’t really given much about him other than what Cali is able to tell us since she “follows” him online.  This could have been a good way to explore the political movement behind the purge, but alas, it is also delivered as surface-level window dressing for a deeper part of the story that could be shared but isn’t.

The disappointment of this whole series, despite some decent performances in both films, is the default of the series to go for cheap thrills and gore at the expense of the deeper political narrative that could be developed.  Such a narrative could drive the true horror that would scare anyone.  Namely, that a group of people could elect an administration to rule us and then, to control us, pit us against one another exposing the racial, economic, and sexist class structures we still foster and support, despite saying we don’t.

This is where the theology of the whole event is interesting, as I mentioned last year, but in this film, even those implications are muted.  The view that we are just animals is present, but no time is spent really showing us another side.  We get quick scenes of 5 people working together, and the final scene of the film deals with exploring whether we are capable of not giving in to this violent, animalistic nature, but it’s all dealt with in such a shallow manner.  It even gets corny with people praying in the name of the New Founding Fathers before they purge simply to try to be creepy, but it leads us nowhere and challenges nothing.

In the end, this film covers 12 hours of the purge, but really doesn’t advance the overall concept at all.  And to make an unsettling comparison, without, hopefully, offending anyone who might struggle with this very real issue, I think that The Purge: Anarchy is very much like those who eat and purge their food.  In some regards the meal tastes fine going down, but when it is brought back up, it only leaves us feeling empty and provided us with no substance.  Such is this film, and this entire series.  Hopefully, the studio will “purge” the thought of any more.