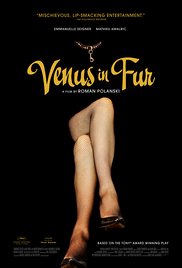 Roman Polanski, at age 80, has made a lot of movies in his distinguished directorial career. Although he’s regarded as a noteworthy auteur, a filmmaker with favored themes and tropes, it’s interesting to note that his most distinguished mark is within the horror genre. And while his go-to masterpiece, Chinatown, may not be a horror film per se, it is one of the single most twisted films to come out of mainstream Hollywood. After a lifetime of fame, infamy, and ducking the law, Polanski remains as reviled as he is celebrated, one of the world’s few truly international directors.

His latest, Venus in Fur (in French and German, with English subtitles), splits the difference, borrowing horror tropes to underscore the themes of the piece. As a non-genre specific entry that nonetheless sets viewers on edge, it’s comparable to his early film Cul-De-Sac – but actually rooted in something. Like his A Knife in the Water, and others, there are details that go deliberately unexplained. (Why an Old West stage set? This speculation alone could be an entire essay.) In Polanski, such threads are just part of the tapestry. It just so happens he’s woven one of his best in a while. Seemingly simple as both a story and a film, the mature-themed Venus in Fur is witty, sharp, engaging, and ultimately beguiling.

So is Venus in Fur just another movie looking to make a statement for the greater good by being that which it purports to criticize? At times, it can’t help it.

The film opens as the camera floats along a sightly French drag, flanked majestically by trees and grassy patches with benches. Lovely, except for the fact that it’s storming – grey and drippy – and not a soul in sight. A calculated swerve (well timed with a lightning clap right out of a Universal Studios horror movie) takes us up to the front entry of an old theatre, just as the doors swing open by themselves. And in we go. 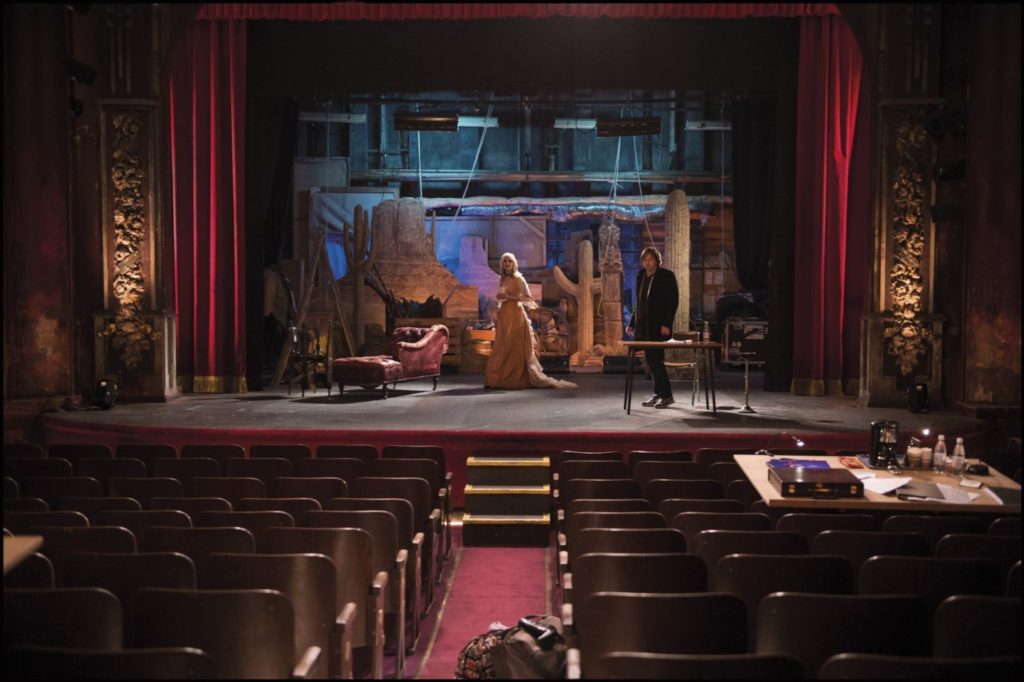 Emmanuelle Seigner plays Vanda, an aging actress, clearly both skilled and driven in her hunger for the part. She’s late for an audition for an original stage adaptation of Leopold von Sacher-Masoch’s sadomasochistic 1869 novel, “Venus in Furs”. In the mind of the play’s adaptor/director, Thomas (Mathieu Amalric), the fact that it’s centuries old and is now regarded as a literary classic renders its highly troubling sexual aspects okay.

Vanda (sharing the name with Sacher-Masoch’s female lead) is desperate enough as an actress to not just coerce an after-hours audition, but also stanch enough to as a woman to periodically stop the process to lay into the celebrated man who’s opted to make this his next work. She maintains that it’s not okay – even if we’re not always sure that Polanski completely agrees with her. 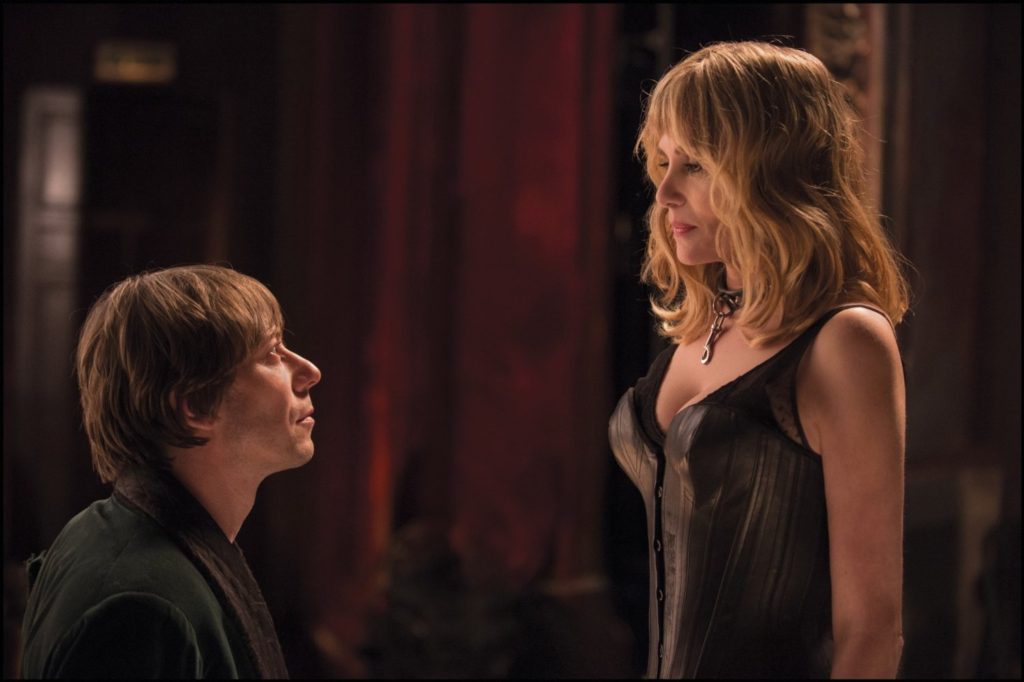 That Seigner is Polanski’s real-life wife of many years makes the tension of the film all the more compelling. That Amalric is a dead ringer for a much younger Polanski renders it all the more meta. Indeed, other critics have pointed out that only Roman Polanski could’ve made this film – a conclusion that can be arrived upon without knowledge of the real-life parallels. The filmmaker co-wrote the screenplay along with David Ives, the author of the play it’s based upon. The Velvet Underground song of the same name is only mentioned, although Vanda’s shiny boots of leather do factor late in the story.

That the play’s title differs by one letter from that of its source material is not a throwaway detail. Throughout most of Venus in Fur, once Vanda secures her audition, complete with Thomas in the opposing role for practicality sake (or is it?), they being to slowly become the characters they’re playing, alone in the theatre. But as we watch these incredibly precise actors playing performers playing nineteenth century dominant-submissives, it becomes apparent that despite Vanda’s provocative streetwalker attire and dog collar with leash clasp, there’s something more to the process we’re witnessing. Some kind of value judgement, some kind of hell – in which the one-time wielder of power is slowly undone by being made to live his own vision. 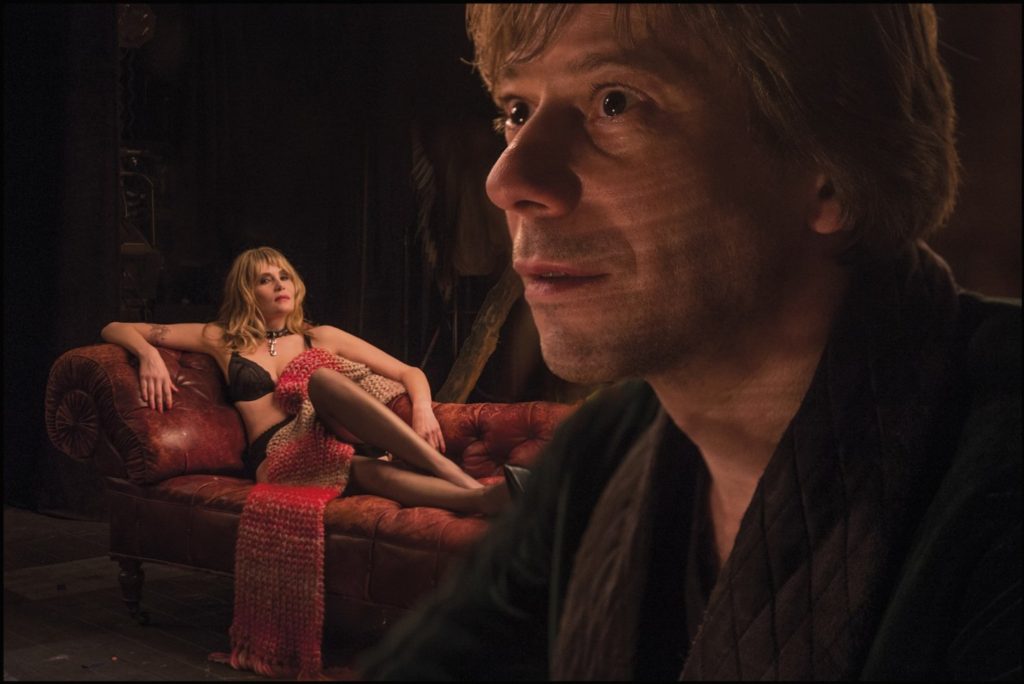 So is Venus in Fur just another movie looking to make a statement for the greater good by being that which it purports to criticize? At times, it can’t help it. Seigner, for all her character’s harsh words about how Thomas’ play is demeaning towards women (“classic” or not), looks great in her corset and thigh-highs, and completely owns them. Like Rob Zombie or Jean Luc Godard before them, there’s an aspect about it all that Polanski is simply still proud to show off his attractive wife. That we can almost envision Seigner directing her female empowerment diatribes at her husband around the kitchen table as he perhaps momentarily considered mounting a film version of “Furs”, not “Fur”, feels almost intentional.

There are tossed-off clues amid the dialogue and asides in regard to what bigger forces might be at work in this theatrical-minded haunted house tale. Rest assured, it’s nothing comfortable or easy. It’s the battling tensions that are present at every level of the taut Venus in Fur that give it depth. It’s the brilliant, can’t-look-away performances of Seigner and Amalric (a film director in his own right) that keep it potent. But it’s Polanski’s courage, vision, flair, showmanship, framing, and perhaps even admission that brings it all together. To be sure, Venus in Fur, as it simmers convictingly in the footlights, is one of the iconoclast director’s late-career highlights. 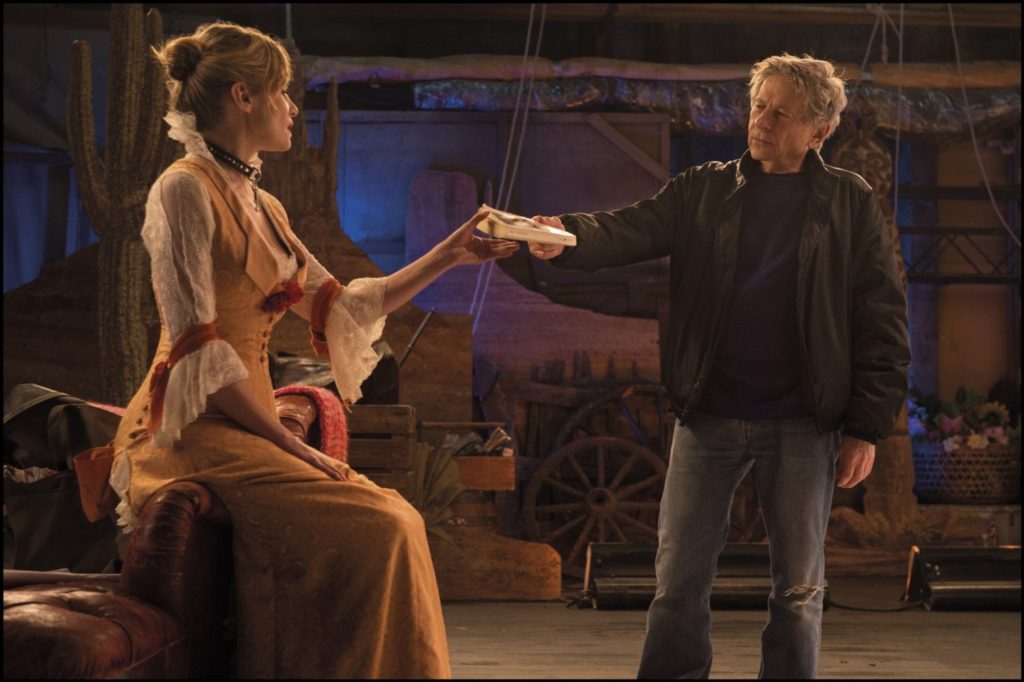