DAWN OF THE PLANET OF THE APES – Film Review

Why This Sequel Can’t Quite Rise 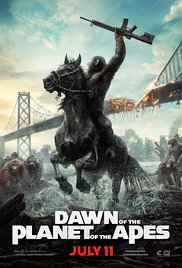 It takes a lots of chutzpah to make, market, and deliver a highly anticipated visual effects driven summer blockbuster that has this many sequences of apes sitting around ooking and awking at one another for minutes on end. Sure, we’re made privy to the content of their simian chatter via subtitles, and yes, it drives the plot along. But rare is the summertime escapist fare that demands quite so much reading, much less of deciphered monkey grunting.

Ordinarily this kind of cinematic brashness would earn a movie more points in my book than I’m currently willing to give to Dawn of the Planet of the Apes – a very good but not great sequel to 2011’s astonishingly well crafted Rise of the Planet of the Apes. That both are high-end prequels to 1968’s science fiction landmark Planet of the Apes – a solid film that features long stretches of actors in ape makeup sitting in adobe rooms engaged in philosophical exchanges with a shackled, loin-clothed Charlton Heston is the unspoken everything to this new series. Never mind the irony that the new films, like the apes themselves, have evolved to higher production and narrative standards; nary a drop of liquid latex or non-CGI fur to be be found in them.

Dawn is not brilliant, but it reaches well in that direction with ooking and awking apes to intellectually consider, even as the popcorn nature beckons that you will believe an ape can talk.

There are plenty who are preferring Dawn‘s dystopian torches & rifles ramp-up to war over the domestic Rise‘s unexpected surprises – primary among those surprises the revelation that James Franco is in fact not the star, but a computer-rendered ape named Caesar (Andy Serkis) is. But I won’t be among them. Sure, Dawn moves the whole of the Apes saga along respectfully. But Rise was (and still is) a special kind of sure-handed cinema. The reward of its experience lies not in the details of what is happening, but in how what’s happening is depicted, rendered, served up to us. Dawn by comparison is heavy laden, and simply too non-engaging at times. 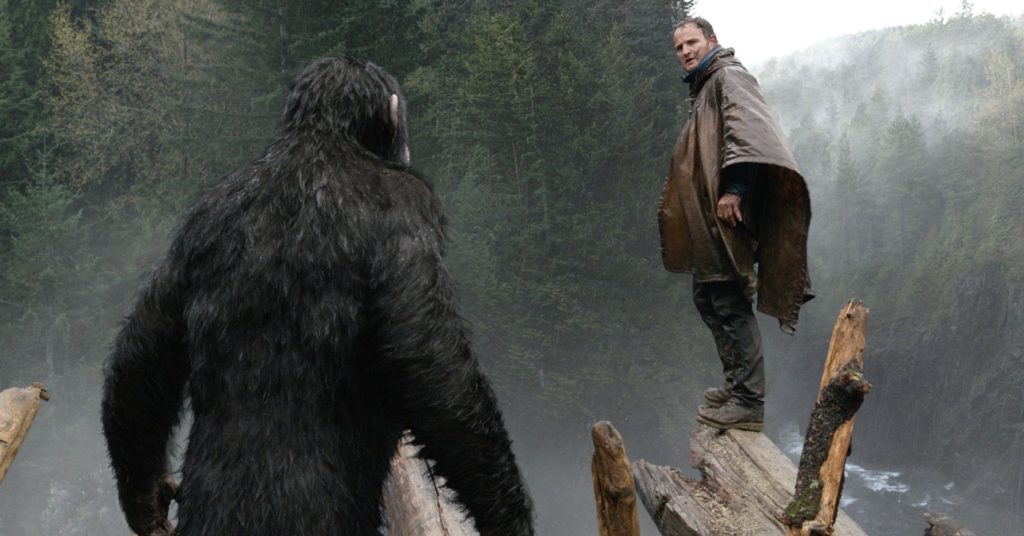 2011’s Rise of the Planet of the Apes is the rare restrained summer blockbuster that nonetheless delivered, and then some. A careful blend of grounded humanity and event film spectacle, bringing a very necessary gravitas to the proceedings, causing us to effortlessly glance right passed the utter ridiculousness of the entire premise. There’s a lot right with Rise, and almost nothing wrong. The only criticism that could be leveled is toward that of its very prequel pedigree; being a precursor to a perfectly fine original (1968’s Planet of the Apes) that never demanded any explanation of previousness. Yet, that completely doesn’t matter. Rise of the Planet of the Apes might just be the finest franchise prequel ever made.

And Dawn, directed by fan favorite Matt Reeves (Let Me In, Coverfield), is a respectable follow-up. It even trumps its predecessor in terms of leaving out the gaggle of awkward winking references to the classic Apes series. Hearing Heston’s iconic “damn dirty apes” line echoed by Tom Felton was one of the film’s glaring flaws that critics love to string it up for. But I forgive it such indulgences (on this Planet, it’s easy!), just as, on the flip side, Dawn‘s lack of them doesn’t elevate that film. But Dawn does sport some problematic 3D, which is useless as best, glaringly awful at worst. In one moment, a complexly layered long shot of a large group of apes is unintentionally reduced to an arrangement of moving flat layers – some kind of photo realistic paper cutout animation, making the whole sequence ring fakity-fake, fake, fake. And it’s not the only one. Whatever you do, and however you feel about the rest of what I have to say, avoid seeing Dawn of the Planet of the Apes in 3D. 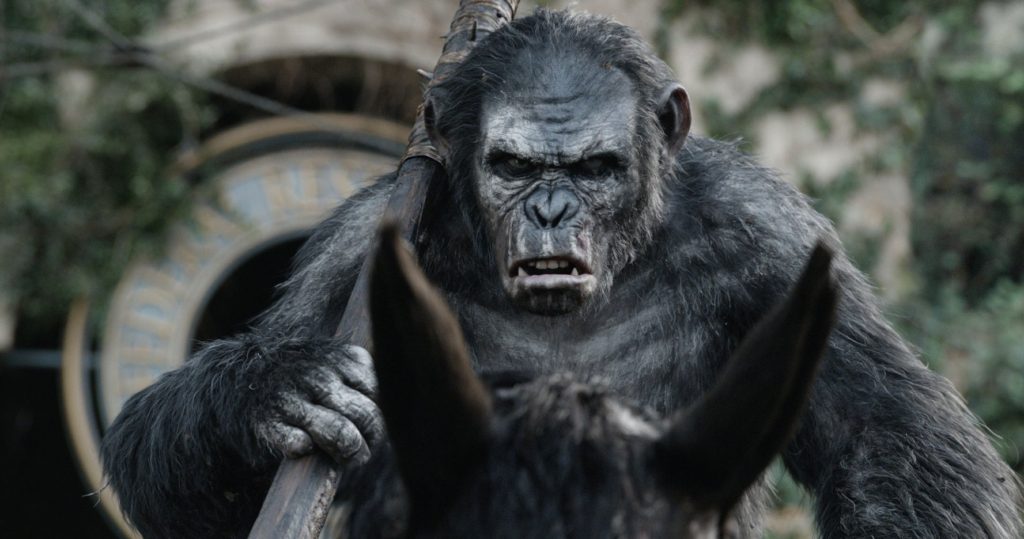 3D aside, however, there’s no shortage of dignity in Dawn. And you can feel it working for that dignity throughout. At times, the storyline takes a backseat to personal matters. At one point, we spend a couple of minutes with Gary Oldman’s character (yes – it’s another major franchise for Oldman!), who experiences a sudden but tangental emotional reaction. It’s a moment that wants to ground the whole of the film in a certain internal human reality so often altogether missing from blockbuster summer movies. But on the other hand, it seems possible that this scene is in the movie only because they got Gary Oldman to play the part, and wanted to give him a few more choice moments. Whatever the case, Dawn is ultimately all the richer for it.

It’s admittedly dizzying, trying to arrive at what it is exactly that offsets a perfectly noble modern day effort such as Dawn of the Planet of the Apes. It’s not just that it doesn’t measure up to Rise. (Few follow-ups would). In a film so full of solid performances, memorable villains, and umpteen shades of grey (many covered with fur), it must lie in the broader execution. Yes, this is another glaringly self-serious popcorn movie, that right there an inherent contradiction. It, like many since the summer of 2008, is searching for that that Dark Knight chord. But, if it (or Rise) were to lack the weighty tone and social commentary reflective of the unflinching ’68 original, it wouldn’t be a proper Planet of the Apes film. (Kudos to all involved for not going lighter, as tempting as it must‘ve been at times.) 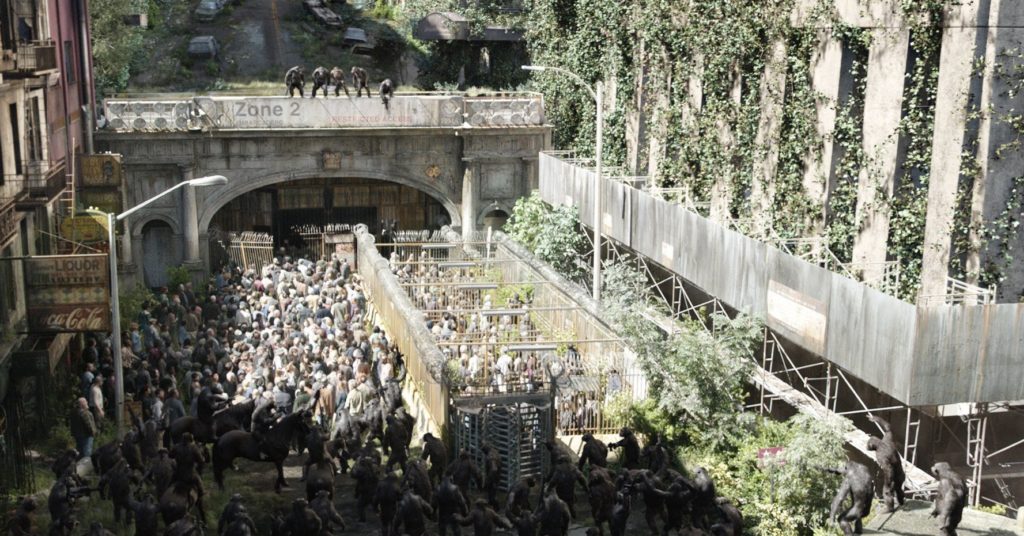 Perhaps the nagging imbalance (as subtly perceived as it is) is simply indicative of the fact that today‘s audiences and filmmakers have little or no sense of the 1968 cultural pressure cooker that yielded Planet of the Apes, and therefore any attempt at tonal emulation, no matter how distinguished and well crafted, can only ever be just that – emulation. It’s like watching a very well mannered and articulate 14 year old impress us by trying to act like an adult. There are certainly far worse things to watch, but if you subscribe to the school of thought that each movie belong to the time it’s released in, (and you should,) you also must concede that although 2014 has no shortage of major issues worthy of serious science fiction commentary, the late 1960s turbulence emulated in Dawn cannot be felt in the way that any number of today’s headlines would resonate. (Another observation in Rise‘s favor, if the two films must be pitted against one another.)

Lest we forget, in 1968, there was the Vietnam War, France was on fire with traffic jams, and militant racial tension was spilling into the streets. The social context and action of Dawn dresses up as these issues – and almost, almost gets away with it. You could, if you wanted to, play “Street Fighting Man” by the Rolling Stones over certain unrest sequences, and it wouldn’t be out of place. Instead though, Reeves treats us to one song and one song only, and it’s practical within the film. It’s one of my very favorites, so I won’t spoil it. But it’s a moment of properly honed weight in a film that so badly wants it throughout.

Dawn is not brilliant, but it reaches well in that direction with ooking and awking apes to intellectually consider, even as the popcorn nature beckons that you will believe an ape can talk. And conspire, and love, and fight, and ride a horse. And that’s what it’s really all about.