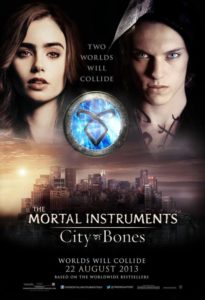 Lily Collins (The Blind Side) is the face of an all new movie franchise that is seeking to stake out ground left unattended when the Twilight series wrapped up their final installment.  The Mortal Instruments is a book series by author Cassandra Clare.  The film takes the title of the first book of the series (there are 5 written with one on the way), but from the screening I attended, many of the book lovers felt the title was the only similarity the movie had with the book series.

The story follows Clary Fray, who begins to have visions of a symbol, and becomes obsessed with drawing it over and over.  She even sees this symbol on nightclub signs and in her cappuccino. When her mother disappears, she begins seeking out the answers to the symbol, as well as her ability to see things that her friend Simon (Robert Sheehan-Season of the Witch) cannot. And as a side note, she also would like to find her mom.

Eventually she meets up with Jace (Jamie Campbell Bower-Twilight Series) who is a Shadowhunter, a race of decendents from an angel who are the sworn protectors of this world, fighting demons.  She can see him while others cannot.  From there she learns of the shadowhunters and that all of the stories of legend we have in our world are also true.  There are witches, warlocks, vampires, and werewolves all around us participating in a never ending battle of good vs. evil.  (We do learn that there are absolutely no zombies. Those stories are apparently not true.).  As Clary learns more, she will come face to face with her true identity, and a secret that her mother has been hiding from her for her entire life.

There are moments of fun, and even some clever jokes thrown in here and there, but otherwise the film is uninspired. Mortal Instruments: City of Bones really is aimed at the tween crowd, despite disturbingly dark subject matter (considering the age range that will find their way to this film).  It is also decidedly seeking to appeal to females.  A “Jacob vs. Edward” type of love triangle is set up in this film that I guess will have ramifications in future installments (production is already starting for the sequel in September).

The problem with Mortal Instruments: City of Bones is that if you haven’t read the book series, then you will not even fully understand what is happening on the screen.  The writing of this film leaves major gaps of plot, character motivation, and the relevance of why things are happening, completely out of the narrative.  We don’t even really know anything about the demons who are the driving force of evil for the film.  Are they the archetype of fallen angels from the scriptures, or something else entirely that is unrelated to Satan, the devil, etc.?  We learn that the shadowhunters descend from an angel named Raziel, yet the shadowhunters in the film have never seen an angel and are depicted as not even really believing in them at all.  This makes no sense as they obviously have powers to fight the demons and these powers must have an origin outside of humanity.  Why is Clary carving something into her skin and where did she learn how to do it or when the best time to use it?

We are told that certain groups amongst the vampires and werewolves have a truce with the shadowhunters but we are given no information on any of these groups, their relationship with each other, or their aims.  They, along with the romance, seem to be in the film simply to check off elements that studios believe appeal to teen-girls:

The romance of this movie is simply silly at times and some people in the audience laughed aloud at some of the ways young love was portrayed (wait, was that me laughing?).  You might have caught wind of what I’m referring to in bullet-point #3 above. There is even a suggested incestous relationship that will have to be resolved in a future installment, much like Luke and Leah had in the original Star Wars film.  Though, this one seems more creepy.

Finally, there is a rogue shadowhunter-gone-bad that is given a brief shout out early on that serves as a set up to what is driving the conflict on screen, but he does not even show up until the final 20 minutes of the movie. His arrival seems to simply be tacked on as the expected final showdown all movies of this type must have, and not organically as the natural outflow of the conflict we’ve experienced thus far.  There is some relevance to his having a relationship with the lead characters and the struggle they have been facing all along, but you really won’t care that much about it.

I think the word that best describes this lackluster film is apathy.  The characters seem uninspired.  The plot is lazy, and the details are lacking to create as vivid of a world that the books seemed to have made in the hearts and minds of millions of readers.  And if all of these things add up to a film that doesn’t really seem to care about what it is trying to show us, then why should we care to watch it?