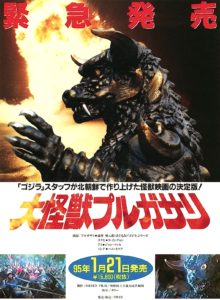 I realize I’m in a quiet minority, but I’m bound by a DNA-imprinted love for quaint and questionable fare to always say “yes” to watching a man stomp around in a rubber monster suit.  It’s a weakness that’s never left me.  You can still catch me watching Godzilla vs Megalon or Gorgo or The Land That Time Forgot, but you won’t see me laughing derisively – you’ll see me smiling warmly at the memory of childhood belief.  In the case of 1985’s despot-bankrolled Pulgasari, which I’ve just seen for the first time, I’m a sucker not only for the direct, electric connection to my pre-teen taste for the destruction of miniature sets, but for the way this particular specimen subverts the expectation of three-gong cheese with ever-so-brief flashes of weighty political ornamentation, pop mythology of the North Korean kind, and moments of legitimate cinematic flare.  It’s just the kind of thing that hits me right in the nexus of personal nostalgia and fascination with political history – it’s dyed-red communist propaganda in the guise of one of the most magnificent giant monster movies I’ve seen.

Spend a few minutes with the movie and you’ll laugh me off this site.  I’m okay with that.  It’s not on par, especially at first glance, with the somber greatness of the original, pre-Burr Godzilla (1954), but fall into the broad, theatrical rhythm of the movie and you might see how Pulgasari’s dark, surprisingly rich connection to the plight of humans under political duress builds up a poignancy that, like Godzilla, transcends the wanting quality of the special effects.  In this case, the movie’s not as much a chilling allegorical frame placed around the radioactive grief of a country’s recent tragedy as much as it’s a prescient and anguished, even operatic, cry of a people whose grief was yet to be wholly manifest. 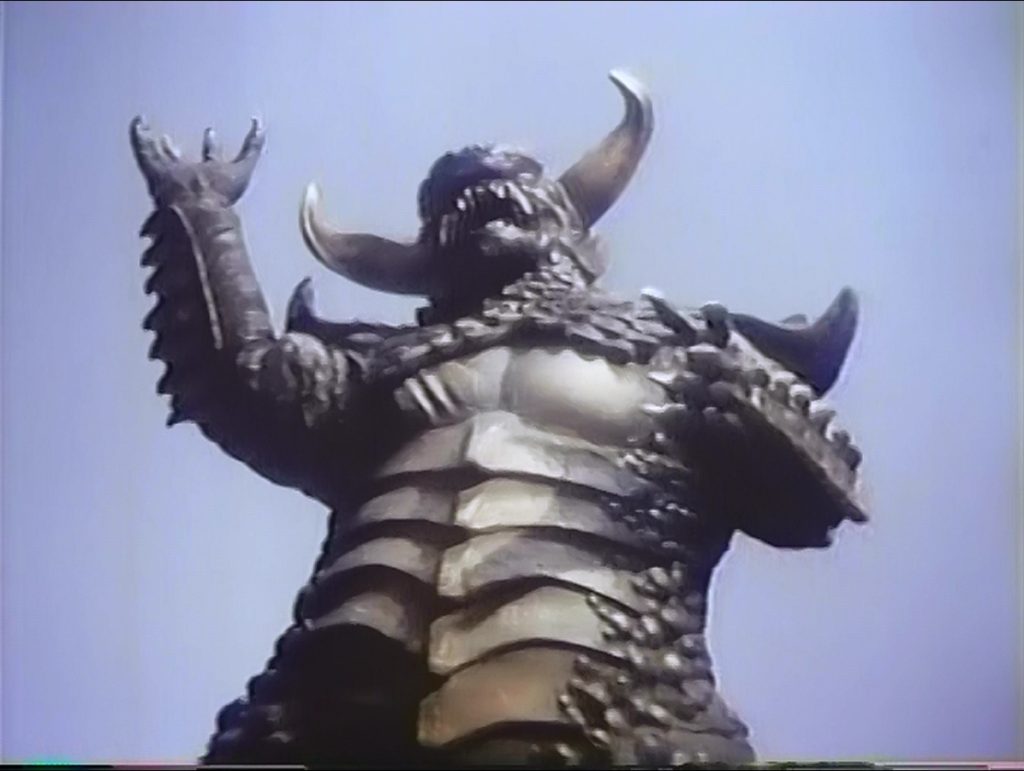 Pulgasari was green-lit, you see, by the most unlikely of movie moguls, “Dear Leader” himself, Kim Jong-Il, when he was just a 40-something upstart heir apparent, working out his jealous fascination with the teeming culture beyond his borders via a slate of films he sanctioned throughout the 70s and 80s, some of them – like Pulgasari – directed by a filmmaker, Shin Sang-ok, allegedly kidnapped out of South Korea and into forced creative labor.  None of the films saw the light of day but this one, and you have to wonder if it was a point of pride or embarrassment down at the palace, given the movie’s premise:

In feudal, sword-wielding Korea, a tiny doll made of rice and earth, crafted by a dying old peasant, lolls to life under the single drop of his daughter’s pure blood, consumes all the raw steel in sight until it’s the size of the UN, and becomes the lumbering, horned and armored confidence of the people as they throw off the yoke of their evil, oppressive leaders. 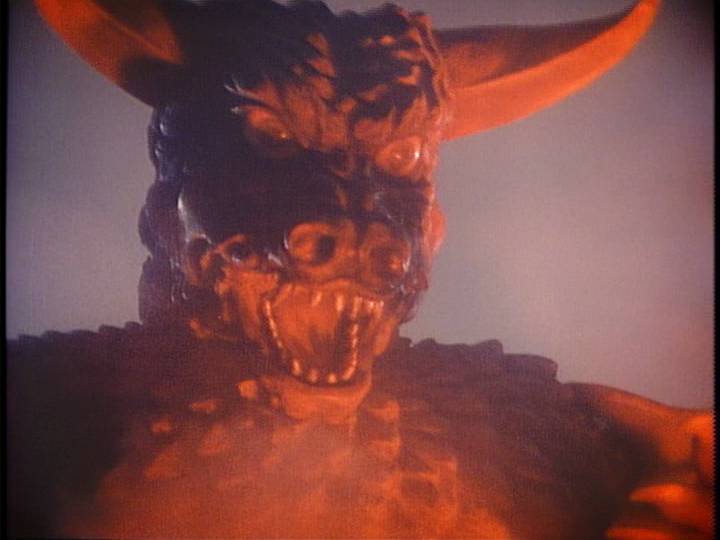 At first I was confused that a movie okayed by an oppressive regime would feature as its core drama an uprising of peasants… against an oppressive regime – was this an exercise in megalomaniacal denial?  A blind, unself-aware hubris?  Until I learned that Kim Jong-Il declared any story set prior to North Korea’s embracing of communism should be represented as chaotic and corrupt.  This leaves room for the lower class underdogs to be portrayed as innocent and true, and their government (representing pre-communist Japanese occupiers) to be shot through with cataclysmic arrogance and knee-jerk belligerence, not to mention comical incompetence as idea after idea presented to destroy Pulgasari fails miserably.

By the time the governors, kings, and generals have seized the holy farmers’ tools of replenishment and turned them into weapons of destruction, it’s time for a hero to rise.  Enter man in rubber suit, as symbolic of the unity of the collective as it is, by the end of the movie, a symbol of the ease with which over-consumption of goods (in this case, an infinite buffet of the world’s steel) can drag industry into lethargy.  When the movie’s “twist” arrives, and the righteous engine of vengeance becomes an inert layabout demanding more and more of what the peasants no longer have, the message is clear: we need communism, because communism will save the world from itself!

In this case, the movie’s not as much a chilling allegorical frame placed around the radioactive grief of a country’s recent tragedy as much as it’s a prescient and anguished, even operatic, cry of a people whose grief was yet to be wholly manifest.

Despite the high-profile politico pulling the strings, the movie carries the pock marks of a woefully anemic budget, suffering as it does from high-school-stage production design, an overdependence on creaky, just-line-‘em-up character blocking, outdated – even for then – rear screen, gilded-cardboard acting, poorly translated subtitles, and enough continuity errors to feed a village, yet it still sports a quiver of filmic allusions that could lend an air of possibly accidental street cred amongst the legit kaiju crowd: intended or not, there are reflections of everything from Godzilla, to Harryhausen (the monster’s ominous growth spurts mirror the Ymir of 20 Million Miles To Earth; the beast turns to stone and breaks apart in a nearly shot-for-shot copy of the Kraken in Clash of the Titans [1981]), to Kurosawa’s always urgent samurai pictures, to the burning sacrifice of The Wicker Man (1973; the emotion wrung from simply dropping out the music while Pulgasari is “burning to death” inside a raging inferno speaks to the nuance and talent of its captive director), to Dino De Laurentiis’ overgrown animal diptych King Kong/The White Buffalo, and beyond.

Nothing at any given moment of the film could ever lead to the assumption of its greatness, but the steady rollout of these quotes, along with dollops of graphically charged and striking imagery (a woman is crushed by the wheel of a cart; an old woman is beaten and tortured with sticks in front of a small child; the fire-reddened monster, smoke ebbing away from him, positively engorged by steel and fire and looming righteously over the king’s scattering squad of cowards like a giant Satan and then boiling them alive in the sea), and all of it wrapped in a cloak of warbling, synthesized 80s Asian music that gives the monster a sort of embraceable, kitschy pathos, allows the movie to continually rise above its construction paper flimsiness.  There’s even a believable sense of scale, relative to most of the picture, during the battle scenes between the peasants and the king’s men, complete with chaotic group-on-group swordplay and exploding hillsides.  Several money shots adorn the proceedings, most of them successful for the sheer number of people in the frame – crowds that are, one must haltingly assume, composed of actual unpaid and starving peasants. 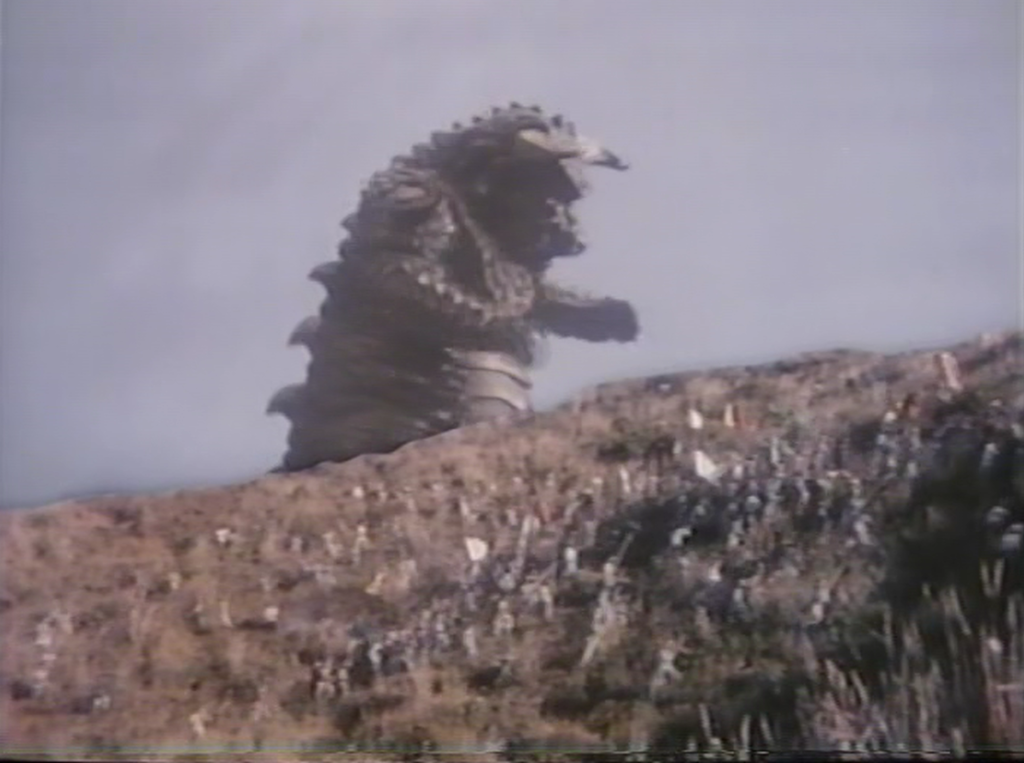 The final note of the film, the devolution of the redeemer into a fatigued, lounging god, is one of satire, nudging it close to, but not quite inside, the world of Dai Nipponjin (“Big Man Japan”, 2007), with its tired, lonely giant killer and its slow-motion critique of capitalist excess.  It stands, also, in a long line of stories that feature young and/or innocent protagonists thought-bonded to a large, sentient creature, including: virtually every Godzilla movie after the original; the tv series Gigantor and The Space Giants; The Iron Giant; and the Transformers tv and film series.  I’m fascinated by the perpetuation of this device – the befriending of a killer monster or machine and the turning of that friendship toward the rescue of the world.  It’s a silly idea from the mind of a small boy, and it’s that lack of guile in the center of the idea that keeps me always looking forward to its next incarnation.

I’m realistic about Pulgasari not appealing to more than a scant few.  It’s a niche movie within a niche sub-genre, easily mocked because of the easily mockable man who demanded it be made, and easily relegated to the failure column for its surface “badness” – or at the least, consigned to the “so bad it’s good” column.  But it’s more than that.  The stirring mythology at the heart of it, married to the wobbly but earnest and sometimes near-operatic performances, and carried along by a nascent (but eventually recognizable) awareness of cinema and its place in it, makes it, for me, a nugget of irresistible gold.