Reel Theology: THE SHAPE OF WATER 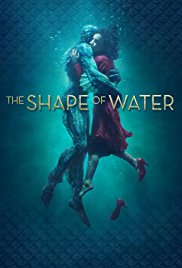 Can a monster learn to love?

If that were the only question posed by Guillermo Del Toro’s latest film, The Shape of Water, it would do little more than retread the same waters filmmakers have explored for decades. The question of whether or not a monster can be made human—made human through love, no less—is hardly a new one; it’s a staple in the world of stories. Instead, The Shape of Water delivers a myriad of thought-provoking and surprising themes, the most surprising of which is perhaps the relationship between intimacy and faith.

“The locals worshipped him. Thought he was a river god. They’d throw flowers and fruit into the water,” government blackhat Mister Strickland (Michael Shannon) explains, caught halfway between a sneer and a smirk, between mockery and awe. It’s easy to believe. Standing nearly seven feet tall and clad in bronze and blue scales, the being—who remains nameless throughout the film—is rather breathtaking. Much like the audience, everyone in the film is rather transfixed by him in one way or another. Yet it is Elisa, a functional mute who works as part of the cleaning crew in the facility, who becomes most enamored with him.

The Shape of Water is a fairy tale in the truest sense. It is at times comic, at times gothic, at times grisly, and at times loving. It shies away from nothing.

Elisa, played by Sally Hawkins, has been mute since she was young, but has learned to function and participate in society’s schedules with great efficiency. There is a rhythm to her world and a rhythm to theirs, and she slips easily into sync with one and out of the other as the need arises. It is a decent, if rather loveless life. It is not until she begins to visit and interact with the creature that we begin to truly understand her profound loneliness. In turn, her loneliness and her subsequent willingness to be vulnerable enough to name it, reveals the bittersweet truth: loneliness is the shared human experience. 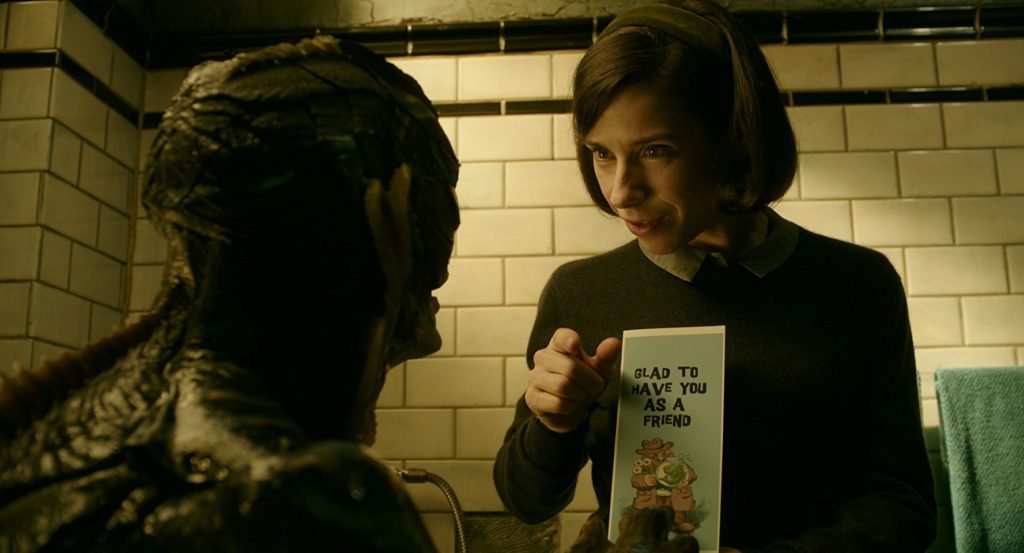 Her best friend and suite mate, Giles (Richard Jenkins) is a closeted gay artist who has recently been let go from his advertising firm. Her friend and fellow maintenance worker Zelda (Octavia Spencer) is an African American woman in a service position in 1950s America, struggling in a marriage with an emotionally distant husband. Hoffstetler (Michael Stuhlbarg), a scientist studying the creature in the American facility, is in fact a Russian spy; his entire identity is a forgery. Even Strickland, the antagonist, is trapped inside a workplace persona he has constructed from fear of failure. Each of them is brought face to face with it, with their lack of being known and this strange common wound, through meeting the creature. A creature who remains nameless. A creature who may be a god.

In our post-modern, post-Dawkins culture, our collective attitudes towards God and religion have shifted largely towards the negative. Generally speaking, most people seem to ask what purpose faith now serves in an “enlightened society.” It is painted as something purely liturgical, a ritualistic experience for assuaging anxieties that is largely devoid of emotional engagement. The party line for the pseudo-spiritual generation is a caveat, a disclaimer: “… but not religious.” However, in throwing out the river god with the bathwater, a longing for something greater and more intimate has become a shared cultural experience. As we look more and more askance at religion, we have simultaneously become more and more lonely. We are unsure of our place, our purpose, and our relevance in the universe.

This is one of the many beautiful and surprising ideas to be found in The Shape of Water — the relationship between humankind and the divine, and the insistence that it is not something purely doctrinal but something surprisingly, heartwarmingly, and even a little uncomfortably intimate. Indeed, there are moments shared on-screen between leads that are so beautifully tender it feels almost wrong to be privy to them. Chalk that up to the unbelievable, Oscar-worthy performances of Sally Hawkins and Doug Jones, who were each given tremendous challenges as actors. One is mute. The other is 100% obscured by makeup. 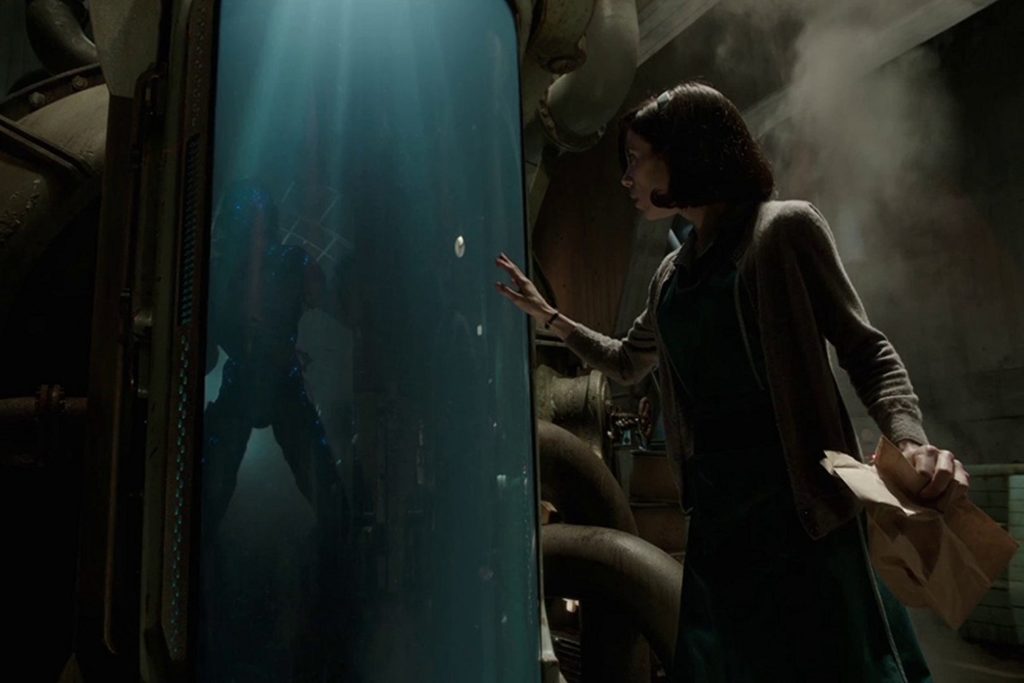 The rest of the characters, and the way in which they relate to the creature speak to a wide array of spiritual experiences. Strickland, scornful of the river god, serves at the behest of a false one who is insatiable and views him as entirely expendable: his government, and his own self-image. On the other side, Hoffstetler is in awe of the creature and finds tremendous beauty in it, willing to risk his life and betray his country purely on account of the beauty he sees. And Elisa, for the first time, feels whole and wants nothing more from him than to be with him.

In an attempt to explain her desperation and her need to save the creature, she signs: “He sees me.” The creature, like Elisa, is voiceless, and as such does not see Elisa as handicapped or damaged. He sees her in full, without societal bias or internalized prejudice. He is unburdened by any preconceived notions of what it means to have a disability, or to work a demeaning job, or to even be a woman. And in him, she see also sees something beautiful, something beyond words. In these three, we see the cynic, the philosopher, and the converted.

What does the creature feel? What is his experience of these people, of their efforts to help him? Jones brings tremendous grace and even a level of beautiful honesty to the role, and yet there is still a barrier between the mind of the creature and the audience. This creature, this proclaimed river god, is utterly removed the from human experience, and yet does not condescend to it or belittle it. Instead, he finds it fascinating and engaging and beautiful. He is curious, compassionate, and even protective. 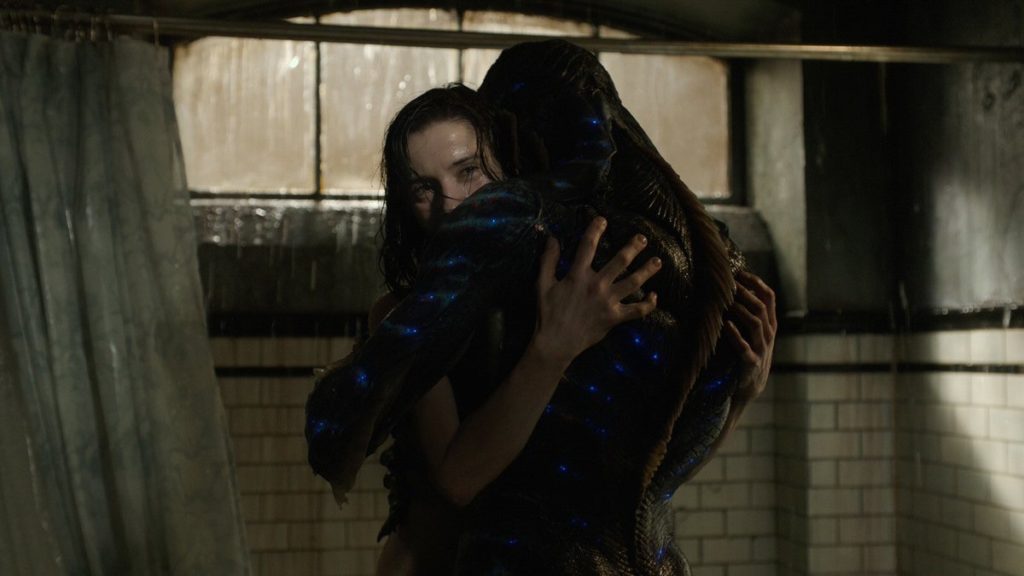 This does not belittle his volatility, his dangerous and unknowable nature. Here is the great complexity of the thing, and this complexity detracts nothing from the love he shows Elisa. Philosophically, this is the concept of true and perfect love, a love capable of loving someone entirely after being able to truly see them. It is a type of love uniquely the purview of the divine. It is the great romance of fairytales, and fairytales have always been used to point the way towards something higher than themselves. A lesson. A value. A hope.

This movie is, of course, a fairytale romance, and that narrative supersedes all others. Guillermo Del Toro is infatuated with the breadth and potential of fairy tales and all they can do. As such, he does not shy away from the monstrous or the frightening, nor does he shy away from what the “educated” (see also: cynical, pretentious) would deem childish, cliched, or predictable. Indeed, the plot itself feels almost derivative. This, however, is not a strike against the film, nor is it a point of weakness in contrast to its strengths. It is the nature of the fairy tale to be complete in both its simplicity and complexity. It is also the nature of the divine.

The Shape of Water is a fairy tale in the truest sense. It is at times comic, at times gothic, at times grisly, and at times loving. It shies away from nothing. It is unashamed of itself. It is what it is. And it is beautiful. And regardless of the story’s intent, does raise the question, however indirectly, of just when exactly we forgot that faith is at its core a romance.