In between 1949’s all-time classic The Third Man and 1953’s staunchly underrated The Man Between, English director extraordinaire Carol Reed made Outcast of the Islands, an ambitious adaptation of Joseph Conrad’s 1896 novel, An Outcast of the Islands.  (Is it redundant at this point to label a Conrad adaptation “ambitious”?  History would tell us “yes”).

Yet, for all its exotic settings (most of the film takes place at an uncharted trading post on an unnamed Indonesian island) and high seas treachery (Watch! As a large ship is steered through a range of deadly rock formations!), Outcast of the Island is something short of a grabber.

A period piece, it opens in Singapore as the infamous and duplicitous Peter Willems (Trevor Howard, ironic one expression and sporting an increasingly ravaged tuxedo shirt) is accused of a crime.  Needing a quick way out of there, he convinces the noble Captain Lingard (Ralph Richardson) to take him on his outgoing expedition.  Lingard, in need of a second pilot able to navigate the treacherous passage to the secret trading post, agrees despite Willems’s many widespread character failings.

The action is slow to unfold as the accomplished cast of actors take every opportunity to dialogue and even speechify. The film leans heavily upon a presumed fascination with colonial era practices and related daring-do.  The perilous voyage out of Singapore doesn’t occur until around the thirty-minute point, and arrival at the trading post only means more time spent to establish that new setting.

The trading post, with its labyrinthian design of makeshift bamboo and cloth shelters and docks on the omnipresent river, is not inherently uninteresting.  But Reed, with less outward style than narrative determination, plows forward as several branches of plot unfurl with the enthusiasm of an ash Black Snake novelty firework.  Nearly overtaking the  waterlogged stodginess of it all is a potent infatuation tangent, as Willems finds himself obsessed with the beguiling young tribal woman, Aissa (portrayed by the singularly named Kerima, a French actress who would go on to marry the film’s Assistant Director, Guy Hamilton [Goldfinger] a decade later).

One look at Aissa and it’s obvious that this is a girl who’s fed up.  Her eyes are locked in a permanent icy glare, perhaps betraying the hassle of being the token teenage beauty of her sprawling tribe.  Or, maybe she’s just done with being perpetually soaking wet, as just about every scene she’s in finds her getting rained on or in the river.  Per the story, she’s fed up with the situation, her tribe being patsies for Almayer (Robert Morley), the fat rich white man running the trading post.  As things unfold, we see that she’s not hesitant about turning to violence to affect change.

Not long ago, I reviewed a three-disc “Film Noir” box set for ZekeFilm.  In it, I felt the need to address the fact that none of the three films, however good they were or weren’t aside from this, were not much in the way of “Noir”.  With Outcast of the Islands, I see an almost reverse situation.  Though no one is jumping up to declare this particular vintage black and white movie a Film Noir, the themes and even some of its visual tropes are very much in place to make it so.  It’s got a male protagonist untethered from his home becoming smitten with a certain type of femme fatale only to witness his own downward spiral and that of this newly adopted world.  And the cinematography by John Wilcox (The Last Valley) and Edward Scaife (An Inspector Calls) has just enough expressionist flair to pass for Noir with the sound off.

But then, take such classification entirely for whatever it may be worth.  We film critics can get terminally caught up in such things.  Such is almost the case with the new audio commentary by film historian and critic Peter Tonguette, who devotes far too many of the opening moments of his rather languid track to explaining why he thinks Outcast of the Island is a “castaway film”.  It’s a bad start to what turns out to be an otherwise truly informative track, as one can almost hear a modern ship’s foghorn in the distance bellowing “WhhhhhhoooooCaaaaaaaaaaaaares” as he won’t let that subject drop.  Tonguette really knows his stuff, and is worth sticking with, despite my own urge to bail out early.  Here’s hoping he can perhaps pick up the pace and lead with better material next time.

Despite the many marks of quality borne into Reed’s grand endeavor with this film, its reputation as one of the director’s lesser efforts is understandable.  That said, Outcast of the Islands is not without its fans.  Tonguette cites filmmaker Monte Hellman (Two-Lane Blacktop) among them, as Hellman listed it among his all-time top ten movies in 2012, that nut.  Therefore, Hellman and the other outcasts who adore Outcast will be happy to know that this blu-ray release from Kino Lorber Studio Classics is a pretty solid endeavor.  They will want to hop this ship straightaway. 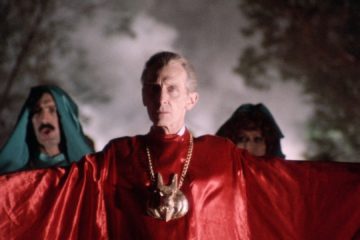 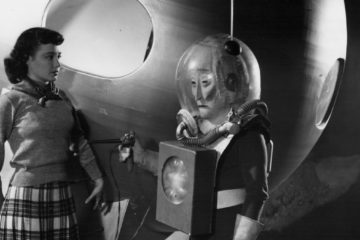