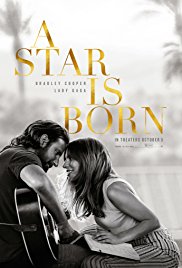 Bradley Cooper has crawled up the rungs of Hollywood, always breaking out of the boxes the public was trying to put him in. After The Wedding Crashers, he could have easily have remained typecast as the antagonistic bully in Will Ferrell movies. But with The Hangover, he muscled his way to leading man. And now with A Star is Born, he has muscled himself up to director and leading man.

Cooper plays Jackson Maine, a character that has lived up to that rockstar name he was given at birth. He fills arenas with adoring fans that he greets with a drunken, drug-induced stumble on stage, a wave of his cowboy hat and then a guitar wail into his hits. He tries to put on a good show, because he wants to give them what they paid for, but he’s sleepwalking through both life and his concerts, and he has a drinking habit that gives Nicholas Cage in Leaving Las Vegas a run for his money.

After a concert one evening, he stumbles into a local drag bar, without realizing what kind of bar it is. Though, it probably doesn’t matter, as Jackson does not seem the righteous or judgmental type. And out walks Ally (Lady Ga Ga) who sings a rendition of “La Vie En Rose”. What Jackson has in attendance at his performances, Ally makes up for in heart at hers. After the performance, Jackson asks her out for a drink, and that sets in motion an emotional roller coaster of a relationship and film.

The first third of the film is magical. The chemistry between Jackson and Ally is both big and small; bombastic and naturalistic. The most perfect moment in the film involves Jackson wrapping a frozen bag of peas around Ally’s hand in a grocery store parking lot, healing her bruised knuckles that she injured on someone’s face in an almost equally perfect scene. 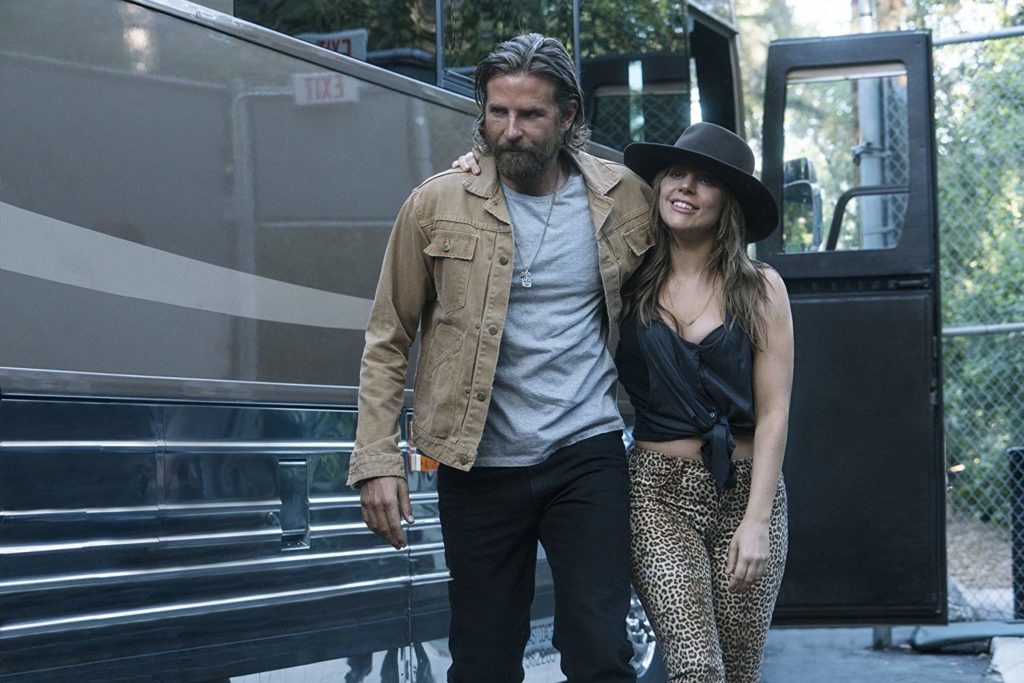 The lightening in the bottle of the first act however gives way to more unevenness in the second and third act. As Ally gets bigger and bigger, Jackson greets her rise with jealousy and more drinking. There is such a boldness to the beginning that seemed to be too good to be true, and unfortunately, with the introduction of both clichés and extreme melodrama towards the end, a film that should be great is reduced to simply watchable enough.

The biggest assets to the film are the performances. Cooper’s performance as Jackson is admirable, even though most of the time he was on the screen he made me want to drink some water and take a nap for a week. Lady Gaga is magnificent. She plays a naturalism so well that when she gets on stage and hits these high notes, you must remind yourself that is what she’s naturally trained to do.

One of the biggest knocks against the film is the love of music doesn’t translate well, at least in comparison to a Damien Chazelle film, for instance. Maybe that’s subjective to me. Jaskson’s form of alt-country (with music written for the film by Jason Isbell and Lukas Nelson) is treated with such disregard by Jackson. And Ally’s form of pop music is un-listenable. There is a scene where Ally is on SNL playing a new pop song that is so bad it makes Jackson walk off and start drinking. Now admittedly, the song is terrible, but on the other hand for Jackson to declare his form of country that he doesn’t seem to care much about anymore is so much better and that she was the sellout seemed problematic. You have one playing respectable music that he doesn’t care about and one pouring her heart out for shallow pop music. The audience isn’t sure where to grab onto. 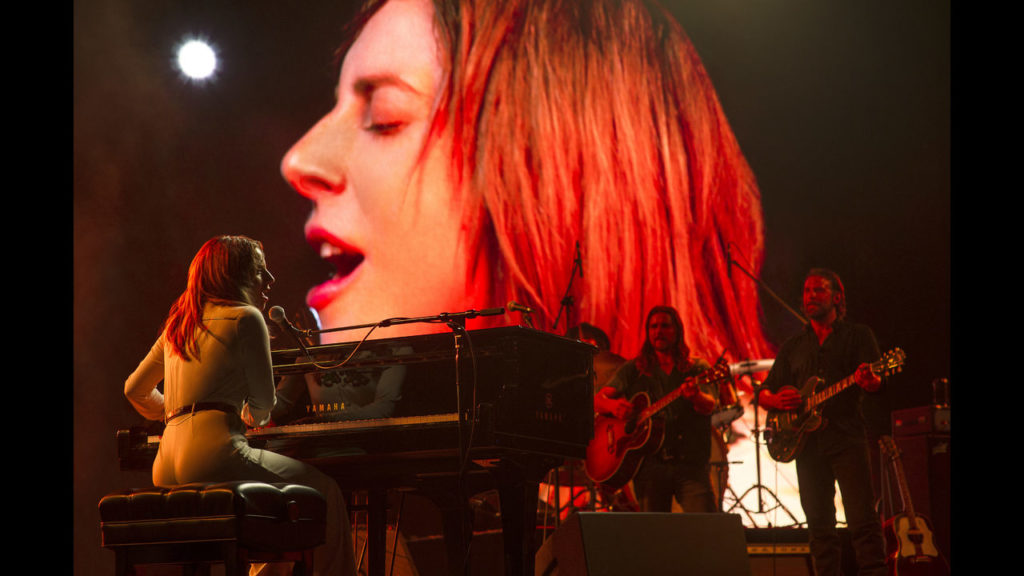 A Star is Born came out of Toronto and Venice Film Festivals with an explosion. But with that praise, I expected a different take on a familiar story. The defenders seem to defend it under the umbrella that it’s a remake (with an implication that those stereotypes are just tied to the movie), but as someone who has never seen the prior incarnations of this story, I don’t feel the need to extend that forgiveness to the movie, nor should a film ask the viewer to know the original material it’s remaking. To someone who does not extend that prior knowledge, the film feels like it has tired tropes: “boys will be boys”; “the female matriarch is there to understand and forgive her husband”; “gay men are support systems for their female friends and will upend their lives to support the women in their lives and live vicariously through their relationships and success.”

There’s even a theme that the male genius needs to be coddled and the women in their lives must endure their abuse, because that genius is a precious gift to the world. After movies like Mother! and Phantom Thread last year, I wonder if that’s really a theme we need to go back to.

Ultimately, A Star is Born isn’t a bad movie and it should be seen, with reservations, but is this movie and these themes really what we need right now? A film can still be good without being timely, and that shouldn’t be held against the movie, but there’s a difference between a film being recommended and a film receiving a plethora of Academy Award nominations (which I’m already braced for this movie receiving). And in terms of receiving the latter, that’s when a movie with more to say and more of a relevancy to today should be prioritized.

So days after seeing the film, I consulted with fellow critic Maddie Broph to hear her reaction to my review.

What follows is more of a conversation between us. Nothing we talk about isn’t revealed in the trailer.

Maddie, what was your reaction.

Overall, I liked more than you. I wanted to immediately watch it the next day. However, there is truth to what you say. Especially the transition after the first act. While the film does a great job taking its time in the first act, something goes haywire after that – the pace is insane, it’s hard to follow how much time has passed, namely that they’re trying to do too much too quickly.

So as I watched it, I focused very much on the abuse Jackson was dishing out and how she was taking it. He literally calls her ugly at one time and her reaction and then the scene where she forgives him feels muted. It feels like a reversal from what both the media and recent films say should be the bar for what women should endure.

But then as I read some reviews afterwards, I saw reviewers (mostly men) talk about the film being a character study on addiction. I thought it was interesting that your perspective in life probably dictates where your sympathies lie in that situation. But it is kind of interesting in our society that you have an abuser and a victim, but the abuser is also a victim. And how you divide your sympathies will probably help you decide how much you love the movie.

So, as a female, while watching a relationship that can be described as abusive, how do you split your sympathy for Jackson vs Ally?

That’s a hard one. I guess the movie could’ve taken a real turn if Jackson had been physically abusive to her (it never goes there). Now one could argue from what we saw he started becoming verbally abusive. But Gaga from the start made her position clear- she won’t support this kind of behavior. She doesn’t need him and can move along. I think this is unfortunately key. I wonder how much more manipulating Jackson could’ve been if Ally hadn’t been as independent.

Okay, so since I gave my full review, I’m going to defer the final word to Maddie and her overall thoughts on the movie:

This is a well made movie, even if the performances take center-stage over plot development. The first half is genius filmmaking. Gaga and Bradley’s performances feel lived in; you can connect with them both whether you dream of being on stage or not. With stellar directing choices the camera stays right with them during that journey. While I wish the rest of the film had been just as organized and memorable, it was a joy to just be a part of the theater audience and watch these two lovable, fragile, and kind-hearted characters fumble through fame and glory. If you’re not sure if you want to see this movie, I’d urge you to go! The music is authentic, the acting electrifyingly raw, and maybe most of all, the moments between leads Gaga and Cooper will stay with you long after the final sequence. And if you don’t want to go/are annoyed by the hype/don’t get why Cooper is leading a country rock band/etc. then maybe just give the album a listen. Perhaps Gaga’s voice is this movies’ brightest light.