1970’s Westerns Parody Dates In Ways Both Enjoyable And Not

Comedy is a funny thing.

And that’s not meant to be funny, by the way. Rather it’s intended as a half-heartedly “clever” attempt to express a more serious truth about its ephemeral nature.

If drama, as classically defined, is meant to “hold up a mirror to nature”, then comedy distorts through its funhouse reflection; and if that reflection is constantly changing, shifting prismatically through its malleable cultural contours, then the element of passing time can alter that already distorted view in its fourth-dimensional course.

Case in point. Earlier in the week this reviewer mounted a questionable defense on social media of the 1978 fraternity comedy Animal House. Starting “Not to make light,” — an unpromising conditional statement to the ill-conceived nature of the point to follow — a certain Supreme Court nominee “and his prep school pals” was invoked, qualifying the then youthfully toxic gang of upper-class twits’ confusion over “where they’d be pledging on [Faber College] campus”.

Persisting in my folly,

Uncomfortable crudities and latter-day cringe-iness [sic]) aside, those comedies were always about working class, proletariat-level revolution against the elite. The trust fund babies of the world need not apply.

We all have our lapses in judgment. (To the discussion group’s credit, the comment was mercifully met with polite silence.) So, to the question, “Is Animal House still funny?”, the best answer is “probably not”, but that doesn’t mean it still doesn’t have undeniably funny things among the less savory, uncomfortable, and indeed cringe-inducing ‘celebration’ of all things (binge blackouts, sexual deception, physical assault, among much else) fraternally poisonous. 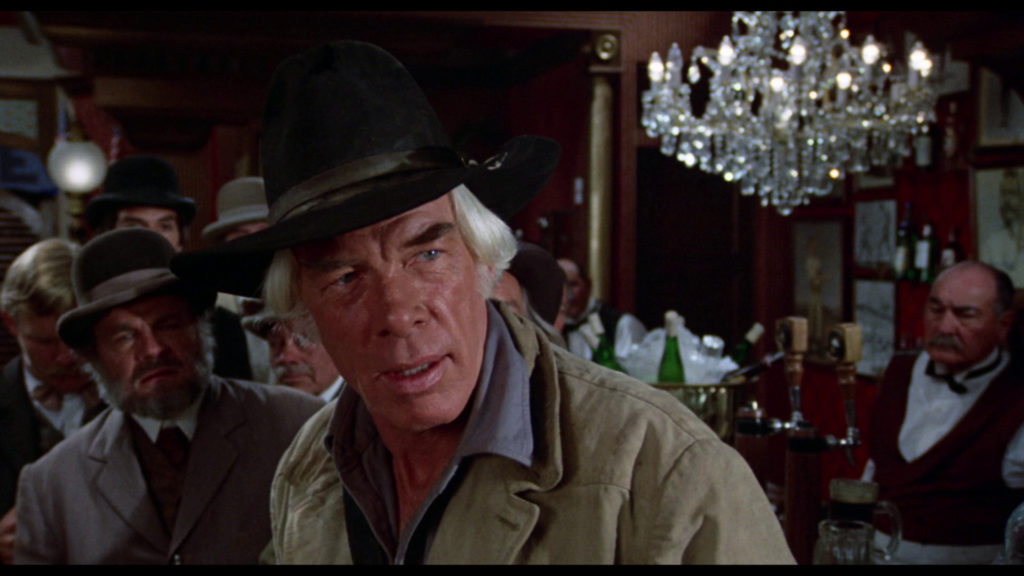 Which brings us to the not-quite-in-the-same-cow-tickling-league-as-Blazing Saddles (1973) Westerns parody, from American International Pictures in 1976, The Great Scout and Cathouse Thursday. Kino Lorber’s Blu-ray release, licensed from the flagging home video division of the near-moribund MGM – who incongruously preface this 42-year-old cross-genre oddity with a new logo featuring a giant, screen-filling close-up of Leo the Lion’s eye (at this point in the company’s history, the aged animal may need cataract surgery) – arrives at precisely the wrong moment in cultural history. 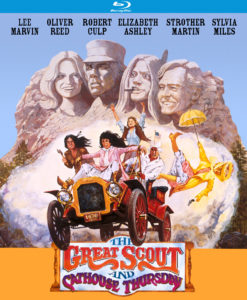 Requiring a more nuanced, sensitive handling of newly challenging issues related to history, gender, and race – not to mention violence and sexuality – its double scare-quoted “’bawdy’ and ‘hilarious’” comedy stylings certainly do not deliver much in the way of nuance or sensitivity.

But somehow the movie does not offend (over-)much in watching today and undoubtedly compensates with its more-than-modest entertainment value. With its rollicking cover image invoking Mt. Rushmore, turn-of-the-century nostalgia, and early automobiles – a last-gasp celebration of the pioneer west before it was permanently settled – Scout/Thursday is (mainly) enjoyable in spirit while also giving latter-day viewers several moments for pause (extending to the overused function on one’s media player) throughout.

It’s 1908, and the Old West is dead; except aging frontiersmen, gold-prospecting, trail-hands, jacks-of-all-western-trades trio Billy (Strother Martin), Joe Knox (Oliver Reed), and the once-celebrated, now-legendary “Great Scout” Sam Longwood (Lee Marvin) are still living. With mountainous, snow-covered Colorado in the picturesque background, “half-breed” Joe Knox, the progeny of an untoward liaison between a platoon of U.S. cavalry invaders and a Sioux squaw, and grizzly ol’ galoot Billy, who seems to have a perennially unlodged tick lying under the soiled shirt-front of his frequently scratched beer-belly, waylay and kidnap a seven-day wagon-load of western prostitutes, en-route to the brothel of Madame Mike (Sylvia Miles) to bolster the servicing ranks of an upcoming rally for presidential nominee William Howard Taft. Drunkenly vowing vengeance to the tarnished legacy to which he is living heir, Knox announces plans to ‘forcibly infect’ [single-quotations and phrasing are euphemistically my own] these working girls in a broader scheme to similarly ‘infect’ by diseased pox-proxy every white man in the west.

Fortunately (for both the west and the audience), the arrival of Sam Longwood to the trio’s backwoods cabin distracts Joe Knox from his fell (and possibly half-hearted) intent with news of the arrival of an old associate of theirs, Jack Colby (Robert Culp); who 15 years before stole away their stake in a gold mine operation along with Sam’s erstwhile romantic partner, Nancy Sue (Elizabeth Ashley).  Colby’s larcenous acquisitions transforming a former saddle bum and a foul-mouthed prostitute into the region’s first high society couple, complete with a newfangled motor-car and a private army of detectives, Jack is in fact bankrolling that very Taft rally when Sam and Joe crash the fancy fundraising party, demanding their fair $60,000 share of the millionaire miscreant’s ill-gotten fortune.

Just as the rest of her days-of-the-week cohorts have (story-conveniently) receded into the bawdy background of our western saga, the fourth member, 17-year-old Thursday (Kay Lenz), steps forward as a runaway from a prominent background, an obsessive object of employer Madame Mike’s reckless roadster pursuit, and as a willing ward to the reduced-in-greatness, fifty-year-old former Great Scout’s increasingly protective interest. And so begins the legend of The Great Scout and Cathouse Thursday, which confusingly but (again, mostly) entertainingly builds through cross-country pursuits, open-scenery shootouts, and hair-breadth escapes to the climactic Taft Rally political carnival where the chasing, fisticuffs, and shooting ends with most of its participants neck-high in a muddy ditch. 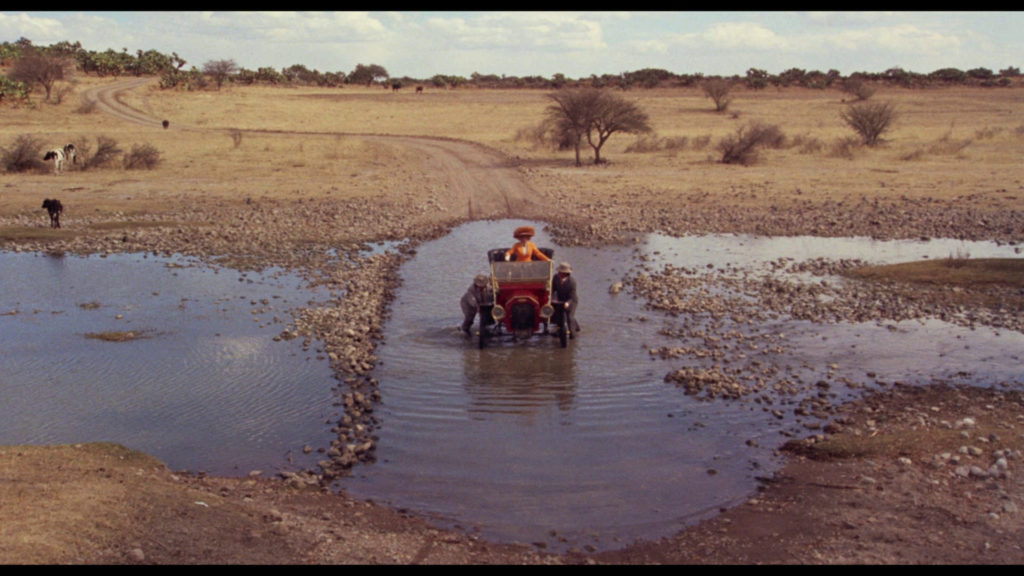 “Broad” doesn’t begin to describe the proceedings with justice, which must first be admired purely from the vantage point that at least this viewer’s attention never began to lag. Scout/Thursday‘s sustained tinny piano-tone, as provided by John Cameron’s cornily-comic and mock-nostalgic score, particularly resonated with this reviewer, whose earliest memories of pizza parlors, ice cream shoppes, and candy confectionaries were all similarly packaged with the era’s ‘fun’ brand of pin-stripes, red suspenders, derby hats, handlebar mustaches, peanut shells-on-the-floor, colored filters-on-kerosene lamps milieu.

Former actor Don Taylor, the youthful detective in the classically influential film noir The Naked City (1949) and co-star opposite Elizabeth Taylor of the original Father of the Bride (1950) and its sequel, Father’s Little Dividend (1951), transitioned to directing by the mid-1970s and here shows as much of a sure hand at staging peculiarly involving chaos as he would the very next year with AIP’s famous fiasco The Island of Dr. Moreau (1977); the startlingly sleazy remake of the 1896 H.G. Wells novel formerly filmed as the classic 1932 science-fiction thriller The Island of Lost Souls. And, among other screen assets, you simply can’t go wrong with raspy-voiced Strother Martin in a western, while Lee Marvin’s post-Bogart brand of weary but hardened screen masculinity, alongside brutishly British yet bizarrely convincing Oliver Reed (the latter essaying the vulnerability beneath his bluster even under layers of offending grease paint), individually ground their roundly extreme characterizations with kernel-cores of relatable humanity. The Wild Bunch (1969) they ain’t, but there’s something eccentrically touching in their performances and past-prime screen dynamic. 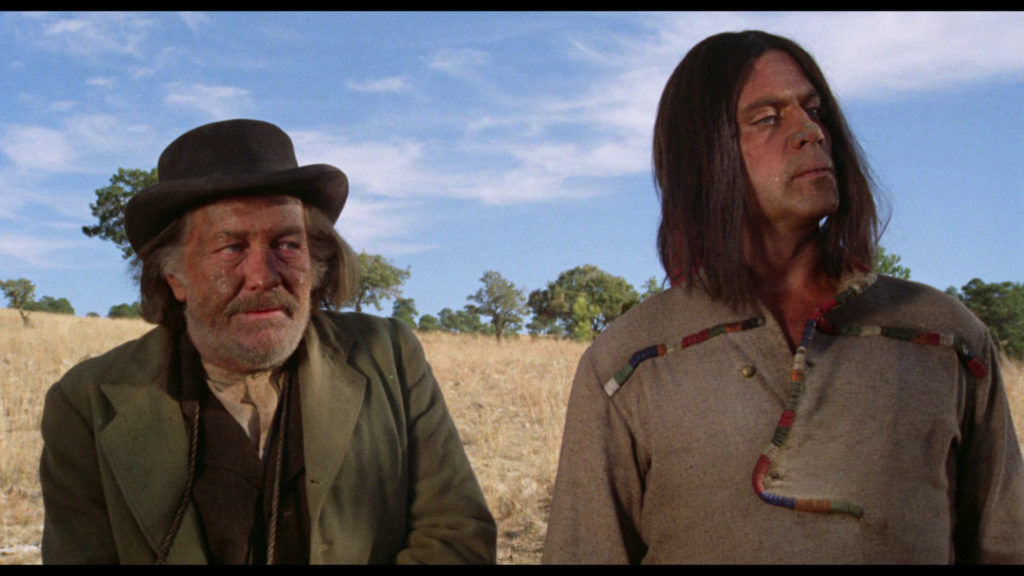 The glaring problem with Scout/Thursday is that we as a culture have moved on since 1976, and the production’s edgy R-rated appeal for contemporary audiences will be entirely lost for audiences of today sensitive to rape jokes (three, by my count), racial insensitivity (Reed, for all his skill, simply cannot overcome our reading of his character as a “drunken native” in redface), and age-inappropriate sexuality (to his credit, Marvin wakes with comic embarrassment – saying she “felt older” in the dark – after the title characters consummate their at-the-time-lawful passion, but still…). What was daringly ‘light and frothy’ for some audiences in the mid-70s has certainly become problematic in the intervening years. 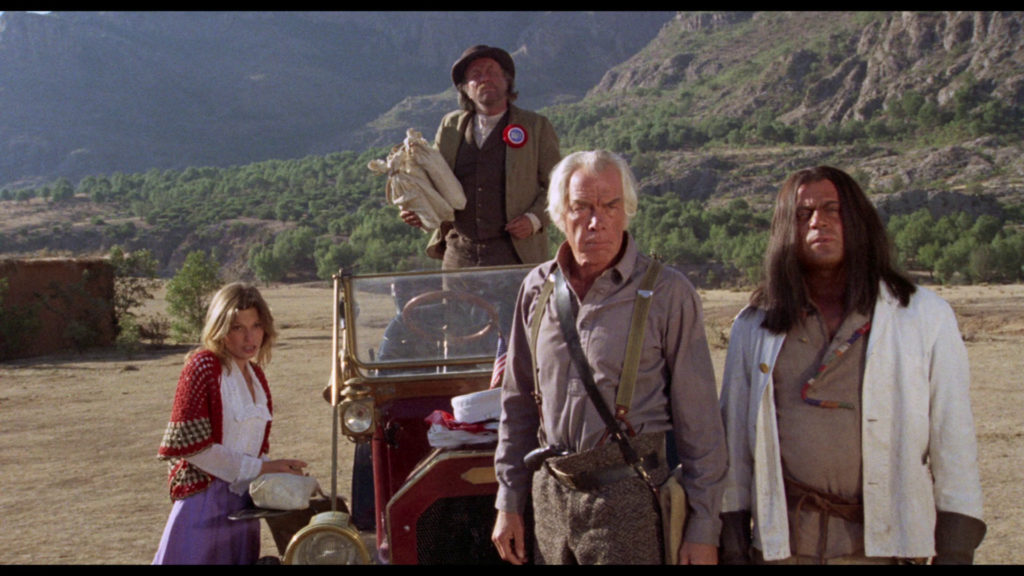 And perhaps it should have always been. So, again, as to the question of “can we still laugh at X”, applied to The Great Scout and Cathouse Thursday, Kino Lorber has done their usual due diligence in unearthing this relic that was probably better left buried, but which still may provide a couple hours of entertainment both questionable and not. For the latter, the transfer does look beautiful in high definition, the broad, deep color palette of your favorite chintzy cornball restaurant chain of the 1970’s coming to vivid life on glorious Blu-ray. For the former, though, the questions are certainly worth asking, along with our continuing (and increasingly problematic) relationships to cultural artifacts of the past. Scout/Thursday may belong firmly (and at times uncomfortably) to it, but that doesn’t necessarily mean we have to wholly sacrifice our (still reservedly vigilant) enjoyment of the past.