A Delightful Duo From A Dynamic Duo 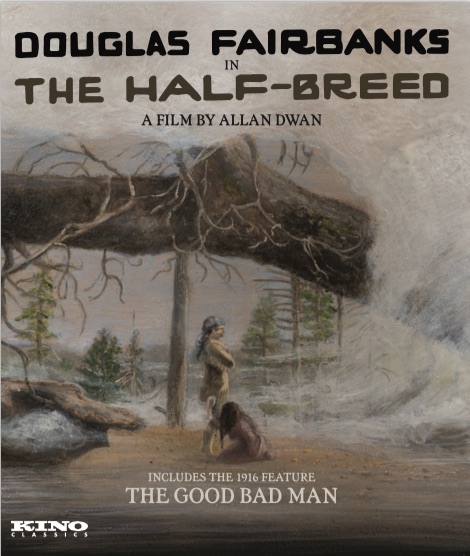 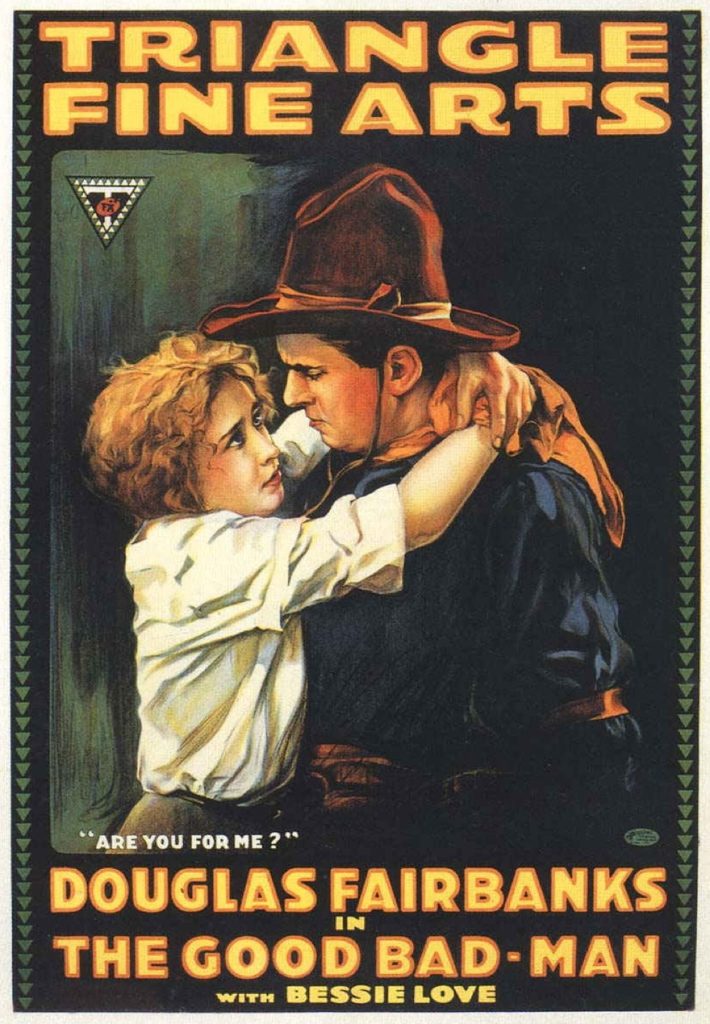 Last month I had the sterling opportunity to review two key films from the 1920s film partnership of star Gloria Swanson and director Allan Dwan. Turning back the clocks slightly to the decade before, Kino Classics shines a spotlight on an earlier performer along with our returning director — Dwan then at the outset of his 45-year career and 400+-filmography — in two westerns shot concurrently with D.W. Griffith’s Intolerance (1916). Under that film pioneer’s supervision and for the same Culver City studio, Triangle Fine Arts, 33-year-old Douglas Fairbanks, fulfilling his last contract before permanently embarking on his own career as a producer and star, blazes through natural historical settings under the guidance of another great screen realist in director Allan Dwan. Both photographed in pellucid visual tones by future director Victor Fleming, viewing The Half-Breed and The Good Bad Man on Blu-ray 102 years after both were released, re-cut, re-named, re-released, lost, re-found, and eventually restored, one has the feeling of witnessing the beginning not only of a great moviemaking team, but also of movies made in Hollywood.

My grandparents were born 100 miles from each other on the same day and year, in 1913, and so were among the first audiences for the earliest Hollywood movies. (Both largely losing interest in moviegoing as adults, my grandfather dismissed movies made after the advent of sound as “people standing around in luxury rooms and waiting to hear a pin drop.”)

An action man himself, Grandpa found inspiration in the early films of Douglas Fairbanks, which I’ll reproduce here from an earlier article: 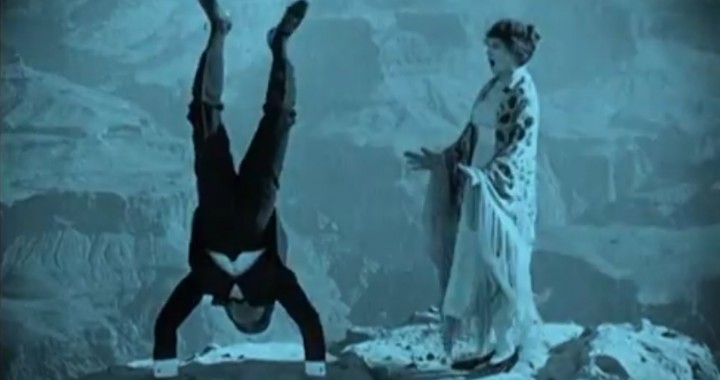 Denver to Flagstaff and Van Nuys to Green Bay, wherever Grandpa happened to be, the great Hollywood idols of yesteryear — Harold Lloyd, Buster Keaton, Mary Pickford, William S. Hart, Harry Langdon, Pearl White, Jack Holt, Billy Bevan, Larry Semon, Charley Chase, Fatty Arbuckle, Al St. John, Snub Pollard, Ruth Roland, Monty Banks, Raymond Griffith (and about a half dozen others he told me about, but I’d never heard of) — followed him from town to town, theater to theater, screen to screen, risking their necks in all manner of cockeyed, convoluted situation… And all for the entirely reasonable price of admission.

A dime, maybe. (Up from the nickel of a couple years previous.)

Douglas Fairbanks was Grandpa’s absolute hero of the silver screen, who you can see hand-standing over the Grand Canyon about [100] words previous.

That picture just about sums the guy up.

And it was, in fact, a particular Fairbanks extravaganza that set Grandpa on his path to athletic glory, awakening him to physical possibilities previously undreamed of:

4 or 5 years old at the time, he stood in the back of a hot smoky theater with his mother. A tinny, ragtime piano near the screen accompanied a blazing silver image of DOUG, ALL-AMERICAN BOY ‘making time’ with not one, but TWO(!) fair-haired lasses in summer dresses, swinging out on separate porch swings.

In the scene, when Doug would tire of one girl, he’d simply grab a vine hanging over-head, pull his weight up on one hand, twist his body ’round mid-air, and deposit himself in the swing right beside the other girl.

Without either gal being the wiser.

Boy, oh boy, was this for him!

There and then, Grandpa realized that anyone could quite naturally make up for even the most outrageous breach of social etiquette by simple virtue of performing on that level of miraculous physicality.

In the movies, Doug didn’t always behave in the most likable ways, but audiences always liked the guy ’cos of what he could do.

Before commencing with the films themselves, I first offer it as a challenge to anyone to identify the scene that so inspired my grandfather (‘cos I’ve never been able to find it myself) and second to impart some of the wonder that early film audiences felt for miracle-makers of the silver screen. Together, Douglas Fairbanks and directors like Allan Dwan were among those early practitioners of the emerging popular artform to make movies move. 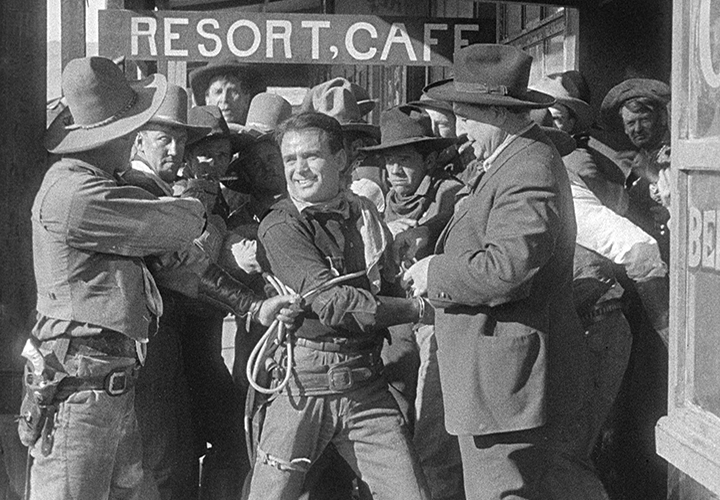 Released mid-way through his 18-month, 12-film contract with Triangle Pictures, Fairbanks is Passin’ Through; a roving western outlaw who sticks up stagecoaches and barrooms only to re-distribute the ill-gotten wealth to needy families. Besides thematically anticipating the future costume epic with which Fairbanks and Dwan would change Hollywood forever, 1922’s Robin Hood, The Good Bad Man recalls the persistent strain of tarnished virtue that makes the screen anti-hero so compelling. And with backlighting illuminating the fair-hued tendrils of 17-year-old co-star Bessie Love’s roughhewn coiffure, the same glint off Doug’s impossibly bright smile make even the most intimate scenes of this 6-reel western adventure crackle and pop with the athletic grace the star effortlessly projected. From the star’s own scenario, the uneasy (and unknown) father-son dynamic that propels both westerns Fairbanks and Dwan made in 1916 finds its lighter but by no means less tragic expression in The Good Bad Man; with the patrilineal obsession of our marauding miscreant, significantly unnamed, struggling to ‘do right’ while feeling the inner core of him is somehow ‘wrong’. Expertly essaying a literal embodiment of the latter, frequent (and favorite) Fairbanks/Dwan baddie Sam De Grasse, as The Wolf, offers true screen villainy to rival and counter-balance Passin’ Through’s nobler impulses toward his ignoble vocation (or lack of one) and his tender regard for Bessie Love’s not entirely too delicate waif Amy. A rough ‘n ready, ol’ fashioned rambler of a movie western, the vivid visuals and equally vivid storytelling combine to imbue the rocky cliffs and sunlit gorges with the inner struggles of those both pursued and pursuing. 50 adventure-packed minutes later, and as with any good western feature (this having extra significance as being one of the first), we as viewers are merely visitors to wildernesses both outside and in, but we can certainly relish the passin’ through. 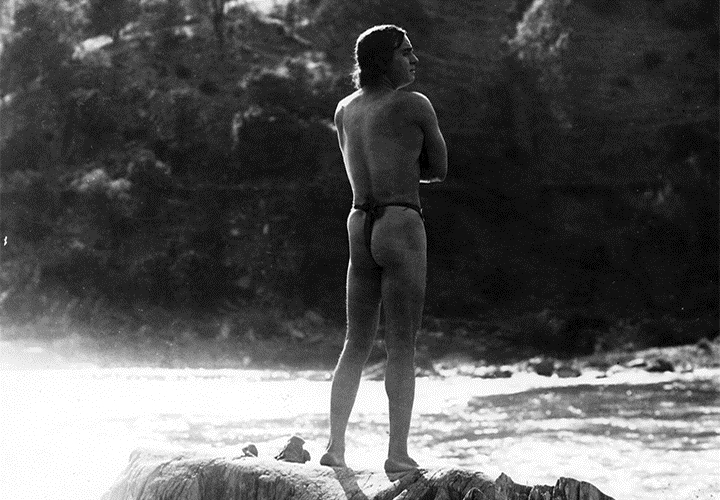 Released later that summer, the more serious and thematically troubling of Dwan and Fairbanks’ western duo finds the latter with fewer on-screen opportunities to flash his famous smile, but the darker elements that may have put off original audiences find additional (and fascinating) resonance 102 years later. Doug is Lo Dorman; a deerskin-clad outdoorsman, complete with coonskin cap, whose mixed-race heritage excludes him from a civilized settlement (humorously undercut in a series of intertitles that describe its substantial failings as “civilization”) and forces him to take permanent refuge in the hollow of a giant redwood. Famously introduced out of both his deer- and coonskin, the star’s substantial musculature exposed to the elements and nature (a shot that, surprisingly, was not cut from any existing prints of the film), the statue-like bearing Fairbanks as Lo Dorman affects throughout reflects the defiant attitude of his conflicted character — his very name apparently being a poor French translation of “sleeping water” (‘L’Eau Dormante’) — towards the nether-position existing between his European and Native American ancestry. The title may make one flinch today, but the western drama, while still offering plenty of the action-adventure thrills one might expect from the Dwan-Fairbanks pairing, pulls few punches when Lo’s dignity, bravery, and intrinsic sense of self-worth is held in the balance. 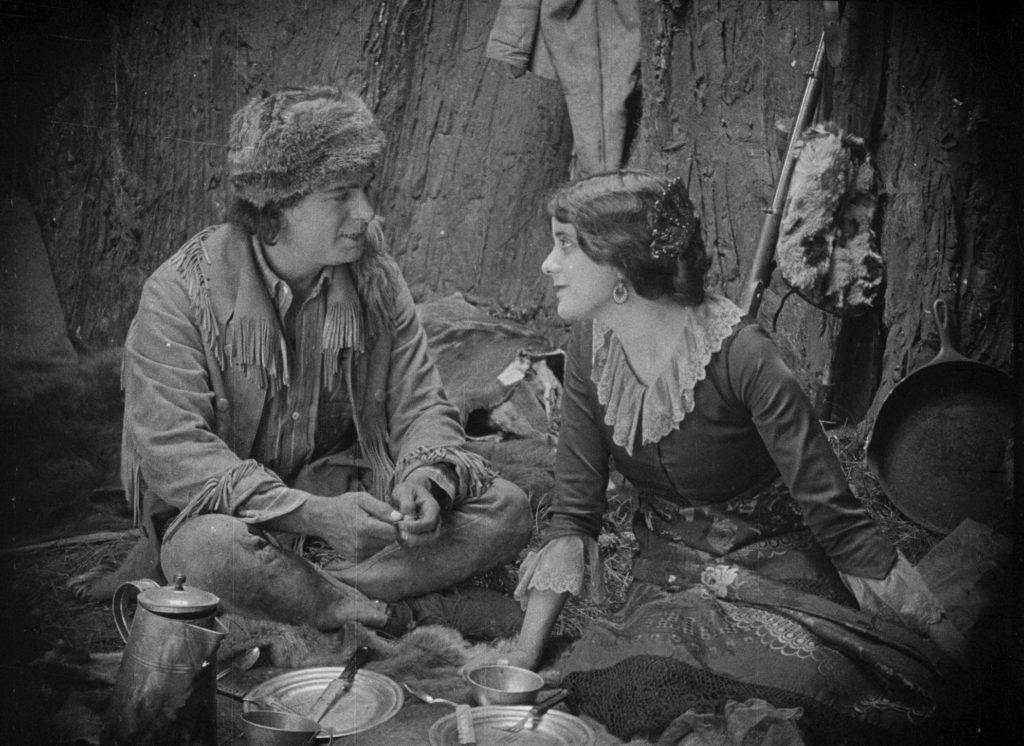 Based on the Bret Harte story “In the Carquinez Woods”, Doug’s Lo is similarly story-torn between romantic options offered in ‘pure’ towns-girl Nellie (Jewel Carmen) and ‘impure’ saloon-gal Teresa (Alma Rubens). Repeating the more personally-resonant story-element for the actor, villain-extraordinaire Sam De Grasse returns from The Good Bad Man as the hateful Sheriff Dunn; who is not only Lo’s romantic rival with the flighty and frivolous Nellie but, unbeknownst to both, is also Lo’s father. That melodramatic plot point, woven strongly but subtly throughout, slow-builds upon the naturalistic details favored by Dwan — barroom dances, street scenes, church services — to the exciting climactic conflagration that threatens Lo’s wilderness home. Tri-cornered and even quad-angled romance, sexual jealousy, indirect incest, racial prejudice, attempted murder; The Half-Breed is a heady brew of heterogeneous conflict that has lost little of its power to shock or challenge. Not only told on the larger scale that prefigures the actor and directors’ later adventure and costume epics, Douglas Fairbanks and Allan Dwan have clearly sharpened their thematic axe to great advantage when, at the film’s conclusion, the corpses lie, the embers clear, and a lone figure — trailed by a similar societal cast-off — embarks into the great unknown.

The backstory behind and complex state of preservation existing for both The Good Bad Man and The Half-Breed are nearly as compelling as the films themselves. While a complete print of a mid-20s re-issue of The Good Bad Man has existed in the Library of Congress archives, the film itself has been little seen; and while variant re-cuts and re-issues of The Half-Breed have been variously in circulation, it is only since a massive restoration, conducted by San Francisco’s Silent Film Festival, in 2013, that a more-or-less complete print of the latter film has been assembled from no less than three archival sources. (Those being an abridgment cut held in 16mm by Lobster Films, a 1924 re-issue 35mm print held by Cinematheque Francais — from which 90% of the original source material is derived — and, finally, and most romantically from a film preservation point of view, a few shots and scene fragments taken from a complete though almost entirely unusable 35mm nitrate print of the original 1916 release found 40 years ago in a frozen abandoned swimming pool in Dawson City, Yukon.) So, in short, I’m grateful that both films are available for home viewing and, indeed, that they even exist.

And if that were not reason enough, my personal feeling of gratitude extends to film preservationists Robert Byrne and Tracey Goessel, whose combined efforts made this home video presentation possible. Regarding the latter, the author of 2015’s acclaimed biography The First King of Hollywood: The Life of Douglas Fairbanks makes an expert case for the now sometimes overlooked star in two co-commentaries accompanying the Blu-ray. Along with a power-point demonstration given by the former of The Half-Breed restoration, recorded at the 2013 San Francisco Film Festival — where both restored prints were originally exhibited — Kino Classics’ special features include a gallery of rare stills, promotional posters, and advertising that will surprise and delight the most hardened of film fetishists.

Special mention must also be made to the piano accompaniment on both films from Donald Sosin. While it was easy enough 100 years ago for my grandparents to have seen these films for, again, the entirely reasonable price of admission, the mood, tone, and tenor of the times from which they came becomes increasingly difficult to capture, much less reproduce. Like these marvelous restorations whose efforts in effect recapture pieces of time, the impromptu musical stylings of, say, a plucked on-screen banjo — before a long-ago audience fascinated by a traveling medicine show — echoes across space, distance, and time in precisely the same manner. Film, music, and the life they reproduce eternally remain our contemporaries.

The images in this review are taken from various sources and are not meant to reflect the picture quality of the Blu-ray.