Who Was the Mastermind Behind This Decision? 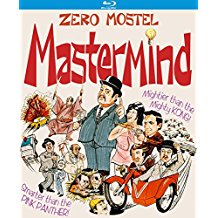 Mastermind is a comedy from 1976 in which Zero Mostel (The Producers, A Funny Thing Happened on the Way to the Forum) plays Inspector Hoku Ichihara, a Japanese detective who frequently imagines himself as a samurai.

I’m just going to leave that there to chew on for a bit.

Yeaaaah. That’s a thing that actually happened. And that’s obviously the massive elephant in the room for this particular blu-ray release. I’m not going to condemn a movie made over 40 years ago for not living up to standards that Hollywood still struggles with (looking at you, Ghost in the Shell), but you have to admit that the whole idea of it is… problematic these days, and that’s putting it way too mildly. The movie was made at a time when sensitivities to depictions of race and culture were only beginning to go mainstream- compare the way Native Americans are seen in movies like The Outlaw Josey Wales or Little Big Man to the way they were depicted in any western from the 40’s or 50’s. 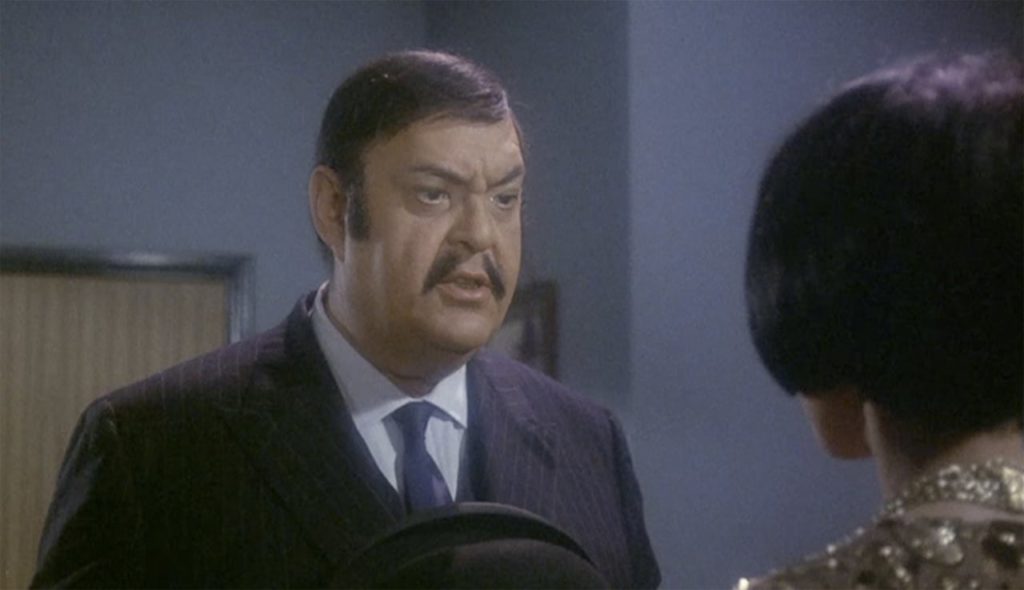 But obviously Hollywood, and American culture for that matter, still had a long way to go. All the same, it’s not fair to expect anything from that era to hold up to the gains made in minority representation over the intervening decades. Mastermind is a product of its time and should definitely be viewed from that perspective.

We get why this sort of thing just isn’t funny anymore, so why dredge something like this back up?

And having said that, I think the real question is why did Kino Lorber think this movie rated a blu-ray re-release in 2018? We get why this sort of thing just isn’t funny anymore, so why dredge something like this back up? I’m not arguing that all copies of this film should be hunted down and destroyed like The Star Wars Holiday Special, but does anything about this movie rate active preservation? Even back in the day it seemed no one wanted this. Mastermind was actually shot in 1969, and sat on a shelf for seven years before receiving  a limited theatrical run in 1976.

(Sidenote: Learning that answered a whole lotta questions I had about why this film looked much older than its official release date implied. Set and costume designs screamed late 1960’s to me). 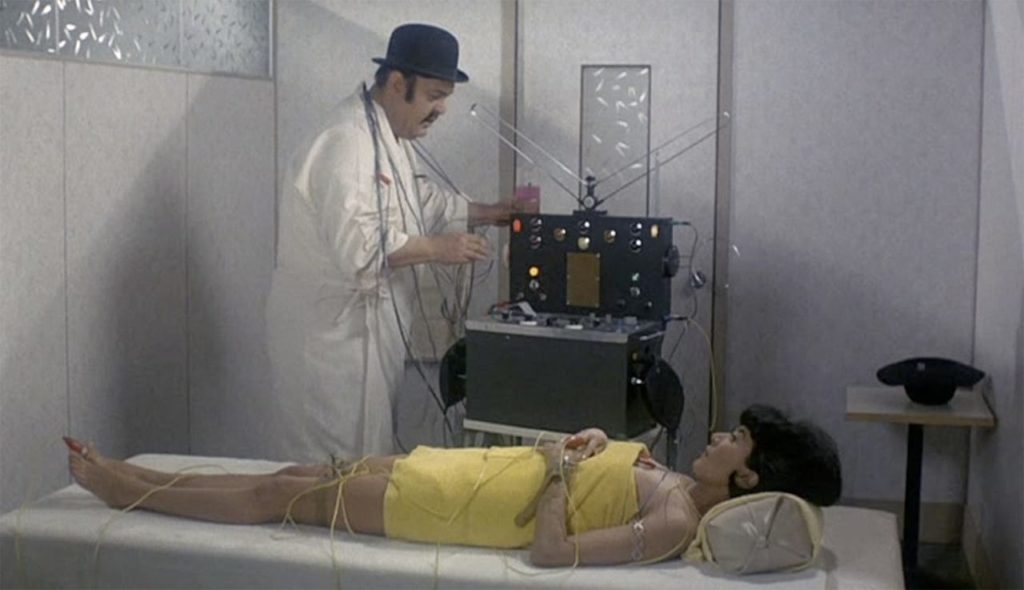 Movies like Gone With The Wind have elements in them that aren’t just troubling, they’re downright detestable because of the way they depict race or gender roles or the way they gloss over the ugliest parts of American history (or in the case of GWTW, all three). But for all that is wrong with the movie, Gone With the Wind is a classic. So is Breakfast at Tiffany’s, so is DePalma’s Scarface, so is Indiana Jones and the Temple of Doom. Each of these films have issues with the way they treat foreign cultures and non-whites, but their overall quality in craft, and their influence on filmmaking as an artform and on popular culture are such that they can’t just be discarded. We shouldn’t ignore their problems, but we can’t let the overall work be condemned because of them.

It’s just another tired retread of the detective spoof that was better done earlier by films like A Shot in the Dark.

And Mastermind just doesn’t stand with any of those films. It has a few funny moments, but overall it’s just another tired retread of the detective spoof that was better done earlier by films like A Shot in the Dark.

(Sidenote 2: Mastermind, like the aforementioned Shot in the Dark were both written by The Exorcist scribe, William Peter Blatty. Blatty was apparently so angry at the revisions made to his original script for Mastermind that he changed his writing credit to the pseudonym Terence Clyne. Pretty sure he never regretted doing that.)

The plot concerns the theft of an experimental robot doll from a toy factory in Kyoto. Someone sneaks into the factory and kills all of the guards with a fast-acting nerve toxin. Mostel’s Ichihara is brought on to solve the case. Ichihara is a brilliant detective with one very large blind spot: local nightclub owner Nikki Kono (Keiko Kishi). He has a massive unrequited crush on her and  he can’t fathom that she could be in anyway involved with the crime, even when all signs point her way. 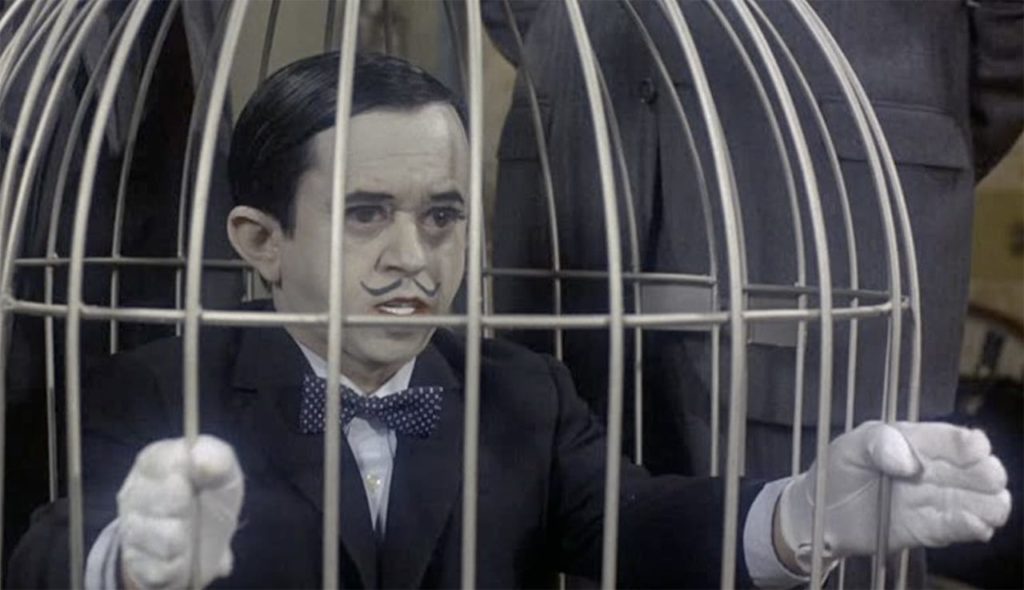 His primary suspect is Max Engstrom (Sorrell Booke, best known as Boss Hogg from The Dukes of Hazzard).  An American secret service agent (Bradford Dillman) shows up at one point with his own agenda, and so do two Israeli agents (Jules Munshin and Phil Leeds). And it just never makes any kind of sense but the ins and outs of the plots aren’t that important. They just serve as a loose framework to hang the movies jokes onto.

Zero Mostel is an extremely funny performer, but this is nowhere near his best work. Even still, he manages to put forward plentiful heart and pathos through all the layers of the (bad) makeup he’s forced to wear. Mostel’s most expressive features are his bulging eyes, and here they spend the movie buried under latex.

So again the question is who was demanding this film be released to blu-ray in this day and age. The movie isn’t that great, and fans of Zero Mostel are better served elsewhere, unless they’re die-hard completists. Unfortunately, the disc is pretty bare-bones when it comes to special features. The only thing that comes with the movie is a collection of trailers. If any one of Kino-Lorber’s discs needed a film historian to comment on the why of its existence, it’d be Mastermind.