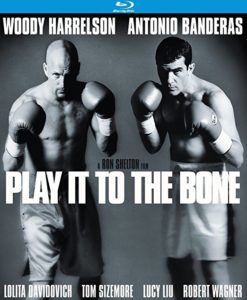 Directionless yet decidedly a director’s film, Ron Shelton’s 1999 tragi-comedy lite Play it to the Bone meanders throughout when all the while it should stride.

While never not enjoyable on some level, this lighthearted would-be boxing flick instead emerges as the uneasiest of buddy road trips.  Woody Harrelson and Antonio Banderas are professional boxing buddies Vince and Cesar, a couple of fighters whose primary commonality is hard luck in the ring.  A close second would be Grace, a spitfire entrepreneur played by Lolita Davidovich (discovered by Shelton a decade earlier for his historic yarn, Blaze; he then married her in ‘97).  Grace used to date Vince before pivoting to Cesar, but is now dumping him.  Right away, this is one awkward car ride.

Based upon this relationship history, one might correctly deduce that it’s Grace who’s driving the car.  The car is a stylishly vintage green convertible with the top down.  This is her turf, including the hearts of these men.  Vince and Cesar are given a sudden, unexpected shot at middleweight glory when the two previous fighters that were booked for a major pay-per-view boxing event become abruptly unavailable.  (One has overdosed, the other’s dead).

From the start, it’s obvious to everyone but them that the pack of greasy Vegas promoters (led by Robert Wagner and Tome Sizemore) that have lured them in on such short notice are nothing but opportunistic scoundrels.  Even the sharper Grace keeps her mouth shut about the likelihood of the guys the actually scoring the full $50,000 they’ve each been promised.  She understands that Vince and Cesar need this, and spends the film building each one up with her own uniquely and carefully crafted motivations. 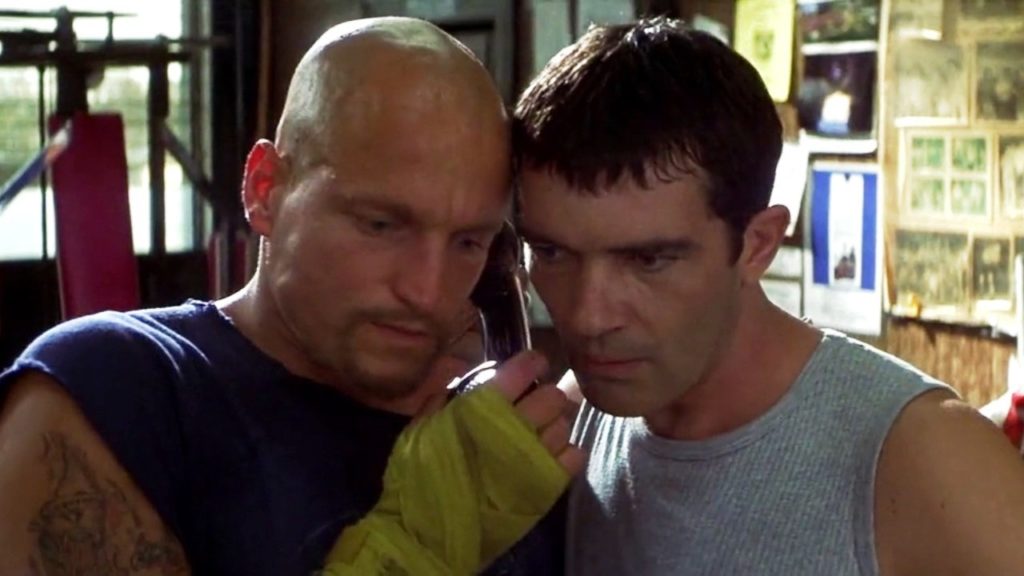 (l-r) Woody Harrelson and Antonio Banderas in PLAY IT TO THE BONE.

Grace’s machinations are purely benevolent, completely free of pitting the friends against one another before the inevitability of punching each other stupid in the ring.  Which very much does come to pass.   Beyond being the story of two Rockys who were forgotten goombas yesterday but are contenders today, Play it to the Bone has a soft underbelly of broader tragedy; casting relatable faces to those so desperate, that being harshly exploited – pummeled by one another in the interest of filling time before a big Mike Tyson match – is their most viable immediate turn.

But, this is a comedy.  At least, that’s the front it puts on.  Or at the very very least, according to director Shelton’s audio commentary track, the studio insisted on marketing Play it to the Bone as a comedy.  (He thinks of it as his “Vegas love story”).  This is ultimately a longwinded character study that can’t get the mileage it needs from the notions of one boxer who might be a Christian (Vince) and another who might be gay (Cesar).  Both swear up a storm and cavort freely with women, providing a modicum of dogmatic guilt for Vince.  Shelton, again per his audio commentary, claims it’s all commonly accurate to fighters.  His obvious devotion to professional boxing leads one to give him the benefit of the doubt.  That being the case, the issue becomes one of him as a screenwriter being too fascinated with his material, and being unable to leave anything on the table. 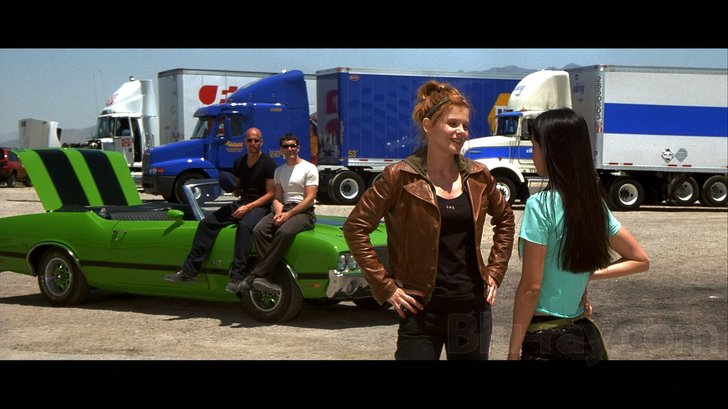 Davidovich gives Lucy Liu a piece of her mind in PLAY IT TO THE BONE.

In such, the film sprawls to over two hours in length, never more than flatlining its way across the desert as the central cast drive to Las Vegas for their unexpected shot at glory/redemption/fame and fortune.  A love story that puts real passion on hold, a comedy with tepid laughs, a boxing movie that withholds, then gorges itself on boxing… Play it to the Bone is rarely enough of any one thing.  At times, it’s a long haul.  At other times, it’s not so bad.

Along the way, they pick up Lucy Liu, playing a irritating over-sexed tart.  Liu sticks around long enough to piss off Grace and get it on with Vince in a pile of tires behind a gas station.  Later, she resurfaces at the Vegas fight, accompanied by Rod Stewart- one of many celebrity cameos (among them, Kevin Costner and Drew Carey) meant to flesh out the magnitude of the main event.  Why Liu’s character needs to be a part of the story at all, however, is never realized. 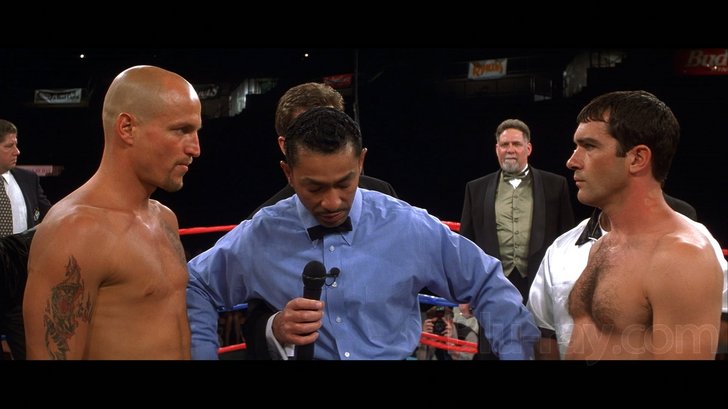 This movie isn’t awful, but the world hasn’t exactly been clamoring for it to get yet another release on disc, even if this one is high definition.  The high definition does look pretty good, though.  By 1999, the DVD age was up and running, so a nice appearance on disc is more commonplace for films of this era.  That said, a fine transfer is always something to trumpet.  It’s just too bad that the other Shelton title that Kino Lorber Studio Classics has put the same day, Blaze, doesn’t look this nice, it being the better movie.

In Ron Shelton’s utilitarian cinema of also-rans, Play it to the Bone is decidedly middleweight.  The actors play it quite convincingly, even as the bone they’re working towards is adorned with too much polished grizzle.