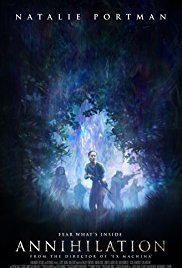 Lena (Natalie Portman) met her husband Kane (Oscar Isaac) when they were soldiers in the Army. Now a biologist, Lena hasn’t seen her husband in a year. He’s been away on a top secret mission and she fears him dead. Imagine her surprise when he shows up in their house, coughing up blood and not quite himself at all.

Annihilation is an ambitious, psychedelic wonder.

Their journey to the emergency room is interrupted by government officials who abduct them from their ambulance and take them to a compound. As Kane is hooked up to the appropriate medical machines to keep him alive, Lena demands to know what the heck is going on. 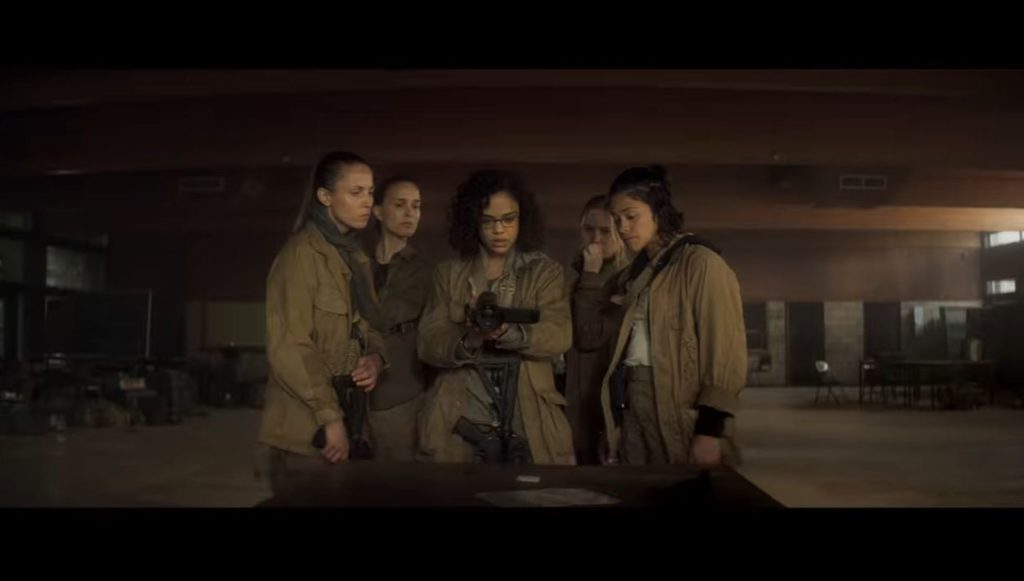 Dr. Ventress (Jennifer Jason Leigh) introduces herself as a psychologist and tells Lena a story. An asteroid strikes a lighthouse. A mass of incandescent light appears around the area, a sort of ground-level aurora borealis. The phenomenon expands, encroaching on territory slowly but surely, swallowing everything in its shimmer. Expeditions are launched, sending teams of military and scientific personnel into Area X, or “the Shimmer,” as its been dubbed by the government officials investigating, but not a single person returns. Until Kane came back.

Dr. Ventress is in charge of choosing the team members that travel into Area X. The next team is comprised of anthropologist Cass (Tuva Novotny), physicist Josie (Tessa Thompson), paramedic Anya (Gina Rodriguez) and Ventress herself. Lena, desperate to gain knowledge that could save her husband, volunteers to go with them into the Shimmer, explaining that her biology expertise and Army background will be an asset to the team’s mission.

Seeing five women go into the jungle with guns to confront an alien threat a la Arnold’s howling commandos in Predator is unprecedented. I haven’t seen a strong team of women like this on screen since Zack Snyder’s Sucker Punch. Like that film, Annihilation is an ambitious, psychedelic wonder. But if Sucker Punch is about self-preservation, Annihilation is about self-destruction. Echoes of Arrival and 2001: A Space Odyssey permeate the film, but it is its own (mutated) animal, exploring themes of fate, will, and human insignificance.

Be advised there are many disturbing sequences, including a scene involving a mutated bear that is as frightening as anything I’ve seen in any horror film. Couple that with the surreal ending and I’m glad I didn’t watch this while under the influence of mind-altering substances. That would have been a bad trip, indeed.

Internationally, Annihilation is being released straight to Netflix after producers watched the film and worried audiences wouldn’t be game for a film so complex. I’m happy it’s receiving a theatrical release in America and I implore you to see this film on the biggest screen possible. Make sure you ask the theater to turn up the sound as loud as they can, as the sound design is second to none, and the score by Ben Salisbury (Ex Machina) and Geoff Barrow (Portishead) is dissonance personified.

Natalie Portman brings Lena’s insecurities, passions, and prowess to life effortlessly, creating a much more interesting and multi-layered character than expected. Written and directed by Alex Garland (The Beach, 28 Days Later, Sunshine, Dredd, Ex Machina) and based on the first book in Jeff VanderMeer’s Southern Reach trilogy, Annihilation is destined to become a science fiction touchstone. It’s time we all got lost in the Shimmer.