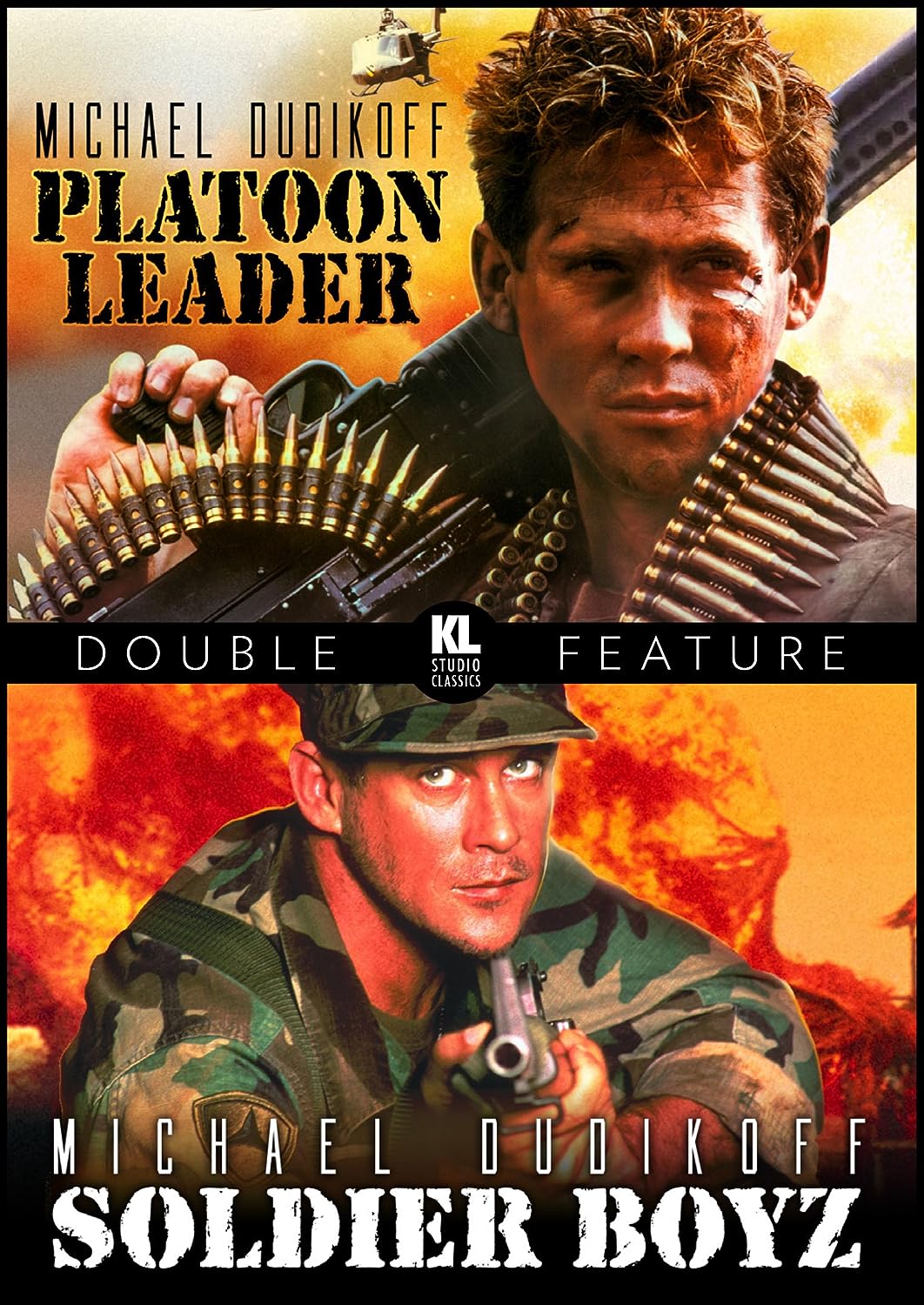 I’ve not yet seen American Ninja, a martial arts action film from 1985 that the Cannon Film Group hoped would make its star, Michael Dudikoff, into a household name. Alas, Dudikoff’s star never rose the way Chuck Norris’s did. How irrelevant do you have to be to not have been cast in any of the Expendables movies? On the other hand, he’s worked reliably up through the present day- mostly in direct-to-video fare, but he’s earned a devoted fan base. He even had a small part in TRON fer goodness sake as an unnamed conscript! Kino Lorber has released two of Dudikoff’s action films, each centered on America’s involvement in Vietnam, as a double-feature blu-ray: Platoon Leader from 1988, and Soldier Boyz from 1995.

So remember that wave of films about Vietnam during the mid to late 80’s? They pretty much came in two types: those like Platoon or Full Metal Jacket, and those like Rambo: First Blood Part II and Missing In Action. The former purported to depict the war as it really was, warts and all, and to ask whether or not our involvement there was worth the price. The latter wanted to refight the war and, this time, let America triumph. Platoon Leader starts out letting you think it’s going to be the first type of Vietnam movie, when at its heart it wants to be the second.

Dudikoff plays Lt. Jeff Knight, an officer fresh out of West Point with his head all full of fancy book learnin’. Now, Jeff Knight is good-looking, brave, intelligent, honorable and overall the best human being one could imagine. Unfortunately, he lacks crucial field experience. This means that once he’s out in the bush with his battle-hardened platoon, he turns into a chowderhead. Luckily, he steps on a landmine shortly after his tour begins, saving both his men and us from any more of his boneheaded commands. 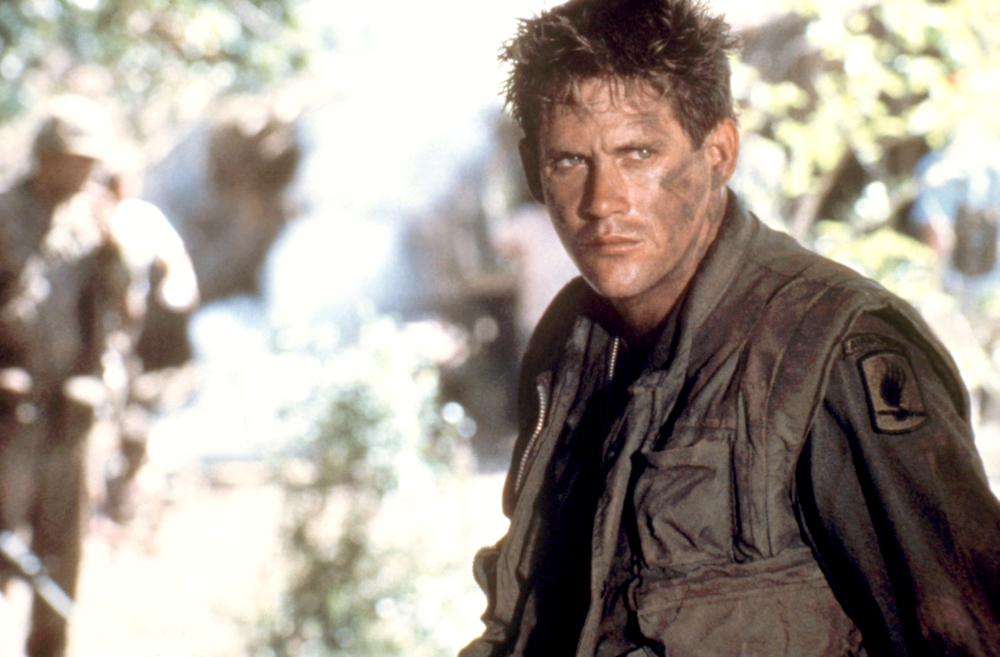 But no, our story is not yet over. It turns out that getting blown up was the best thing that could’ve happened to our hero, because once he’s out of the hospital and back in action, he is transmogrified into a better leader of men. He bonds with the gruff Sergeant McNamara and complains that his superiors don’t have the right idea about what the war is like from a ‘boots on the ground’ perspective. Why, his platoon could take on a whole army of Vietcong if only the government would give them everything they ask for in terms of equipment and manpower.

And here’s where Platoon Leader betrays its sympathies. It’s not interested in examining the moral nature of the war- whether or not America was right to intervene in the Vietnam conflict (spoiler: we weren’t). Platoon Leader just wants to set up the VC army as the bad guys, and our American heroes have a moral imperative to blow them up. Vietnam, as depicted in this movie, was a righteous cause in which only the VC committed war atrocities, and America only lost because our government lack the will to commit to total victory.

It turns out that getting blown up was the best thing that could’ve happened to our hero.

Soldier Boyz is the lesser of the two movies on our double feature, and given that Platoon Leader is the other movie, that’s saying something. In Soldier Boyz, Dudikoff plays Howard Tolliver, a former army Major, who now is in charge of a prison housing violent gang members. Tolliver is approached by a billionaire to rescue the billionaire’s daughter. She was doing NGO work in Vietnam and got herself captured by what appears to be an ethnically diverse group of bandits.

Luckily, Tolliver has his own little ethnically diverse band as well, comprised of killers he recruits from the prison population. Somehow it never occurs to anybody that the notion of arming a squad of unrepentant gang-bangers with military grade hardware and flying them halfway around the world is a terrible idea. Tolliver has the plot needs on his side, however, and so he is able to forge these undisciplined youths (including a young woman- are maximum level penitentiaries coed?) into a fighting unit. Soon they are ready to take on the bandits.

Soldier Boyz is the Vietnam War by way of Boyz in the Hood– only its not nearly as good as that description suggests. It’s rife with every imaginable 90’s action movie cliche. The heroes are incapable of missing any shot, no matter that they’re firing their assault rifles one-handed and seem to be only half paying attention where they’re pointing the things. The bad guys have all attended the Imperial Stormtrooper Marksmanship Academy. Pistols are meant to be held sideways while shooting- preferably while leaping sideways through the air. When the billionaire’s daughter tells the lead villain (The Man in the High Castle’s Cary-Hiroyuki Tagawa) that a rescue attempt is inevitable, he responds with a sneering “I’m counting on it!” although the Americans don’t seem to figure into his plans whatsoever. The only interesting thing of note about this whole endeavor is that Darren Aronofsky (Mother!, Black Swan, Noah) was a second-unit director on it.

Kino Lorber has released this on Blu-Ray with both films in a 1.85:1 aspect ratio and a 1920x1080P resolution. Picture and sound quality are good- at least as good as they probably ever were. The blu-ray also features theatrical trailers.