One of the Most Insane Theater Experiences

mother! is a film that is interesting for the reason that my emotions and responses to it completely ran the gamut from scene to scene. One moment I felt it was an irresponsible and a masturbatorial experience from director Darren Aronofsky, and the next thought it was a brilliant representation of what cinema should be. The reviews have been very divided on mother!, but I’ll do you one better and give a review that is very divided in itself. 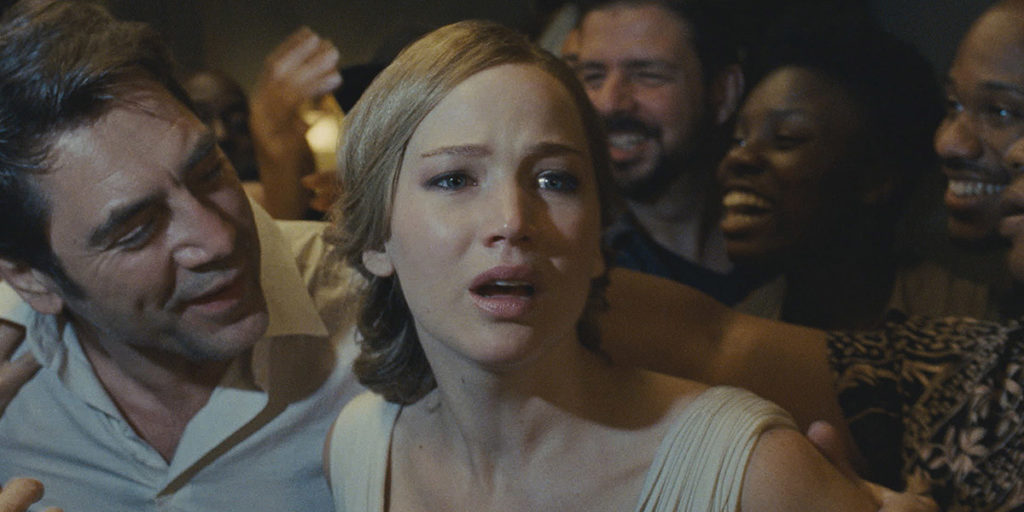 The characters don’t have names in the film, like most avant-garde college thesis films. She (Jennifer Lawrence) and He (Javier Bardem) are a married couple living in the middle of nowhere in a beautiful Victorian home. He is a poet and writer out of ideas. She is essentially a housewife there to fancy-up this beautiful home for her husband she adores.

It is revealed from the beginning that He doesn’t love her too much, as he seems to just view her as a surrogate to be his wife and future child’s mother. He also doesn’t seem to be too concerned for her concerns when a stranger played by Ed Harris shows up and she immediately objects to him staying, with her eyes first and eventually her words. 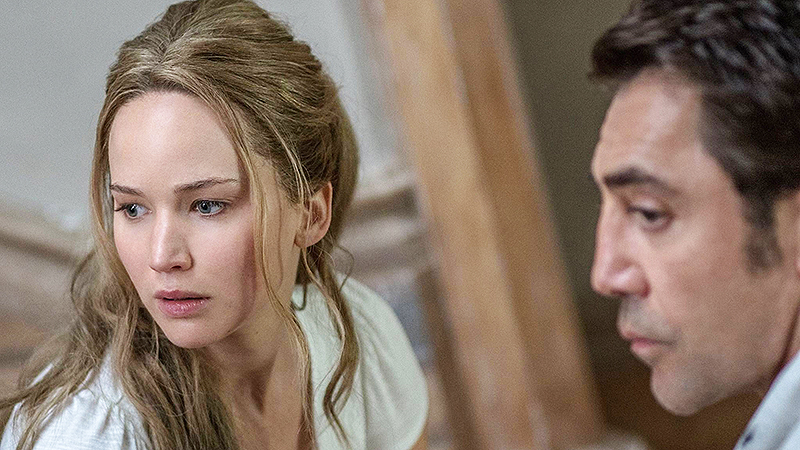 She and He’s relationship is pretty annoying for the first hour. Lawrence’s performance, though not bad and probably just how she was directed, is a series of shots of her looking appalled and flabbergasted at what her husband keeps saying and doing. Bardem has a cloying way of dismissing her by constantly speaking for her and manipulating her by being surprised at how much things upset her.

Aronofsky seems to be making an allegory, which I heard him confirm afterwards in an interview. He stated he wants the movie to be a snapshot for what America is like today, essentially implying that mother! is a Trump-reaction film. And for that, it’s understandable where it’s coming from. But this is also an argument as to why there needs to be more female directors, because allowing Aronofsky to be the voice of the plight of modern-day women seems troubling at best. mother! really toed the line on being a commentary on sexism or just straight sexist the whole time. Does Aronofsky see women today as allowing a Trump to happen because they are too relegated to taking care of their home, doing laundry and too in love with their husbands to say what needs to be said to stop them? Because that seems to be what Aronofsky is saying. Are older generations of women, played by Michelle Pheiffer, as much the problem because they brazenly scold the younger generation to be more life women? Another point seemed to be made.

If Aronofsky wants to make the point that the Trump-era is terrible, it’s fine. But we just had an election where 3 million more Americans voted against him. And the response since has been far from complacence. And some more fight from Lawrence and way less complacency probably could have driven that point home some more.

But when mother! gets brilliant, it hits some amazing heights.

The last 20 minutes is an experience you are not likely to have in a theater again for a long time, especially with such actors and production designs driving it home. To say the third act is bonkers would be an absolute understatement. The ending feels like some of the other themes he intended to explore, from a biblical allegory to the process of childbirth. Aronofsky really hits on the power of what cinema can be by letting go of the deeper meanings of simple character interactions and just going all out insane.

Ultimately, mother! is an experience that is too rich and unique to pass up. Just be prepared for some images you are not used to seeing in a film with A-list actors. And be prepared to possibly having a very emotional response of love or hatred to the film, or in my case, a little of both.