VISIT TO A SMALL PLANET

Kino Lorber’s release of two Jerry Lewis films in September (9/12 and 9/19) has a poignant, if inadvertent, timeliness, as these announcements came well before the man’s recent death at the age of 91. That the movies represent two distinct, somewhat bookending eras of the actor’s life makes the combination doubly valuable for fans like me – it’s another great reason to think about the long and varied career of one of the greatest screen comedians. When a figure with such a long history in the public eye dies, it’s as if their entire career cinches up in a second. There’s a hard dot on the farthest-right end of the timeline, as it were, and you can suddenly look back with a sense of complete perspective on their work. 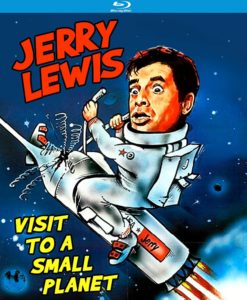 With Visit to a Small Planet, we can see Lewis at that point just before he launched into his “directed by” phase, at the outer edge of his post-Dean Martin/pre-auteur stage. After this movie, he’d begin what may be his most fertile period of creative success, directing projects for himself that showcased a wiser Jerry (not the skinny nightclub freak anymore), a more sentimental Jerry (witness the interludes of borderline existentialism in The Bellboy [1960] and The Errand Boy [1961]), and a codified and formidable talent in all respects (there’s no denying the genius of The Nutty Professor [1963]).

Yet neither before nor after this period was he immune to the off-beat goose egg. It’s tantalizing to watch the Lewis vehicle Visit to a Small Planet through the prism of the genesis of its existence: “based on a play by Gore Vidal.” It’s an amazing juxtaposition, bordering on oxymoron, nearly an exemplar of the sacred and the profane. But that way lies disappointment, for Gore Vidal this is not. The original, rather successful 1957 Broadway play (itself based on Vidal’s teleplay for the Goodyear Television Playhouse on NBC the year before) was a verbose and satirical broad-stroke by Vidal aimed at tarring the mid-’50s, post-war mentality with paranoid feathers, calling out not only the milquetoast family structure presented on television at the time, but the viciousness of human paranoia, specifically the allowance of perpetual war in the name of ridding the world of communism. Heady stuff, and all of it gets defanged, glossed over, and juvenile-ized by Paramount, director Norman Taurog, and Lewis, all of whom take Vidal’s original subtitle, “A Comedy Akin to Vaudeville” and make that the movie. 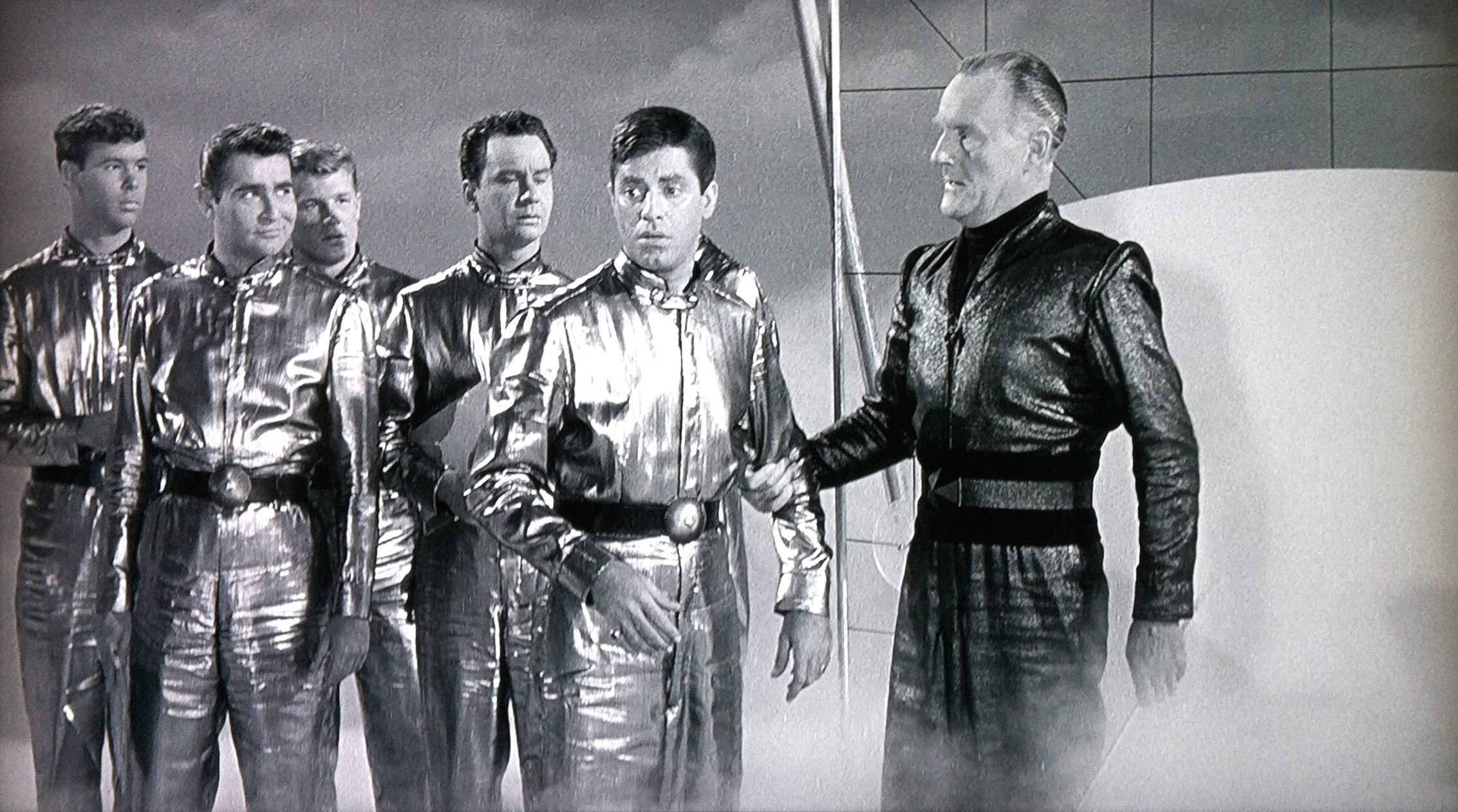 The original premise and characters stand. Lewis is Kreton (luckily not pronounced like cretin), a man from another planet – or, as is typical, a man-child – who heads for Earth to join in on the rousing fun! of the American Civil War, even donning a Confederate uniform for added immersion, but lands a hundred years too late, so instead strolls through observing society at the end of the 1950s. It’s the perfect comedy update for a de Tocqueville-like, from-the-hip study of who we are as a culture. Unfortunately, any and all questions that might provoke a Vidalian poke are here used instead to let Jerry perfect his shtick. This isn’t an entirely bad thing – if you’re a fan of that shtick, as I am. But the trade-off is a slate of keen set-ups, social mores wise, that get un-Gored with a quick double-take or goofy face. Recognition sacrificed for a chuckle.

One carryover from the play is the frank sex talk. For a studio film in 1960, especially one clearly aimed at a younger audience, it’s surprising to hear Kreton go on at length, and in several scenes, about how much he wants to watch young Ellen (Joan Blackman) and her boyfriend Conrad (Earl Holliman) “pitch woo” – where he’s from, there is no sex because “there’s enough of us.” Later, Ellen takes Kreton to “park” and proceeds to molest him towardly. Lewis gets to play boy-like innocence and the movie gets to get ribald. But again, it’s all for laughs, and any comments on sexual politics, with the turn of the ’60s ripe for commenting upon, along with everything else brought up, are all done in for a gag line or pratfall. It’s truly as if the outer space angle could be ditched for a guy from Canada.

In one sense, this is another movie that’s like so many of Lewis’s that pit his flailing boy-man against any number of stalwart, brooding, or otherwise overbearing authority figures. Young Lewis was best when he was throwing his immaturity against the wall of finger-wagging rule mongerers. The first was, of course, Dean, who was not so much an authority figure as a longsuffering older brother/babysitter who nevertheless clearly loved his wacky charge. But in his solo phase, Lewis needed guys like Visit‘s John Williams, who plays his teacher, Delton, back on Venus, a rigid, blustering British man (we remember him mostly as the chief inspector in Hitchcock’s Dial M For Murder) who is nothing short of the father character from any of your various teen rebellion movies, warning young Kreton of the consequences for stealing a spaceship for wanton joyrides, for hanging out with questionable girls, and for meddling in your neighbor’s business. It’s telling that Kreton disobeys this one “father” by using his special Venusian powers to control the behavior of his new lady friend’s father, torturing him with forced leg lifts, forced baby talk, and, of course, by gleefully destroying his life’s work debunking UFO stories. 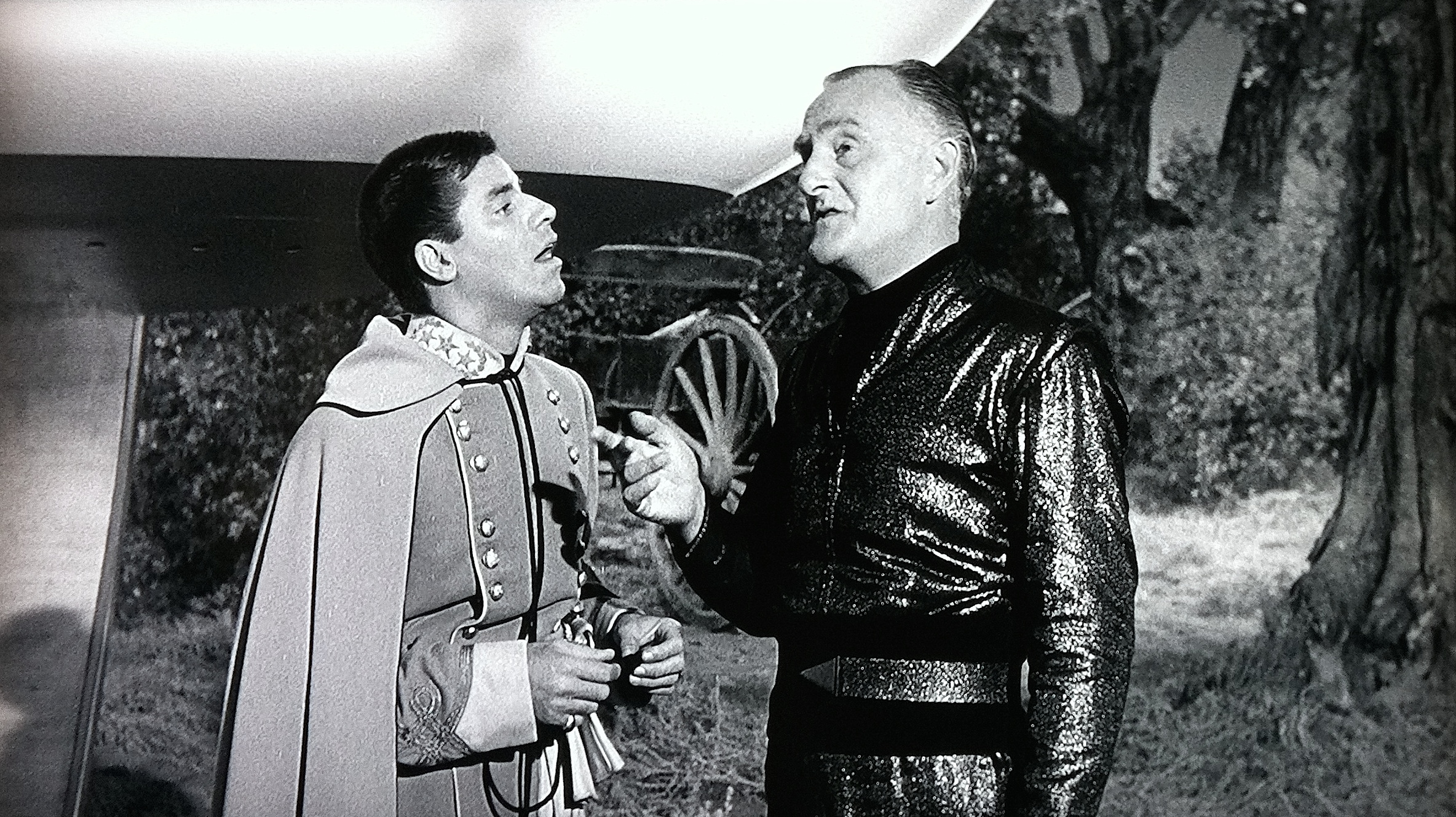 Through the ’60s, Lewis mapped out a career that allowed him to pitch his usual shtick against authority figures despite his advancing age. Then something shifted with Martin Scorsese’s The King of Comedy (1982), wherein Lewis, heavier, slower, a seething loneliness, plays a version of himself as an emotionally stunted but very adult talk show host who’s kidnapped by what could be seen as a deeply perverse version of his old Paramount persona, Rupert Pupkin (Robert De Niro), a socially awkward hanger-on with delusions of comedy greatness. It’s fun and tense watching an angry, morose, depressive Lewis trying to deal with Pupkin in a way his old characters, like Kreton, would never obey. It may be Lewis’s single greatest show of that particular side of himself on screen. 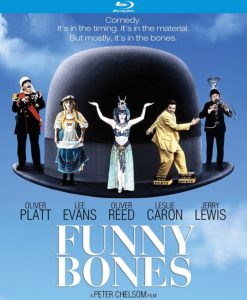 But he shows a much wider and deeper span of his nigh-on-multiple-personalities in the second Kino Lorber release this month, Funny Bones, directed with incredible detail and passion by Peter Chelsom. The movie is hard to pin down in its first thirty minutes. There are really two openings, two stories, nearly two brands of filmmaking going on in the first third of the movie. It’s not until forty-five minutes in that a solid connection is made between the story of Tommy Fawkes (Oliver Platt) and his fall from Vegas grace after his big shot at big time comedy goes belly up, and the story of Jack Parker (Lee Evans), a young oddball drifter with a streak of rage running from some murderous Frenchmen who blame him for the death of their friend, but who also shows signs of being the most gifted physical comedian in the world.

Their stories come together in the small town of Blackpool, England (the writer-director’s own hometown), where Tommy escapes to summon his lost mojo. He conducts an ad-hoc American Idol-type competition to find anyone who’s got anything new to say with comedy so that he can buy their material. The town of Blackpool, in this fiction as it was in reality, was the holiday town for nearby cottonmill workers, and something like a Catskills subculture of quirky singers, jugglers, comedians, and performance artists rose up. (Any film with this at its center is more worthy of the subtitle “A Comedy Akin to Vaudeville” than Visit ever was.) Many of the acts that pass through Tommy’s judgment are just a notch above or below Broadway Danny Rose territory, but they’re all embraced equally by the loving script and the director’s clear love for the world he grew up in, despite the look on Tommy’s face. You can predict, he eventually finds his muse in Jack’s inspired physical lunacy, and the movie is finally off and running. 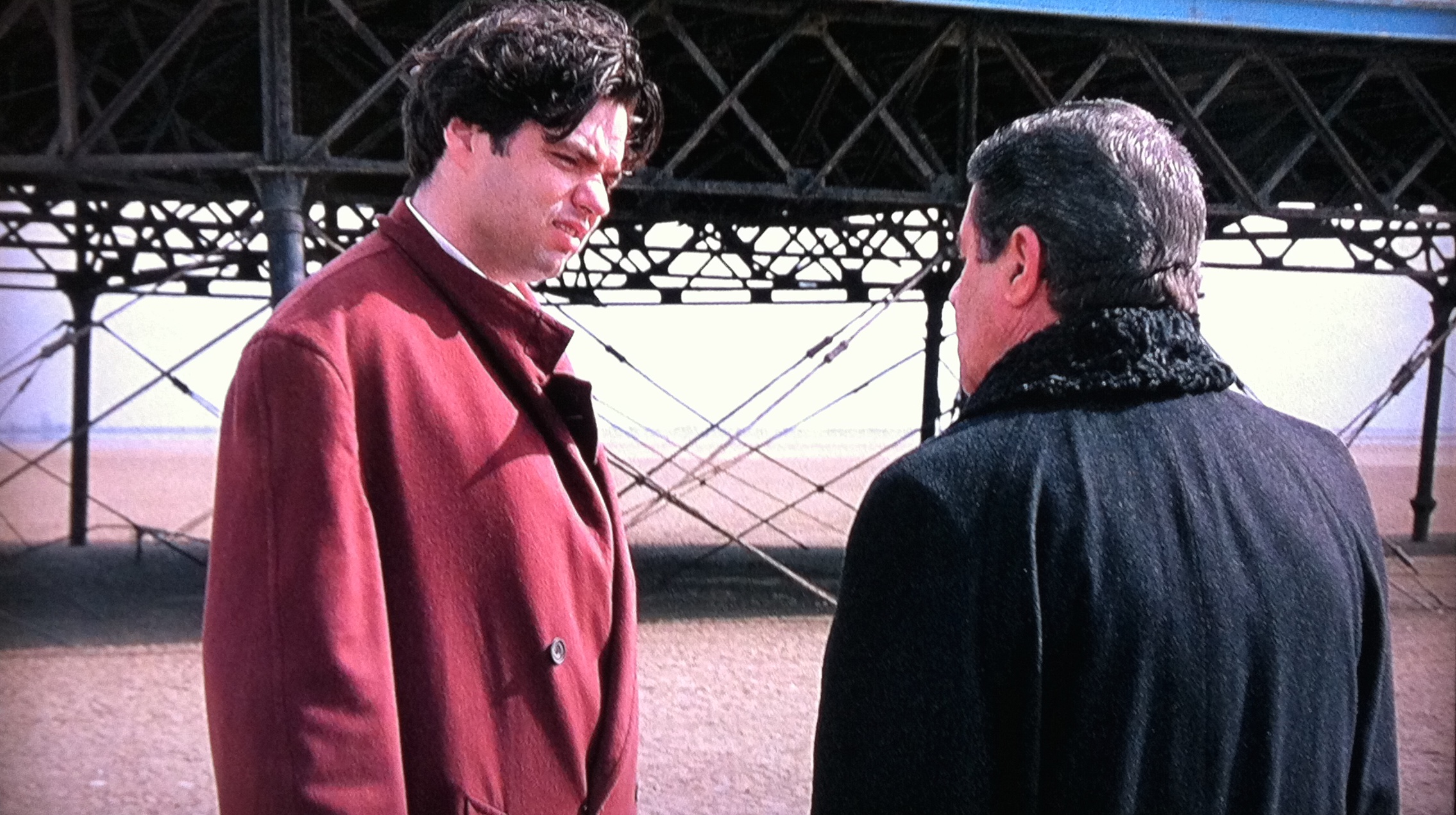 But where’s Jerry Lewis in all this? He’s everywhere. He plays Tommy’s father, George Fawkes, who just happens to be a legendary comedian who’s continually stealing Tommy’s thunder, but who wants nothing more than to see his son succeed. We get a dollop of Lewis in the opening act, there to merrily encourage his son before his Vegas nose-dive, and then we don’t see him again till the last half hour or so of the movie. But since Tommy’s every thought, conversation, and motivation is about his father and the wreck his success has levied on his life, Lewis never really leaves. When secrets are revealed about Lewis’s past, there’s a confrontation on a beach in Blackpool that is the heart of the movie. We see the full brunt of Lewis’s innate gravitas, a very real anger and a too-gut-punching-to-be-fake narcissism as he tells Tommy the truth about his own life and about Tommy’s lack of talent. The film, like The King of Comedy before it, lets us watch Lewis scold younger comedians, putting them in their place with all the gravitas afforded him by his decades of international preeminence, and with all the narcissism we always knew he could summon.

Lewis earned that beach speech with a million hours of being funny, so when he defines “funny bones” as that which real comedians have, but that most comedians just “tell” funny, it’s with the authority of an entire scrollable IMDb page. He has funny bones and it’s all over everything he touched, from broad vehicles like Visit, to flashes of inspired shtick that shine like gems from the later heart of darkness. 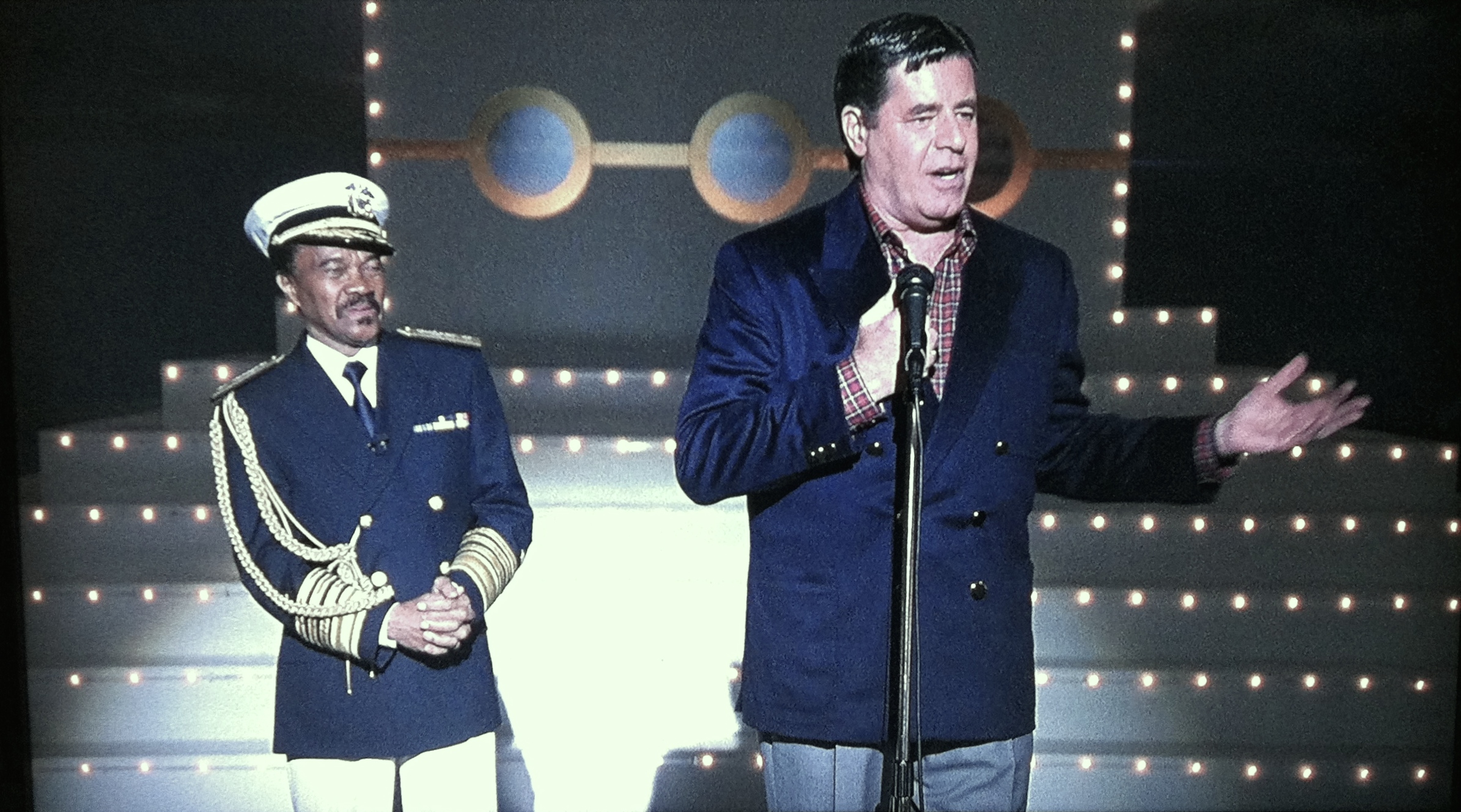