Elvis Is Never Not Cool, But Here He Twice Tempts The Bottom Edge 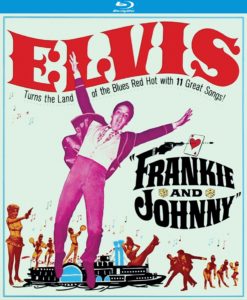 Elvis was two iconic figures, one sleek and gyrating, the other stuffed and sweating, both uncommonly sexual, but both bracketing a third strangely sexless version, pointedly defanged, constrained, and as artificially colored as a Twizzler: he’s the ’60s Elvis, neither confined by the Puritanically-straightjacketed barriers of early television, nor roaming free upon the Vegas stage, with its id-indulging spectacle of rolling sequins, butterfly collars, and caped jumpsuits, but stapled dull and droopy-eyed to a tack-board for all to see – this fictional pod-performer called Elvis, dropped into movie after color-brimming movie, premise after air-pumped premise for the world to see exactly what Hollywood could do to bleed out a bona-fide, live-wired conduit of southern-fried sex and soul. 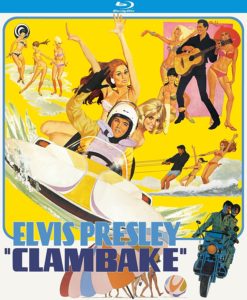 The movies he starred in during the ’60s were, on the one hand, light and fun and never meant to be taken seriously. The few out of the thirty-one that were true attempts at serious acting are buried by the overwhelming surfeit of quick-buck output, usually about three a year through the decade. Divining merit among them requires blinders, shutting out all the free-ranging adult fare that was blooming in the era of the big studios’ demise, so that you’re only left to compare any one Elvis film to the other ones. And in this way, you can at least be as earnest and honest as he was in each of them – meaning, you can like them for what they are, but usually not for what they mean to the culture at large, a culture that was more in the mood for rejection and recombination of older forms of entertainment than anything offered by the meager scripts and even more meager direction of most Elvis movies. 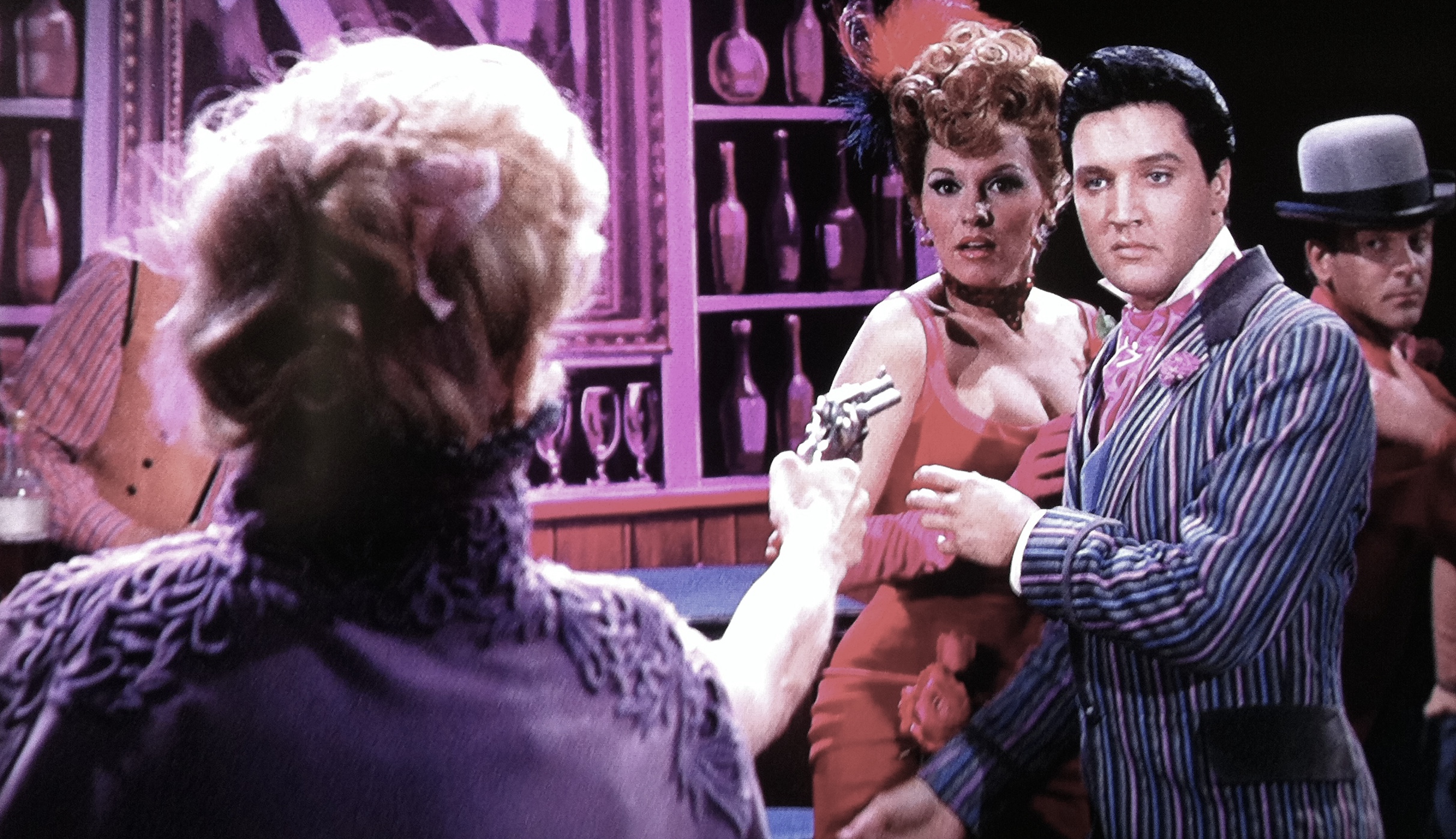 This is true especially as the decade pushed into its second roiling half, when these two films were made. The first, Frankie and Johnny, is a movie that’s more interesting for the history dripping off the title than for anything that happens on screen. Its story is the extrapolation of a true-life murderous love triangle in 1899 St. Louis (eventually told as: jealous woman Frankie kills cheating lover Johnny over trampy Nellie Bly) that made it into ballads of the time and eventually stuck to the American song book. In various forms, it was sung by greats as diverse as Jimmie Rodgers, Johnny Cash, Bob Dylan, Van Morrison, and Stevie Wonder, and the subject matter spawned a number of movies, or sometimes just movie moments – the best of which is a single, end-of-film dance number in the Cyd Charisse vehicle Meet Me in Las Vegas (1956), with the song being sung by Sammy Davis, Jr.

But the iteration at hand pushes it all near to the edge of meta-mashup-postmodernism by making it a showbiz story about Frankie (Donna Douglas) and Johnny (Elvis), two Mississippi riverboat entertainers in love, until the entrance of the captain’s old flame, Nellie Bly (Nancy Kovack), who wrecks it by inciting eventual gunplay. Meanwhile, Johnny’s songwriter, Cully (Harry Morgan), has a “new tune” for the duo based on their souring romance that they later sing and act out for the paying riverboat audience. That the song’s tragic conclusion only comes semi-true because of the performance itself (a blank is nefariously replaced by a real bullet) gives the otherwise milquetoast plot a conceptual jolt that is certainly not the point of the movie, and may not even be an intentional twist, as we think of them now, but may be the only lasting element of interest beyond its perpetuation of a folk standard.

Clambake, the second Kino Lorber offering, and the only one of the two with a commentary track, or any meaningful extras at all, is a de facto extension of AIP’s Frankie and Annette Beach Party movies that spanned the ’60s, the whole cycle awash in relative innocence, willful political ignorance, and blinding sunshine. Clambake is a prince and the pauper tale that capitalizes on a by-now hyper-exposed Elvis, ensconced in his Kingship, but who just wants to be treated like everyone else. He plays Scott, an oil magnate’s son who goes incognito, trading in his cherry-red Corvette Stingray for a more proletariat motorcycle and his heirhood for a gig as a waterski instructor in a Florida beach community, where he pines for the love of a girl (Shelley Fabares) only interested in wealthy men (like Bill Bixby’s rich cad J.J. Jamison III).

In among the jaunty beachside musical asides, there’s a lot of surfacey soul-searching as he glides in and out of interactions that test his resolve to keep up the “Henry V in amongst his subjects” routine, but none of it is any real challenge or threat – to him or to the have-a-good-time mandate of the subgenre. So he wins the big speedboat race, he gets the girl, who dutifully falls for the humble instructor, and he makes nice with his authoritarian dad (James Gregory), a cartoon cowboy with chomped cigar, a growling drawl, but mostly doting movieland love for his adventurous lad. It’s another in a long line of movies that props up a ’60s good boy Elvis as an anti-counterculture icon, in clear and present opposition to the ’50s bad boy Elvis that prefigured the counterculture to begin with.

Both films reveal an Elvis who seems only half there. You can read between his lines a kind of fatigue that must come from being a paper doll that costume designers fit with an outrageous array of outfits from scene to scene, from movie to movie – or, if not a paper doll, then a wind-up one, sent forth to belt out another top twenty hit. There are moments he’s so slovenly, dull, and hangdog, despite his sharp attire and the bouncy soundtrack that follows him around like a backbeating shadow, that he comes off like Robert Mitchum’s long-lost rockabilly nephew. But there are also moments when he snaps awake. Notably, in each of these two, it’s a scene with kids. In the first, Johnny sneaks away to nurse his wounds after losing the girl and the cash, and finds a young black boy shining shoes. Together they bop down the streets of ’20s New Orleans, Johnny on vocals, the kid on harmonica, and create a bluesy ray of old world sunshine that’s more pure and connected to actual life than virtually anything else in the movie. In Clambake, a little girl’s fear of going down a slide becomes a singing and dancing call for confidence featuring a horde of happy children as chorus for Elvis’s tuneful exhortations. It’s a scene that feels beholden to Gene Kelly’s great street corner, kid-party rendition of “I Got Rhythm” in An American in Paris, but it’s no less charming for showing Elvis (in keeping with the theme of the film) in among kids who probably don’t know him from Carl Perkins, but instead respond to him just for being a fun-loving adult.

It’s hard to imagine an actor today churning out so many movies in such a short time, so the metronomic output of thirty-one movies between 1956 and 1969 makes them, as a collection, seem interminable. But they have their individual charms, not the least of which is that you get to see and hear Elvis sing… a lot. And no matter how cookie-cutter the story is, or how innately over-it he may seem ambling through another ditzy plot, when Elvis sings you see his heart. He positively shivers inside the frame when music’s around, more often than not ebbing from him in some mystical and riveting way. But it’s the very fact of having that monumental energy corralled into the cheap artifice of another low-budget toss-off that eventually burdens the genuine article with several thick layers of gaudy Technicolor, until Movie Elvis becomes the only thing that could possibly make Vegas Elvis seem like a real person, not a construct, by comparison. At least in Vegas, even in the studded leisure suits, and even with the strange mix of swaggering bravado and embarrassed vulnerability, he got to be himself again, for just a few more years. 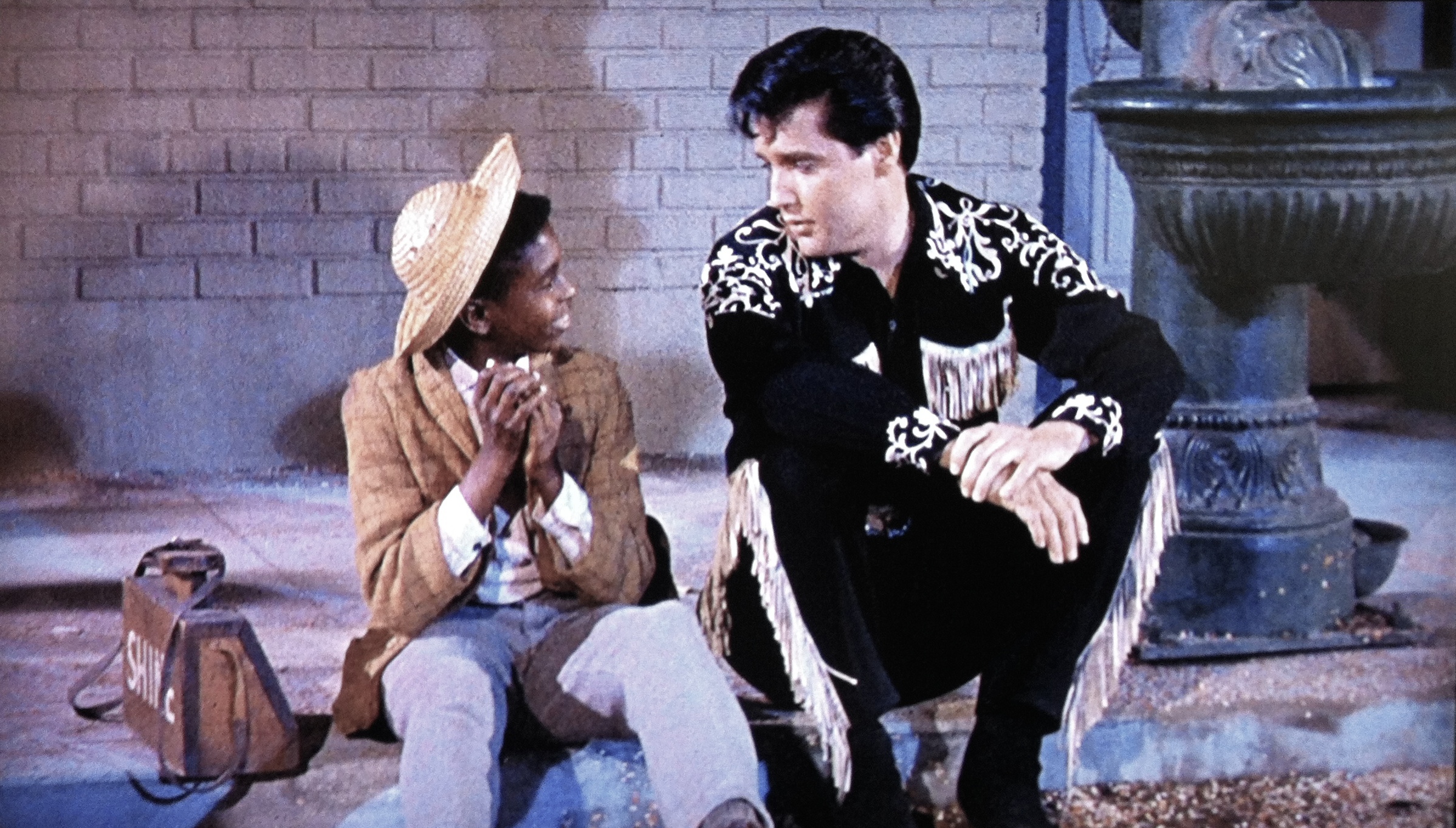