Paul Gauguin and Stuart Davis: Two innovators that moved art into the modern era. Gauguin (1848–1903) and Davis (1892–1964) make for a lovely pair for back-to-back viewing, too. To start with, Gauguin influenced Davis with his use of color, and both reflected the cultural change they experienced in their work.

Both artists are featured in documentaries from the National Gallery of Art now available on DVD from Kino Lorber. Including interviews from historians and art experts, these 30-minute documentaries show the range of these artists’ collections and give context to the history and personal experiences impacting them. While obviously excellent for the classroom, they’re well-told enough for anyone even with a casual interest in art to understand these influencers better. 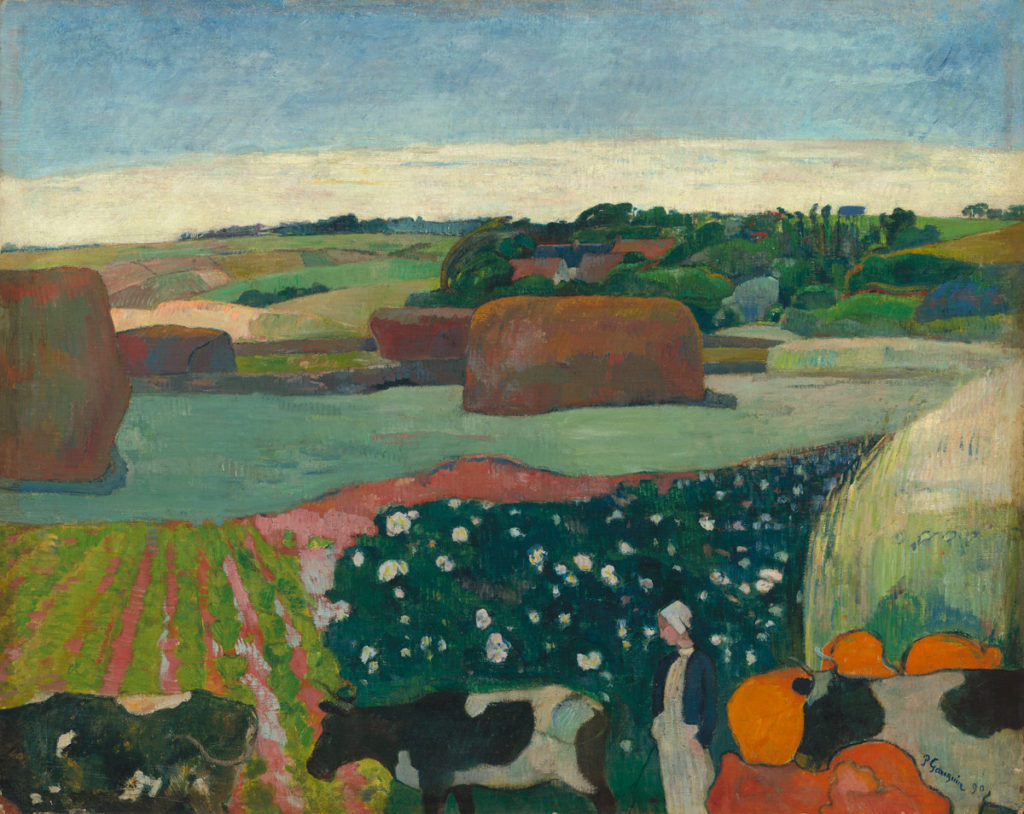 Haystacks in Brittany (1890) by Paul Gauguin 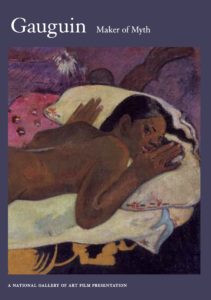 Narrated by Willem Defoe with Alfred Molina voicing Gauguin, Gauguin: Maker of Myth follows the artist from his birth in France through his travels to Brittany, Martinique, Tahiti, and the Marquesas Islands. We also track his artistic development from pastel-heavy Impressionism to a flatter, more abstract style accented by Surrealism. Maker of Myth dives into his less obvious influences, too, like Egyptian hieroglyphics.

The greatest strength of Maker of Myth is its emphasis on following the subjects and themes that repeat in Gauguin’s work. Gauguin returned to subjects like self-portraits and landscapes and continued to ask the same questions about faith. Though rooted in the Judeo-Christian tradition, the spiritual themes morphed to represent which culture he was immersed in at the time. For example, 1892’s Parau n ate Varua ino (Words of the Devil) depicts the temptation of Eve, but with a brown-skinned woman and fruit and a reptile native to the island he was living on at the time. 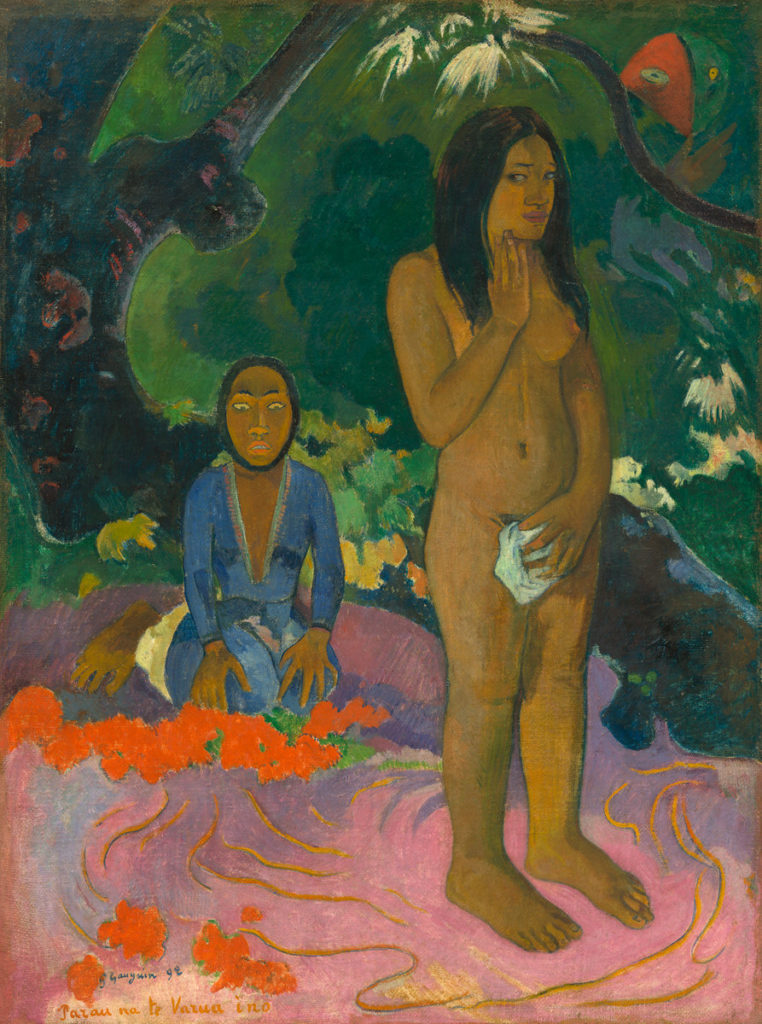 Intertwined with his struggle against temptation was his fascination with the Noble Savage archetype (a term that carries more baggage today than it did at the time). In Tahiti, he painted his lover and other bare-breasted women and named the portraits after the questions they seem to be asking: Aha oe feii? (What! Are You Jealous?) (1892), Eu haere ia oe (Where Are You Going?) (1893), No te aha oe riri (Why Are You Angry?) (1896).

Special features include a short video about the folk music in Brittany and a slideshow of the art featured in the film. While the folk video is too short to take anything away from it, the slideshow is helpful in showing Gauguin’s growth and summarizing the content of the half-hour film. 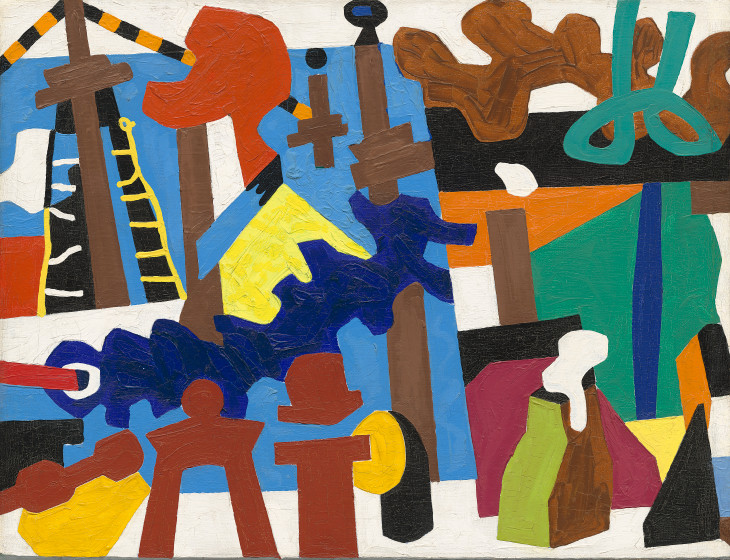 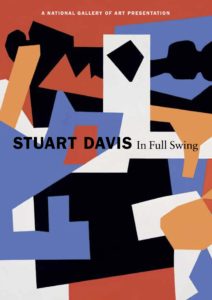 Just a few years after Gauguin’s death, Stuart Davis dropped out of high school to begin studying art in New York. Like Gauguin, his style became less realistic as his talents grew. By the time of his death, viewers needed a close eye to determine the figures even in city landscapes.

Stuart Davis: In Full Swing is narrated by John Lithgow and pulls off the lofty task showing how history defines an artist. Davis drew inspiration from Henri Matisse and Pablo Picasso, as well as the radical change in American society and the birth of jazz music. (Appropriately, the jazz that set the soundtrack for the Modern Era also graces the soundtrack of this film.) With his bright colors, emphasis on shape, and jazz as his muse, his canon bears comparison to Piet Mondrian.

“Davis believed the experience of modernity was an experience of simultaneity,” explains Curator Barbara Haskell of the Whitney Museum of American Art. “We’re in an urban environment and exposed to a cacophony of sounds and shapes and noises and [he believed] the aim of the artist was to bring that cacophony and disharmony into order and harmony.”

Davis’s work intersected with advertising and politics of the time, but perhaps what made him stand out most from his contemporaries was his sense of optimism. While many responded to the transformation of America with fear, he took a different approach: “One can respond to events in a depressing or positive, exultant way,” he said, “and so I regard myself as one who can select the positive and make it an environment for myself and those who care to look at it.”