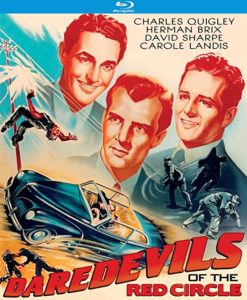 Without a superhero or ancient catacomb in sight, Daredevils of the Red Circle is nevertheless hailed by many in the know as the greatest of the vintage multi-part adventure serials.

Each chapter (except the first one) begins with a series of photo title cards, recapping the important story points of the moment, and introducing key cast members:

39013 (aka 39-0-13; aka Thirty-Nine-O-Thirteen), a vengeance-driven prison escapee, has secretly captured and is now impersonating the housebound wealthy oil mogul responsible for his incarceration! 39013 is brilliantly played with undiluted diabolical fervor by Charles Middleton, best known for playing Ming the Merciless in Flash Gordon serials of the era.

Granville! (Miles Mander), the very wealthy oil mogul being impersonated against his will, is a good hearted man with almost as many connections as his mansion has secret passages. Mander does serviceable double-duty throughout the serial, playing both the desperate and confined Granville and 39013 in his guise. 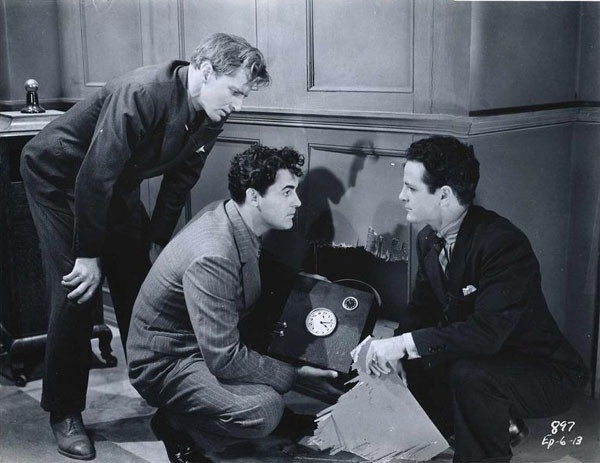 The Three Daredevils! Men without fear, in suits!

The Three Daredevils! are a group of death-defying circus performers, find themselves unrelentingly on the trail of 39013 following the early loss of one of their own amid one of the villain’s disastrous plots – a major fire at the carnival. Subsequently, most of their adventures play out at oil refineries, just the type of industrial setting that would host big-budget daring-do decades later in Terminator 2, and a myriad of other such films.

Each Daredevil has a signature ability:

Gene! (Charles Quigley) is the brains. With the most lines and the only Daredevil to warrant his own opening title cards, he’s the one most prone to nearly biting the big one in the various cliffhangers. It’s also Gene who gets to outrun a title wave while riding a motorcycle through a vast underground tunnel. It’s the coolest of all the cliffhangers, and happens at the end of the very first chapter.

Bert! (David Sharpe) is an escape artist who finds his way out of more than one precarious jam. Sharpe went on from his stint at Republic (the studio behind this production and numerous other great serials) to a career in stunt work. As Bert, he gets to be a full fledged stunt actor.

Tiny! (Herman Brix), being the muscle of the group, doesn’t say much, but his strength impressively borders on superhuman at times. In the very first chapter, he must pull a zip line taut with his teeth so that his fellow Daredevils can escape an inferno. He also lifts all sorts of heavy objects, and always looks swell doing it. Brix was a champion athlete in real life who later changed his name to Bruce Bennett as he found fame playing Tarzan.

They’re helped along by an unknown aide who goes by the name “The Red Circle”. The Red Circle, being someone within the house and with access to 39013’s various plots, leaves notes of vital intel for the Daredevils, all bearing the mark of (you guessed it) a red circle. (Although it looks more like a coffee ring, as this serial is black & white). The central mystery of the identity of the Red Circle is wrought with intrigue for anyone under the age of six. The suspect pool quickly narrows to that of a Scooby-Doo cartoon, or lower.

Daredevils of the Red Circle is nothing short of a blast, and fun for the whole family, with a few caveats. (See below). Perhaps more impressive that the series of close calls and tight escapes that the heroes manage is the fact that they do most of it dressed to the nines in three piece suits – with never so much as a hole in the knee.

But here’s the thing – I realized some time ago that old time serials, no matter how fun they are at the start, always wear me down. No matter how pulpy or punchy they are out of the gate, they always turn plodding. Even as a less discerning high school aged youth, I discovered that a fella could only spend so much time with cardboard characters being run through a repeating gauntlet of low production value and stock cliffhangers.

Then, I realized that these things were never intended to be binge watched. Back in the day, one twenty-plus minute chapter per week would be released to cinemas. Kids would diligently trek every Saturday morning to find out what happens next. How do the heroes survive whatever deathly calamity we last saw them in? 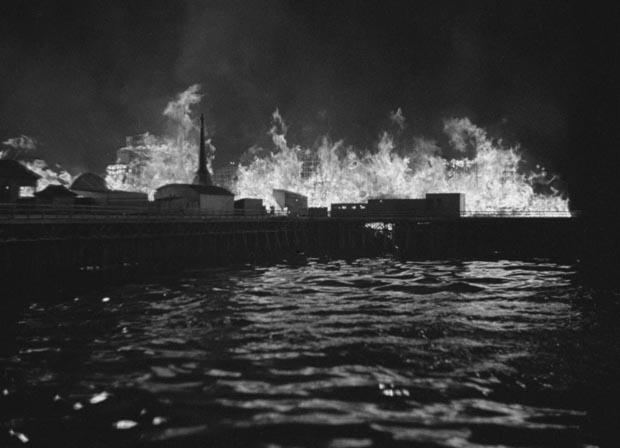 My kids and I had a ball as we worked our way through Daredevils, a few chapters per week. (I realized that if I did more in a single sitting, it would negatively affect my own intake of the serial, thus coloring my review). The kids got into the mysteries of the piece, and guessing the outcome of the many cliffhangers.

Being that it’s a product of 1939, we’re left to contend with the continuous marginalization of the film’s only African-American character, Snowflake, the house servant. Though the actor playing him, Fred “Snowflake” Toones, displays some accomplished clowning, his antics and dialect can only be described as “hashtag problematic”.

Not quite as offensive, the female lead – indeed, the only female in the entire affair- Blanche (Carole Landis), has so little to do that she essentially vanishes from the plot for chapters on end. The dog, Tuffie, on the other hand, shines as one of the great heroes of the piece. 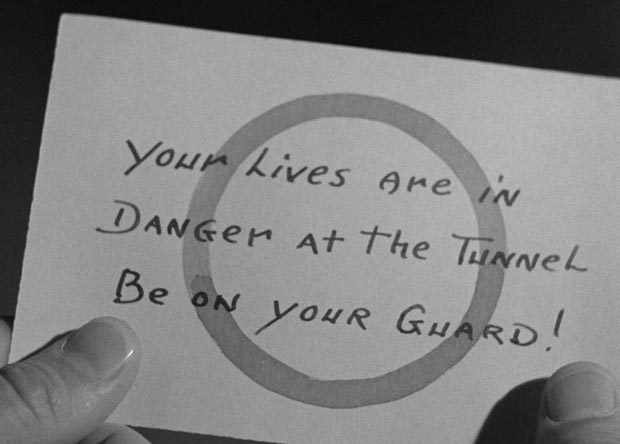 Daredevils of the Red Circle does indeed live up to its reputation as one of the best of its ilk. In the greater scheme of film history, that may sound like minor praise, but in some ways, perhaps, just maybe, Daredevils is the film project of 1939 that mainstream movies today most strive to emulate. Never mind that most people today haven’t heard of it – in what’s remembered as “cinema’s greatest year”, which gave us Gone with the Wind, The Wizard of Oz, and Mr. Smith Goes to Washington, which of all of them do popular movies of today most resemble?

Previous to this first exposure to Daredevils, I’ve said John Ford’s Stagecoach is the most influential of 1939. And while the modern action film owes a bit to Stagecoach for popularizing action thrills and character pathos, the wall-to-wall action agenda of today’s biggest blockbusters come straight from adventure serials. The linage seems to extend from there to certain Hitchcock, then James Bond (both often built around action set pieces), then Indiana Jones (who’s an outright serial homage), and onward into the glut of today. Perhaps, rather than further encouraging Hollywood by seeing the latest hollow Pirates of the Caribbean and Transformers movies, support boutique Blu-Ray labels, and dive into the more innocent past with Daredevils of the Red Circle? 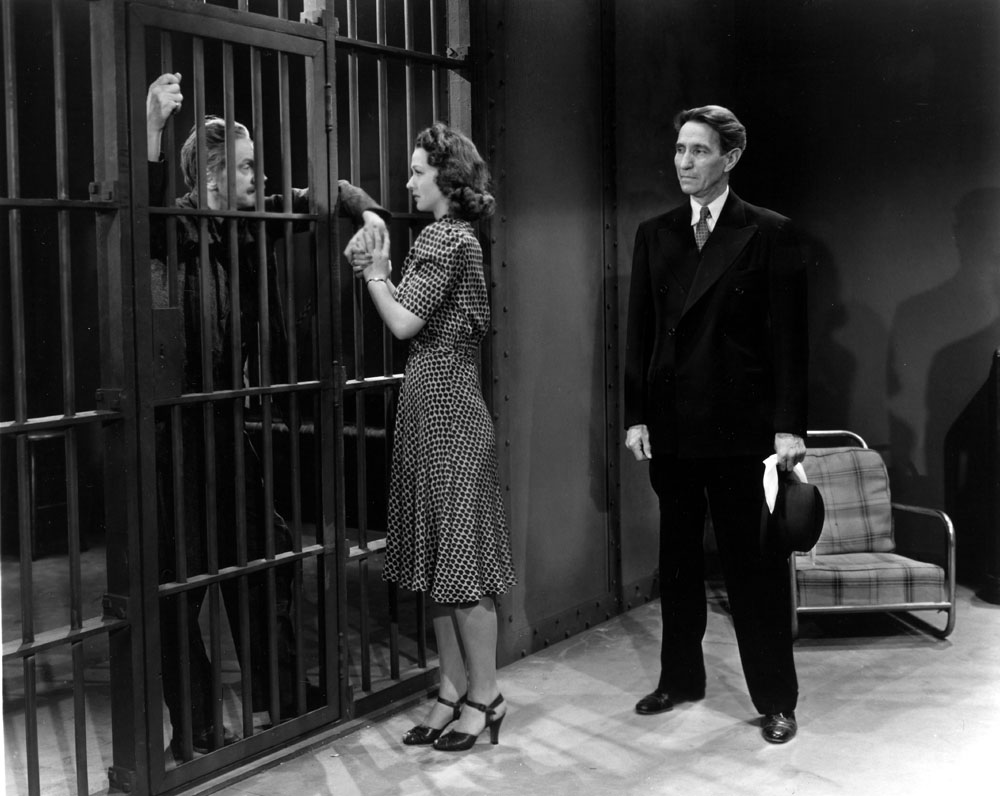 Granville is helpless in his cell, as witnessed by Blanche. Blast you, 39013!!

Available now thanks to Kino Lorber’s Studio Classics imprint, Daredevils of the Red Circle looks and sounds truly amazing for its age and ilk. The only bonus feature is an informative and lighthearted commentary track on four of the chapters, by film historian Michael Schlesinger. Both families and film buffs could do a lot worse than to fly into The Red Circle!