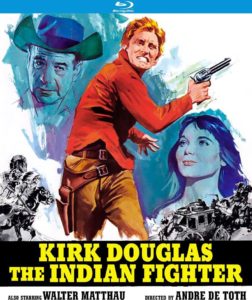 Kirk Douglas is Johnny Hawks, frontiersman, guide, and onetime soldier, in the actor’s first film for his own production company, Bryna (named after his mother.) Co-starring Walter Matthau (in his second movie), Diana Douglas (the actor’s by then ex-wife), Walter Abel (aptly able character actor), three “Jrs.” in Elisha Cook, Alan Hale, and Lon Chaney, and “introducing” Italian model Elsa Martinelli – who with fellow non-Native American actors Hank Worden, Harry Landers, and Eduard Franz are made up to represent the film’s principal roles of the Sioux tribe – this prime-era Western, smack dab in the middle of the decade in which the genre enjoyed its greatest popularity, is at first glance rip-roarin’, double-fisted adventurin’ writ large.

Directed by Andre De Toth, best known for the 3-D House of Wax (1953), but whose career from the mid-40s through the ’50s was defined by tough thrillers (Dark Waters [’44], Pitfall [’48], and the genre-defining Crime Wave [’54]), alongside noir-ish Westerns (Man in the Saddle [’51], Springfield Rifle [’52], and the equally genre-defining Day of the Outlaw [’59]), The Indian Fighter bears the hallmarks of a seemingly unassuming genre entry which succeeds initially as entertainment, but retains lasting impact as a troubling and ultimately subversive product of its equally adventurous artistry.

This criminal act erupts in violence, during which Grey Beard is murdered, and escalates into a full-blown assault by the wronged Sioux on the wagon train; climaxing subsequently, and screen-spectacularly, on an epic-scale siege on the army fort itself. Hawks, torn between his reputation as an “Indian killer” and his ingrained sense of justice – while additionally conflicted by his growing love for Red Cloud’s comely and frequently-bathing daughter Onahti (Martinelli) – attempts to reconcile his ever-shifting loyalties by fiercely horse-riding back-and-forth over the widening wilderness where frontier borders are rapidly narrowing in on its natives, even as its new settlers push ever-westward.

Despite the numerous action set-pieces, many actors appear to great advantage in this tough De Toth Western. Walter Matthau made his villainous screen debut the year before with Douglas’ fellow ’50s-era, barrel-chested stalwart-in-arms (and -legs and -midsection) Burt Lancaster in The Kentuckian, cracking a bullwhip at the star’s toughened flesh, and his offbeat presence proves equally memorable to his character’s acidic, side-mouthed utterances here. And Diana Douglas’s no-nonsense presence as single mother Susan Rogers, in spite of or perhaps because of her deft handling of bratty progeny Tommy (Michael Winkelman), also proves for both the era and genre uncharacteristically insightful regarding what a lone woman’s life on the trail might have been like.

But The Indian Fighter is nonetheless dominated by its star and producer Kirk Douglas, whose athletic and exclamatory performance style is well-served by both the fisticuffs the story demands and moral choices his character faces. With at least passing irony regarding the title, in which his character is alternately admired and derided for his past exploits, his own ambivalence is reflected in his self-conflicted bearing.

In one scene, Douglas as Hawks roughly chides scenic photographer and former Mathew Brady assistant Briggs for “spoiling” the vast beauty of the Western landscape, by attracting increasing numbers of settlers through the camera’s images, but later, during the fight outside the fort, risks life-and-limb to retrieve the instrument, scooping the fallen camera up from the battleground at a full gallop. This classic “saddle-grab” stunt provides a funny, almost throwaway payoff, then, when Hawks drops the rescued camera on a disconsolate Briggs lap, but goes a long way in explaining his character’s rough appeal. Even, similarly, how a zestful grin after being equally rough with Sioux princess and bathing beauty Onahti may not wholly make up for Hawks’ sexually untoward behavior, especially from a latter-day perspective, but at least is consistent with if not entirely excusable from the “wild” that goes along with a man who has lived so long in the wilderness.

Westerns and film historian Toby Roan provides an informative feature-length commentary to Kino Lorber’s visually-impressive Blu-ray presentation of The Indian Fighter, and invaluably places the film and Western within a genre continuum, beginning with John Ford’s Fort Apache (1948) and Delmer Daves’ Broken Arrow (’50; out from KL last month, and also reviewed on this site) and culminating with Ford’s masterpiece The Searchers (’56), that increasingly portrayed the conflict between Native Americans and white settlers in complex and morally ambiguous terms. Shot in CinemaScope, Technicolor, and on location in Bend, Oregon, the “reality” of the West is given full expression through the straight-ahead, go-for-the-gut style of director De Toth – even, as pointed out in Roan’s commentary, going so far as to insist that the film’s army fort be fully constructed as opposed to merely making-do with a plywood-and-plaster movie set – that neither stints on the natural scenic appeal of the setting nor the inherent violence of the period. Both troubling and beautiful – simple and complicated, as well as funny and grave – The Indian Fighter is in the final analysis everything a good Western should be.

The images in this review are used only as a reference to the film and do not reflect the actual image quality of the Blu-ray.