Double Helping Of Spaghetti Westerns For A Belly Full Of Lead 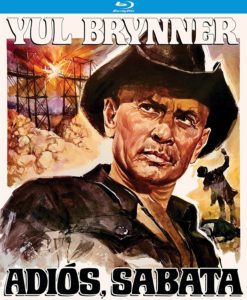 The success of any spaghetti western rises and falls on the whip-crack of its coolness, how richly it adorns itself in the inflated go-to iconography of the subgenre. That is to say, nobody’s stopping by for the plot, but for the play. The style isn’t always high caliber – the examples from this first 10-year wave were often low-budget, sometimes ad-hoc affairs – but there’s the unquenchable exuberance of a creative kitchen sink, let’s-try-this, dog-pile application of film techniques in an operatic conflagration that only the inventors of opera could manage.

There were a few efforts at a proto-spaghetti style before the1964 original Italian release date of A Fistful of Dollars, but it was only after eyes and ears had beheld Sergio Leone’s indelible, gut-arresting wrangling of all the elements that the category was officially christened. That and its two sequels (For a Few Dollars More; The Good, the Bad, and the Ugly) were the muscle behind any and all future adventures in this warped, foreign, fun-house reinterpretation of a genre that had become as sandy and bland as a hasty desert grave: Leone fused Italian braggadocio and Akira Kurosawa’s compositional prowess (not to mention his Yojimbo plot) with an irreducibly American product and defibrillated a wan species into a brand new animal.

What followed in the wake of Leone’s triptych – and his masterpiece, Once Upon a Time in the West – was a hit or miss bunch, each swiping at Leone’s mantel but none ever grasping it, yet were as a whole a remarkable collection of indomitably energetic adventures in treachery, gold acquisition, and lots and lots of dirt. With their sense of “no rules matter” and the full roster of broadly-drawn Saturday-morning characters, they’re the closest thing we have to a kid’s backyard cowboys and Indians with a budget. No still photo can do justice to the movement that is the keynote of any spaghetti western, with its over-pronounced histrionics, quick edits, and its constant, often random zooms, many times zeroing in on a completely random person or to emphasize a completely unnecessary detail – camera as egalitarian collagist.

By the release of Adiós, Sabata and its sequel Return of Sabata, both themselves sequels to Sabata (1969; not part of this Kino Lorber single-day release, and never seen by this reviewer), the genre had devolved from Leone’s sweaty confections into something like a parody of itself – though not strictly in a pejorative sense, as the over-the-top masculine gusto at the heart of Leone’s films essentially remained, but rather from the lack of his absolute control over aural and visual tools, which makes them less enveloping as sagas, yet still wonky enough in their self-awareness to be enjoyed for all the surface pleasures they were happy enough to indulge in.

Both movies play out the same essential Yojimbo-forever mythology: Sabata is a laconic, larger-than-the-west figure entering a fraying social dynamic and saving the day. Yul Brynner is Sabata in Adiós, his Russian accent and all-around strange body language cutting the same out-of-place presence as in The Magnificent Seven, except this time employed for its otherness rather than its inherent strength. (He’d finish drawing the line from amiable cowboy to heartless killer cowboy a couple years later in Westworld.) Here he’s amiable enough, as unblinking monoliths of justice go, showing his magnanimity by tossing his financial reward at the nearest charity. A good guy never works for any reward other than having forced at gunpoint the serving of justice.

The fun of the movie is the clever creation of his basic indestructibility – the first half hour is a litany of scenes that test, then prove, his ultimate prowess with firearms, especially his special-made “harmonica” rifle, wherein a straight row of bullets (rather than a circular barrel) is fed through the hilt – adding a flare of panache by stashing his cheroot in the last hole. The movie’s set up like a heist, as Sabata gathers his team of oddly-talented miscreants (one guy drops ball bearings into boot grooves and swing-kicks them into the brainpans of his enemies) to help reclaim a wagon of gold stolen by the evil Austrian Colonel Skimmel, whose other pastime is randomly shooting revolutionaries in the streets from the comfort of his balcony. So it’s a Russian vs an Austrian in a Mexican town shot in Spain by an Italian – an international détente for the sake of a couple hours of killing. 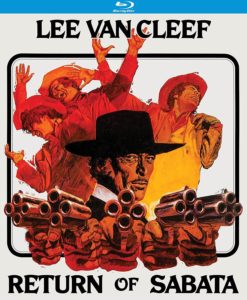 Where Adiós, Sabata is more clever and quickly-paced and full of funny character moments and mini-meta moments (the whistling theme music that follows Sabata around is at one point played by Sabata on an out-of-tune saloon piano) and seems to exist so director Gianfranco Parolini (billed as Frank Kramer) can find new ways to show people dying in supremely cinematic ways, Return of Sabata is more a slave to its story and types, as if afraid to unhand its predecessor’s success and find its own. And Lee Van Cleef as Sabata – he originated the character in the original Sabata – is simply a less interesting figure to watch. Rather than Yul’s flamboyant all-black, all-fringed outfit and too-tiny black hat, Van Cleef is in typical western wear and sports a more jocular, less-threatening air than Brynner, seeming not so much the brazen but reluctant hero, but the wisely circumspect babysitter to a gaggle of oddballs.

Return is also about the rescue of ill-gotten cash, its main difference from Adiós being its more town-bound action. Where the former is in the Mexican brush, Return is set in a Texas frontier town and revels in the staid and true locales of classic westerns: saloon, hotel, church, dusty central thoroughfare – for a bloody showdown of course. Return, also directed by Parolini, though made in ’72 allows for more of a ’60s vibe with its soundtrack (by Marcello Giombini as opposed to Bruno Nicolai’s heavily Morricone-influenced Adiós score) and some of its lighting and look – not an inherent strike, outside of being a major step removed from the overall feel of a typical genre entry.

Never mind all the flaws, we’re here to have fun, and there’s a deep infusion of friendship throughout both movies that lends itself to the “friends making a movie together” vibe. Aiding this is the presence in both of open-faced character actor Ignazio Spalla (billed as Pedro Sanchez) – such a dynamo of twinkling-eyed good nature, he defuses any sense that the gangly plot or colorful violence might get too out of hand. Ultimately, neither of these films will ever make the top of anyone’s favorite spaghetti westerns list, but both are properly dripping with the kind of sunburned charm one hopes to find on the other side of the snapping, whistling, freeze-framing opening credits.