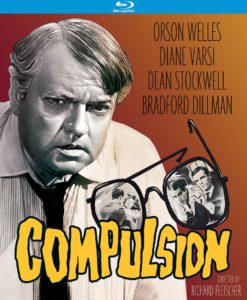 The middle chapter of an unofficial trilogy of one-worded crime thrillers, following Alfred Hitchcock’s Rope (1949) by a decade and preceding independent writer-director Tom Kalin’s Swoon (1992) by several decades, director Richard Fleischer and Twentieth Century-Fox’s Compulsion is likewise based on the Leopold and Loeb murder case that scandalized middle America in the 1920s. Onetime reporter Meyer Levin’s best-selling account, adapted as a Broadway play in 1957-58, arrived on-screen in appropriately lavish Hollywood fashion; a pioneering “true crime” docudrama that, though partly fictionalized (the names were changed to protect the property from litigation from one of the murderers then still-living), faithfully records the real-life planning and trial-aftermath of the Chicago, 1924 kidnapping and murder of 14-year-old Bobby Franks by wealthy, brilliant college students Nathan Leopold and Richard Loeb.

With its overtones of race and class, the ethnically-Jewish, well-to-do pair (who were also lovers; an element not directly addressed in screen treatments until 1992’s Swoon) are here played by Dean Stockwell, as Nathan Leopold stand-in Judd Steiner, and Bradford Dillman, as Richard Loeb stand-in Artie Strauss, who together form a toxic “third personality” capable of plotting and executing a senseless and cold-blooded murder. The former the reserved, passive participant and the latter the outgoing aggressor, Steiner and Strauss’s Compulsion of the title finds calculating Steiner “taking his orders” from glib Strauss in the opening scene, narrowly missing a drunken pedestrian with their swank Stutz Bearcat; establishing a dynamic that will presumably find its tragic outcome in the duo’s “perfect crime”.

And I say “presumably” because the murder itself is never shown, and we are only privy to its full details well after (and into) its investigation and resulting prosecution; a device that may have increased the suspense and tension of the subsequent drama in its day, but today plays, according to Kino Lorber’s Blu-ray audio commenter Tim Lucas, as if a crucial punch has somehow been pulled.

Powerful as Stockwell and Dillman’s performances as the young killers are, the acting plaudits are nonetheless reserved for top-billed Orson Welles, in a theatrical though significantly underplayed performance, as defense attorney Jonathan Wilk. Unobtrusively entering the CinemaScope frame at the 1 hour and 7 minute mark, the remaining 36 minutes of the film are dominated by Welles’ soft-growling interpretation of the real-life Clarence Darrow, his full 10-minute closing argument against the death penalty an impassioned plea ending on the formidable actor’s deflated enunciation of the word “love”. An actor’s showcase if there ever was such, one can almost forgive the unconvincing make-up apparently insisted upon by Welles as he glares through face putty more suited to the distance of the stage than to the proximity of the camera.

Visually, Kino Lorber treats us to a brilliant-looking 4K restoration with their first visual transfer to Blu-ray of Compulsion, whose crispness and visual detail continues to heighten the immediacy of the black-and-white, CinemaScope images. Tending to appear “blown-out” and “wavy” on previous DVD and VHS releases, KL’s Blu-ray of Compulsion finally gives us a clear glimpse through the pair of eyeglasses that famously (and accurate historically) convicted the pair of unrepentant thrill-killers. Previously mentioned audio commentator Tim Lucas also continues to be both informative and informatively interpretive in his close analysis of the surface and subtext of Compulsion: my particular favorite nugget of information provided by Mr. Lucas being that Dean Stockwell, having originated the role of Judd Steiner on Broadway, lobbied (unsuccessfully) to have his Broadway co-star Roddy McDowall repeat his role of Artie Strauss for the film! Effective as Dillman is in the showier role, one suspects that Orson Welles might have had further cause to worry had he to contend with not one but two former child actors creepily essaying screen psychopathy.