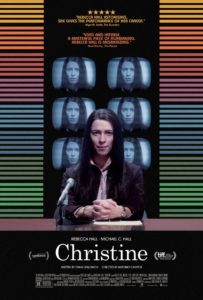 That’s the familiar sound of an alarm clock being ignored. Just such a shrieking scene plays out in the new film Christine, a darkly dramatic ordeal detailing the last weeks in the life of Sarasota, Florida news personality Christine Chubbuck. Chubbuck infamously took her own life at the WXLT anchor desk on live television in 1974. As we sit witness to the slow, painful mental unravelling of this 29 year old public figure, there are indeed alarms sounding everywhere. Some are glaringly literal, like this one; many more grotesquely metaphorical. Like the clock, all go ignored.

Directed with an odd tonal flair by Antonio Campos (Simon Killer), Christine (not to be confused with John Carpenter’s homicidal car movie from the mid 1980s) plays out as a period-accurate garish descent. It’s nearly as ghoulish and every bit as coldly fatalistic as Bob Fosse’s Star 80, another film that used true life celebrity death as its hook. (In that case, murdered 1980 Playmate of the Year Dorothy Stratten.) Even as the movie comes forth espousing all manner of on-the-nose commentary about the cheapening of the new media, its inherent wallowing in morbidity is inescapable. Without prior knowledge of Chubbuck’s fate, there is no draw. On the other hand, going in with that prior knowledge makes the whole affair a bleakly questionable undertaking. Why was this movie made? Who is it for??

Even as the movie comes forth espousing all manner of on-the-nose commentary about the cheapening of the new media, its inherent wallowing in morbidity is inescapable.

Prior to the internet era, the story of “the news lady who shot herself on TV” was primarily the stuff of urban legend. Kids on the playground would swear it’s true, then another kid would yell “Nuh-uh, you only saw that in a movie!” Now, if nothing else, we can state with firm confidence that both assertions can be true. 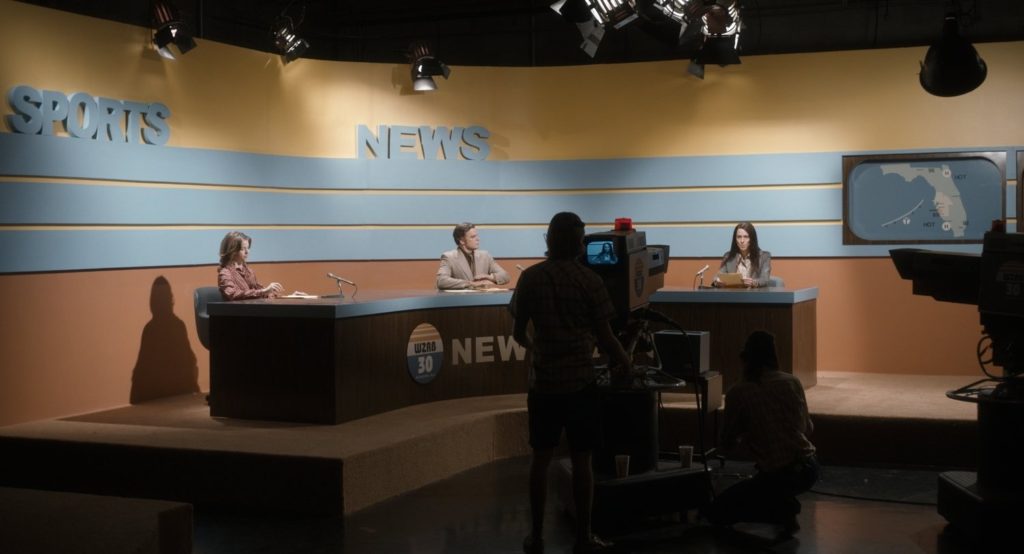 The movie in question that the hypothetical playground skeptic may’ve been thinking of is Network, director Sidney Lumet’s revered dark take on media sensationalism and the soullessness inherent in television news. The story of Network famously hinges upon the on-air unfraying of trusted national newsman Howard Beale (Peter Finch), who promises viewers that he will soon take his own life on the air. Hailing from 1976, only a few years following the actual Chubbuck incident, Network screenwriter Paddy Chayefsky’s rightly adored screenplay continues to be held up for it’s stunningly prophetic look at the shape of media culture as opposed to being a riff on something that had already happened.

Perhaps that’s a testament to Chayefsky, Lumet and Finch’s work (the latter of whom also died in real life, making Network his own career sign-off), as its forward thinking qualities overshadow any indictment for opportunizing the death of Chubbuck – something it surely would face if all of this happened today. Slate.com would go nuts. (For the record, Chayefsky claims that he began the Network screenplay months before Chubbuck’s suicide.) Or, maybe it’s all yet another affirmation that when it comes to the unending news cycle, even back then it was all about looking, nay, plowing forward, never looking back. Even when it comes to the self-sensationalized death of a news anchorperson.

When it comes down to it, the unfocused righteous rhetoric blabbed forth by the increasingly frustrated Christine in her newsroom isn’t anything we haven’t heard many times before, and not just from Network.

Yet, if it seems that there’s more to say about Network than Christine, you’ve tuned in well. While the existence of not one but two 2016 films dwelling on the Chubbuck incident demonstrates a certain artistic willingness to finally look back on this, the question of “why” remains a grave one. (The other Chubbuck-centric film is Robert Greene’s more enthusiastically received documentary Kate Plays Christine.) We can speculate until we’re blue in the face, especially considering the deathly internal state of TV news circa 2016, what with its collective stumble to fixate Mussolini-like on Donald Trump with obsessive repulsion, or fall in practically lock-step with the whispered suggestions of Hillary Clinton, or the shocking-to-no-one revelation of Fox News as an internal sex farm. But when it comes down to it, the unfocused righteous rhetoric blabbed forth by the increasingly frustrated Christine in her newsroom isn’t anything we haven’t heard many times before, and not just from Network. Everything from Good Night, and Good Luck to Broadcast News to even Anchorman not only beat this movie to the intellectual punch, but did it far more effectively. 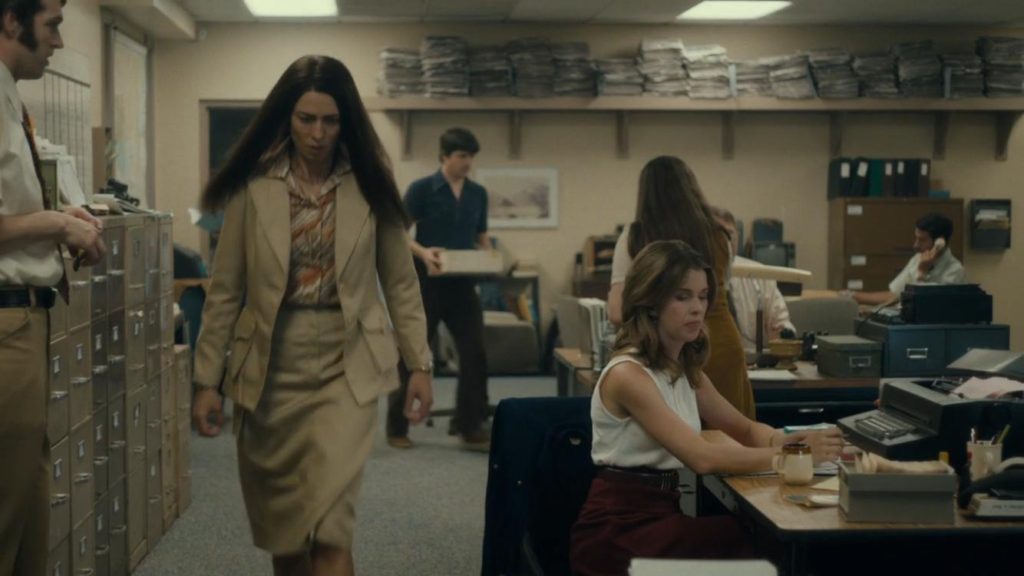 Rebecca Hall as Christine, storming through the newsroom.

Rebecca (Hall) plays Christine. In her most endearing moments, she gazes into the mirror, her reverse image – the one she sees regularly – displaying a more conventionally beautiful woman, her hair parted more effectively to better play up her natural facial features. She takes a minute to smile at herself, being this radiant person that no one else can witness. All other times, she’s a festering, decidedly unsmiling mess that no 1970s self-help fixes can mend. There’s a conflicted sensitivity and tragedy all it’s own in Hall’s doing this role.

For what it’s worth, Hall’s performance measures up with what Chubbuck’s own Wikipedia page offers. Not only are the circumstances surrounding her death depicted as reported, so too are the surrounding character speculations of why she pulled the trigger: She was lonely, she was a virgin, she was having reproductive organ issues, she harbored an unrequited crush on a co-worker. All terribly unfortunate, and all pushed into place as little more than puzzle pieces leading up the big bloody moment. I can’t imagine the actorly stresses Hall had to endure in playing this part. How does one pick up a gun and re-enact the death of a woman she’s spent months resurrecting, a woman remembered only for how she died? Unaddressed is the shock-impact of Chubbuck’s horrible, final power play on the Sarasota community.

I’d imagine that Christine, despite the evidence of effort and toil put forth in its creation as a would-be time capsule, will likely play to an audience no more comparable in size to the number of real life TV viewers in Sarasota on that fateful night in 1974, when Chubbuck offed herself as the original mad prophet of the airwaves.