DIRECTED BY WILLIAM A. WELLMAN/1948 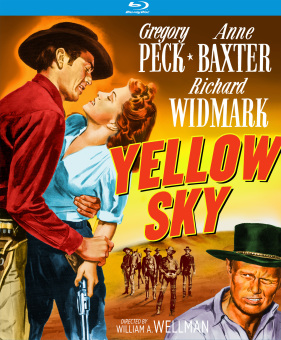 Arriving on Blu-ray to coincide with Kino Lorber’s release of The Ox-Bow Incident (reviewed yesterday), director William A. Wellman returned five years later to the grim sand-and-sagebrush setting of his earlier masterpiece with a similarly stark and psychologically incisive examination of group dynamics under pressure. This time, though, the motivating factor is greed as opposed to mob rule, and the landscape is a good deal more expansive and threatening than the dark valley of the Ox-Bow, yet somehow Yellow Sky feels lighter and more purely enjoyable in its sunbaked, arid qualities than the claustrophobic and chiaroscuro milieu of its predecessor. If the earlier Ox-Bow represented, as contemporary reviewer James Agee noted, “[controlled] artifice”[1], possibly at least partly due to its comparatively lower budget, then Yellow Sky‘s vast Death Valley backdrop – filmed mostly on that even-by-name threatening location – allowed director Wellman a broader canvas upon which to indulge the adventurous and romantic qualities eschewed in the original. 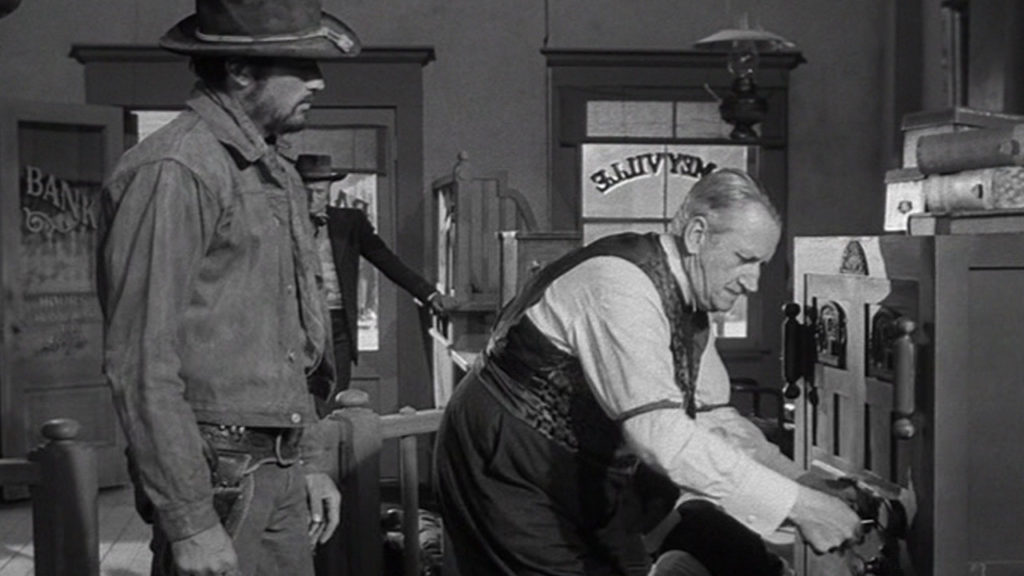 Opening, like Ox-Bow, with trail-covered saddlebums stumbling into a Western saloon to “admire” a similarly salacious painting hanging over a whiskey-soaked bar, the leader of Yellow Sky‘s larcenous sextet, played by Gregory Peck, is a grizzled renegade who – in the post-Civil War Southwest – is mainly concerned with violence and profit. After robbing a bank, being chased into the desert by pursuing army forces, and crossing the endless salt flats of the most inhospitable environment on earth – Death Valley – the gang, now reduced to a quintet, stumbles onto an abandoned town (“Yellow Sky”) inhabited only by a bewhiskered old galloot (James Barton) and his roughneck, though roughly fetching, gun-slinging granddaughter (Anne Baxter). Gradually uncovering the grandfather and granddaughter’s secret mining operation – the pair having prospected approximately $50,000 in gold – tempers raise, loyalties shift, and violence erupts within the querulous gang and between the suspicious outsiders and the ghost town’s testy grand-pair. And, as if matters could not worsen, the potentially explosive situation is even further complicated by the arrival of a roving band of fierce Apaches!

With shoot-outs, rivalrous fisticuffs, and decidedly un-PC-friendly “seductions” galore, Yellow Sky is grand old entertainment Writ Big, and plays like all the “fun” stuff left out of the earlier, more tightly focused Ox-Bow, while not stinting on the noir-like intensity and darker atmosphere of its forebear. As with their release of The Ox-Bow Incident, the visual quality of the Kino Lorber Blu-ray is greatly improved over any previous home video release, admirably showcasing celebrated cinematographer Joseph MacDonald’s low-angle skylines and cloud-coverings – easily familiar to those who know his earlier work on John Ford’s My Darling Clementine (1946) – with a stunning visual clarity that best reproduces what audiences must have seen in 1948. Also, according to the highly informative and entertainingly anecdotal commentary by William Wellman Jr. accompanying this release, the dust-ups, gales, and wind-storms that daily howl through the hot-bed inferno of Death Valley were recorded for all posterity by the inventive sound technicians – led by studio veterans Bernard Freericks and Harry M. Leonard – who worked with dogged determination under the harsh conditions of Yellow Sky. Along with Alfred Newman’s rousing, adventurous score (originally composed for 20th Century Fox’s 1940 production of Brigham Young), “Yellow Sky Wind” is used as aural background in films to this day, and both the score and its soundtrack effectively “surround” its auditor, in spite of its original monaural recording, on this worthy Blu-ray upgrade. 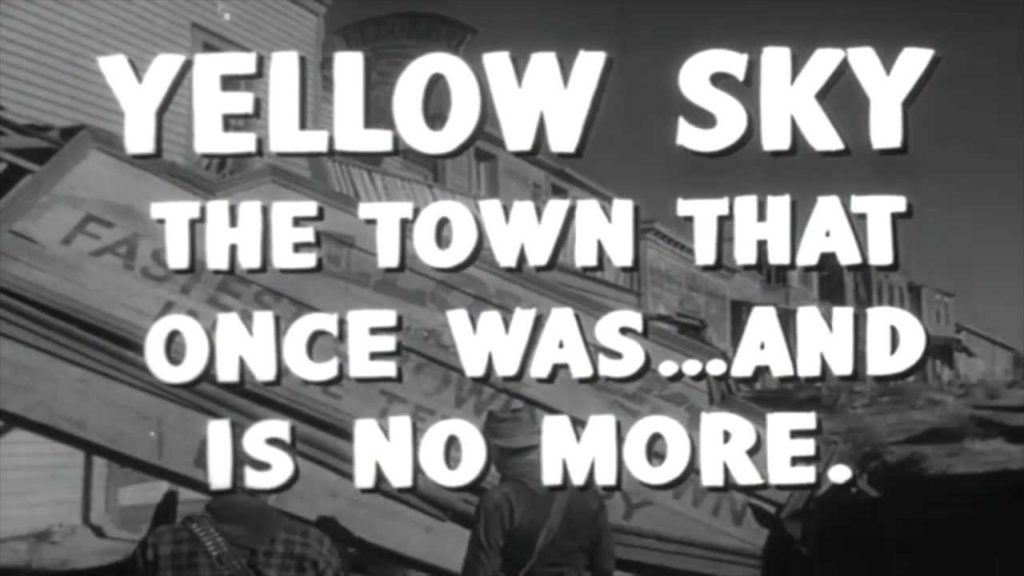 Reproducing an image from the film’s original poster of Gregory Peck, as “Stretch”, and Anne Baxter, as “Mike”, clinched in violent embrace on the Blu-ray cover – Richard Widmark, as the gold-lusting antagonist “Dude”, squinting and scowling in the lower-right corner – the tension, jealousies, and explosive conflicts of this decidedly “adult Western” are laid bare in the film’s very advertising. Similarly, the gallery of Western trailers contained in both The Ox-Bow Incident and Yellow Sky – including original trailers for both of the Wellman Westerns; along with 1955’s Man with the Gun, 1958’s Man of the West, and 1974’s Gregory Peck-starring Billy Two Hats – highlight a clear progression from the darker “Westerns Noir” of the 1940s to the darkly psychological Westerns of the 1950s to, finally, the gritty and historically critical Westerns of the 1960s and 70s. Originally escapist, adventure-oriented, Saturday Matinee-fare featuring uncomplicated good guys and equally uncomplicated bad guys, the Western gradually developed into a genre capable of dealing with darker themes and a more overtly pessimistic mood. William A. Wellman’s Western diptych of The Ox-Bow Incident and Yellow Sky are two masterful early examples of complicated genre fare that effectively broke with traditions of Westerns past.