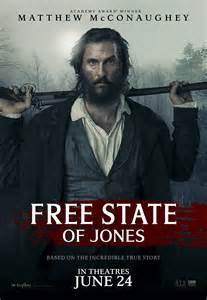 Outside a prominent courthouse, in a shot all its own, the Confederate flag comes down, and the United States flag goes up. There is a smattering of cheers. The scene is Jones Country, Mississippi in the 1860s. In real life, in 2016, this scene has played out in the same region, amid much festering conflict and passion, within the past year.

Free State of Jones presents itself as a racially charged U.S. history lesson, which it absolutely is, wearing some stark connections to the here and now on its sleeves. The film is imperfect, yes, and sometimes a bit of a sledgehammer. But then again, so is U.S. history.

It is the Civil War. (With Captain America nowhere in sight). We open on a squadron of worse-for-the-wear Confederate troops, already shellshocked and glassy eyed. We don’t know them, and we never will, but it’s clear they’ve already seen certain hell.

They march across the hillside, weapons in hand, as the camera rises to reveal the waiting Union opposition, just over the way. It’s an audience gasp moment, as we’ve already been efficiently sold on the humanity of these marching zombies, whatever their alligence. The order is given, and canon fire begins annihilating walls of these men. Again, “Fire!!” Again, death.

Immediate and pulling no punches, “Free State of Jones” instantly enters the pantheon of great Civil War films, despite its flaws.

Directed with impressive visual precision by Gary Ross (The Hunger Games, Seabiscuit), Free State is a large, grandstanding movie star vehicle for Matthew McConaughey in the classic Hollywood sense. Seeing how the film operates so earnestly in its reverence to its subject and commitment to its own sense of history, Free State of Jones plays like the kind of film Warner Brothers might’ve made in the 1940s. (Update: After typing this, I’ve come to find out that sure enough, Van Heflin starred in a name-changing fictionalized version of this story called Tap Roots in 1948. It was for Universal International). As a fan of that type of vintage filmmaking, viewing Ross’ film thusly opens it up to being not only a refreshing change of pace at the movies, but the key to a greater appreciation of it. 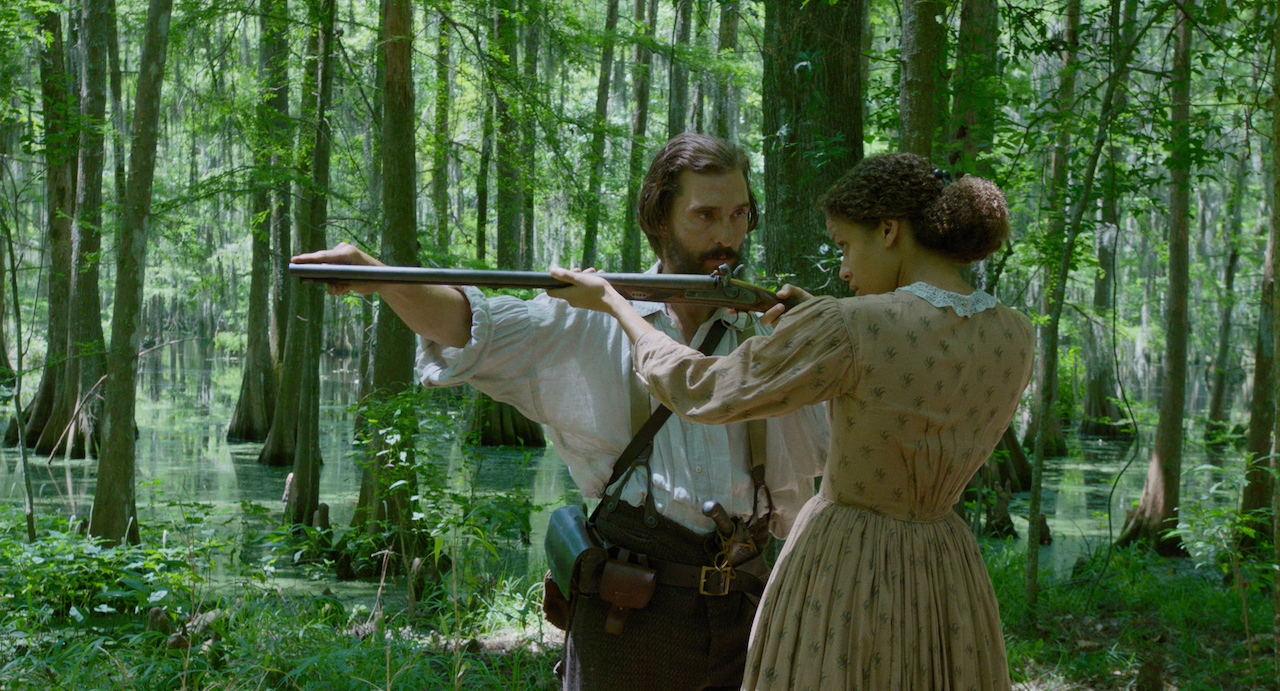 Shooting lessons for all in FREE STATE OF JONES. McConaughey with Gugu-Mbatha-Raw.

Immediate and pulling no punches, Free State of Jones instantly enters the pantheon of great Civil War films, despite its flaws. As the story of Newton Knight, a Confederate deserter turned anti-slavery revolt leader, the film functions well as a convincing look into the past while repeatedly reminding us that the unjust struggles of African-Americans continue to this day.

While the true motivations of the historical Newton Knight remain historically controversial, this film is content to present him as a bold man with answers and expertise. Reflecting the true story, McConaughey’s Knight gives many a rousing call to action, none more so than his four-point declaration of the “free state” of his hometown, Jones County, Mississippi. In the free state of Jones, all are equal and economic exploitation of the lower classes is forbidden. Even women and sometimes children are put to work alongside the men. This is a man of contemporary social justice Biblical faith (but good with guns) who’s only implied character flaw is his murky love life. A result of taking up with a freed slave named Rachel, played by the talented Gugu-Mbatha-Raw, is a mixed race linage in America’s Deep South. His great-grandson was a white man deemed one-eighth black – enough to brand him a criminal for marrying a white woman 85 years after the Civil War.

Flash-forward snippets of Knight’s grown great-grandson’s trial are occasionally peppered throughout Free State of Jones. While the attempted question of linage and possible “sins of the father” and “sins of the state” are appreciated, the interjections ultimately don’t work. They prove more interesting than effective, an unconventional device with little footing in an otherwise ultra-conventional film.

Yet, knowing your history is always a plus. When it comes to explaining the greater context of what’s going on, Free State of Jones has it both ways. On one hand, the movie refuses to contextualize certain things, even while repeatedly underlining the message that being black in the post Civil War south was a case of one damn thing after another: Broken post-Slavery promises gives way to “apprenticeship”, which is merely Slavery Part II. No sooner is that turned over than the Klan rides in. An exhaustion in absorbing it kicks in, and you realize that it should. 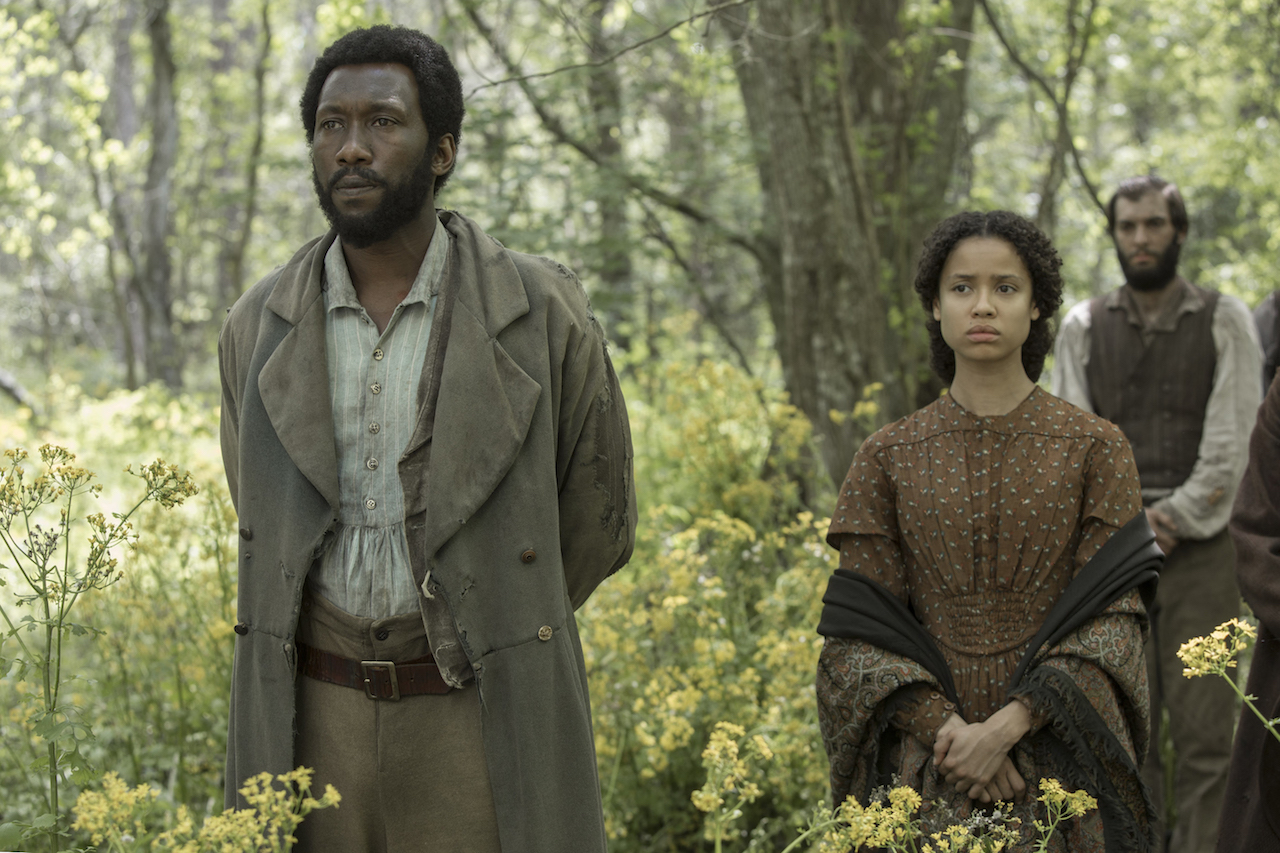 (L-R) Mahershala Ali and Gugu-Mbatha-Raw in FREE STATE OF JONES.

Yet, in terms of contextualize or lack thereof, we are told, for example, in the earlier wartime scenes that Vicksburg has fallen, but if you don’t already know the significance of that battle in the war, you’re that much more in the dark. For that reason, Free State of Jones‘ brightest future might be in high school classrooms, serving as a welcome supplement to formal history lessons.

Matthew McConaughey is once again terrific in this film, taking and holding the screen with the exact performance he’s being asked to deliver. His Newton Knight is McConaughey circa Southern Reconstruction, albeit with a stringy beard and greasy hair. In his more harrowed moments, he looks downright Frankenstein-like. Yet in this current sensitives-driven age of “hashtag-problematic”, his part in Free State of Jones will never get around the criticism that he’s another crusading white do-gooder in a Hollywood film running to the rescue of black folk. The film itself, however, is careful not to depict African-Americans as helpless and foolish. Mbatha-Raw’s character goes beyond the role of supported love interest (her lot in Concussion) to become an educator to the downtrodden. Mahershala Ali is impactful as the freed slave Moses (an apt name he’s chosen for himself) who works for social reform in his community.

Gary Ross has made quite the accomplished film, one part hornet’s nest, one part comfort food. It shows difficult truths while simultaneously propping up broadly agreeable social messages. Vulnerable characters tend to suffer badly, and dogs don’t fare too well, either. But history buffs as well as #BlackLivesMatter activists shouldn’t miss Free State of Jones, as it will, one way or another, further a vital conversation about race in the U.S., and beyond.