Buddy Comedy Dares to Be Stupid – and It Works 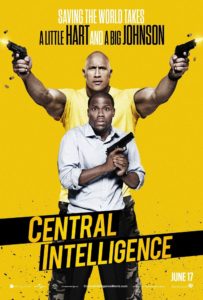 Finally!  A Kevin Hart comedy made me laugh!  After last year’s tepid The Wedding Ringer and the loathsome Get Hard I was beginning to think I would never enjoy Kevin Hart on screen.  But now, whether because of the script and direction from Rawson Marshall Thurber or because of chemistry with co-star Dwayne Johnson, Central Intelligence is a Kevin Hart movie that I can actually recommend.

The movie opens with a flashback to 1996 when Robby (Johnson) was a fat, bullied high school senior.  He’s dragged naked from the locker room into the middle of an assembly where Calvin Joyner, “The Golden Jet”, has just been named his class’s Most Likely to Succeed.  Robby is at the lowest point in his life, and Joyner is peaking. In the moment of Robby’s humiliation, Calvin shows kindness to him.  It’s the last they see of each other until it’s time for their 20 year high school reunion when Calvin, now a low level accountant married to his high school sweeetheart, receives a mysterious friend request from a “Bob Stone” on Facebook.  This is actually when I started to laugh, because Central Intelligence has some fun with the weird anxieties that social media brings into our lives.  Do you accept the friend request from a stranger?  If you don’t, will you somehow offend?  And what do you do if you accept the friend request and discover that your new “friend” is only interested in hooking up, hooking you into multilevel marketing, or – as seems the case in Central Intelligence – is straight up crazy. 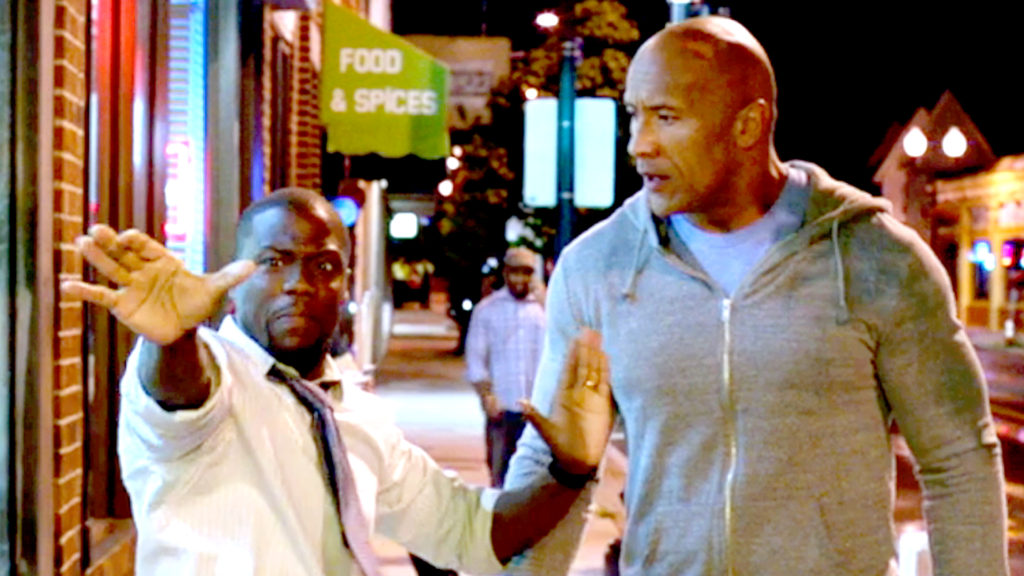 “Central Intelligence” flips the script of our expectations by having Kevin Hart play the straight man through much of the film.

Calvin is a decent guy, but frustrated with the trajectory of his life.  The towering, musclebound Johnson plays Bob as both sweet and manic, obsessed with the man he idolized in high school.  Accepting the friend request from Bob unleashes chaos in Calvin’s quiet life – but also (predictably) grows a friendship that is a path to self-discovery for both men.

Bob had hidden motives for contacting Calvin:  he’s a rogue CIA agent seeking the access codes to something or other that’s a matter of national security, and he needs Calvin’s skills as an accountant.  The access codes are a McGuffin, and only serves the comic plot – but that comic plot is a lot of fun.  Central Intelligence blends action with rapid fire jokes, some sharp and clever, some simply absurd (and absurdly funny).  The humor is not cruel or targeted at any particular groups, and the raunchy jokes are far fewer than we’ve come to expect in comedies in recent years.  As strange as Bob Stone is, with his unicorn shirt and obsessive love for Sixteen Candles, Central Intelligence doesn’t really make him the butt of the humor.  Hart’s character becomes increasing screechy and his mugging keeps pace with the action, but for the most part he’s allowed to remain recognizably human.

I left Central Intelligence thinking that the tone reminded me of Dodgeball:  A True Underdog Story – silly, absurd, broad; but not mean spirited or especially vulgar.  That similarity was not chance.  I didn’t know it when I was watching Central Intelligence, but it’s director and co-writer, Rawson Marshall Thurber, also directed and wrote Dodgeball.  I enjoyed Central Intelligence in the same way that I enjoyed Dodgeball – recognizing that it was often stupid, but laughing anyway.  Making a joke just dumb enough to get that laugh, and not so dumb that the only appropriate response is a groan – that’s no small accomplishment, and while Thurber doesn’t succeed every time he tries it in Central Intelligence, he succeeds often enough.

I should add that Dwayne Johnson is very good here.  Even in the face of gunfire he delivers many of his lines with a megawatt smile and a melodically cheerful voice.  It’s hard to know how much is strategy for Bob and how much is his being out of touch with reality, but it makes for a very funny performance.

Central Intelligence delivers a satisfying spy comedy/action movie/bromance, just the thing for a summer night at the movies.  It also restores my hope for Kevin Hart’s film career.