Music Takes a Back Seat to the Rock and Roll Lifestyle 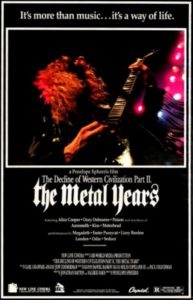 What shall I say about Penelope Spheeris’ rock-doc The Decline of Western Civilization Part II: The Metal Years? It was a very different viewing experience than its predecessor, which I reviewed a few weeks ago. The Decline of Western Civilization was filmed in 1979-80, exploring LA’s underground punk scene. It was a blast from my very own past, since I was listening to punk in my early-80s high school years – earnestly trying to reject materialism and conformity, hoping to smash the patriarchy and stick it to the man. In other words, Spheeris’ first documentary stirred in me feelings of warmth and nostalgia and empathy for of its subjects.

That was not the case with The Decline of Western Civilization Part II: The Metal Years. For starters, I was never a metal fan. The timeline still coincides well with my youth – the movie was released the years after I graduated from college, and I had many college friends (mostly male) who were into heavy metal. But there was little of it that appealed to me. Even if Iwas a metal fan, I’m not sure how I’d feel about this movie. In The Decline of Western CivilizationSpheeris humanized punk rockers at a time when they were considered a public menace, but she also seemed genuinely interested in their music. Several live performances were featured in their entirety in that film. In Part II the focus is much more on the sex and drugs than rock and roll. Music is minimized: several artists who are interviewed at length are not shown performing at all. Spheeris also chooses to mix bands hoping to make it big (Odin, London, Seduce) alongside interviews with already-veterans like Ozzy Osborne, Alice Cooper, Lemmy, Paul Stanley and Gene Simmons of KISS, and Joe Perry and Steven Tyler of Aerosmith. Ozzy is shown making breakfast (frying eggs like Darby Crash in Part 1, but in a much nicer kitchen). Many of these musicians were already clean, sober and rich at the time of filming; contrasting with the younger artists who seem to see excess as a necessary part of the artistic struggle. Or maybe some of them know that they’re not really “artists” at all.

I don’t want to be dismissive of music that I never “got” in the first place, but there is a lot of stupidity on display in The Decline Part II, and the desires of the interviewees seem so craven – more sex, more alcohol, more money, more fame – that it’s hard to take them seriously as musicians.

The Decline of Western Civilization Part II: The Metal Years feels manipulative, even if the results of the manipulation are unforgettable. Members of Odin are filmed in a hot tub (at Spheeris’ home), surrounded by beautiful girls, as the lead singer waxes on about how he wants to be as big as Led Zeppelin or the Beatles. It doesn’t take a crystal ball to realize that this is sheer delusion. Paul Stanley is filmed in overhead shots as he lies in bed, literally covered in women. Gene Simmons gives his interview in a lingerie shop (I should note that even in this crowd, both Stanley and Simmons seem like unusually self-absorbed jerks). The most infamous scene involves Chris Holmes of W.A.S.P. He is filmed floating in a hotel pool, drunk and getting drunker – pouring vodka down his throat and over his head – as his mother sits by and watches with an uneasy smile. After watching The Decline of Western Civilization I found myself worrying what had happened to Darby Crash, so I checked online: sure enough, he’d died of an overdose shortly after Spheeris completed filming. I had the same worries after watching Holmes in Part II, but I’m relieved to have since learned that he is alive, sober, living in France and still making music.

Amidst the vanity, teased hair, casual sexism and self-medicated braggadocio on display in The Decline of Western Civilization Part 11: The Metal Years, Lemmy, who died this past year, stands out as the real deal: plain spoken, dressed simply, interviewed with nary a groupie in site. His dignity in this crowd made me miss him all the more. The only younger artist featured who seems to see through the haze is Dave Mustaine of Megadeth, and perhaps not coincidentally, Megadeth’s song “In My Darkest Hour” bookends the movie. It’s evidence that metal bands could take the music seriously and produce a song that even I appreciate. Unfortunately, for both Spheeris and many of her subjects, The Metal Yearsseemed less about the songs and more about the lifestyle. 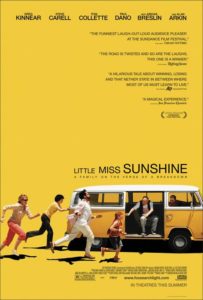 There’s been a glut of dysfunctional family comedies in the last 15 years or so. I blame Wes Anderson’s The Royal Tenenbaums(2001), which laid down a template for many inferior copies – and to be clear, I think Little Miss Sunshine is inferior. This alternately bleak and broad comedy about the Hoover family trying to get their awkward young daughter (Abigail Breslin) to a child beauty pageant lays the quirk on far too thickly. I still recommend it, though, primarily for its cast. It’s not just the solid performances from always-solid performers (Toni Collette, Greg Kinnear, Alan Arkin). This was one of our first clues that Steve Carrell could play it dark and low key, but the real revelation was from Paul Dano. I had never before seen Dano onscreen – as a teenage boy who has taken a vow of silence – and he broke my heart and blew me away. I knew immediately that this actor was something special, and Dano’s career since Little Miss Sunshine hasn’t disappointed.