The Psychology of Institutionalism and Power 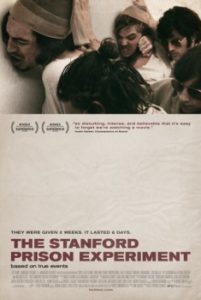 In 1971, Dr. Philip Zimbardo conducted an experiment at Stanford University where he and his staff recruited 24 male students who would each be paid $15 per day for their participation.  The 24 students are all given lengthy interviews to determine their qualifications to either be prison guards or prisoners in the experiment.  Ultimately, a coin toss determines which role each individual is given.

The experiment was to have lasted 1-2 weeks. Within the first day, the experiment sees the prison guards seeking to identify with their fictional roles by recalling the prison guards in Paul Newman’s film, Cool Hand Luke.  The prisoners, having been told that the guards will be unable to physical assault them, take confidence that they can reject the authority of the guards.  Very quickly, however, the experiment begins to establish very clear lines of delineation between the authority structures and the institutionalized.  This includes a panel of observers made up of Dr. Zimbardo (Billy Crudup-Almost Famous, Mission Impossible: III, Big Fish) and some of his colleagues who video tape the proceedings and act as a parole board for the prisoners and overseers for the guards.

The film boasts an impressive cast of Ezra Miller (The Perks of Being a Wallflower, Trainwreck), Tye Sheridan (Joe, Mud), Logan Miller (Ultimate Spider-Man), Michael Angarano (Almost Famous, Sky High), and Olivia Thirlby (Juno, Dredd). It is directed by Kyle Patrick Alvarez (Easier With Practice, C.O.G.), and the screenplay is from Tim Talbot (South Park, Chicago Fire). It methodically marches through the days of the experiment and the effect it begins to have on the prisoners, the guards, and Dr. Zimbardo and his staff. Given the interesting storyline, and the actual events it is culled from, The Stanford Prison Experiment seeks to drive the audience into the madness of the experiment seeing things the way that Dr. Zimbardo does.  And like the doctor, you may find that you can’t look away or put a stop to the madness, even if you should.

The cruelty of the events and of the staff members who are orchestrating the scenarios and projecting their own experiences and biases upon the experiment should make for a fascinating film.  The strength of the cast drives the film, and Billy Crudup shows once again that he is still an oft overlooked talent deserving of much more mainstream success. Tye Sheridan and Ezra Miller are both strong up and coming talents as well who are making solid career choices in terms of the roles they are taking.

In the end this is still a film that deserves a conversation.  A conversation about what it means to be human, the effect of institutionalism on both prisoners and people with power, and the morality of human experimentation even when done for the “greater good”.  The short number of days it took for this experiment to go from a simple psychological scenario in the hallways of Stanford University to full-blown abuse (psychological, verbal, physical, and sexual) is a scary reminder of the depravity within us all.

Given the right circumstances, we are capable of some truly horrible things.  We’ve seen the historical, systemic examples of Lord Acton’s famous phrase on absolute power played out.  This is a startling reminder, that even when the participants know it is a scenario, they are still capable of the depravity we might even claim to abhor. Are we that different?