Is This Series Roaring Back, Or On the Verge Of Being Extinct? 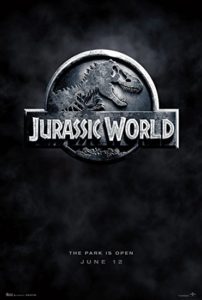 22 years ago, Steven Spielberg brought us Michael Crichton’s tale of dinosaur’s being brought back from extinction to populate an interactive park where the scientific miracle could be shared with all.  The dream of John Hammond (Sir Richard Attenborough) to share the magic and wonder of seeing these creatures in his “Jurassic Park” seemed to have died when a greedy employee put in motion a series of events that wrecked the park’s preview weekend and caused the entire thing to be abandoned.

The spirit of that original film, and the then state-of-the-art effects still resonate as one of the greatest popcorn films of all time, and visually are still impressive.  After two extremely sub-par sequels that squandered the child-like wonder and extreme terror of individuals being caught in a situation where they realize they don’t control the nature of these dinosaurs or the food chain, the new film Jurassic World will either provide another chance of redemption for the dinosaur franchise, or drive it finally to extinction.

On the whole, this new adventure is exactly what the franchise needs.  Set 22 years after John Hammond’s failed attempt, a man who was mentored by Mr. Hammond, named Simon Masrani (Irrfan Khan-Life of Pi), has attempted to accomplish and fulfill John Hammond’s dream. Using his vast resources, he has recaptured the island’s dinosaurs and has since built the theme park for the ages. Now called “Jurassic World”, the park is open and host to over 22,000 guests each day. All of the mistakes of “Jurassic Park” have been addressed, with strict controls to ensure that nothing will happen to endanger the guests.  As we learned in the original film, nature will find a way to overcome the controls we try to put in place. 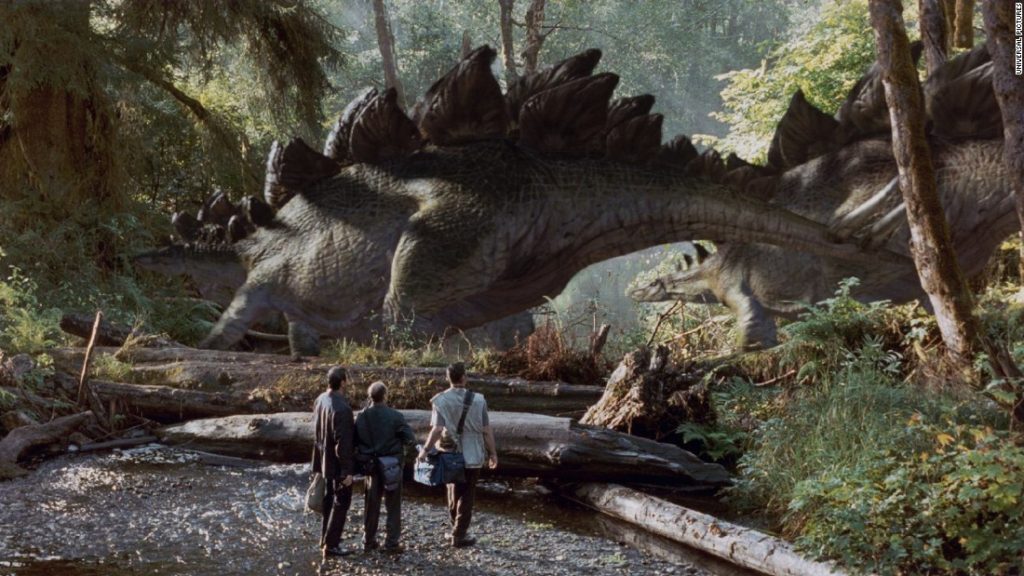 The themes of the original film about the greed of man interrupting the the progress of science are still here, though here science is itself corrupted by the innate human desire to reach too far.  Dr. Henry Wu (BD Wong-Jurassic Park) is back from the original film to guide the DNA creation of “Jurassic World’s” dinosaurs.  Now with a bottom line to consider, and the need to fight against people’s waning interest, “Jurassic World” is constantly trying to “up the wow factor” by creating hybrid dinosaurs.  This sort of mad scientist approach has led to a new species of dinosaur that is bigger, badder, and scarier than the previous ones on display.  They are ready to open this new exhibit, and even have corporate sponsors, so what could possibly go wrong. 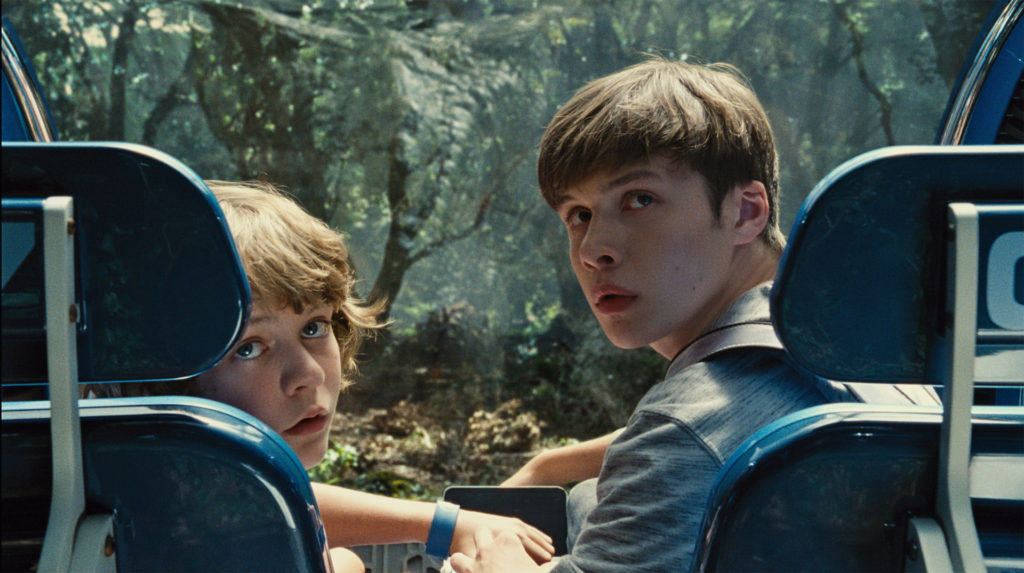 Like Jurassic Park, you’ll need to have some kids along for the ride.  Enter Gray (Ty Simpkins-Insidious, Iron Man 3) and his older brother Zach (Nick Robinson-The Kings of Summer) who are there to visit their aunt, Claire (Bryce Dallas Howard-The Help, Spider-Man 3, The Village) who is one of the top executives at “Jurassic World“.  She has virtually no relationship with her nephews and is not even able to be with them on their trip through the park due to the pressures of her job. 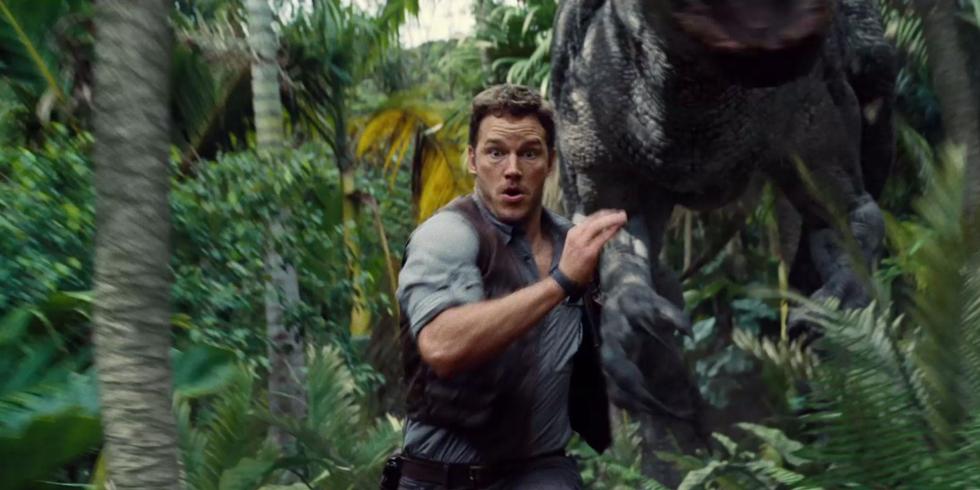 The star of the film, however, is Chris Pratt (Guardians of the Galaxy), a former military man, who is the top trainer of the Velociraptors who now, it seems, obey commands of their handler who is their “alpha”, since they are a pack species.  Vincent D’onofrio (The Judge, Full Metal Jacket) is a military contractor who has his sights set on militarizing such an animal that can follow commands.

All of this set up puts in motion a series of events that remind you what you loved about the original film, and what everyone hated in their terrible sequels.  The visual effects, while missing Stan Winston, were state-of-the-art and really brought the audience into this fictional world.  Set against the real-life location of Hawaii (subbing for an island off of Costa Rica), it had a very organic feel that is refreshing in the world of CGI where so much is shot against green screens.  That being said, plenty of CGI and green screen effects are used, but director Colin Trevorrow (Safety Not Guaranteed) keeps things mostly grounded. 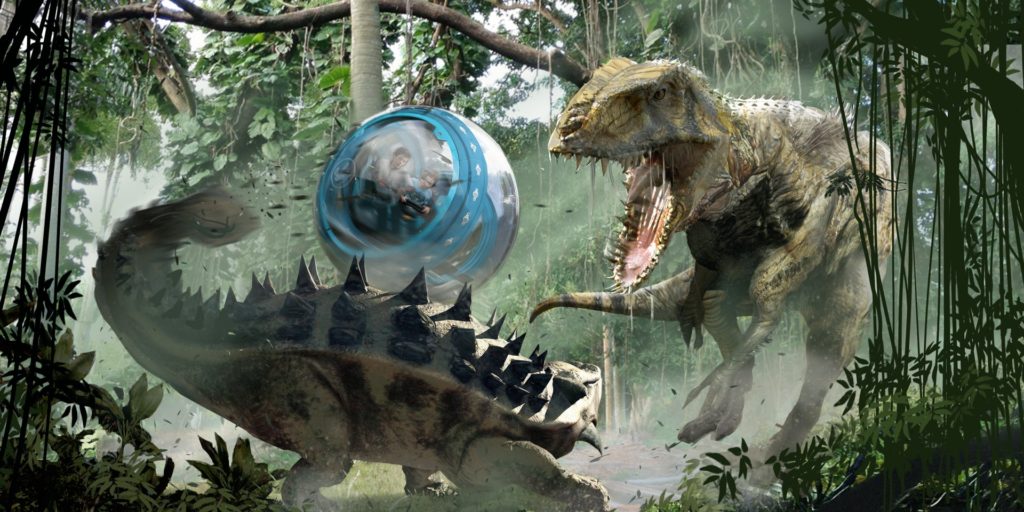 I saw the film in IMAX 3D and it was an effective format for immersing the audience into the action, especially during some of the dinosaur attacks, and the fly over shots of the island.  The action is mostly fast paced once it gets going, and Colin Trevorrow does a good job of not rushing into the action too quickly.  Still, this is a fourth film in a series, so he relies on the familiarity we might have with this world and ends up bypassing some moments to build a deeper story.

What is ultimately missing from this story, apart from Jeff Goldblum, however, is a piece of the heart of the original that only Steven Spielberg was able to infuse as a director at that time of his career.  While still making very strong films, as a director Spielberg has left much of the child-like wonder he used to portray in his projects in order to pursue more weighty affairs. These are films which are equally as excellent in terms of craft, such as Schindler’s List, Saving Private Ryan, Munich, andLincoln as examples, but lack the fun, adventure, and terror of his earlier work like Jaws, Raiders of the Lost Ark, or Close Encounters of the Third Kind.  Even with Spielberg as a producer, those touches he does as a director cannot be replicated. 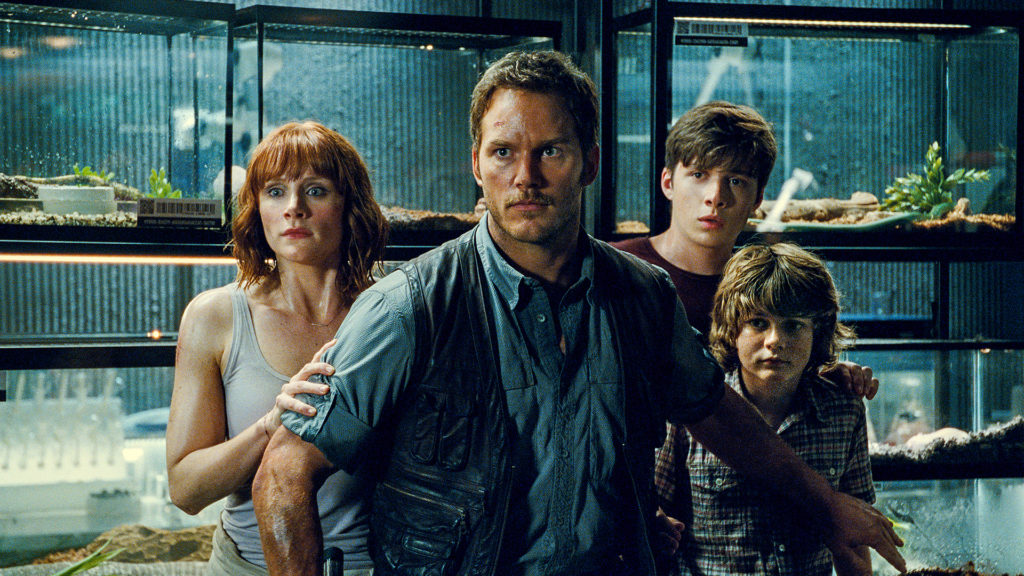 The script is pretty simple and while it moves quickly for the most part, and returns to the same feel and theme of the original story, it ultimately is shallow in the sense that it is just following the typical studio sequel mantra of bigger, better, faster.  Like the misguided science in the film that leads to them trying to “up the wow factor” to retain interest, the studio has done the same in order to top the original film’s dinosaur bad guy.  By the time you reach the climax, you realize that just making a new dinosaur that is louder, bigger, and more complex is a pretty shallow premise to hang a $150 million dollar film on.

Fortunately for Universal, Trevorrow is able to overcome the shortcomings of the film’s script to deliver what most audiences want out of this franchise.  Tack on a mostly effective cast, good effects, and solid action scenes that harken back to the sense of wonder and fear we had when we saw the original, and you get a film that will mostly infuse new life into a dino-franchise that was teetering on the brink of extinction.  And like the humorous easter eggs scattered throughout the film of the marketing bonanza that was Jurassic Park, Jurassic World should prove to be equally as profitable.  And for a summer tentpole film, Jurassic World mostly delivers.