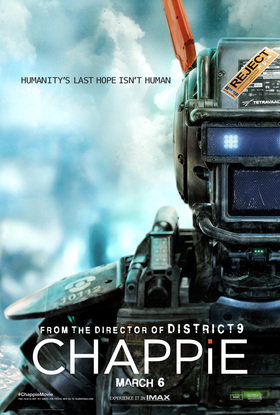 The lovable robot has a long, if uneven, cinematic history. From Robbie to Johnny-5, from Bicentennial Man to that dreamy eyed guy from I-Robot, they’ve been used as vehicles to examine what constitutes our humanity. There have also been plenty of robots as loud, bone crushing machines of destruction – moreTransformers and Pacific Rim, less Wall-E. Neill Blomkamp somehow manages to invoke both streams of robot history with Chappie. Unfortunately, it’s a bit more Michael Bay than Iron Giant, even with a plot that hinges on Cartesian mind-body dualism.

Blommkamp created one of the finest sci-fi films of this century with District 9, and Chappie is set in the same garishly decayed Johannesburg. Poverty, crime, overcrowding and bureaucratic failure are repeated themes but this time crime is on the decline due to the use of robotic police “scouts”, designed by an A.I. whiz kid, Deon Wilson (Dev Patel).

Deon’s holy grail is not just intelligence, but sentience, and when he finally perfects consciousness as a program he drops it into the battered soon-to-be-junked body of a police scout. That’s Chappie, who is “born” as a baby but learns quickly. 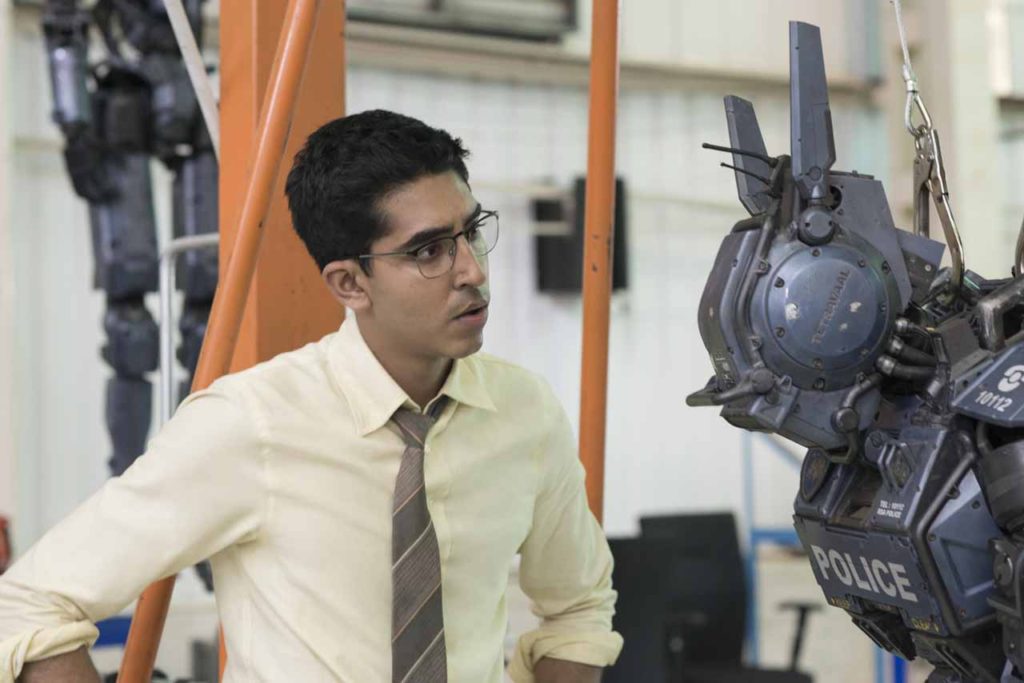 Unfortunately, the very day that Deon sneaks Chappie (not yet conscious) out of the weapons company he works for, he is kidnapped by some dimwitted criminals who want the ability to shut off the police robots who have been interfering with their livelihood. Blomkamp is a fan of South African rap-rave group Die Antwoord, and cast two members in central roles as gun-happy Ninja (Watkin Tudor Jones) and otherworldly Yolandi (Yo-Landi Visser). Their gang is rounded out by Amerika (Jose Pablo Cantillo), and it’s under their watchful eyes that Deon brings Chappie to life. If they can’t shut down the police army, perhaps possessing a teachable robot is the next best thing.

Ninja, in particular, is an unlikeable thug, but he’s not the villain of this movie. That would be Vincent Moore, played by Hugh Jackman with a mullet and an ensemble that makes him look like the Crocodile Hunter. Jackman has a mercenary motive for wanting Deon’s police scouts to fail, but he also has a superstitious revulsion at the idea of a sentient robot, making Chappie his chief target.

The movie unfolds in a matter of days, with Jackman intent of destroying Chappie; Ninja focused on prepping him to commit the perfect heist; and Deon and Yolandi trying to nurture his personhood. 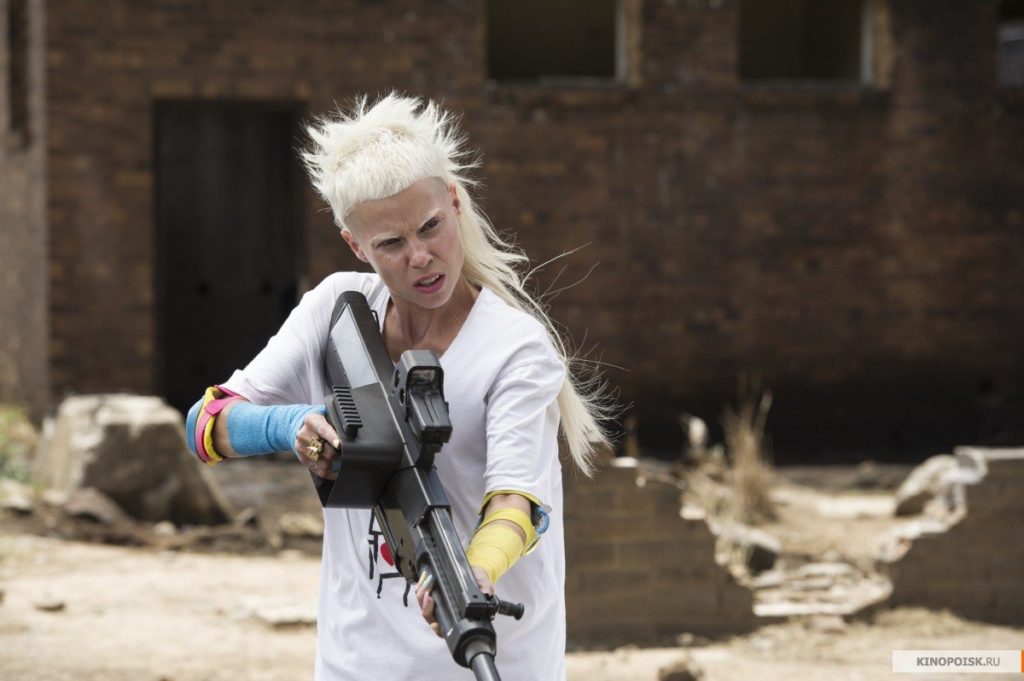 As for Chappie (motion captured by Sharlto Coply), he is a bright, easily manipulated child in a bot body and his quest is simply to survive – a goal complicated by his damaged frame.

It’s here that the mind-body duality comes into play. Chappie is convinced (rightly, as it turns out) that his personhood is located in his consciousness – which he defines as an energy. If he can simply extract it and download it to another body, life will continue.

Can it really be that simple? Is the soul a substance? Does it have a thing-ness that can be transplanted from one place to another? Is consciousnes all that really matters, and the body simply something to carry it around?

Descartes thought so; essentially locating personhood in our ability to think. So have gnostics throughout history who consider the spirit the only real value, and the flesh simply a necessary – and temporary – nuisance. Christians and materialists alike have rejected this idea: Christians believing that we are created as inextricably embodied beings (hence the importance of the doctrine of resurrection), and materialists convinced that the “I” is simply a function of physicality. Shut down this body, and I am gone, solid gone. 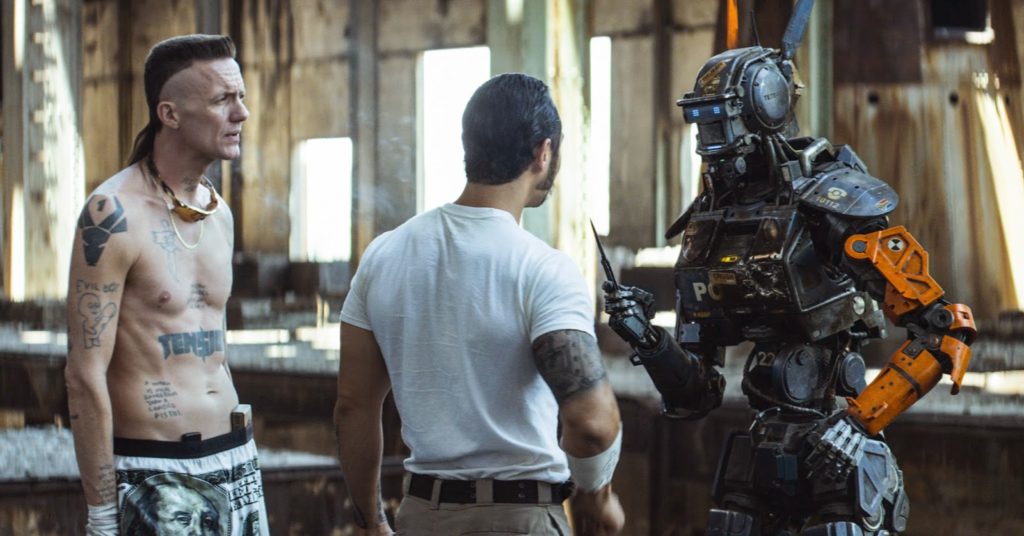 To spend too much time on this subject would be to mislead you about Chappie, however. Questions of sentience and ontological being have been better handled by Data on Star Trek: The Next Generation. The responsibility of “the Maker” to the one made was addressed with far more gravity in Blade Runner. Chappie only skims the surface of these questions. Even Deon’s view of sentience as the ability to produce and evaluate art seems reductionist. “Don’t let them stifle your creativity, Chappie!” he shouts, after a painting lesson is cut short.  He only left off the mantra of countless Disney movies:  “Believe in yourself!”

Even more superficial is Chappie’s treatment of the significance of embodied life. Faced with the choice to die or to live on in an entirely mechanized body, a human character doesn’t even hesitate. Really? Do our senses, our flesh and blood life matter so little to us? 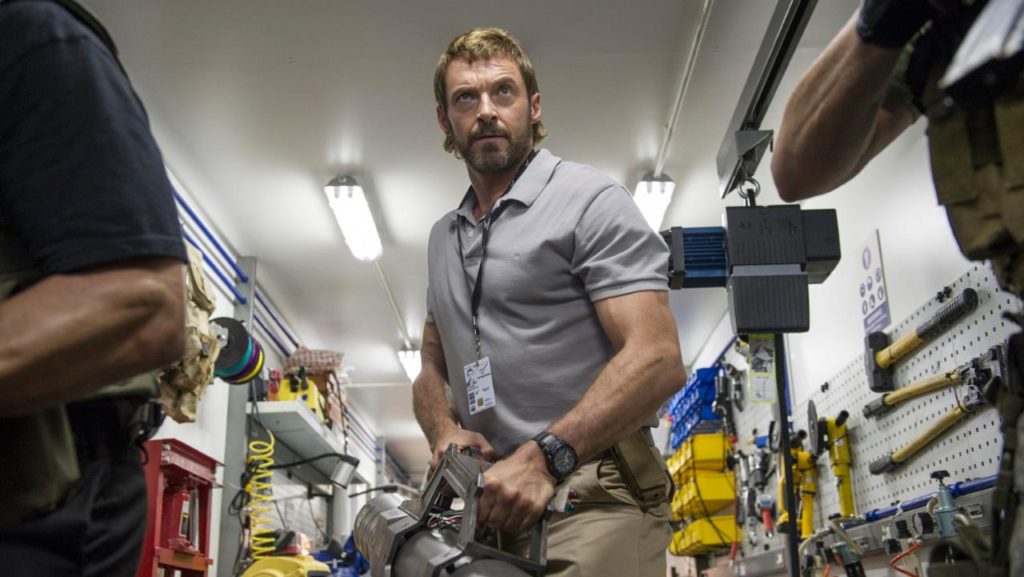 Chappie is ultimately thematically lightweight, and the visual style is a throwback to the lurid, stylized destruction of movies like Mad Max, Total Recall and The Fifth Element. Those comparisons are also where it’s charm lies. I was initially nothing but disappointed in Chappie, hoping for the weight and resonance of District 9. But like some casseroles, I think Chappie may be better the next day. The longer I sit with its post-apocalyptic punk rock aesthetic, exaggerated characters and intervals of mayhem and explosions, the more I like it on its own (admittedly escapists) merits. Coply’s Chappie is a frantic, precocious, eager to please child. He is winsome, but not precious – and when angry enough, he is capable of becoming the weapon he was built to be. Jones is Chappie’s grotesque but oddly watchable “Daddy”, and Vissar plays her role like a decadent garden fairy. As a side note, her instant attachment to Chappie is one of the least believable elements in a not particularly believable movie. Seeing her snuggled up next to a man-sized mechanized body, reading Chappie a bedtime story and telling him how much “Mommy” loves him, I couldn’t help thinking that Yolandi was working out some kind of deep psychic wound. Still, movies have offered more dysfunctional families than this – and if Ninja and Yolandi never quite become criminals with hearts of gold, they at least step up when it matters most.

The movie’s real weak spots are Jackman, whose chortling glee over doing evil is as cartoonish as the He-Man clip that Chappie is seen watching; and Patel. Deon is not an interesting character to begin with, and Patel’s performance alternates between flat and silly.

Go see Chappie in the same spirit in which we watched the funny, violent, colorful sci-fi movies of the 80s and 90s. On that level its chaotic, incendiary fun. Just don’t expect a soulful meditation on the meaning of personhood. Blomkamp hasn’t made that movie; at least not this time.