Fleeting Time in the Hands of its Fairy Tale Creators

“I wonder. I ask myself whether or not these exhausting days may not be the sweetest of my life. For they are filled with friendship, harmless quarrels, laughter and contain moments when we seem to hold fleeting time in our hands.” 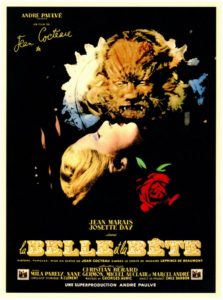 Though, as recounted in his Diary, its filming was far from smooth—encompassing illness, injury, and inclement weather in a period of austerity immediately following the second World War—Jean Cocteau and his dedicated collaborators succeeded in wresting screen poetry from the difficult circumstances of its production. Beauty and the Beast, based on the traditional French fairy tale first recorded in the mid-eighteenth century, effortlessly transforms its viewers into children who, as the preamble (written in Cocteau’s own handwriting) informs us, “believe that a rose plucked from a garden can plunge a family into conflict… believe that the hands of a human beast will smoke when he slays a victim… [and] believe a thousand other simple things.” Cocteau, along with decorator and designer Christian Bérard, cameraman Henri Alékan, and a host of other artists, technicians, and performers, created a timely fantasy for grown-ups still capable of being transported to the Long Ago and the Far Away by those “four truly magic words, childhood’s Open Sesame: Once Upon A Time…”

Which is not to say that the film, frequently singled out as one of the greatest ever made, is in any way cute, cloying, or precious. Quite the opposite. Cocteau’s strategy is one of reality and verisimilitude to the world(s) he creates. Opening with a pair of young wastrels “at play” with arrows outside the family cottage, the scene of domestic strife that follows—the reflection of wasted youth in hard-scrubbed floors, jealous siblings abusing drunken servants, a rejected proposal that ends with a hard sock in the jaw, a fleet of ships carrying the family’s fortune failing to come to harbor—is as flat, prosaic, and earthy as the film’s famed image of a labyrinth of bedsheets hung to dry in the cool, country air. So when the film moves into another world of darkness and mystery—where, for the unfathomable transgression of a stolen rose, the embodiment of innocence is pledged to a monster—the style and import of its telling organically prepares its viewers for the wonders and delights of doors that open with unseen hands, disembodied arms that emerge from walls holding candelabras, and statues that turn to coolly regard weary travelers. We believe both worlds because they appear “true,” devoid of sentiment or jarring falsifications.

Which brings us to the Beast (Jean Marais); who, with his lion-like head and talon-like claws ensconced in white ruffles and torn finery, cuts a fearsome, impressive, and ultimately sympathetic figure to quicken the pulse—first in fear and disgust, then awe, and finally affection—of any good-hearted Beauty (Josette Day). Compared to her wicked sisters (Mila Parély, Nane Germon), her ne’er-do-well brother (Michel Auclair), her kind but weak father (Marcel André), and her oafish suitor (Jean Marais in a second role), the Beast, roaming the palaces and parks of his enchanted estate lost and forlorn, is by far the most human figure encountered in Beauty’s world. Existing as he does outside the natural order of things, the Beast draws Beauty into the realm of magic and enchantment as a lone and terrifying creature—separating and isolating her from her family and friends, placing unyielding demands upon her affection—but like the world of story, which likewise first appears dark and threatening, the Beast proves all the more tantalizing and attractive for the gentler qualities beneath its rough exterior. And thus the appeal of the fairy tale!

So when the statue of Diana, who guards the glass dome wherein the Beast’s magic lays, dispatches an intruder–who, I should add, is Beauty’s human suitor–with the doubting lad’s own preferred form of weaponry, that of an arrow, and the intruder–nay, interloper–falls to the snow-swirling depths of the magic encasement, should we viewers of the fairy tale be surprised that his handsome aspect instantly transforms into that of the Beast’s? And should we fairy tale viewers accept that, simultaneous to the jealous suitor’s ignoble demise, a “loving look” from Beauty has lifted the curse and transformed the Beast into the Prince (Jean Marais, again, in a third role)?

If, thus far, we have believed an embroidered glove can magically transport its wearer across distances only separated by an inability to imagine one’s destination, that a shining white steed—appropriately named “Magnificent”—can likewise fly across vast reaches of space, that a tear honestly shed can transform itself into diamonds, that a mirror can reflect its viewer’s inner being, then it would indeed seem appropriate that said “loving look” could lift a family curse and, with a reverse trick shot, literally spring to life from what lay dead, and thus restore the former Beauty of a Beast.

And it is here, during the Beast’s transformation, that the film’s first jarring note is introduced and the fairy tale begins to crumble: we, the fairy tale viewers, read disappointment in Beauty’s eyes. With his white silk pantaloons, ostrich-feathered hat, and pomaded, wavy hair, the new-found Prince may indeed be beautiful, but we, like Beauty, miss the Beast.

But the moment passes, Beauty is literally swept off her feet into the stratosphere, and the Prince and Beauty consummate their passion in a swirling cloud pathway to a new life and new kingdom. Off to a Third World we fairy tale viewers will never be witness to: that of, here unstated (but implied), the Happily Ever After.

Across space, time, and dimension—properties unique to film, I should again add—the best of all screen fantasies truly succeeds in making child-like believers of us, its viewers, and, with its creators, we in the act of watching do seem to hold in our hands something that is fleeting, yet true. 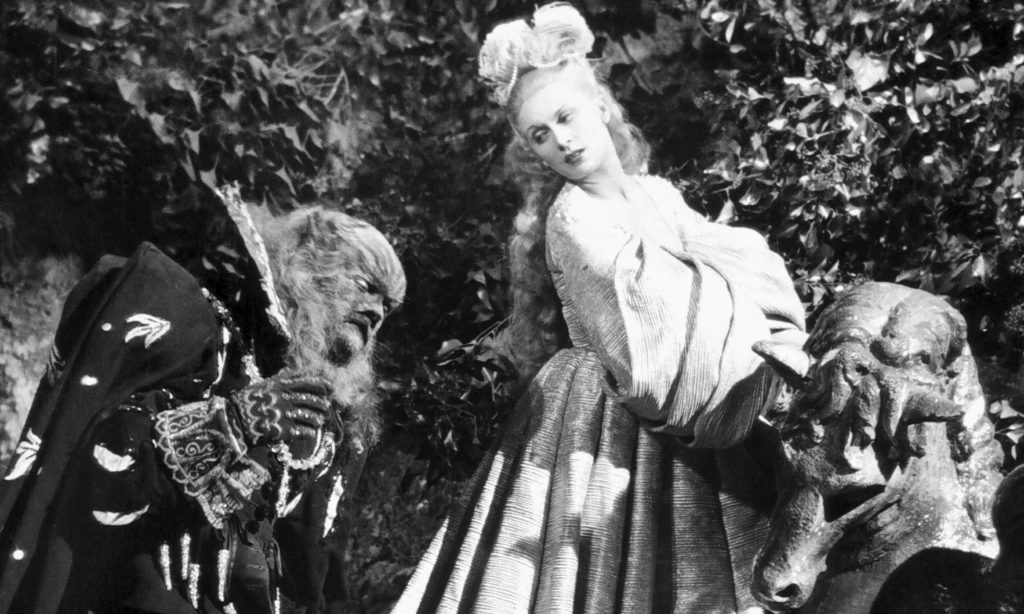