NIGHT AT THE MUSEUM: SECRET OF THE TOMB – Film Review 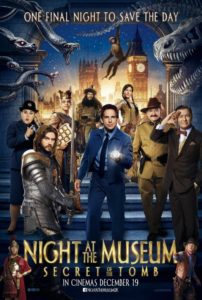 When director Shawn Levy and Ben Stiller discussed their plans forNight at the Museum, the plan was to end it after the 3rd installment.  With the new release, Night at the Museum: Secret of the Tomb, this series is drawing to a close.  Shawn Levy has said that this film was “always going to be about farewells“.  This is made even more bittersweet for the audience knowing that it is also the final large production film we will see Robin Williams in following his death this year.

For those who are uninitiated in this series, Ben Stiller plays Larry Daley, a man who was trying to find a job and some stability so that he could continue to have a relationship with his son, Nick, who lived with his mother.  Larry secures a nightwatchman position at a New York Museum where everything mysteriously comes to life at night because of a golden tablet found in the Egyptian tomb of Mehrenkahre and his sons.  In the original Night at the Museum, we meet Ahkmenrah, the son who helps Larry stop the plot of the aging and recently fired nightwatchmen (played by Dick Van Dyke, Mickey Rooney, and Bill Cobbs) to rob the museum and steal the tablet.  In that film we were introduced to a cast of characters including a wax version of Teddy Roosevelt (Robin Williams), Sacajawea (Mizuo Peck), Dexter the monkey, Attila the Hun (Patrick Gallagher), and two miniature figures named Jedediah (Owen Wilson) and Octavius (Steve Coogan), who are meant to be depicting the old west and ancient Rome.

For the second film, the museum curator (Ricky Gervais) is shipping most of the exhibits and figures of the museum to permanent archives at the Smithsonian in Washington, D.C., where they will be boxed up for good.  Larry, who has gone on to do informercials for his new company’s products seeks to rescue his pals so that they can continue to come to life.  At the Smithsonian we meet the other Egyptian son Kahmunrah (Hank Azaria) who wants the golden tablet for his own world domination plot. Eventually, the gang is able to return back to New York thanks to a rich benefactor (Larry who sold his company) who insists that the exhibits be reopened.

The third film delves more into the origins of the tablet and how it came to be in the museum.  We also learn that its power is waning.  If the tablet can no longer wake up the figures at the museum, then every last one of them will cease to be able to come to life.  To solve this, Larry arranges to bring the tablet along with Ahkmenrah, Teddy Roosevelt, Sacajawea, Dexter, Attila, Jedediah, and Octavious to London under the guise of a shared exhibit between the London Museum and the New York Museum.  In London, on exhibit is Ahkmenrah’s parents, Mehrenkahre (Ben Kingsley) and Shepseheret (Anjali Jay), whose help Larry needs since they know the secrets of the tablet. 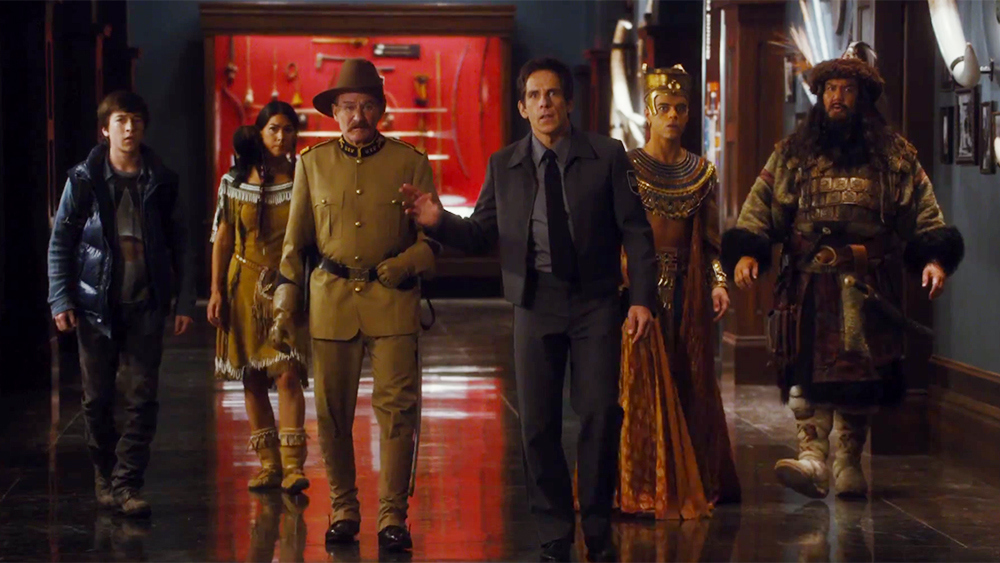 While not rising to the same level as the original, Night at the Museum: Secret of the Tomb is a fun film for the family that is much more streamlined than the more chaotic second installment, Night at the Museum: Battle for the Smithsonian.  Here, knowing the series is about farewells, there are fewer new characters introduced allowing for the audience to enjoy their favorites from the previous films.  The main new additions are Sir Lancelot (Dan Stevens), Mehrenkahre and Shepseheret, and a new caveman named Laaa who looks just like Larry (and also played by Ben Stiller) which is played for comedic results.  The nightwatchman at the London Museum is Tilly, played by Rebel Wilson.

Robin Williams has a much bigger role and was given several scenes by which he could break out of the Teddy Roosevelt persona and just “do his thing”.  With the tablet messing things up, the characters go a bit heywire which allows for Williams to do impersonations, different voices, and even act like he is being fast-forwarded.  It was nice to see him being funny again after the darker characters he has played recently such as A Merry Friggin’ Christmas, The Angriest Man in Brooklyn, and World’s Greatest Dad.  There is also a great scene where Larry catches up with the former nightwatchmen.  Dick Van Dyke breaks out his dance moves, and we get to see Mickey Rooney in one of his last roles before he died earlier this year. 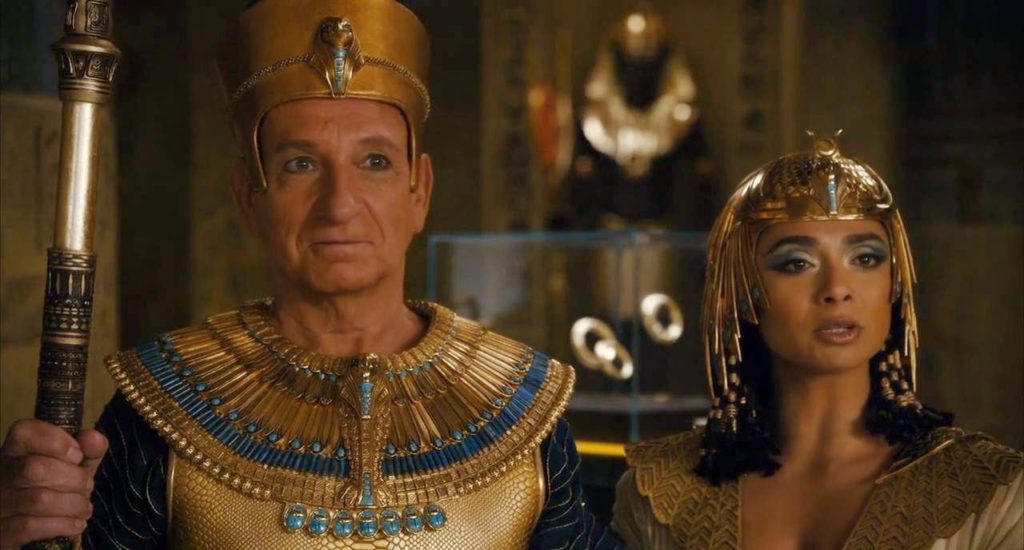 Like Exodus: Gods and Kings, there is too little of Ben Kingsley in this film. There is also the typical juvenile pranks of monkeys slapping and peeing on people, as well as classic bits from the series such as the tiny miniatures, Jedediah and Octavius, feeling the noise and effect of every bit of wind while a wider camera angle reveals complete silence for normal size humans.

The comedy team of Owen Wilson and Steve Coogan is still one of the stronger parts of these films, and I would be curious to see what they could do in a different film as sort of the odd couple to what Owen Wilson and Vince Vaughn typically have when they are paired together.  Steve Coogan continues to turn out interesting projects such as The Trip, and The Trip to Italy, as well as last year’sPhilomena. 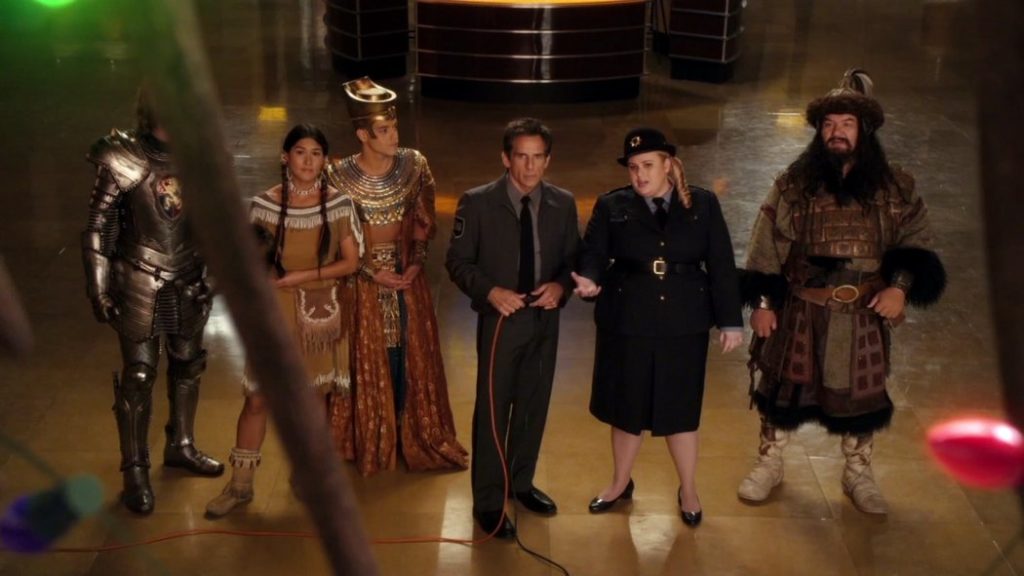 In the end, all things must come to an end.  Shawn Levy’s Night at the Museum series, has mostly been a fun, light-hearted romp that has allowed for kids and adults alike to be entertained by historical figures that would never find their way into the same story otherwise.  And while these films are finished, surely there are more adventures to be had.  And while parting can be such sweet sorrow, and in the case of Robin Williams and Mickey Rooney a permanent one, it is good to know that a film such as Night at the Museum: Secret of the Tomb can point us in the direction of hope and say, as Robin William’s Teddy Roosevelt does, “Smile….the dawn is coming!”